Another quiet week with the fishing still in the doldrums and reports from commercial boats up as far as Lowestoft suggest that they are struggling to find any cod at all and fish markets are now having the illusive cod shipped in from further afield. The signs are really not looking good for the future. 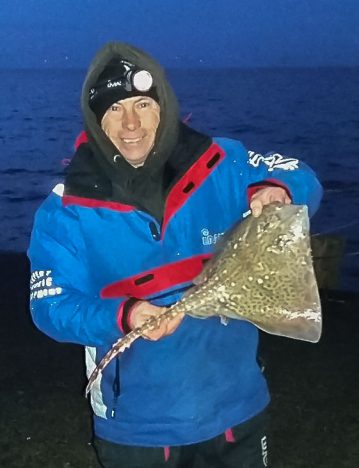 Michael Lloyd with one of his thornback ray from Clacton Pier

On a brighter note this week the thornbacks have turned up again mostly for the pier anglers but there are one or two being caught on the beaches as well.

Colchester Sea Angling Club headed for the Suffolk coast to fish the Aldeburgh beaches for their first match of the new year. 14 anglers fished over high water in this 5-hour match and the fish were feeding from the start, once again mostly small whiting and dabs were caught, but everyone caught fish.

Top rod on the day was Martin Close with 4lb 7oz, second place went to Gary Hambleton with 3lb 13oz and while third place Mick Bradley weighed in 3lb 7oz. The heaviest round fish prize was shared between Bill Paquette and Chris Mills with an 8oz whiting. Mark Sessions won the heaviest flatfish prize with a dab also weighing 8oz.

Their next match is the Annual Dab Challenge on the Sizewell beaches on February 12th fishing 10am to 3pm.

When we are struggling to find any sizable fish to catch Clacton Pier can always turn up some decent catches and so it proved again this week. Local angler Michael Lloyd fished here at the weekend and he landed a staggering seven thornback ray plus dabs and whiting. Mick told me that the rays were all caught on squid and herring baits.

The Holland beaches have been quiet but anglers have been few and far between, and those that have fished have caught small whiting and dabs, although there have also been a few small thornbacks caught here this week. All our local beaches are fishing in a very similar mode with just very small whiting and this also goes for the Frinton and Walton beaches.

Walton Pier should improve by the end of the month, but at the moment it is very patchy and once again small whiting predominate.

To sum up, the fishing on our part of the coast so far, this year has to go down on record to be one of the leanest in recent years, with charter and private boats not catching any cod at all and beach anglers struggling to catch a sizable fish. The up side is that as spring arrives and warmer weather (hopefully) we will see an upturn in thornback ray and dogfish catches along with the first of the bass.