Consider spurdog as an individual shark specie and it’s not difficult to gauge why once fantastically healthy UK populations have been so gluttonously damaged by unchecked exploitation. Very marketable table fare, they congregate in large shoals in waters where commercial longline vessels have ruthless unfettered access. The spurdog, or spiny dogfish as they are also known, can live to 75 years and weigh over 20lb, and a double-figure spurdog is almost certainly 30 years old. The females ‘pup’ together, and have a gestation period of two years. Populations of this shark have dropped so low it now lists as a ‘critically endangered’ creature alongside others knocking on for extinct like the Giant Panda. 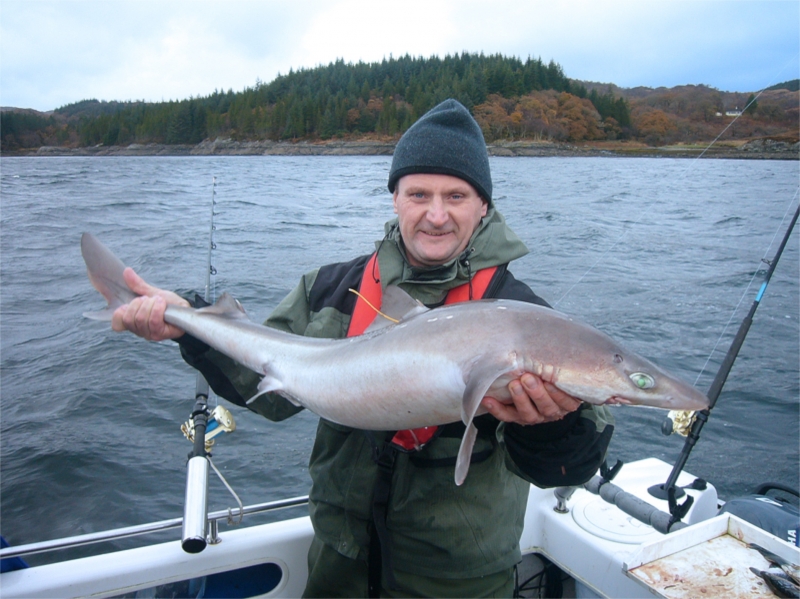 Yet with spurdog teetering at 5% of their original biomass, and strong evidence from anglers suggesting waters in and around the Scottish sea lochs of Sunart and Etive support unique breeding populations, Scottish Cabinet Secretary Richard Lochhead and the Marine Directorate remain to be convinced. They say further evidence is required before they will move to take any protecting action. To help facilitate this, the SSACN established a tagging program; hence the Tagathon weekend was born. Sunart is something of a second home for me, so I ‘tagged’ along to watch events un-fold. The primary aim of this weekend was to tag as many spurdog as possible from the shore, boats and even kayaks in a concerted effort to provide the politicians with evidence that these lochs hold specific resident populations of spurdog. In turn, the hope is that effective protection measures will be introduced, while also raising public awareness of the urgent need for shark, ray and skate protection in Scottish and wider UK waters.

Horizontal rain and an unruly sea caressed by regular whitecaps greeted the 60 anglers gathered at Resipole Caravan Park slip for the SSACN organised Spurdog Tagathon event on picturesque Loch Sunart, which nestles between the Morven and Adnamurchan peninsulas. It wasn’t exactly angling weather but at least it wasn’t snowing, and commitment to the cause meant nobody shirked the fishing. With tagging kits issued anglers shared information on the finer points of safe tagging. SSACN Secretary Denis Kelly, Adam Riach and I would be fishing on ‘OnyerMarks Too’, skippered by Mathew Burrett. 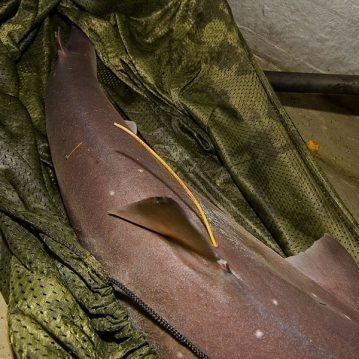 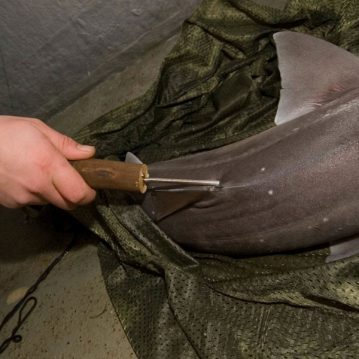 Boats including Les McBride’s ‘Hellraiser’ blasted straight down the loch heading for favoured marks. However, with such atrocious weather conditions, nobody dared venture much further than the confines of Resipole Bay on the northern side of the loch during these early knockings. My old man John Cumming and his buddy Paul Spooner – mad as brushes they are – had driven a few miles down to Laga Bay to launch in their kayaks, where we hoped to join them later if indeed the weather improved as forecast. John played down any interest in actual fishing, claiming an inclination only to get some interesting photographs angles. As might be expected, I know the old devil well and I suspected he and Paul had something up their sleeves. The VHF radios on the boats crackled into life within the first hour, with fish successful tagged and released all around.

The spurs were generally of good quality fish, with plenty of excellent specimens in the 15-18b class. Smaller baits were accosted by lesser spotted dogfish. I landed 20 of the blighters before switching to a large half mackerel for bait… which sadly didn’t deter them in the slightest. Les on ‘Hellraiser’ experimented with arctic char as bait and was rewarded with a cracking spurdog of just over 15lb. At the same time reports filtered over the radio of large spurs to 17lb to boats dotted elsewhere in the loch. The best fish among a series of superb early specimens was a 21lb beast for Ayr SAC member John Wilson – and no this particular bloke doesn’t laugh like a demented hyena! John’s fish would have burst the British and Scottish records had it been killed to make the claim. 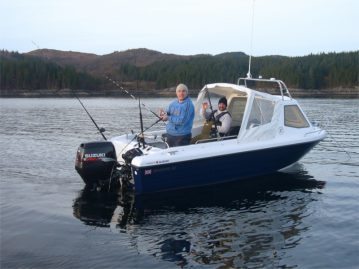 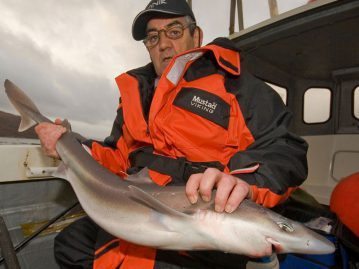 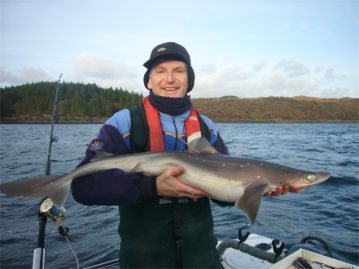 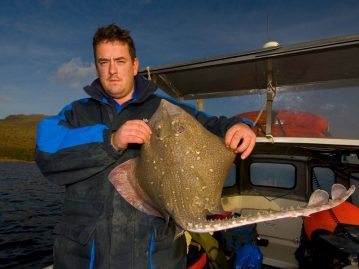 After a hectic day’s kayak fishing with Paul, enthusiasm had been sucked from my brain and body by strong winds and icy rain. Together we had already landed and tagged a number of our target spurdogs, caught dozens of LSDs and several thornbacks. Daylight was fading and most of the gathered boats were heading for the shore with sights set on the warmth of the pub. Paul and I had a more tasking 20 minute paddle back and likewise decided to call it a day. Reaching for my rod, it suddenly buckled over. In a blink, the tip hooped right down into the water. Franticly working the butt free of the rod holder, I held on for dear life as the powerful fish towed a complete 180 degrees circuit around my kayak. I knew this was an angry Sunart common skate. With all thoughts of cold wet misery extinguished, I mentally prepared for the battle for my life. But before I could compose myself for the task, my line parted and I went flying backwards, only just managing to stay in my yak. 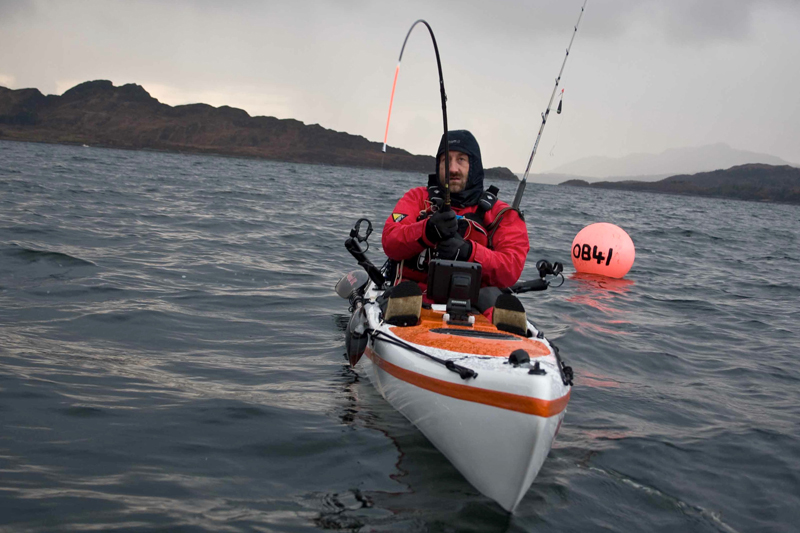 I turned to Paul in shock and disbelief. This was my first common skate encounter and it had made rapid mincemeat of my 70 lb spurdog trace. Paul grabbed his rod, quickly re-baited and lowered back to the seabed. A scant couple of minutes later he was leaning precariously back in his kayak with his rod doubled. The law of averages would suggest the same feeding skate had returned and taken Paul’s bait this time. Several small boats came to investigate the commotion as it was clear that something very large was in play. After 15 minutes of bullying, Paul finally coaxed this heavyweight off the bottom. Another 5 minutes of relentless arm-pumping saw a large shadow come up under the kayaks. At the same time, Paul’s other rod started twitching. We needed to get it out the way, so I drew alongside in close and did the clearing honours. Tied up next to Paul was awkward but with this rod now out the way, I unhitched from Paul’s Kayak and drifted free. Paul could now play the skate around the kayak for releasing on the surface. It was near dark now and still bucketing with rain. It only took seconds to unhook the majestic creature. I drifted past to get a photograph, but poor visibility meant I snatched only a couple of blurred shots. Buzzing with excitement, and after quickly relaying events to Shaun’s crew, we headed back to the launch site, impervious to the hard paddle in freezing rain. Did we have a story to tell in the pub! 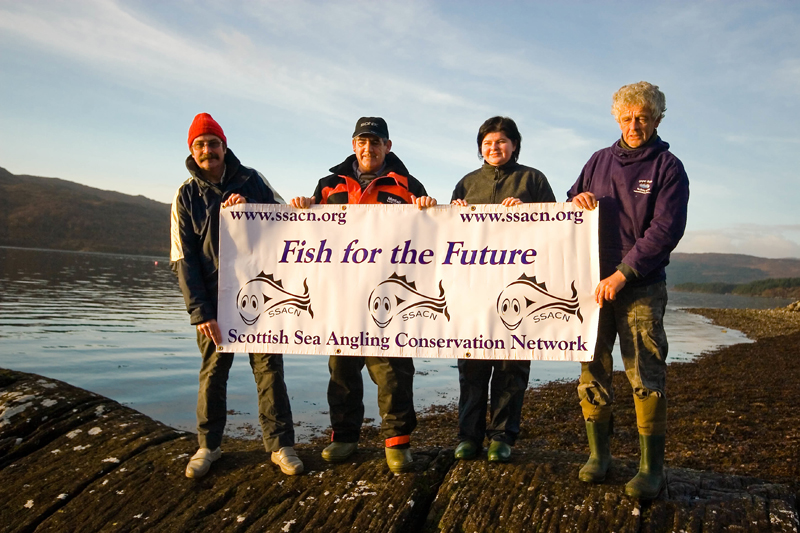 The Sunday proved disappointing across the board, with few additional big spurs caught. This probably for reasons of curtailed fishing times as departures had to be staggered due to limited space on the ferry. Our boat drew a second day spurdog blank, but we did enjoy some good fishing with strap congers and thornbacks to 9lb. Overall, the weekend was a resounding success… not least on a social level! Hope is that data gathered from recaptured tagged fish will serve to trumpet to political powers the high tourism/recreational value of these precious localised spurdog populations.

A video from the day is available here.