Do ceramic bearings or ceramic hybrids offer serious advantages over ordinary stainless bearings? Opinions vary even among top casters and anglers, so we asked Neil Mackellow and Iain Graham to provide their alternative views.

Part 1: We kick off with the thoughts of most the famous ‘beard’ in sea angling, Neil Mackellow has the floor…

A visit to the USA revealed varying opinions on the subject of ceramic bearings, providing much food for thought on the tuning and running of multiplier reels. Attending Sportcast USA’s International event was a golden opportunity to talk to the guys who have been using hybrid ceramic bearings for a long while. Originally developed for industrial applications, but now used in roller blades, skateboards etc. their popularity in this area has allowed them to become commercially available and viable to anglers.

I say hybrid ceramics because while the balls are made from ceramic materials, the casings, cages and shields are metal similar to the standard units. True ceramic bearings have ceramic races and balls, while the ones we are using have ceramic balls of Silicon nitride, and steel races.

The one thing that people seem to agree on is that because the balls are lighter they allow the unit to accelerate faster than conventional bearings. This obviously has an effect on the acceleration of the spool during casting, but it also has to be controlled. It should always be remembered that the optimum tune is as fast as possible while still under control.

A theory from friend and US caster, Blaine Osborne, is that the ceramics are not heating up significantly during the section of the cast when the spool is spinning the fastest. Therefore the tolerances are not tightening up and increasing drag as much when the sinker is accelerating and flying at peak speed.

He also did some comparisons using reels with both magnetic – Penn 525 Mag – and centrifugal – Abu 6500 Mk 2 Rocket – brakes. He performed six casts with both types of bearing in each reel taking the best three with each set to make an average. All bearings were run on Tournament Rocket Fuel; winds were light and variable; reels were loaded with 0.32mm mono plus a 60lb leader casting a 150g sinker. 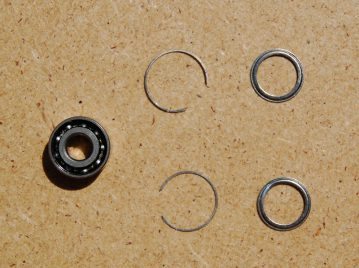 In both cases the hybrid ceramics produced the best averages, the Penn Mag with ceramics was 16ft up and the Abu Rocket 12ft. Blaine said afterwards: “I was impressed, especially since the testing occurred on a day with little or no wind to influence the averages. Best cast of the day was a 706ft with the 525 Mag and hybrid ceramic bearings.”

He has also made another important observation that I tend to agree with. Over to Blaine: “I have found that ceramics do require regular cleaning. After 12-20 casts they start to slow down. Clean them and they are fine again.”

Another area discussed was oils. Initial tests by most users were carried out with just a small drop of Tournament RF. I understand this was partly because the original supplier had said they could be run almost dry. However, after a while the bearings were speeding up dramatically. After much discussion it seemed that most of the hybrid ceramics have been supplied with a thick oil/grease in place that was extremely difficult to remove. I suspect this was the reason the bearings were speeding up after use, as the oil mixed with the grease residue and broke it down.

When I first obtained a set of hybrid ceramics I left them soaking in petrol for two hours, gave them a few spins and left them in fresh petrol for another hour. Once removed and having allowed all the petrol to evaporate I spun them on an arbour and boy, was I impressed. They were quiet, smooth and ran three to four times longer than my conventional units.

I have always believed a mixture of medium viscosity oil that breaks down quickly, combined with moderate magnetic braking, is the best way to achieve reliable, consistent performance from a modern reel. As I had an idea of how these units ran with thin oil I opted for Red RF to try something different, but more in line with my own standard tuning procedures. 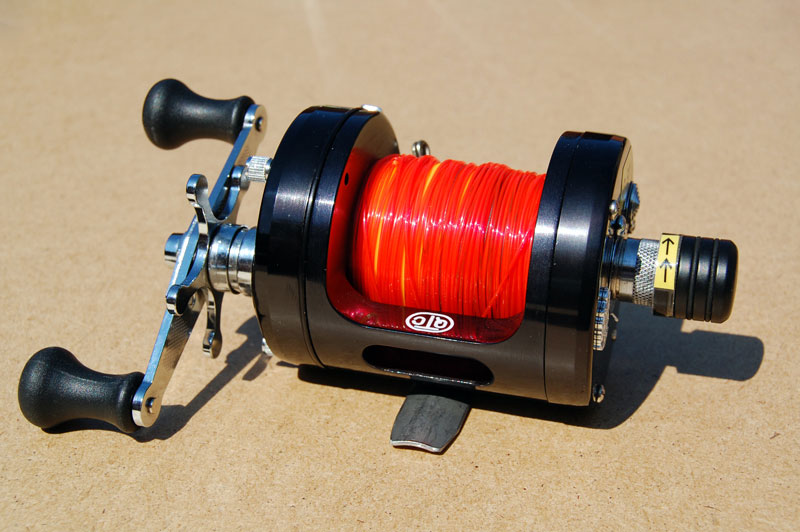 I lay the two bearings on a piece of kitchen towel and put two moderate size drops of Red RF onto the bearings shields. This disappeared almost immediately and as I lifted them off there was just a hint of oil on the towel, meaning than most of it was inside the bearings. Inserting them in the spool and reassembling the reel I spun the spool gently a few times for the oil to disperse around the inside of the units.

Once the oil was distributed throughout the bearings I gave the reel a good hard spin with the handle and knocked it into free spool. After an initial rumbling the bearings quietened down and ran very smoothly although still with a little rumbling. I then did a series of comparisons with standard bearings prepared in the same manner.

With the ceramic units and the magnet in position as if I was about to cast at a tournament – 1.5 turns off on a 525 Mag T – the spool ran for 13 to 15 seconds. This compared to 12 to 14 seconds with conventional steel bearings in the same spool. The results being very similar with moderate magnetic retardation. But with the magnet wound all the way out things started getting interesting. My reels in standard field trim run for around 50 seconds, with the hybrid ceramics in place however they ran for an average 90 seconds!

This coupled to Blaine’s findings is positive evidence that ceramics do offer increased speed over conventional steel bearings. However, there is still testing to be done to find their optimum tune.

Battle of the bearings continued

Part 2: Considering switching to ceramic reel bearings, but unsure of what you’re buying into? Top caster Iain Graham gets to the heart of matters, peeling back the bluster to help you decide if ceramics are worth investing in…

The connected worlds of fishing and reel tinkering are buzzing with talk of the pros-and-cons of ceramic bearings. Just whack these super-dooper babies into your reels and casting distances will instantly grow – gain without the pain, if some of the suckering blurb is to be believed.

In the main, beach anglers are moving to high spec ABEC7 Tournament Bearings, which are easily purchased via eBay. My opinion is that any quick switch is a blind leap of faith, with little or nothing in the way of discernable benefit returned… and I’ll tell you why. 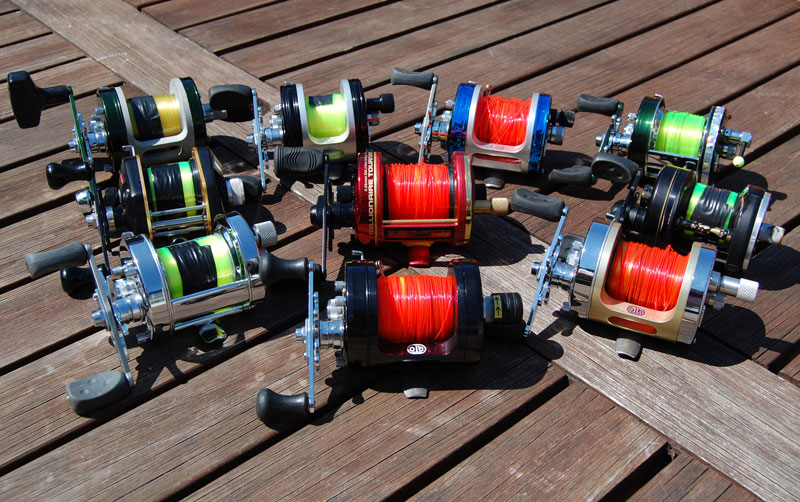 In the rather mundane world of bearings, things are often not all they seem. Some advertised ‘ceramic’ bearings are in fact stainless/ceramic hybrids, consisting of stainless steel races, and a cage carrying ceramic ball bearings. The first clue in the price: the real thing doesn’t come cheap, and a single set of genuine ball-and-race full ceramics will generally cost more than £50. You can also physically check to see if you have hybrids by carefully prising open the dust cover with a needle, and examining the internal balls: these should be black, white, or possibly even green. Regardless of colour, they will not appear metallic.

The ABEC prefix refers to the ‘Annular Bearing Engineering Council’, while the accompanying number scale is the system for rating the manufacturing tolerances of bearings, whether steel, ceramic or otherwise. Bearings rated under the ABEC system are typically labelled ‘precision’ bearings; they are rated with a number from 1 to 9, with the higher number assigned to bearings manufactured against a higher standard of precision. Put simply, the higher the number, the tighter the tolerances and the more expensive the bearing.

A more precise bearing with finer tolerances, by definition, must be ‘tighter’ and therefore may not run as freely as a lower rated bearing. An ABEC7, for example, may well be smoother than an ABEC3 bearing, but there is a good chance that it will not be as ‘free’ running. Clearly, this anomaly has performance and user-friendly implications. 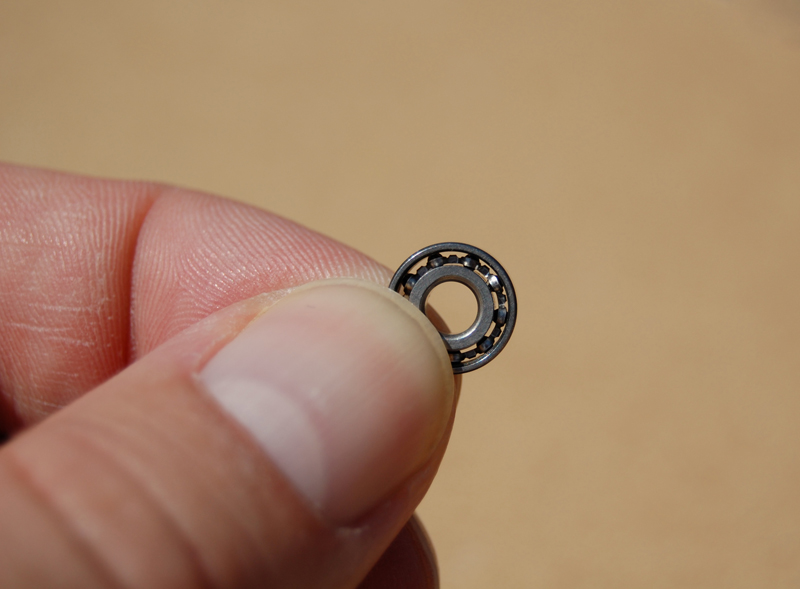 Many casters run their ceramic hybrids ‘oil free’ – the lack of viscosity from the oil upon the component parts may overcome the tightness of the ball against the race, but it can cause them to misbehave, making them difficult to control especially when casting lighter leads.

Again the question beckons: Do ceramics offer anglers any big advantages? My experience says not. A new Abu reel, for example, will probably be fitted with ABEC3 steel bearings; once you have the reel broken in, ask yourself if it runs too slow? I would very much doubt that it does for any real life fishing scenario that the reel will encounter.

My argument is that ceramics are not some magic cure for reel or casting ills. However, there are several small benefits that may soundly sway those considering a move away from standard bearings. These would include: lightness, finer surface finish, and longevity coupled with the fact that they won’t rust.

From a strictly casting perspective, the ‘steel verses ceramics’ jury is most definitely still out. Personally, I use both steels and hybrids, and if I’m completely honest, I believe any benefits are almost indiscernible. But, for reasons I should really be ashamed of, I confess to using ceramics in my ‘fishing’ reels. If, like me, you punish your beach reels, and are habitually lazy when it comes to aftercare and maintenance, then you have a good reason to upgrade to hybrids. I swapped to ABEC5 hybrids a number of years ago, and have not had to replace a single bearing since… neither have I stripped them down for a single clean! 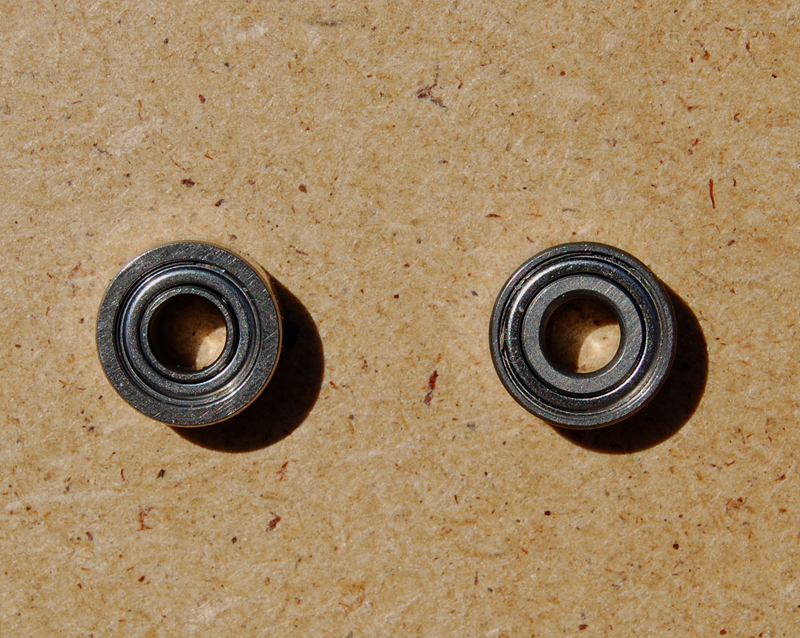 If you do intend to change over, good advice is to give new bearings a very light oil on the initial fitting just to afford the steel components some rust protection. Thereafter, you can pretty much run them ‘dry’ forever. It is also worth buying from a reputable source, as there are unscrupulous sellers who may sell you steel bearings in disguise. You have been warned.