Want to know more about collecting, keeping and using razorfish? Planet Sea Fishing reveals all about this superb bait.

Most beach familiars will have at least a fleeting acquaintance with razorfish or razor clams, even though it may only be the sight of splayed shells along the high tide line. The razor is white-footed mollusc that’s easy to collect and highly attractive to many species of fish, including cod and bass. Anglers not inclined to gather their own razors can purchase frozen ones from most good tackle shops, while many fishmongers and some supermarkets also address demand for a shellfish that is also desirable table fare.  The razor is a burrowing mollusc normally encountered along the extreme low water margins of open sandy shorelines that uncover briefly on spring tides. Two common razor species populate the British coastline: the smaller curved or sword razor (Ensis ensis), and the grooved, or pod razor (Ensis siliqua). Serviceable grooved razors are generally five to seven inches long, but can reach more than 12 inches in length. Both species inhabit the same types of ground, regularly together, and often in large exploitable colonies. 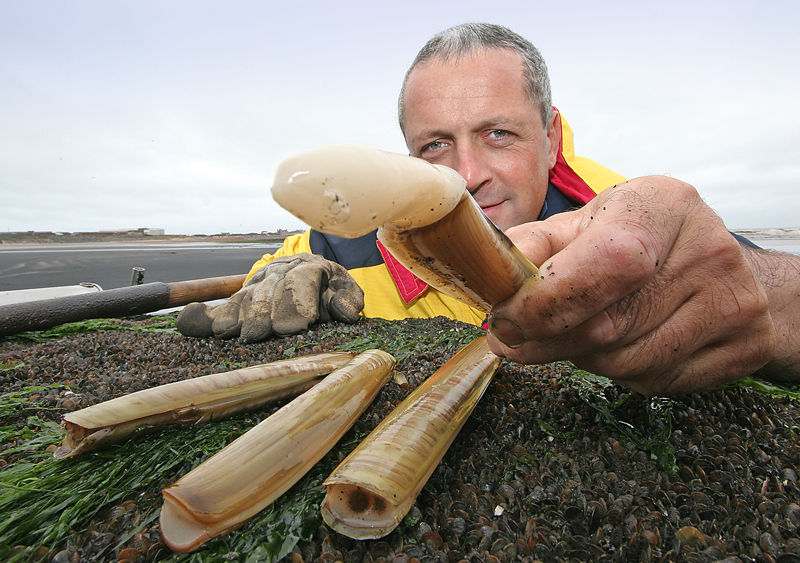 Razor burrows cut either straight down, or at angles to around 30 degrees through the sand. A muscular, retractable foot points downward, and though difficult to spot, extendable breathing siphons are located at the upper end of the shell. An educated eye can often spot the top of an unsuspecting razor sitting flush with the sand and plugging the burrow entrance. Razors feed by siphoning water, and when alarmed, they have the ability to descend two feet or more at bullet speed. Twin hinged shells identify the razor as a bivalve rather than a single-shelled univalve animal. Razors are so-called because the long rectangular shells resemble old cutthroat razors, and perhaps also because the shell can be razor-edged and inflict a nasty wound on unwary fingers.

Razors prefer fairly sheltered sandy beaches where the sand is of a firm consistency. There they can form semi-permanent burrows, and large beds. Location however, is not confined to hard sand beaches, as some softer sands, specifically those that around pronounced bars and muddy estuary mouths, can also be productive. Areas of sloppy sand are less predicable for gathering razors because turbulent seas instigated by strong winds easily scour and displace the shellfish.

Razors are highly sensitive to vibration and easily scared into rapid retreat. Clodhopping footsteps amplify through hard, compacted sand and reverberations from as much as 30 yards away carry particularly to near-surface razors. Such sonorous vibrations will send the alarmed molluscs rocketing downwards before you have a chance to ambush them. The razor’s escape is very often signalled by a sudden skyward gout of water. In thickly populated ground, it is not unusual to witness a volley half-a-dozen or more such jets going off instantaneously. Softer sand has the effect of dampening footfalls, thus allowing the stealthy bait collector to sneak up and take razors jutting from their burrows unawares. 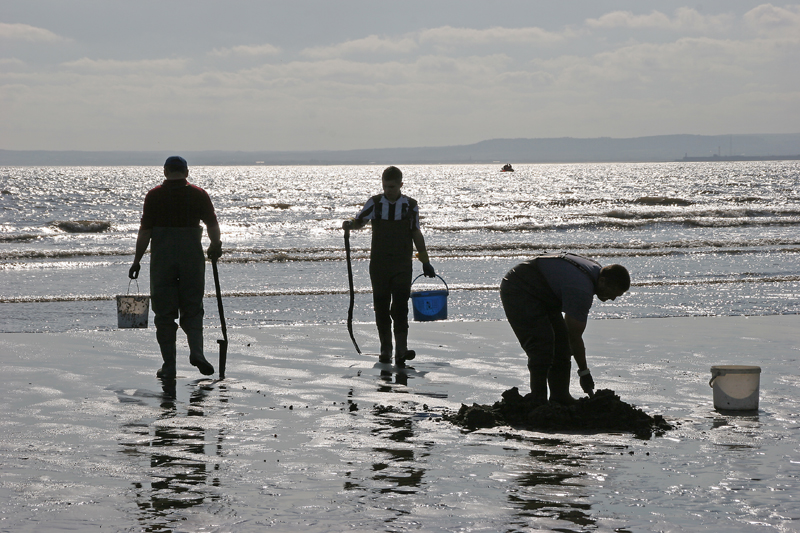 Razors will often be seen protruding from their burrows, more so with the aid of a bright headlamp during the hours of darkness, when for reasons I have never been able to quite fathom, the animals seem more inclined to fully reveal themselves. Generally speaking however, during daylight or night, the majority of animals will be sub-surface, when the only telltale indication of their presence will be a small, wet indentation marking the top of the burrow. Close inspection will actually show differences in the shape of the burrow entrances. Curved and smaller straight razors are more inclined to produce the classic ‘keyhole’ shaped hole, but the largest razors often leave a much bigger oval-shaped aperture. There are several different ways in which to gather razors, and some are of course, more labour intensive.

Though energy-sapping, selective individual digging or trenching a mark where razors are tightly grouped is perhaps the best means of acquiring a substantial quantity quickly. In the absence of the obvious physical indicators, as can be the case when surface sand has been blighted by recent heavy rainfall, indiscriminate blind digging of a known mark can also prove productive. But success hinges on an intimate knowledge of the ground being dug. 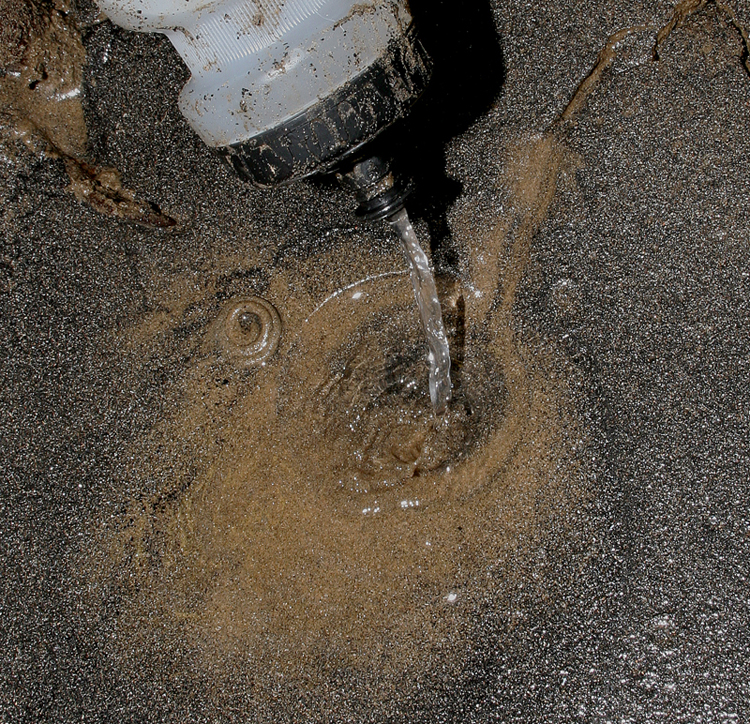 Salting can be carried out in two ways. The first and easiest is to use a squirt-able salt solution from an old washing up liquid bottle, while the second method is to use raw salt. Making up the salt solution couldn’t be simpler. Pour a roughly level 40mm of table or rock salt into a large bucket and fill two-thirds full with sea water. Give the mixture a good swish around with your hands for a couple of minutes, before dunking-and-filling a large squeezy bottle.  Approach each razor hole quietly so as not to send them diving downwards, and pour a liberal amount of salt or squirt the salt solution into each hole. After only a short time the hapless shellfish will rise to the surface and often exit the burrow completely to give itself up on the sand.

Alternatively, you can employ the ‘grab ‘n’ hold’ technique in exactly the same way as freshwater fishermen might extract lobworms from a garden lawn after a bout of heavy rain. Grab the surfaced razor to prevent it retreating backwards, and hold under solid even pressure. It will slowly relinquish its grip, and can be removed without the need for digging. Never attempt to forcefully wrest the razor from the sand as, more often than not, you’ll tear the foot off and be left with a vacant shell. Razors are thought to emerge in this way either because the salting method gives the impression of the tide has come in. My own thoughts are that it has simply irritated the hell out of them, and they have surfaced to clear the unwelcome intrusion.

Spearing is an old fashioned method of skewering and dragging razors from their holes that is still effectively employed in some areas. It is not a method that I have ever been particularly satisfied with, as even the best exponents of the spear badly damage a large amount of the shellfish they extract. For your interest though, a narrow barb-ended metal pike or spear of about three feet in length is pushed down the burrow at a comparable angle to which the razor is thought to be lying. When the resistance of the shell is felt, the spear is pushed in a further few inches and twisted a quarter turn, before being withdrawn with the spiked razor onboard.

By far the easiest way to gather a quantity of fresh razor fish is to walk the beach following several days of strong onshore winds. Provided the wind is blowing hard onshore, in many areas heavy wave action will scour large numbers of razors from the security of their burrows. The incoming tide then deposits them on the beach, sometimes in huge numbers. My best haul of such razors gave me over 1000 razor fish in an hour. 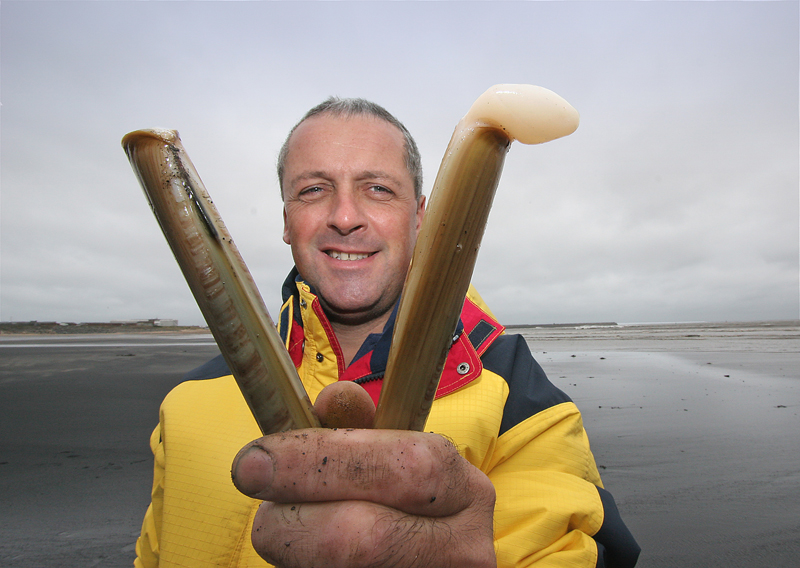 My only labour, other than bending down to pick them up, was dragging a full bucket and two bulging sacks back to the car! The real trick however, is to get down there before the seagulls feast on the free offerings. 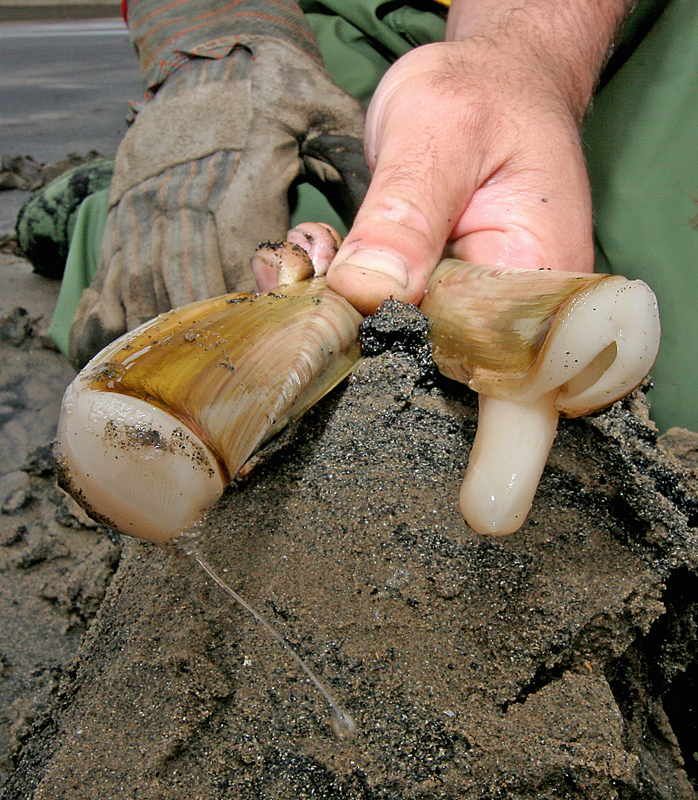 Kept cold in a fridge, razors will stay alive and in first class condition for at least ten days with minimum effort. But they should be kept moist at all times. Razors to be used quickly can be chucked straight in the fridge in a cat litter tray. However after only a couple of days, the unhinged side of the shell will start to open, leaving the animal to loll out loosely like a dog with a thirst. This is because attempts at movement from the animal pushing out against the unsupported shell causes the thin muscular filament holding the edges of the shell shut to stretch and split, and the shell to open. An excellent tip to prevent splitting is to secure pairs of razors top-and-bottom with a couple of thick elastic bands.  The best way to store live razors for more than 72 hours is to roll manageable bundles of a dozen in damp newspaper, then secure top and bottom with a strong elastic band. A large cat litter tray will accommodate at least four such bundles, and if you replace the damp newspaper every couple of days you should have few problems.

Frozen razor is widely available from companies such as Baitbox and Ammo, but home freezing is straight forward and should hold no fears for anyone looking to stock the bait freezer. For quickness razors are normally frozen down in the shell. This amounts to simply placing a quantity in large poly-grip bags or freezer bags. Place these on a steel tray in the fast freeze section of the freezer, before transferring them fully frozen to the space set aside for your frozen shellfish. Some anglers prefer to extract their razors – tongue, fringes, gut and all – from the shells before freezing. There is no doubt that the whole animal will catch fish but if I am freezing down shelled razors, then I prefer to retain only the fleshy foot or tongue which comes away easily with a quick downward tug and twist.

To toughen them up, lightly dress the tongues in table salt and freeze in bags of 10 or 20. This is space saving and avoids the latter hassle of having to shell your razors while fishing. It’s a good idea write the date of freezing on the bags with a permanent marker, so stock can be rotated. Stinking razor baits that have been defrosted and re-frozen several times over can also be very effective for such as shore cod following onshore storms.

Cod, bass, flounder, plaice, dab, haddock, whiting and even rays number among the species that will eagerly wolf down a razor, or razor cocktail bait. Mounted on a 4/0 – 6/0 hook, razor fish works well on its own from recognised rock marks for cod. Smaller razors can be deadly for flounder, dab and plaice glutting on pummelled shellfish after a storm. Lug/razor fished on a pennel snood is a frontline winter cod bait which accounts for many double figure cod around the UK. 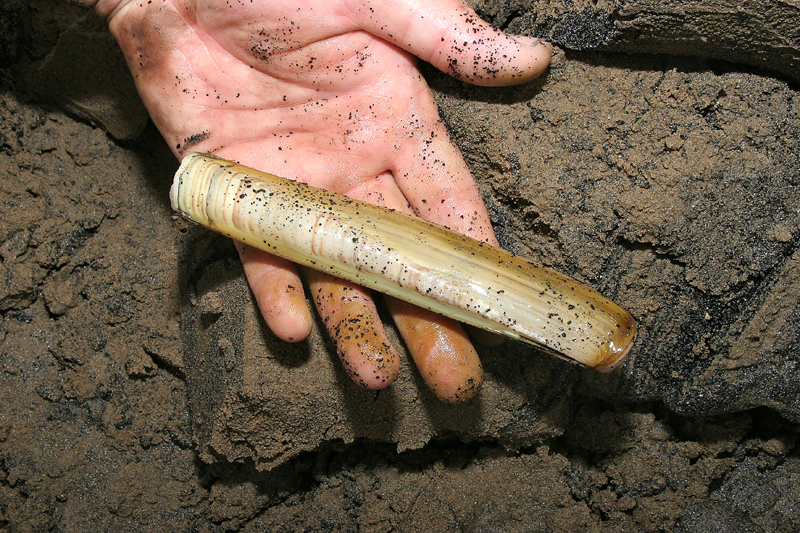 A sandeel and razor bait bound back-to-back with elastic thread is a good bet hedging bait that will take rays, cod and those dogfish that you might prefer to avoid. Afloat, either lug or rag garnished with a razor tongue is generally good for plaice after May. Generally modest reef ling are sometimes very partial to honking razors that have been in and out of the freeze a few times. Over rough, kelpy ground small pieces of razor, particularly when tipping off worm baits will take ballan wrasse. And like most shellfish, razor is very good for haddock.