Sometimes in life you get opportunities you simply cannot pass up on. This happened to, James Wigglesworth, when his dad returned from a World Sport Fishing trip to Guinea Bissau last year with tales of giant tarpon that were untameable, huge nurse sharks and more snapper, barracuda and jacks than you could shake a rod at.

Keith and Tim had unfinished business and were keen to revisit after the glowing report and wanted myself and George to join them. We didn’t take much convincing and so it was decided we were going. Nine months later and we start the long journey to our destination. Now I won’t bore you with all the details but after two flights, an overnight stay on the coast and a three-hour boat journey we arrived at the beautiful Orango Island. We were promptly greeted with a cold beverage then shown to our rooms. We were fishing first thing the following morning so an early night was in order although the excitement and anticipation got the better of me and I can’t say I got the shut eye that was required. 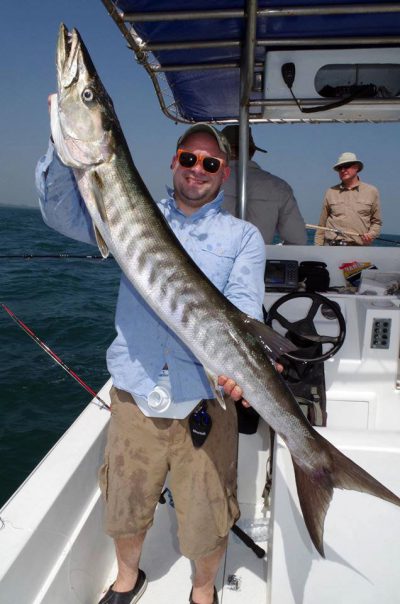 The day was upon us and after a quick breakfast we were loaded onto our designated vessels and off we went. The first day involved trying to find some bait fish but the wind made this very difficult so we had an hour or so of trolling where we picked up some fairly respectable barracuda the biggest, a fish of 40lb, falling to George. That was followed with some bottom fishing for snapper and the beautiful cassava and we ended up in the area that is known for the big sharks and tarpon. Unfortunately, these failed to show on our first foray there.

The next two days followed a similar pattern with us hunting the bait fish first then fishing a variety of marks and ending up in big fish alley. We had some nice fish between us with Keith boating a variety of sting rays and a nice nurse shark around the 100lb mark, George was consistently banging out cassava and snapper and he also managed one of his target species in the shape of a banjo shark or guitar fish as they are also known. Tim was happy hammering out the species while I was struggling a bit but heyho that’s fishing.

The fourth day saw us happen upon a huge shoal of feeding jacks and I can honestly say I’ve never seen such hectic chaotic fishing in my life. As we approached a reef the skipper suddenly jumped up and shouted, “JIG, JIG, JIG, QUICK!”.

This had us all frantically searching for jigs in our bags while being shouted at by Max to hurry up. The next 15-20 minutes were a bit of a blur but we were all simultaneously into the incredibly hard fighting jack crevalle. I think I managed four in just one drift. 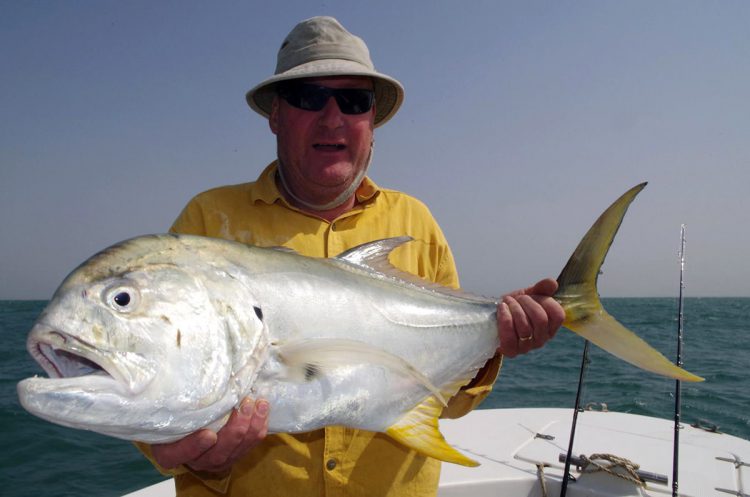 No sooner had you boated one than the skipper was passing you a rod with another one on. It was great to look around the boat and see everybody smiling with their rods bent double and all of us giggling like school girls. Later that afternoon we stopped off at a mark renowned for big nurse sharks and it wasn’t long before I was into one. Unfortunately, after five minutes or so it bit through my trace but a short time later I was into another and after a twenty-minute scrap we had the first monster of the week estimated at 260lb.

Day five was supposed to be our last on the boat and it turned out to be a day I’ll never forget. We managed to get some live bait that morning and the day went by with us catching the usual suspects and as on the previous days we ended fishing in the area known for producing monsters. 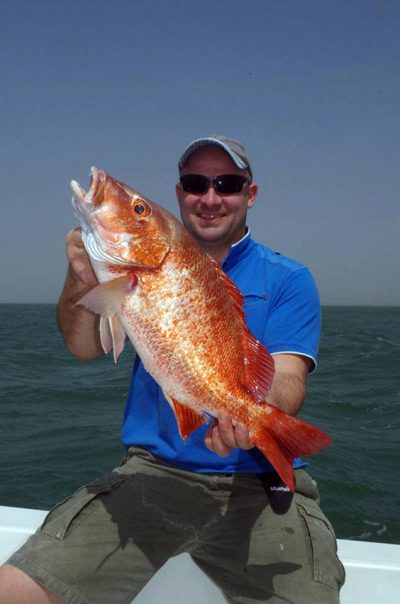 It started producing fish from the off with several barracuda and a nice bonus jack for George, we had black tip sharks circling under the boat and I couldn’t resist reeling my bait off the bottom and instantly hooking one which went nuts. It wasn’t a huge fish and again this one slipped the hook just under the boat.

The evening went on and skipper gave out the orders that it was our last drop as we had to head back in for dinner so everybody started preparing for the off. Sat with my rod in hand I had a savage take that resulted in nothing but on a quick inspection of the bait looked like it had been smashed by a barracuda, knowing we were off any second I quickly dropped the now not so live bait back to the bottom and within seconds I could feel something having a munch. Whatever it was moved off slowly with the bait so I gave it a few seconds before gradually tightening up on my lever drag reel. As soon as the fish felt resistance it just took off and within a matter of seconds there was a huge splash behind the boat and the skipper let out a cry that will stay with me forever, “TARPON, TARPON, TARPON!”.

A Struggle With the Ultimate Prize

Before I knew what was happening the anchor rope had been cut and we were off trying to keep up with it. The next two hours and five minutes were the most painful yet most enjoyable I have ever experienced. The first 15 minutes flew by and I had the likes of Tim telling me I had better get comfortable while taking several photos of my distorted face! To the right hand side of me I had our amazing deckhand Hassan talking me through every head shake, run and jump of the fish, this guy really knew his game. As the minutes rolled into hours the fight settled into a pattern but this didn’t do anything to ease the pressure my back was under. Luckily I had my old man at my side and there were times when I could have easily passed the rod to somebody else but there was no way he was going to let that happen.

I won’t lie, I moaned a lot and some very choice words passed my lips on more than one occasion but gradually the fish was tiring. It came up in the water some ten yards off the boat and gave a very lazy roll, this was when we first got sight of the sheer size of her. I said to Hassan, “How are you going to land it?”, his reply was, “Don’t worry about that, it’s my job”. So all I had to do was concentrate for the last few minutes and we would have her in our grasp and concentrate I did. The skipper was working tirelessly to position the boat so the fish didn’t swim underneath and rub the line on the hull while I just kept the pressure on. It came to the stage where it was either me or her that was going to break and thankfully she submitted first. That shining silver flank just popped up next to the boat and there she was. In the blink of an eye the skipper Ze and Hassan where hanging over the side of the boat and between them they managed to just about pull her over the gunnels. The screams went up followed by lots of man hugging and hand shaking, we had what we came for; The Silver Queen.

Various weights were being suggested but I couldn’t accept an estimate, I had to know so we took the relevant measurements and photos before we said goodbye to her. It wasn’t until the journey home that we had the weight confirmed at a colossal 264lb which just blew my mind. We were soon to find out that this is only 22lb shy of the world record. 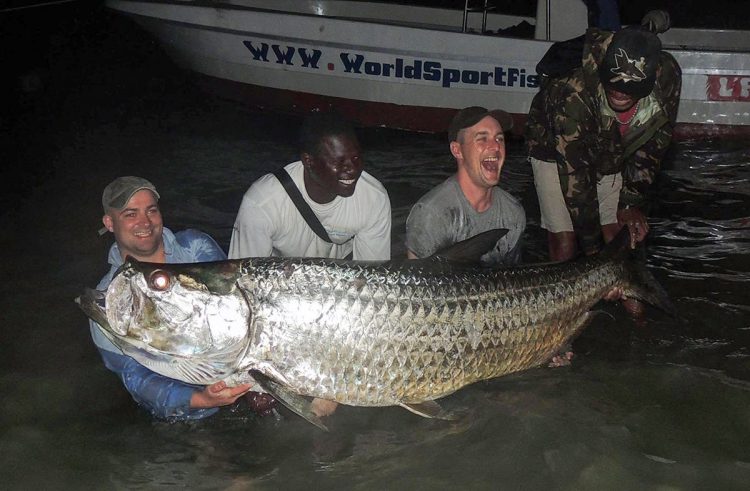 Heading back to camp that night was a surreal experience. We had missed dinner and everyone was in bed but the guys at the bar kindly stayed on so we could have a quiet celebratory drink. Let’s just say I slept well that night. We managed to secure a couple more days on the boat in the hope that someone else could hook into one of these leviathans. Unfortunately, it wasn’t meant to be and the following days passed with some quality fish being landed just not the monster that we wished for. 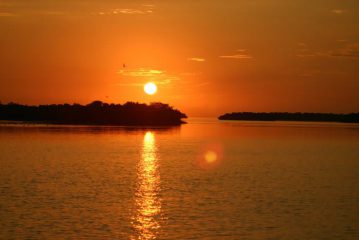 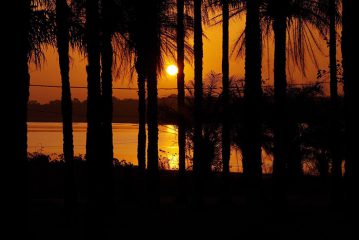 This holiday exceeded all my expectations and one day I will return. Pepe our guide for the week couldn’t do enough for us and made sure everything ran as smoothly as possible along with all the other staff at the hotel. A special thank you must go out to the old man and Tim who dragged us out there and had to put up with us all week and not forgetting Richard and Kelly at World Sport Fishing for putting the whole trip together. If you fancy a bash at these huge tarpon and the many other species that dwell in these rich waters, then give them a call on 01480 403293.