The summer fishing is warming up very nicely and our beaches are certainly seeing some very nice catches. The mayweed is still causing problems for beach and boat angler, but it should only be with us for a short while now.

St Osyth beach has turned out some more of those heavyweight stingrays, one for Matt Clark caught on a pennel rig with a ragworm bait, and another for Russell Cole, with both fish estimated at over 50lbs, with Matt’s ray probably nearer 60lbs. Every summer we see these giant fish move into the shallower beaches on our part of the coast, they stay with us till the end of June before they move back out into deeper waters. This year looks like it’s going to be a bumper year for them, ragworm and peeler are the best baits. 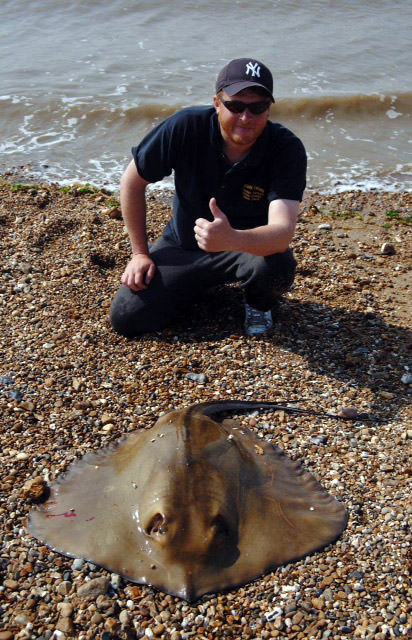 Clacton Pier is fishing reasonably well with thornback rays, dogfish and small bass. The daytime tides have been slow, but by evening into darkness it will improve your chances ten-fold.

Walton Sea Angling Club headed for the Holland beaches for their midweek evening match. They were met with a strong northerly wind which made the fishing rather uncomfortable. They fished either side of high water; the fish were feeding, but once again that mayweed was a problem on the anglers’ lines. Even so, thornback rays, dogfish, dogfish, eels, whiting and bass were caught.

The Holland beaches have improved this week especially after dark with more rays showing together with sole from nearer the Clacton end of the beaches.

The Frinton shoreline is suffering badly with mayweed especially on the ebbtides when it builds up on the anglers’ lines making reeling in almost impossible. Having said that, the flood tides are still fishable.

Walton Pier seems to have been the place to be this week, and with overcast skies and a coloured sea, thornback rays have fed voraciously. Sudbury angler David Backler fished the venue mid- week and caught six rays to 11lbs, with most of the rays caught on squid baits. Other anglers have reported similar catches. Because of the rougher seas the garfish and mackerel shoals have diminished, but all it will take is a couple of calm days and we will see these summer species feeding again.

The boats have struggled to launch during the week with nagging strong northerly winds, but the weekend brought fair weather with higher temperatures and the boats took to the water.

Clacton Boat Club reported thornback rays to 14lbs and some smooth-hounds although not so many bass this week. Dave Hollands also reported plenty of the dreaded mayweed causing problems.

The charter boats have reported smooth-hounds up to 16lbs this week, plus rays and bass all showing well.

Summing up this week, it seems as though we have gone back in time to the good old halcyon days of the 1960s/70’s with so many thornback rays being caught from the piers and beaches and now those giant stingrays appearing on our local beaches.

If you have any reports, you can contact me at popplewell1@btinternet.com

The high tides for the weekend are Saturday 17.10pm and Sunday 18.00pm