The US flounder is a more aggressive species than that found in Europe. Dana outlines the tackle and tactics used to hunt the Winter flounder.

It is the middle of March and my freezer is empty and the lure of fishing is more than I can deal with. Tomorrow I head for the coast and try my hand at Winter flounder, better known here in New England as the Blackback. During the winter this fish spends most of its time in deeper water, but in the spring these flounder head into the shallows to spawn and it is these spawning fish I will be targeting. While the waters may still be a bit cool, this has been a crazy year so it is worth a try.

Winter flounder are probably the species of flatfish that is most often caught along the New England coast. Other species found in New England waters include Summer flounder, Yellowtail flounder, American plaice and Atlantic halibut. While I will never say “never”, the Atlantic halibut is a very deep water fish and thus it is highly unlikely that any shore bound angler will ever run into one.

As mentioned previously, Winter flounder spend the colder months in deeper water coming into the shallows as the water warms up, usually beginning in April or May. Seeking out calm coves in the shallows that hold a bottom made up of gravel and sand, the flounder lays on the bottom waiting for prey to come to them. Flounder are not built to chase down prey so unless your offering is extremely close to where the fish is laying chances are you won’t get bit. That is why it is very important to work an area thoroughly before moving on. The good news is that where you find one your chances are very good that you will find more. 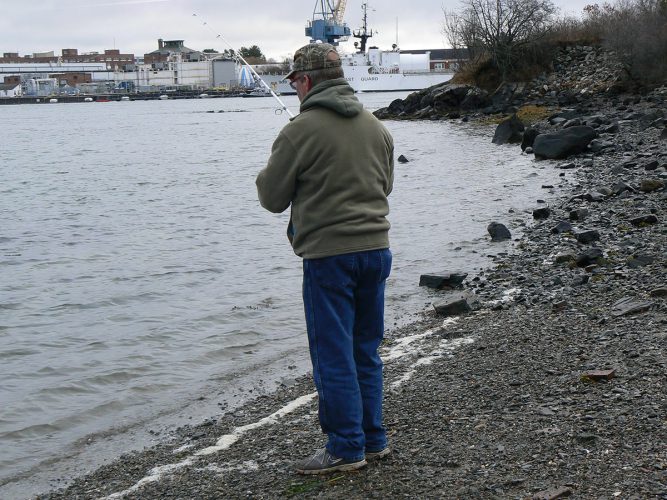 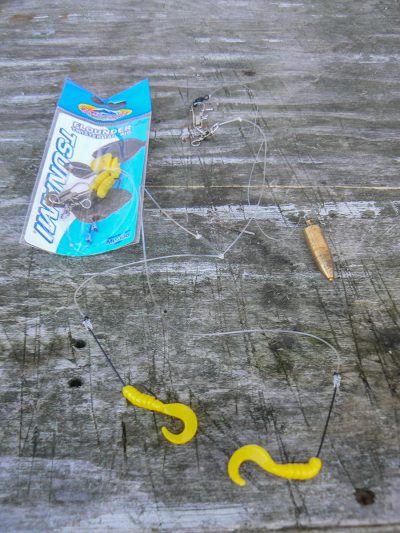 As I watched the Weather Channel, trying to figure out what the weather would be like, I began tying up some weights to run on my flounder rigs. The idea is to keep the baited rigs on the bottom without impeding their movement. As the New Hampshire coast is well known for its rocks, this obstacle needs to be dealt with as well.

My Tsunami Flounder Rigs have two leadered hooks running off of a three-way swivel. The third end being tied to the main line. Also tied to this point is a snap-swivel where a weight is attached. I could very easily attach a weight directly to the snap-swivel, but that could give me troubles if the weight gets hung up in the rocks. If my line breaks at this point I will lose my entire rig. This is how I addressed this possible problem.

Taking about four inches of Berkley Trilene XT eight-pound test monofilament line I tied a #5 Berkley McMahon barrel swivel to one end. This will be the end attached to the snap-swivel. To the other end I tied on a ½ to one ounce lead or brass weight. If this gets hung up in the rocks the eight-pound test line will give and all I will lose is the weight. A cost I am willing to pay. 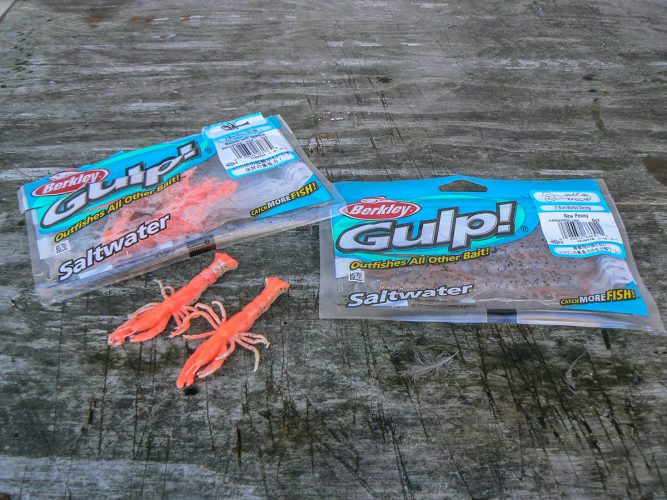 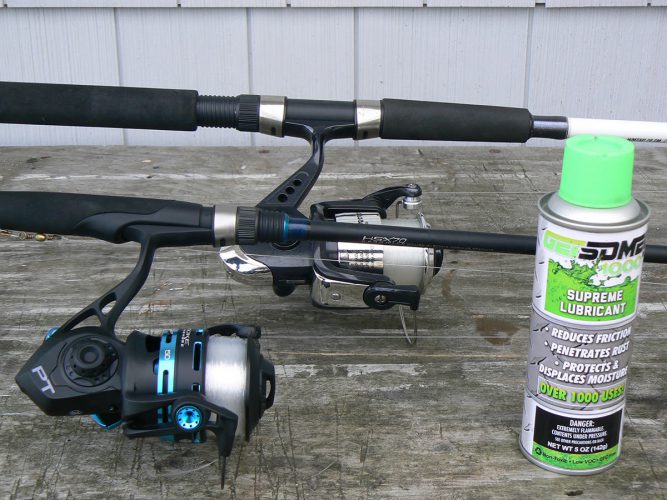 The drawback to using this light of line is that it gets nicked and cut on the rocks. For that reason, if you are fishing under these conditions I recommend that you check your line often. Both rods also had six inches of 20-pound test Stren Fluorocarbon leader material. Onto one rod was rigged a ¼ to ½ ounce leadhead jig and the other had the flounder rig. Though many flounder anglers like to use pieces of clam or mussel, on this day I was using Gulp saltwater soft plastics, namely their Peeler crab and Ghost shrimp.

The weather was being reported as another warm day, so my friend Stan and I decided to head out. I picked up Stan at around 7:30am and the weather was perfect in Goffstown, New Hampshire. It was warm and there was no wind. Our first stop was Pierce’s Island in Portsmouth and here we found an entirely different story. There was a strong onshore wind and it was cold. Despite this I decided to give it a try. Always the optimist, I grabbed my Yeti Hopper cooler (to put all those flounder I going to catch in), my rods and headed down to the water. Once at the water’s edge it was even colder so I reached into my pack and pulled out a pair of gloves. Also in my pack was my Hodgman Aesis shell jacket just in case it decided to rain. I almost put it on to break the wind, but I didn’t. 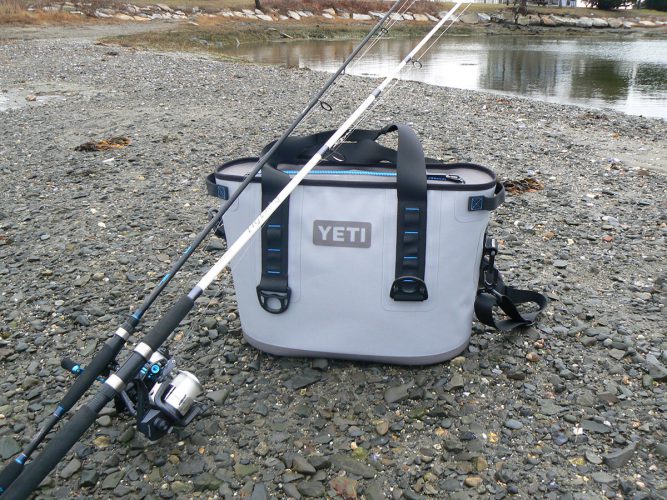 My biggest issue turned out to be the wind. The gusts made casting extremely difficult. After about an hour of battling the conditions with nothing to show for it we decided to move to a more sheltered area. Our next stop was Goat Island in New Castle. Here casting was much better and I had high hopes. Cast after cast I made, working the area, but nothing was happening. I started to do the worst thing an angler can do; I started to doubt myself. Maybe I was doing something wrong. Was it my gear or was I using it wrong? More than likely I was doing everything right and my problem was that the water was still too cold and the fish hadn’t moved in yet. After all, it was still March. Packing up we decided to move further down the coast and see what was going on there. 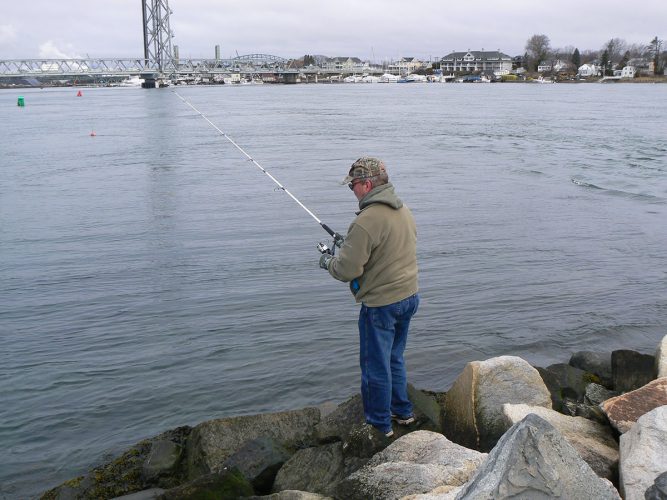 What we found was not encouraging. All along Route 1A the parking spots were full of cars, but they were not anglers. Instead the cars belonged to surfers. The wind had picked up and there were some pretty good sized waves breaking on the shore. No calm waters here so we decided to head for home. Once home I made ready to put my gear away, an act that included rinsing off my reels and then spraying them down with some GetSome 1000 to help protect them from the damage that comes with saltwater.

In my mind we had a pretty good day. It was the middle of March and I was out fishing. Yeah, we didn’t catch any fish, but that is fishing. Despite what all the magazines and TV pros want you to believe, more times than not anglers will go home empty handed. That is okay because that makes those times when the big one tugs on your line all that much more special.