White ragworm enjoys regal status among UK anglers, some of whom would sell their souls for a regular supply. Steve Walker provides a quick insight into this white-hot and much sought after worm bait.

White ragworm are of the family Nephtyidae, which encompases Nephtys caeca, Nephyts cirrosa and Nephtys hombergi. They have many different local names such as whites, whiteworm, snakes, silvers, and catworms. They are a very effective bait for several species, and are highly regarded particularly among competition anglers.

Whites are predatory worm. They actively swim and burrow, usually in clean sandy beaches, or broken ground mixed with sand in search of prey. They are long-lived and separately sexed. They can breed several times in a lifetime – unlike ragworms which breed once before dying. All mature worms in a local population will breed on the same day, but not always every year. The worm larvae drift around for several weeks before settling to the bottom. 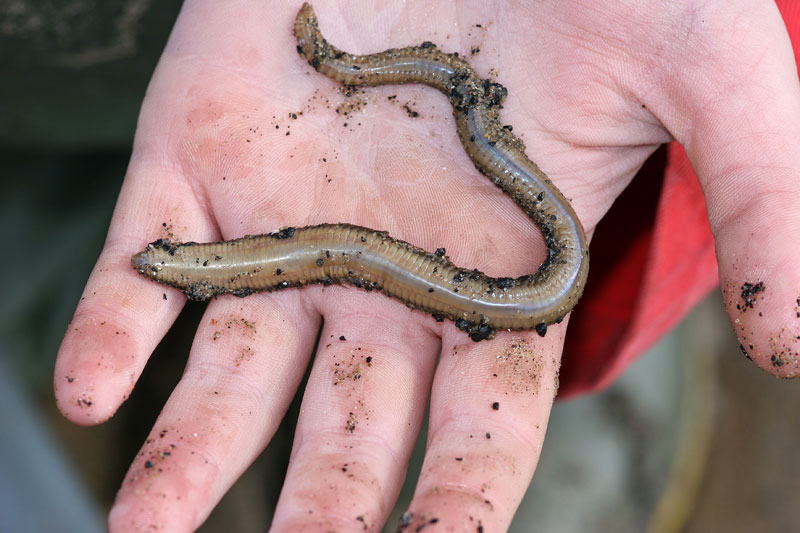 A three-inch worm may be five years old, while the biggest specimens are thought to be aged 12 or more years. Regardless of size all whites are prized by both match anglers and pleasure anglers, but their slow growth rate and infrequent spawning makes them vulnerable to over-collection. Efforts to commercially farm white ragworms have so far proved unsuccessful. 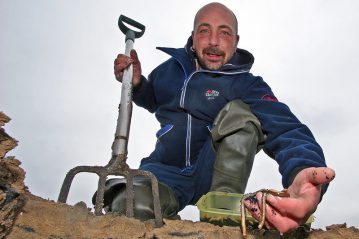 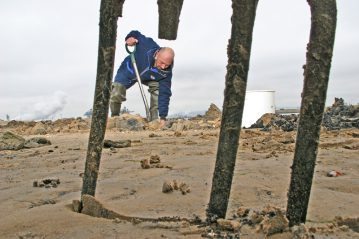 Most anglers who dig their own bait only usually come across the occasional bigger specimen by accident. Large whites, which can be 10 inches long and a fat as your thumb, are rarely found in great numbers, and it is unlikely that anyone could go out at will and dig a bucketful. It is hard work to dig whites in any quantity, but the good news is that once you have obtained sufficient numbers, they are very easy to keep alive with minimum fuss in a good fridge. As long as they are not overcrowded in trays or tubs and kept consistently cool they will be fine. The simplest way to store whites is in shallow trays with a just covering of chilled sea water. For longer term storage the trays should contain a base layer of clean sand, or fine sea-coal. In either material they will keep well for several months, as long as the sea water is changed every few days. 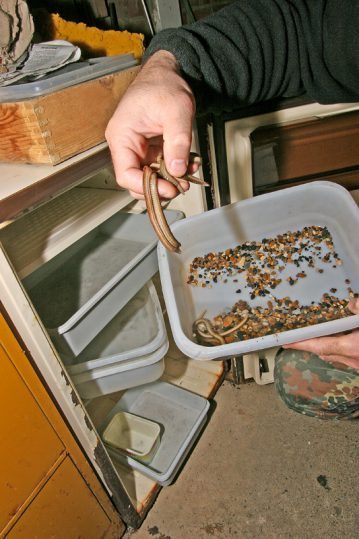 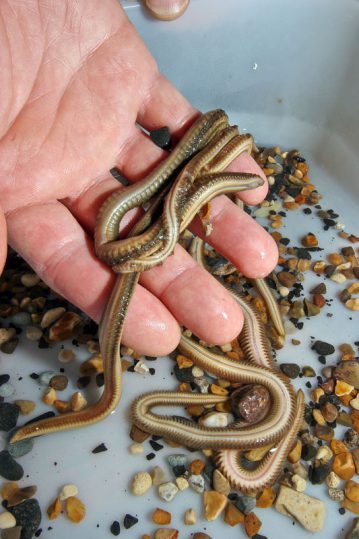 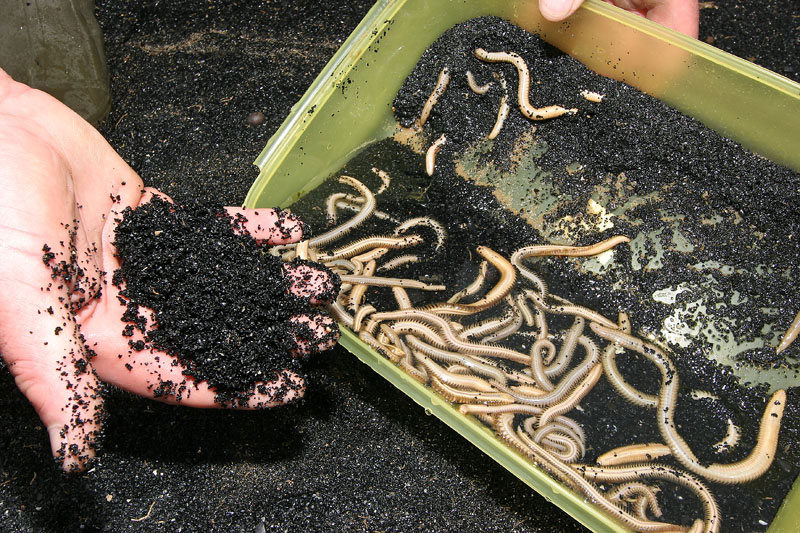 The best chance of finding white ragworm in any numbers is along the lower shoreline during a big spring low tide. Colonies are usually found in areas where there are good concentrations of tubeworms and/or razor clams present. Whites seem to prefer the same type of compact sandy ground which is typically found within sheltered estuaries and harbours. Occasionally bigger snake whites are found washed up among dislodged shellfish and the like after a period of heavy seas. Areas of mussels beds, scrub and shale can also hold good pockets of worms but these are generally very localised and quickly dug out. 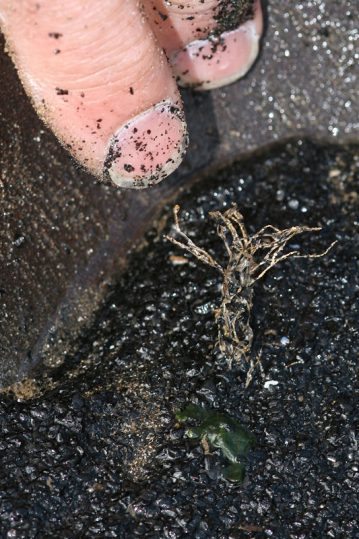 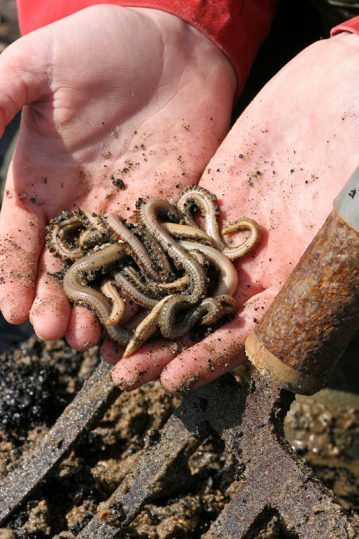 Digging pressure now means that many of the better whiteworm areas are shadows of what they once were. Anglers obsessive faith in this  worm’s ability to catch fish means that will travel many hundreds of miles to dig modest numbers if no whiteworm beds are known to exist locally. As a rule most whites are found shallow, within two or three inches of the surface. The bigger snakes whites however can be more than 12 inches down especially if digging for them with the tide still ebbing. A flat tined potato fork is a good all-round tool for digging in sand, but a standard narrow-tined fork makes lighter work of mussel and scrub areas. 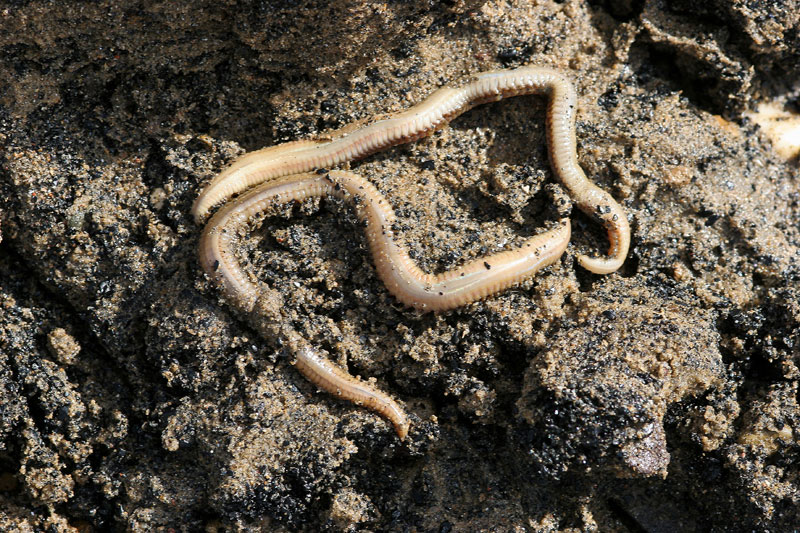 Because these worms are a scarce commodity and difficult to acquire, they tend to be used selectively. Use is generally confined to when conditions are absolutely right, or to important matches where they can make all the difference. Whites are a classic tipping bait. In winter in the North East, a big rag and lug combination bait tipped with a generous section of snake whiteworm can be deadly. A crab and whiteworm cocktail will also produce fish where other baits fail. Bunches or single smaller whites are very effective when “scratching” about for smaller species in clear water conditions; flounders in particular find them irresistible. 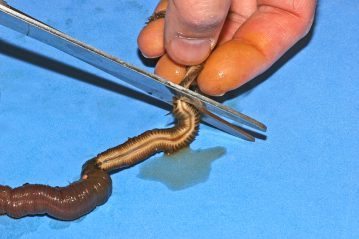 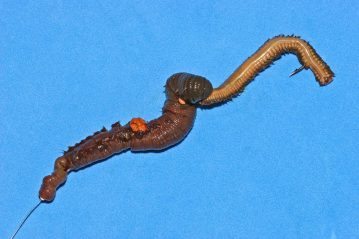 Whatever way you care to look at it, big white ragworm come at a price, either in blood and sweat, or hard cash if you can find a digger or rare shop that will supply. Don’t be surprised to pay a £1 each or even more for the bigger specimens.

Gently does it – Introduction