The Tronixpro Baitex is supplied in handy user-friendly plastic canisters with the thread being fed two ways from either the lid or from the side aperture. There is a third hole in the base which allows the Tronixpro Baitex container to be mounted on the optional metal mount. 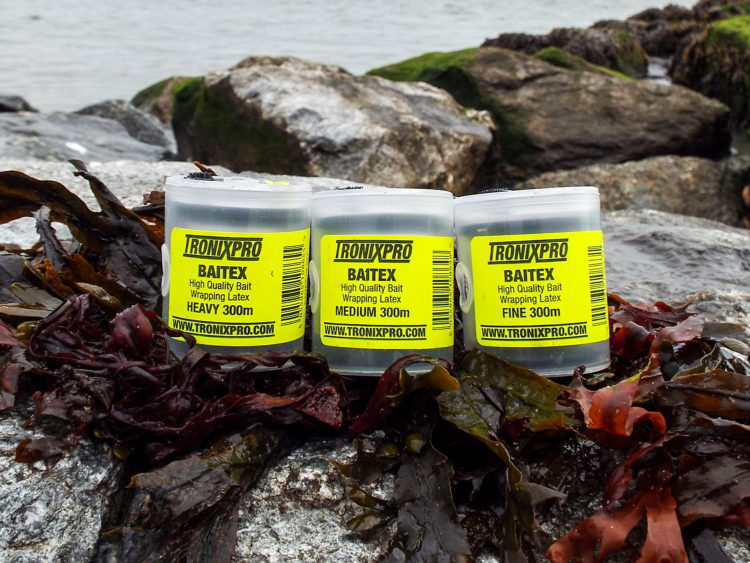 The bait wrapping material is an extremely stretchy soft latex material and has been designed for securing delicate baits as an alternative to the normal elasticated thread. Baitex comes in three grades: light, medium and heavy. 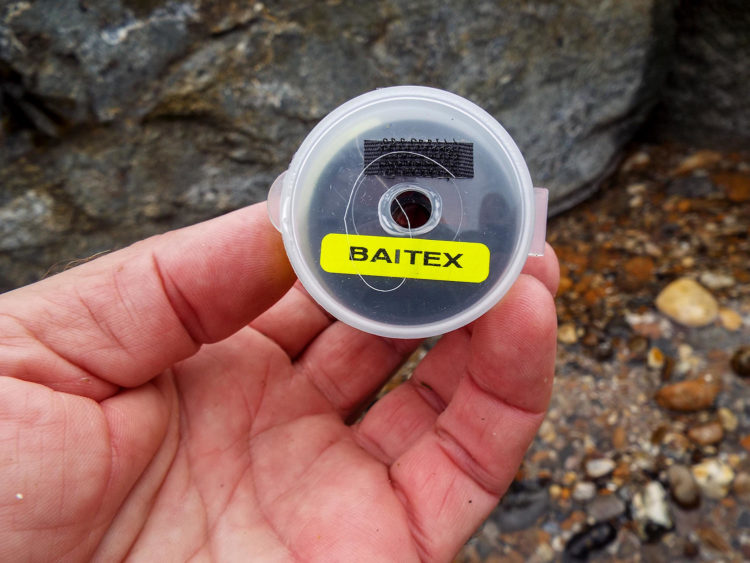 The spools are cotton reel size and hold 300m on each which is far more than a standard elastic thread spool. Each container has a small strip of Velcro attached outside the cap and side apertures to effectively stop the latex from disappearing back into the container.

I tested all three grades to extreme over a period of months with soft baits. The baits covered varied from small strips of bluey and prawn to big squid ray baits utilising the heavy grade Tronixpro Baitex.

Let There Be Light

My first test was the light Tronixpro Baitex spool. I used slivers of bluey on small hooks. I was impressed by the amount of stretch in the latex and for one bait I hardly used anything from the spool. 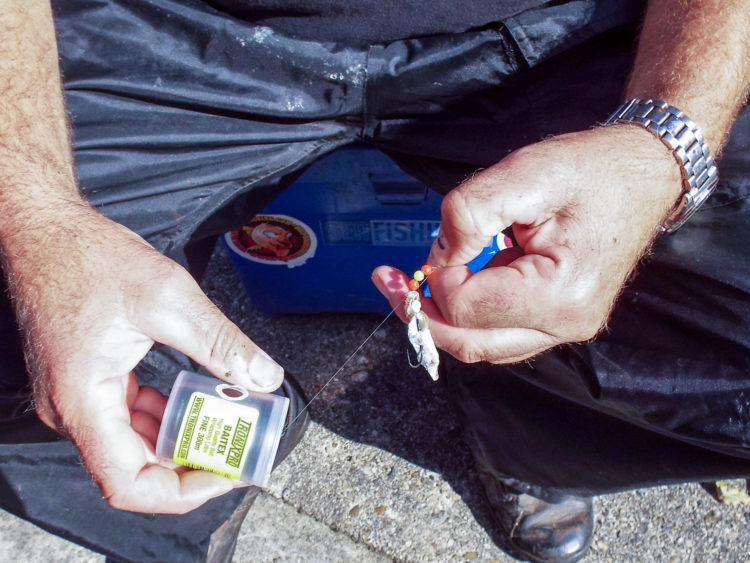 The same went for soft prawn baits, the fine latex wrapped around very neatly and it didn’t cut into the baits. 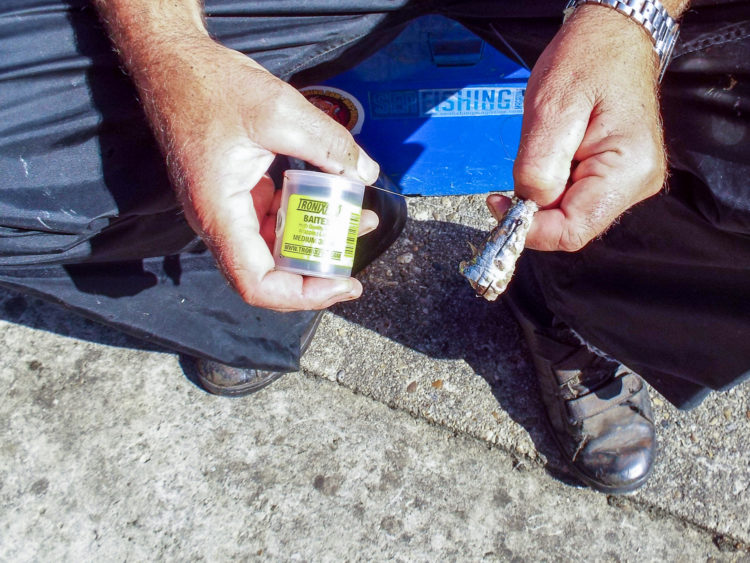 It is stronger than the light grade but still incredibly thin and secured baits to the hook very well.

The heavy grade Baitex is perfect for big squid or fish baits. I found this one the best for my type of fishing, because most of my fishing is casting at distance over shallow beaches with a whole calamari squid attached to a big hook. 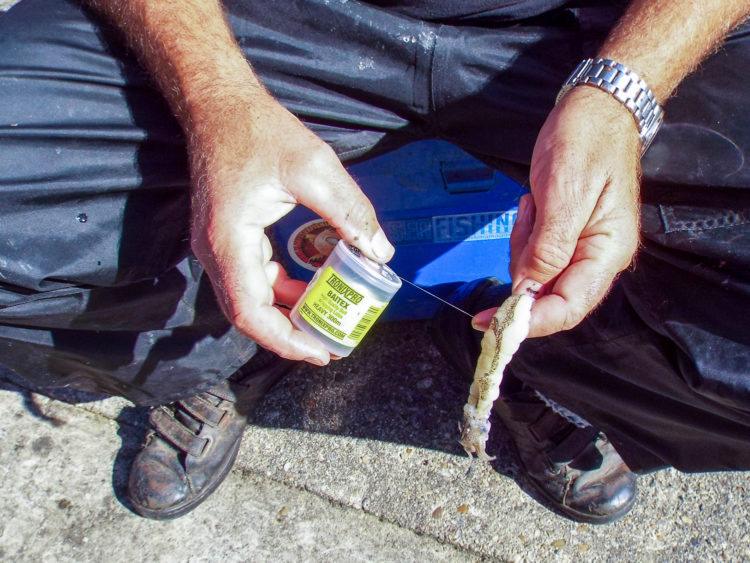 Keeping It Clean and Velcro Security

I have always found with standard spool containers that there is a tendency to lose the elastic in the container and then it’s a struggle to find it again. Even worse using the elastic straight off the spool and then getting it wet and covered in bait slime and not being able to find the end again. 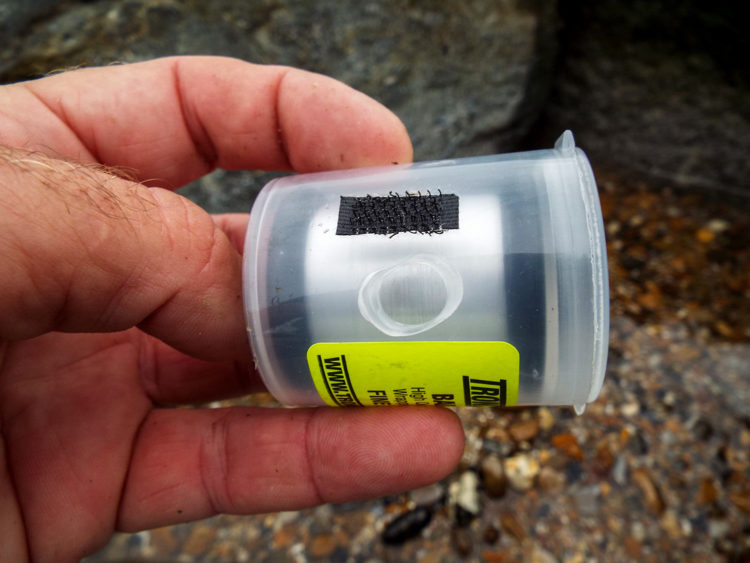 Tronixpro Baitex container with side hole for using with bracket

The small Velcro strips adjacent to the Baitex feed holes keeps the free end from rolling back inside the plastic container after use.

The container itself helps ensure that the elastic is kept clean and unaffected by the juices from baits which can rot the thread over time.

I would certainly use the Tronixpro Baitex in the future. Although slightly more expensive than the average elastic thread one has to consider that this latex has an amazing stretch factor and the 300m on the spool can easily be doubled. Coupled with the handy dispensing container the cost becomes more competitive with some of the other brands of bait wrapping elastic threads. 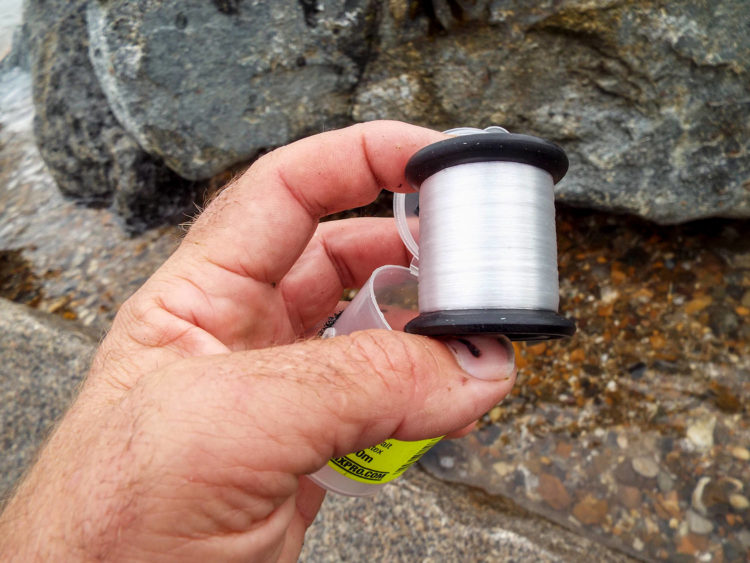 I particularly liked the size of the canisters as they are not so easily lost on the beach or in your tackle box. For someone with large hands like me the Baitex container fits just like a glove!

Tronixpro Baitex can be purchased from most tackle shops and online, RRP £4.99.