Peeler crabs can become an obsession among particularly match anglers who will spend an extraordinary amount of time collecting, storing, and preparing them for fishing use. For many other anglers peelers are something of an enigma, misunderstood and rarely used.

Peelers are certainly not a magical license to catch fish, as they are only of interest to certain species at certain times of year, and an angler using worm or other baits can easily out-fish one using crab in many situations. But with an understanding of when, where and what for, crab can be the difference between a bite-less session and a fish on every cast. 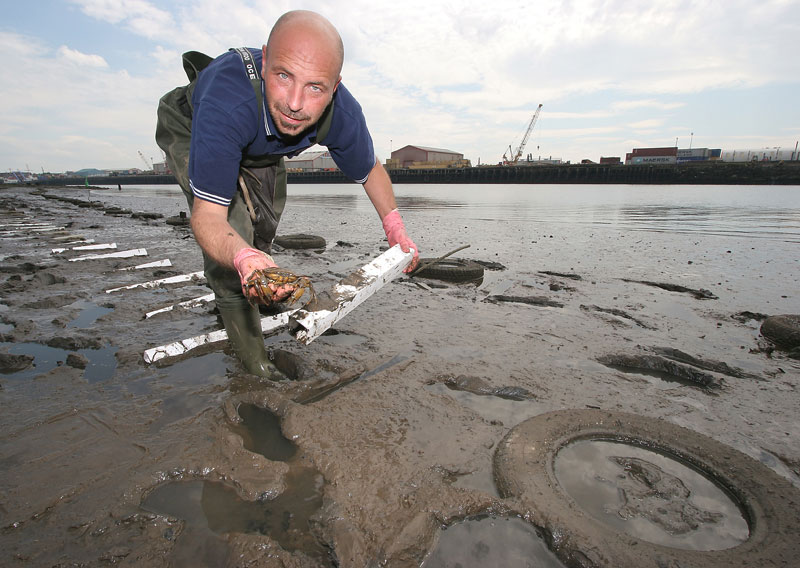 Along my local North East shoreline crab is seen as the top bait for cod and coalfish for most of the year, and for particularly estuary and river flounders and eels during the summer. Crab also accounts for other more opportunistic species such as whiting, pouting, plaice, and dabs. A crab bait disperses a powerful scent trail, attracting fish from over a wide area. Just a few peeled crab legs mounted on a small Aberdeen hook can be deadly for dabs. In other parts of the country a whole peeled crab is effective for smooth hounds, bass, and various species of ray. Wrasse respond well to crab and will even ambush float-fished hardback crabs.

There are 67 species of true crab that live in the seas around the British Isles, from the big and rarely seen ‘giant box crab’ (Paramola cuvieri), to the small ‘pea crab’ (Pinnotheres), the female of which actually lives inside a live mussel shell. The scientific measurement for a crab is across the back of the shell (the carapace), from between the eyes to where the rear legs join. All crabs have 10 appendages including the claws. 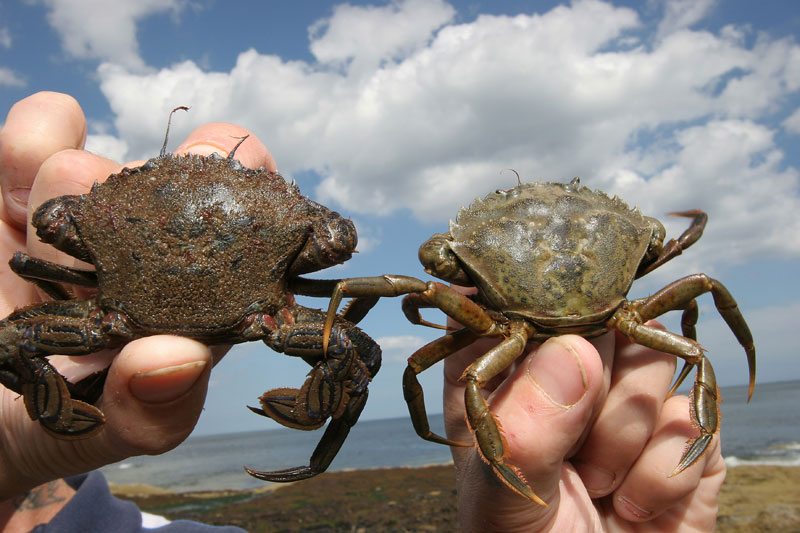 The specie of most interest to anglers is the ‘common shore crab’ – Carcinus maenas (above right) is of most interest to anglers, but the ‘edible crab’ – Cancer pagurus and the ‘velvet swimming crab’ – Necora puber (above left) are also much sought after and excellent baits. The edible crab and the velvet swimming crab are notoriously difficult to keep alive in captivity. They are unable to survive long out of water and are difficult to keep alive unless they are kept in cool oxygenated sea water. There is also a legal size limit for edible crabs, which varies from area to area. In the North East region it is illegal to use edible crabs of any size for bait.

The common shore crab, or ‘green’ shore crab is the most widely used and available of all crabs, and the rest of this feature will focus specifically on them. With the exception of the ‘hermit crab’ the collection, storage and preparation of any crabs is much the same in any case. 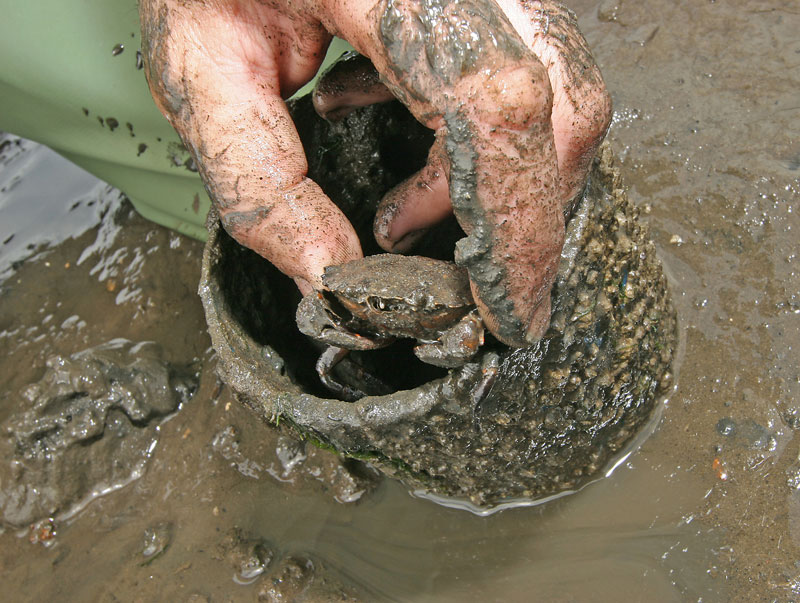 Crabs are Crustaceans. Their soft internal body is protected by a hard outer shell, which is periodically shed to reveal the new softer shell, that has formed underneath. Moulting or shedding occurs as the newly formed internal soft shell expands: water is taken into the body causing the old outer shell to split and finally fall away.

Once revealed, the new soft outer shell takes several days to sufficiently harden. At this time the crab is particularly vulnerable to predators and needs to stay hidden. If you find a crab in this soft stage it is a ‘softie’ or ‘jelly’ and can be used for bait, although it is watery and generally far less effective than a crab at the splitting stage that has been peeled by hand.

There are two main ways to collect crabs for bait, you can either scour a rocky shoreline, turning over boulders and weed, and searching rocky crevices, or you can actively trap crabs by placing sections of drainpipe or old car tyres along the shoreline. 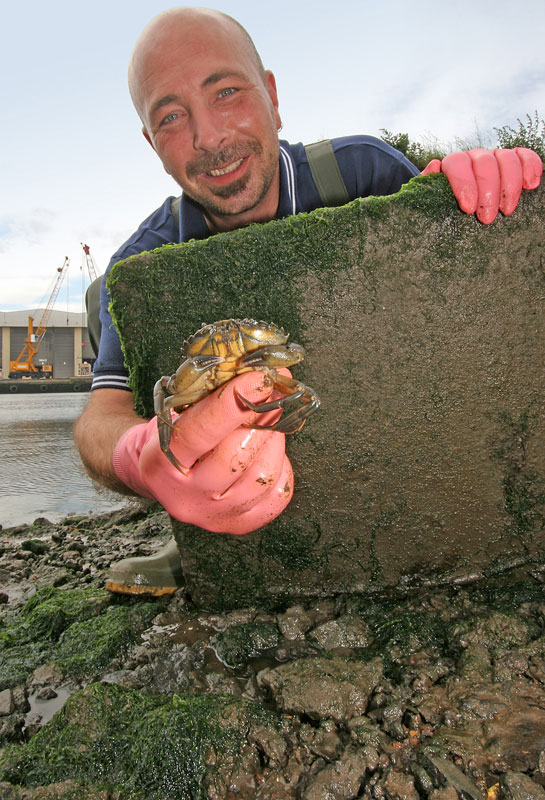 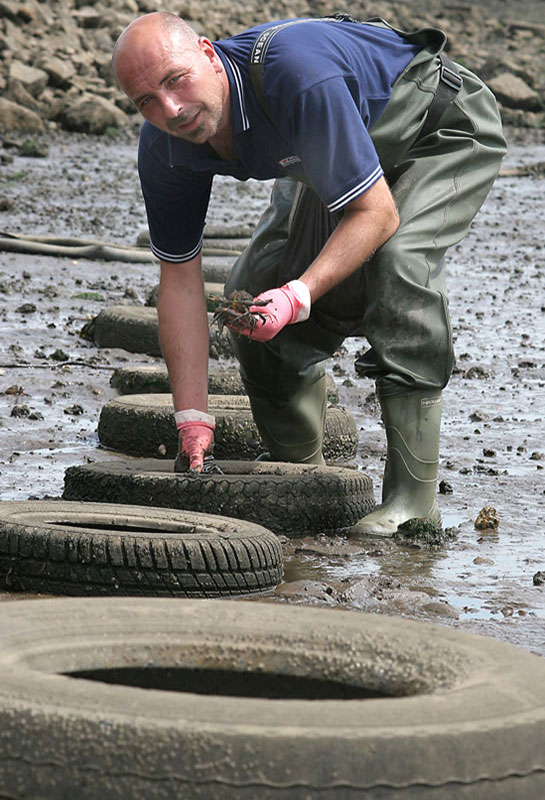 Sheltered harbours or muddy estuaries are the best places to trap crabs. Setting up a bank of crab traps is hard work, but the effort is well worth it in the long run. As long as a good area is selected the traps will return crabs steadily through the summer, with some regions, most notably the southwest of England where the water is warmer, even returning peelers in winter.

Anglers are very protective of their traps and don’t take kindly to uninvited opportunists raiding them. Typically, ‘owners’ will get down to the shore before the dropping tide has revealed their traps to ensure other don’t nip in early and empty them first.

Areas of rocks and weedy boulders are natural traps and havens for moulting crabs. It is essential however, to ensure any lifted or turned rocks are replaced as they are found. This ensures that the natural trap remains effective. Failure to replace rocks is a short sighted folly as those slung haphazardly aside often trap on top of weed which quickly decomposes into a horrible stinking gunk that no crab goes near. Displaced rocks also have a habit of lying flush to the beach with no essential gap for crabs to slip under. 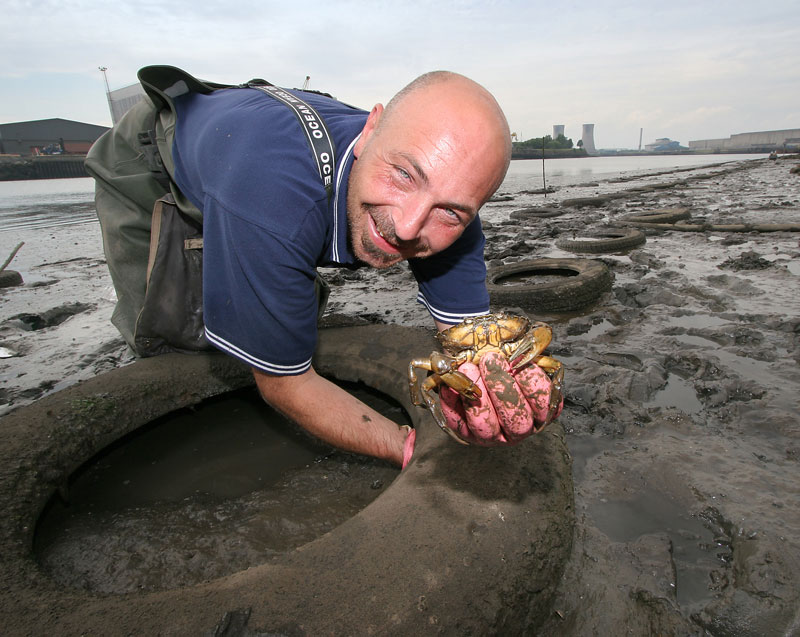 In the North East of England the main peeler time is around mid May when the male crabs start peeling, and there is usually a distinct two-week period of concerted peeling activity. The triggers for this are a discernable rise in water temperatures and daylight hours. Either side of this period there will still be peelers available but in lesser numbers. Some dedicated match anglers travel to different areas all over the country throughout the year when they know that the crabs in that area are starting to peel.

Telling the difference between a male and female crab is straightforward. If you turn the crab upside down and look at the abdomen flaps, the female flap is larger (below left) and rounder than the male flap (below right), which is smaller / narrower with a more pointed end. 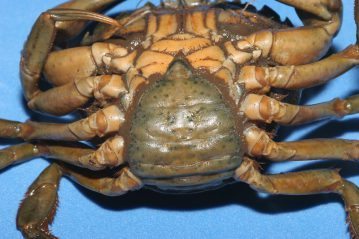 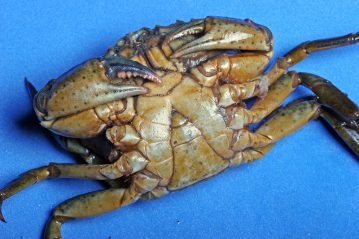 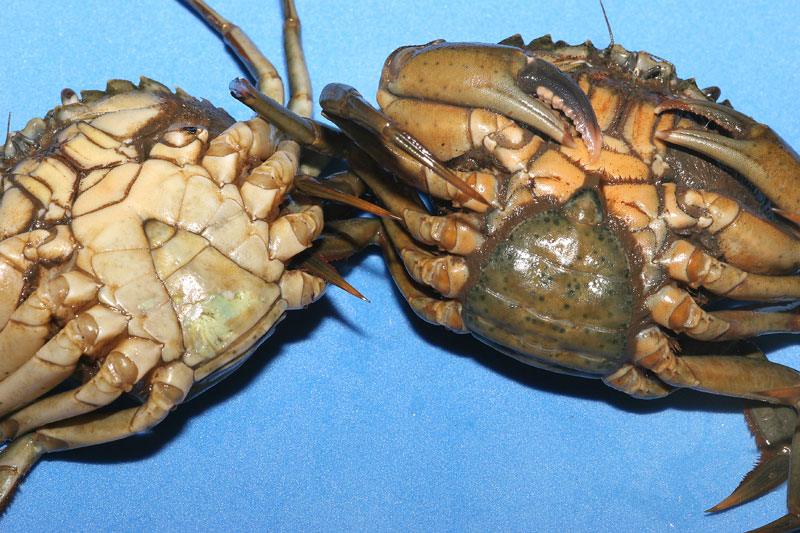 In many parts, by the middle of June the male peeler crabs have nearly all disappeared. July sees the female crabs start to peel when they are often found being carried beneath a larger hardback male crab. This is part of the reproduction process as mating can only take place shortly after the female crab has moulted. The male crab finds a female prior to moulting and carries her for number of days and fertilisation occurs immediately after she has shed.

The female then creates a depression by burrowing in sand, and lays her eggs while positioned
over this cavity. She then attaches the eggs to her walking legs and underneath her abdominal flap and carries them around for several months. At this stage the female crab is referred to ‘berried’ and should be left alone. 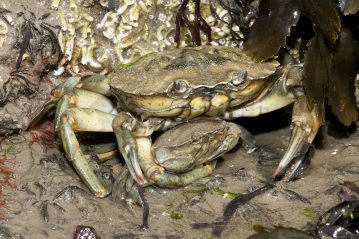 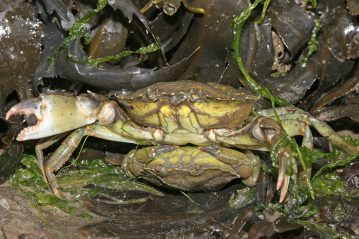 If you find a carrying pair the female crab underneath will either be a peeler or a softie and there is a quick sure way to tell between the two. If the female is carried the correct way up then has not yet shed and it is a valuable peeler. However, if the female is carried upside down and belly-to-belly, then it is a less desirable softback. Crab unearthed a few days after shedding are referred to as ‘leatherbacks’, ‘crinklebacks’ or ‘tinbacks’. These are not much use for bait and should be carefully returned.

Later in the year around late August and early September the male crabs undergo a second peel. Again this is commonly a be a mass peel over a period of several days. The big low tides that occur in September are a prime time for crab collecting in my area when they can be found in large numbers around the lower rock edges. During this time many local anglers will usually take time off work to make the most of it.

With experience it is possible to tell a peeler from a hardback at a glance, although even the most experienced crabbers can’t be sure all the time and will resort to a determining test. The best acid test and failsafe is to gently break off the rear segment of a back leg. This will reveal a soft new leg underneath if it is a peeler, or just strands of white muscular tissue if it is not. Done carefully this test will not harm the crab as the lost part either re-grows or is replaced at the next moulting stage. 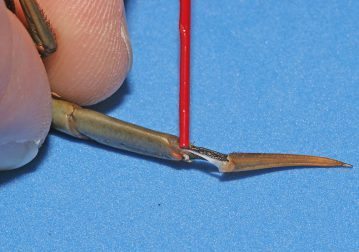 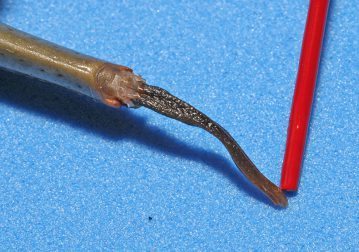 If a full, firm leg section is revealed, the crab is at an advanced stage of peeling and will need to be either used, or peeled and frozen down. If, on the other hand, the test revealed a limp and very watery leg then the crab is in the early peeling stage and not yet ready for use.

Before leaving the beach give the crabs a quick rinse in sea water to remove any muck. A typical crabbing session will provide crabs at different stages of peeling; these need to be stored separately. Keeping live crabs effectively is not difficult but can be time consuming. All you need is a bait fridge, a few large cat litter trays, a supply of fresh seawater, and aerator pump is a good idea too. 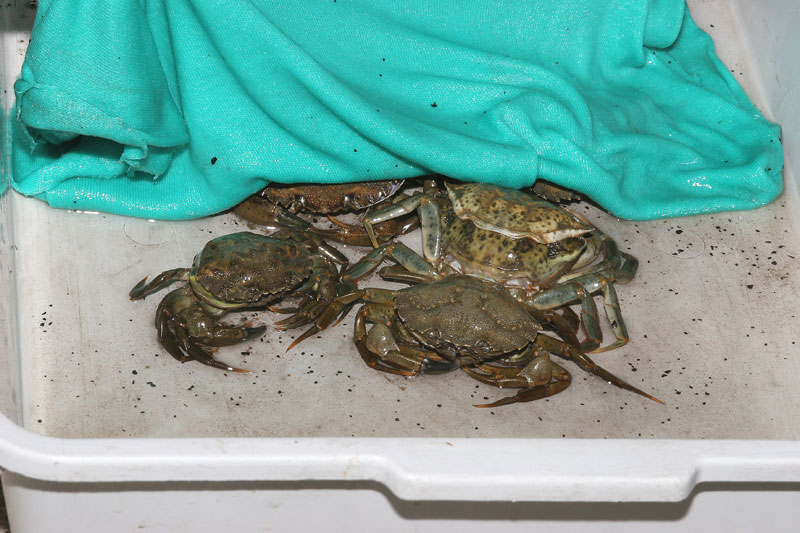 It is important not to overcrowd crabs. Place around 20 good size crabs in each cat litter tray, cover with either some damp seaweed or a damp rag, and store in the fridge set at around 3 or 4 degrees. Crabs should be watered daily. I decant them into a bucket of fresh sea water for a period before returning them to their trays and the fridge. Harder crabs are given several minutes to drink in the fresh sea water, while ‘splitters’ are given just the briefest dunk. If advanced crabs are left in the water too long, they will suck it in and shed their shells before you can stop them, so it is important to check all crabs for advanced signs of peeling.

A crab is ready to peel when a clear crack becomes visible along the side of its body. As the peeling stages advances, the crack begins to widen the softer tissue underneath is revealed. This is when the crab is perfect for peeling and use as bait. Crab won’t remain like this for long and must be either used or peeled and frozen. 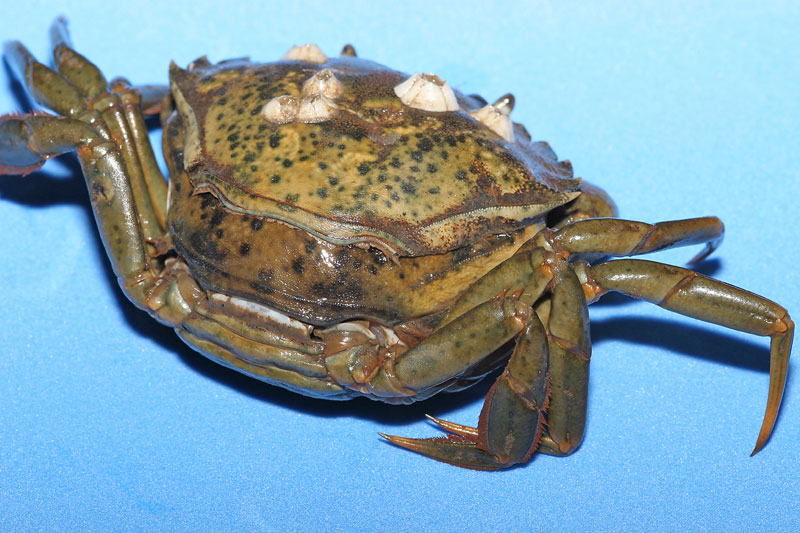 The next stage (popping) can happen very quickly. This is when the top shell lifts right off the soft under-body and the crab extracts itself by moving backwards out of the old hard shell. A crab at this stage is also good for bait, but is arguably slightly less effective than just before.

It is possible to encourage/discourage the peeling process by how often and how much crabs are watered, and also by adjusting the fridge temperature. Indeed harder crabs can be stored out of the fridge, covered with a damp rag and in trays containing just a couple of millimetres of sea water. Crabs given the briefest access to water can be held in check, while speedier peeling can be encouraged by leaving the crabs in water longer. Oxygenating the water via an aerator pump will also speed peeling. 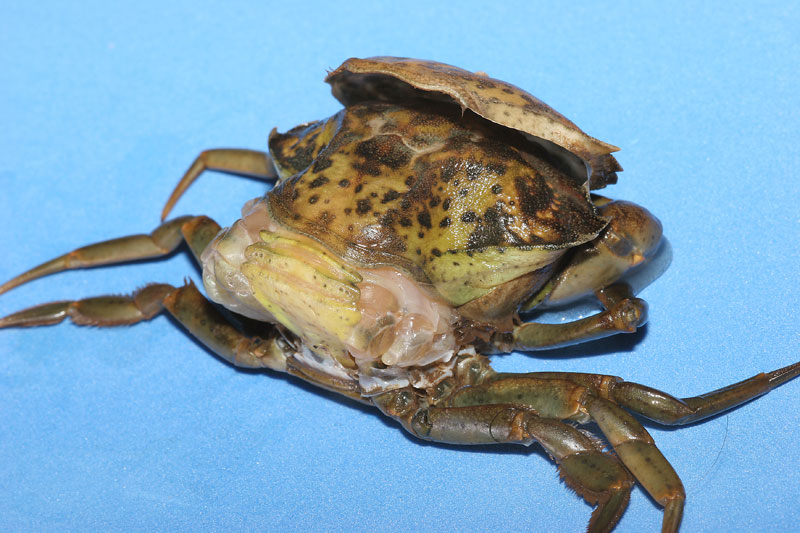 Take care if your bait fridge is one of the older type with a small freezer compartment at the top. Don’t place a tray of crabs close up to the bottom of the freezer box as cold air falls and close proximity to here can cause trays of precious crabs to freeze solid, as many anglers find out to their cost every year.

Part 2: Steve demonstrates how to prepare and freeze crabs, and looks at bait presentation and target species