Shore sport continues to be very unpredictable. Despite recent good catches around Amble the last Amble S.A.C. match produced no fish to weigh in at all. Fish appear on one tide and then move away on the next. Most venues are intermittently producing bags of whiting and flatties to mackerel tipped worm baits, with Steetly Pier, Roker Pier, South Shields Pier, and the rivers Wear and Tyne most popular. Some bigger cod around, with double figure fish from the piers at Seaham. And there is still plenty of time for a big spawning cod anywhere along the North East coast. Ian Hutchinson fished Roker to land a cod of 15 – 08lb on ragworm and mackerel bait during a midweek session, while John Wilson reports cod of 21 – 05lb, and 15 – 01lb from the Twin Steps at Hartlepool. 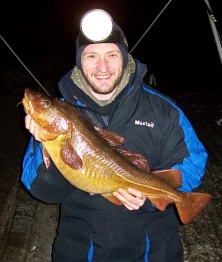 Better bags of cod continue to come from North of the Tyne but results do not reflect the amount of anglers out fishing every night who have failed to catch anything of note. Sean Hildrew fished Cambois to land a 10 – 13lb cod, plus another smaller fish of 5 – 00lb. Mick Welsh fished Whitley Bay Boat Station to land 3 cod for 9 – 08lb – best 4lb. Tony Grant fished Trow Rocks and had a cod of 7 – 02lb, and John Hepton fished Dunstanburgh Castle to take cod of 4 – 14lb, and 4 – 11lb. The Bibles produced a good bag of 4 cod for 18lb – best 7lb, for Lee Smith. Collywell Bay produced a cod of 11lb for John Leveson, and one of 6lb for Stewart Ford. Mick Bell had one of 7 – 01lb from Hadston, and Mark Hanson had a cod of 7lb from Camel Island. Barry Tweddle won a Seaton Sluice match with 2 cod and 1 coalfish for 8 – 02lb from Cambois, while Chris Stringer won a Whitley Bay match with 7 flounders and 1 whiting for 6 – 09lb from Blyth Beach. The last two Newbiggin A.C. matches were won with single fish: Gary Tully won the first with a cod of 7 – 02lb, and Mick Heslop won the second with a cod of 4 – 01lb taken from Sandy Bay.

Another Eastenders Sweep on Friday night saw 2 out of 14 take fish. Gary Pye had a cod of 2 – 12lb for first place, and a cod of 2 – 03lb for third place from Seaham, and Willie Rowntree was second with a cod of 2 – 06lb from Marsden.

The Ryhope club match on Sunday saw 20 out of 108 catch fish. Colin Edmondson fished the Wear to win with 2 big winter flounders for 1235 grammes; Lliam Simpson had 3 whiting and 1 flounder for 975 grammes; Joe Wilton had another monster flounder of 935 grammes (2 – 01lb); and Gary Warwick and John Robson tied for the h.s. roundfish each with whiting of 515 grammes. Top junior was Adam Harriman with 3 flounders for 595 grammes.