In this instalment of our popular bait series Steve Walker turns his attention to cockles, a superb and often overlooked bait.

The cockle is a common and widespread bivalve mollusc, usually found on sandy or muddy ground within estuaries, or sheltered harbours and beaches where they burrow to a shallow depth of just a few centimetres. The shells of each half of the animal feature prominent ribs. There are normally 22 to 28 of these ribs, with concentric growth lines crossing them. Colour of the outer shell can be described as off-white, yellowish or brown, while the inner shell is a smooth white colour. These particular shellfish can live for up to 9 years, and feed by siphoning microscopic particles from the water. 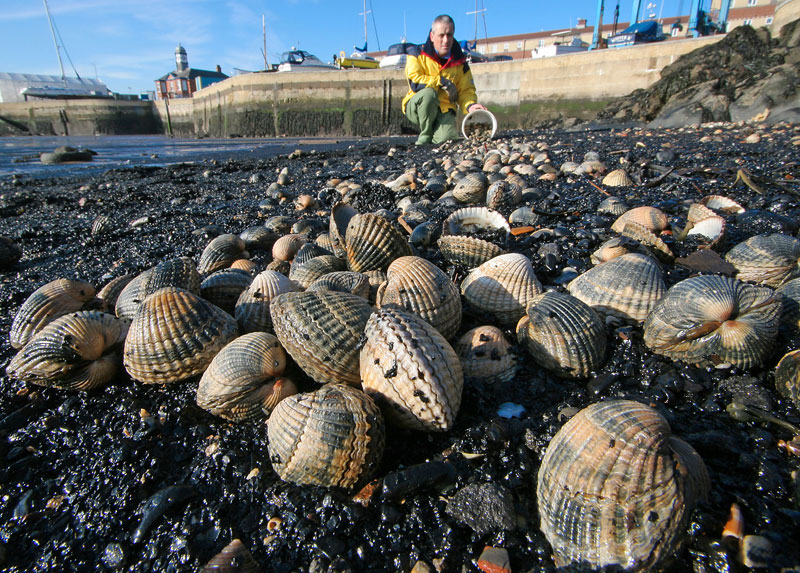 Cockles raked from the sand

Cockles are easy to collect and can be found in huge numbers in some locations. They are an important food source for several wading birds, crabs, shrimps, and flatfish, particularly flounders. They have been a major human food source for many centuries and are traditionally collected by hand raking. Fears of over exploitation by other methods such as dredging has resulted in legislation limiting their collection to hand methods only in Scotland and parts of England and Wales. 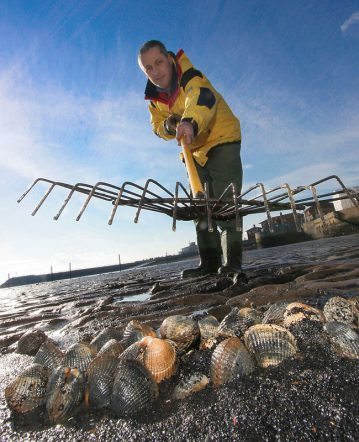 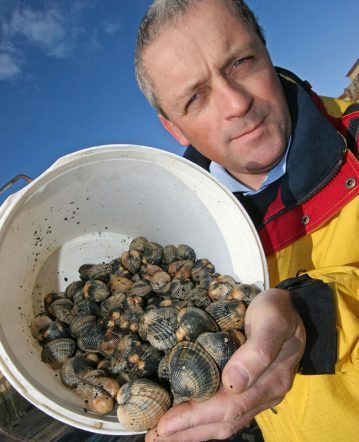 A bucket of prime cockles

There are several species around the British Isles such as the ‘lagoon cockle’, the ‘prickly cockle’, but the common cockle (Cerastoderma edule) is most abundant. A large example of a common cockle would be around 5cm in diameter. Oddly, despite being fairly easy to collect, cockles are under used for bait. I rate cockles as outstanding for tipping off worm baits. They are extremely effective for cod, flounders, dabs, and smaller species that can be targeted using hook sizes between a size 4 and a 1/0. Afloat, they are excellent for a wide variety of species including plaice and ballan wrasse.

In some areas abundant areas collecting is no more complicated than bending down and picking them up, but by and large the most efficient means of collecting is raking. A an everyday garden rake or grass rake is is perfect, or if you are inclined to get down on your hands and knees, a small short-handled hand rake is just the job. 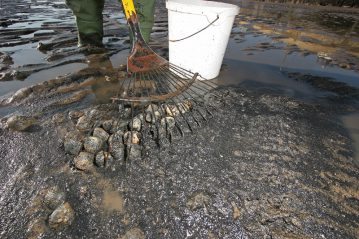 Steve using a rake for cockles 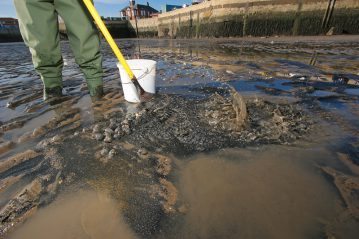 Cockles tend to be near the surface

Twenty or thirty bigger cockles are usually enough for a fishing session when using them with other baits. If time permits, I will remove them from the shells before I go fishing and dry them out on some newspaper. Shelling cockles is straightforward using either a blunt butter knife, or with the aid or another cockle. Press the blade of the knife into the hinge/knuckle between the two halves of the shell and twist. Some anglers prefer to work the blade into the front of the shell – either way works.

Next separate the shell in your hands and remove the cockle meat inside. Alternatively, if you have no shelling knife, take two cockles and push the knuckles into each other at more or less right angles. While forcing them together, twist sharply and the result should be that one of the cockles will unhinge and open, allowing the meat to be removed. Some anglers will quickly blanche their cockles in boiling water to open the shells, but I would advise against this because the often partially cooked result is an inferior bait. 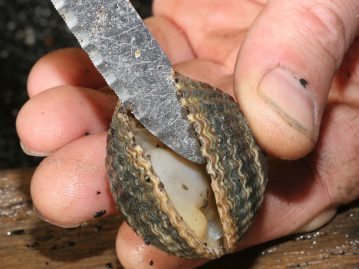 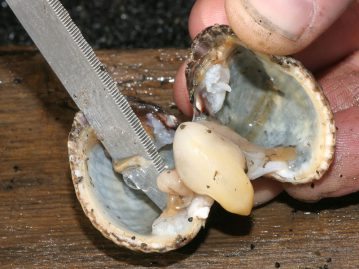 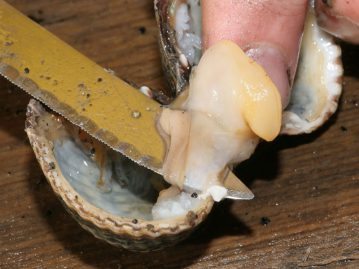 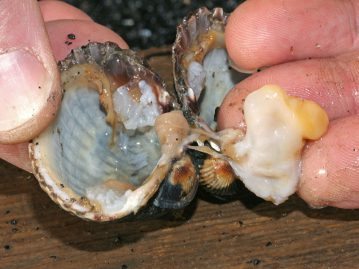 For shore fishing, like razor fish and clams, cockles tend to work best on clean beaches when a heavy sea is dying down. This is when large numbers are dislodged naturally and fish will be expecting to find them. A ragworm and lugworm cocktail tipped off with several cockles is a killer bait for cod on one of my favourite beaches. Used either in a cocktail with worm, or even fished on their own, they are also effective from piers and beaches particularly when flatfish can be expected. Three or four cockles whipped on a size 1 or 2 Aberdeen hook are good for flats and pout, while a crab bait mixed with cockle can be very productive for smaller cod and coalfish. 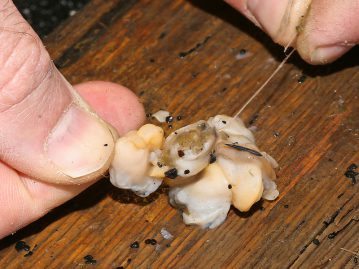 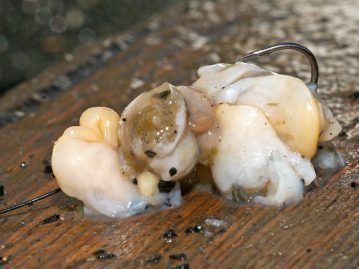 Cockle bait ready for the fish

Frozen cockles are a very good bait and some anglers actually prefer frozen to fresh. Freezing is a simple matter of shelling the cockles, drying them on a few layers of absorbent paper, before popping quantities of maybe 30 in small re-sealable bags, and placing in the quick freeze part of the freezer, preferably on a metal tray to speed the process. It is good policy to squeeze all the excess air from the re-sealable bags before freezing. 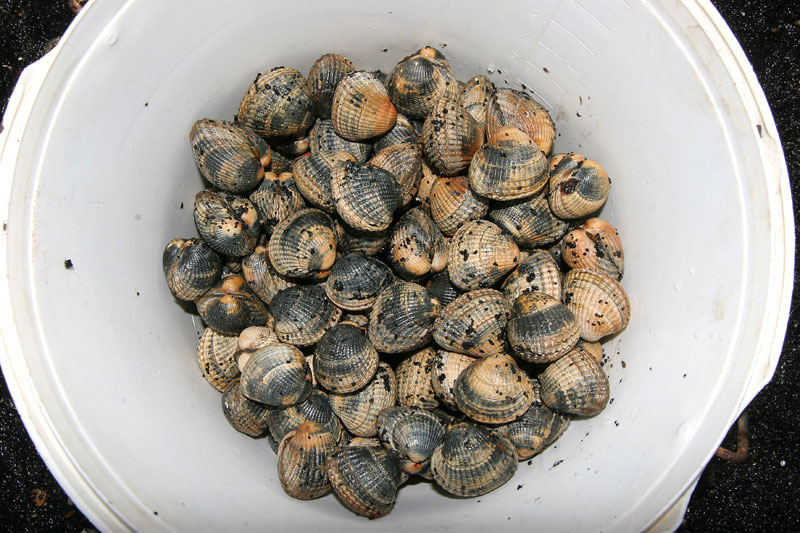 A bucket of fresh cockles

I have also frozen the cockles in the shell, which is the quickest and laziest way to do it. Done like this, when thawed, the shells fall open and the bait is easy to access. However, it should be stressed that the end-product is a far sloppier bait due to the initial water content.

Salted baits are often viewed as old fashioned and inferior, but salted cockle catches fish. To salt, first dry the shelled cockles in paper, before decanting them to a tub where they are covered with a generous quantity of table salt, which get mixed through. Take a suitably sized coffee jar or similar and put 2cm of salt in the bottom. Then put the cockles in but make sure to leave at least 3cm of a gap at the top. Finally put in a further 2cm of salt and screw the lid on. Thereafter the jars go in the fridge and are inverted every couple of weeks to ensure the salt solution permeates properly. Table salt is better for this than rock salt.