Built like a tank, the Penn International TRQ100 reel boasts a magnetic braking system and a mighty 6.3:1 gear ratio among numerous standout features. Des Westmore gets straight to the guts of things. 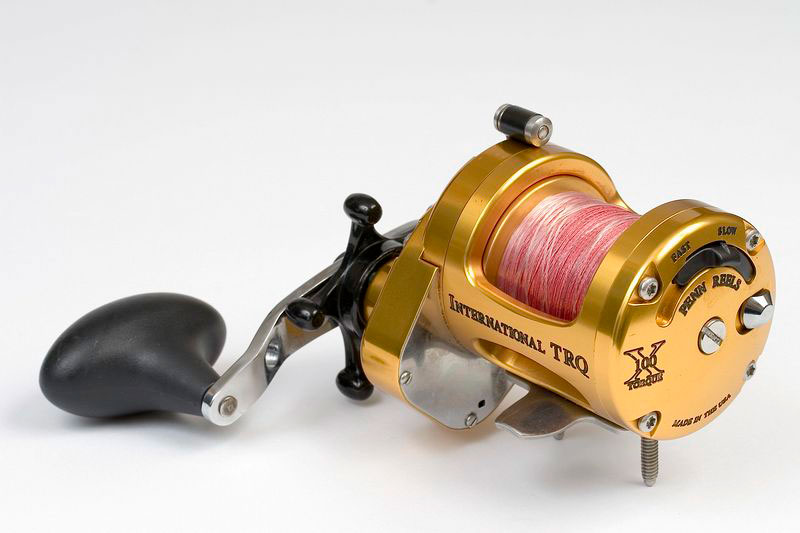 Penn’s Integrated Side Plate (ISP) design featured on their ‘International TRQ’ reels operates so differently that a patent was immediately sought. The Integrated Side Plate does away with the bridge method of mounting the gears, as seen in reels like the Penn Senator or the Okuma Magnetix, while it also replaces the concept of a separate set plate and side plate seen in reels such as the Shimano Trinidad and Daiwa Saltist for example.

Planet Sea Fishing tested the Penn International TRQ100 reel, which is the smallest of the range with a similar line capacity and magnetic braking system similar to the popular Penn 525. The reel is built like a tank with several prominent and eye-catching features, namely the handle, the drag star-wheel for the drag, and the gearbox housing.

The handle is massive for a reel of this size and can be mounted in two positions. It came set on the outer mounting, which maximises the torque the angler can transfer to the reel. The alternative inner handle position makes fast winding easier for maximum benefit of the 6.3:1 retrieve, which equates to 32 inches of line recovery per turn of the handle with a full spool. Spool capacity is 450yds 12lb mono or 550yds 30lb braid.

The star drag wheel, which applies pressure to an eight washer ‘Versa’ drag stack, looks plastic but is in fact robust coated metal. This ratcheted wheel is easy to adjust, while the drag has performed faultlessly with beautifully fluid line payout on demand, to lock down when snagged while drift fishing. 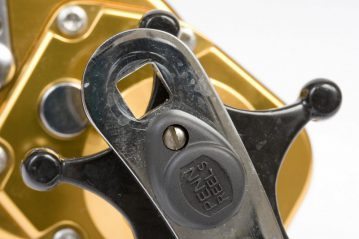 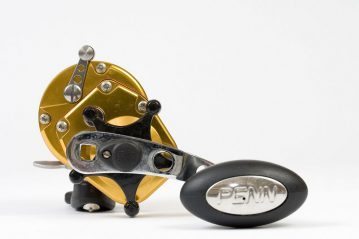 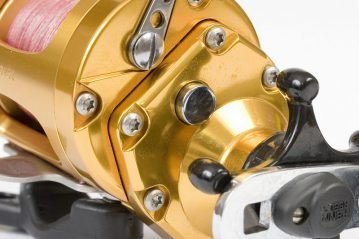 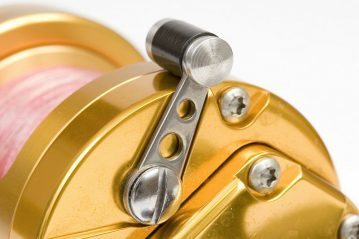 The Versa drag is rated for a maximum setting of 25lb, which is more than enough for any normal UK fishing situation. Interestingly, this is the same type of drag stack assembly as on the Penn 113HN Baja Special reel. The drag washers on the 113HN can be arranged in four different sequences by the owner to give a set of configurations from very high maximum setting where the drag pressure increases quickly with each turn of the star, through to a light maximum setting where the drag pressure increases far more slowly as you wind the star wheel. Close investigation flagged no reason why the TRQ could not be similarly optionally configured, especially as the ISP makes access to the drag easy. None of the boxed paperwork flagged this, but the Penn catalogue does. 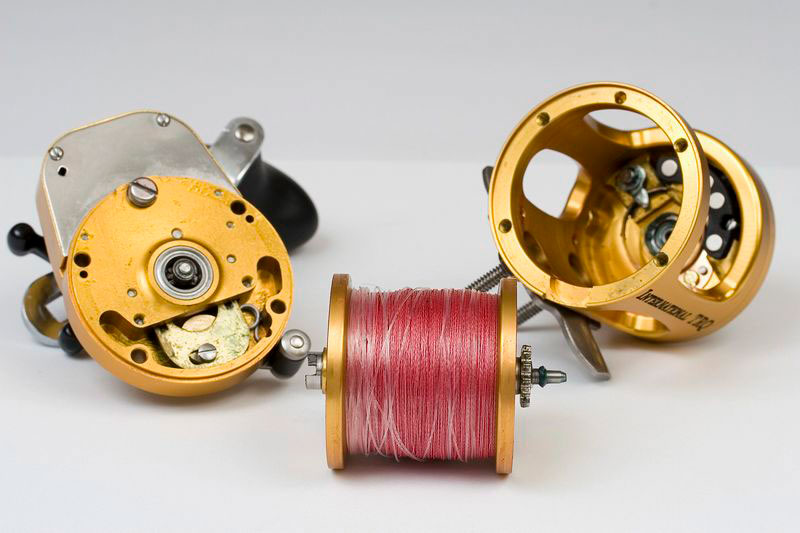 The gearbox is a great big thing for a good reason that becomes clear when the ISP is opened. To do this simply remove the handle and then undo the four inner bolts on the ISP which allows the outer cover to be removed. The ball bearing mounted stainless main gear is correspondingly huge and meshes with a bronze pinion gear. Both gears are heat treated for maximum hardness and longevity. The ISP outer cover, in addition to being fastened by the four bolts, is located by two close tolerance dowel pins to ensure perfect alignment of the gears. Underneath the massive main gear is a double-dog anti reverse which backs up the one-way roller bearing fitted on the handle shaft. All this techno-waffle simply means that something has to be seriously wrong for the handle ever to rotate backwards. 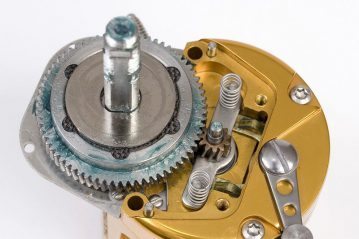 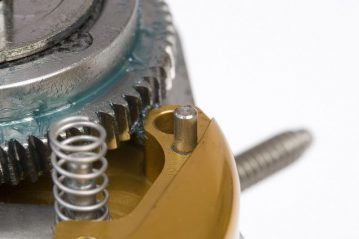 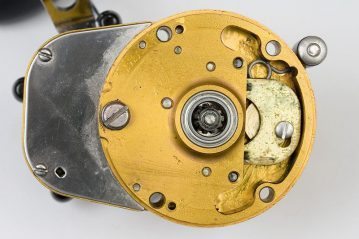 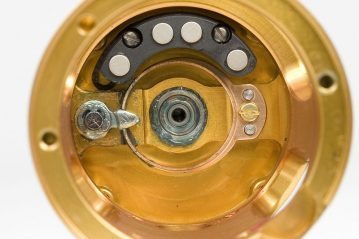 The pinion gear totally disengages from the aluminium alloy spool when the stainless steel eccentric lever is moved to the free spool position. This is achieved by mounting the pinion on its own shaft running on two more ball bearings for perfect alignment. The spool has its own shaft mounted two more bearings. The double-dog system means that the reel is not silent and it ticks when you turn the handle. I prefer reels to be silent, but the ticking on the TRQ doesn’t drive me mad.

The frame, all components, the ISP and left-hand side plate are forged and machined aluminium. There is stainless steel all over the place, including the gear stud, gear sleeve and the reel foot. Indeed, there’s virtually no plastic apart from the ergonomic grip on the end of the handle and the reel clamp.

The left hand side plate houses the line-out ratchet which is loud and a very traditional mechanism. The end-float adjuster and simple magnetic brake control are also sited at this end. It was the incorporation of the magnetic brake meant TRQ100 hit the market later than its bigger brothers the TRQ200 and 300, neither of which have magnetic brakes. 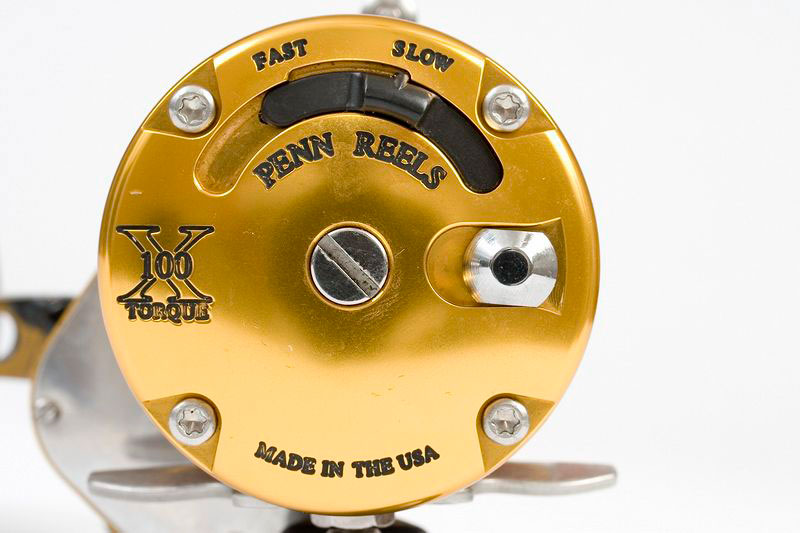 I was pleased with the amount of grease inside the TRQ100, including on the threads of the bolts which all have a Torx style heads and a driver is included. Build quality is paid for in weight… this little reel weighs just 1lb 8oz.

The reel truly is a powerhouse and versatile to boot. I moved the handle onto the inner setting and found the fast retrieve perfect for working shads and lures on deepwater marks. With the handle in the extended position the TRQ100 could easily cope with downtiding on a 30lb class rod. The drag is bliss: very smooth with real dial in power at the user’s fingertips. The magnetic brake works well for uptide casting, and the level of control would be of particular benefit to less confident casters, or inexperienced uptide anglers generally. For downtiding, the magnets can be cranked to full, and the lead allowed to freefall to the bottom without the need to stop the spool with your thumb. The exterior finish is still excellent after several fishing sessions.

What would I change?

A top quality reel and there is little I would want changed. But as a fussy old salt, the ‘ticking’ rankles, and I would like the reel to engage drive automatically on turning the handle. The handle is not counterbalanced currently though, and I accept that the uptake of such a feature could court cas
ting problems. A levelwind option, particularly for lure fishing applications, would be popular addition to the TRQ range. 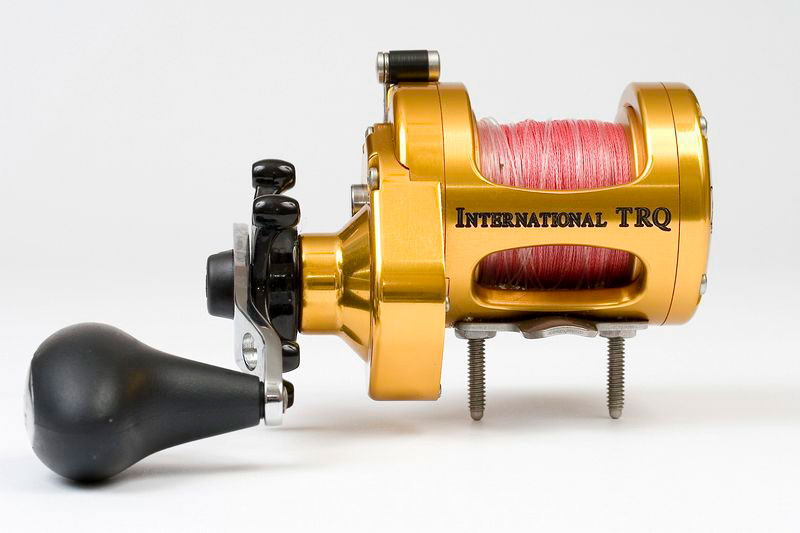 This level of pure quality and reliability usually comes at a considerable price. With a scary RRP of £394.99, the TRQ100 will be beyond the budget of a great many anglers. But TRQ is worthy of serious attention if you have a spare 400 quid burning a hole in your trousers. The combination of superb star drag, massive winching power, high speed retrieve, magnetic brake and machined from solid components offer a package of features that blend into one of the most versatile reels I have handled. If your interest is perked, shop around as there are lots of good offers and better prices out there. TRQ100 and 300 lever drag versions are now also available.

Conger fishing out of Dartmouth on Samuel Irvin 3