Noticeable advances in component machining processes mean quality reels of this ilk are now stronger and sexier than ever. This has led to reels of a generic 6000-size (capacity of around 200-250m of 0.35mm mono), being used in situations that only ten years ago would have demanded a larger reel.

Daiwa have been represented in this category for around three decades by the Millionaire range. Originally with fabricated frames, the range progressed to die-cast frames and eventually to machined frames on reels such as the Millionaire CVZ-300. Though not available in this country, Daiwa also made a sexy blue and gold reel that built on the CVZ and was known as the ‘Millionaire Bay Casting Special‘. Development work with that reel has lead to their latest incarnation, which, despite its heritage, is not dubbed a Millionaire but goes under the name of Team Daiwa (TD) Luna 300. 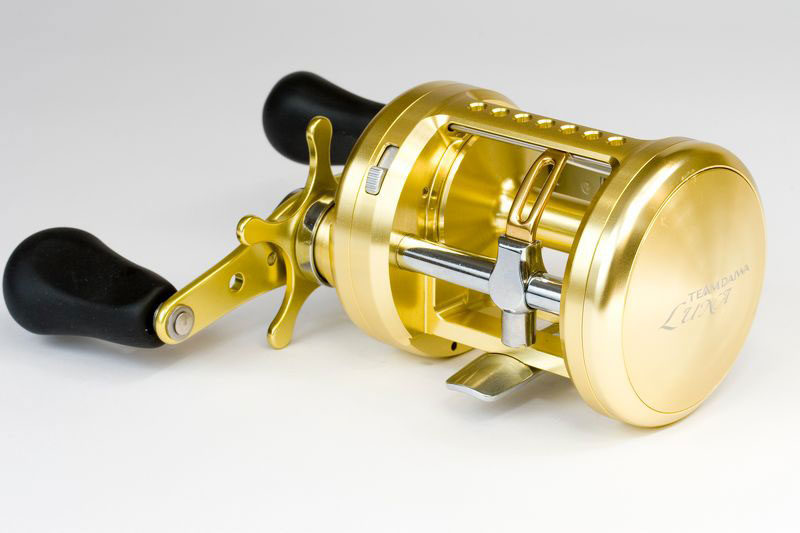 First impressions are positive – it appears solid and is silky smooth when you turn the handle. Gold reels aren’t everyone’s cup of tea but the TD Luna’s Hard Anodised finish strikes a good balance and doesn’t look too ‘bling’. There aren’t many external controls on the reel, and the left hand side-plate is completely flush. A knurled cap to adjust spool float is sited on the right-hand side-plate, while a ratchet/clicker is cleverly positioned on the forward right-hand edge of the actual reel frame. Positioned thus, it is unlikely that the ratchet will be accidentally engaged as often happens when the switch is either sited on the side-plate face or on the inner edge nearest the angler. Free spool is achieved with a thumb bar at the rear of the reel rather than by push button or lever. Thumb bars tend to be a love or loathe item, but I like them personally. Drive is re-engaged by turning the double-ended paddle-style handle. Normally I would prefer a ‘power’ handle, but the Luna’s ‘throw’ is big and the paddles are large and grippy enough for me to live with.

A good-sized star drag wheel is fitted along with a titanium nitride coated, non-disengaging level-wind mechanism. Outwardly this reel is simple and un-cluttered, but it’s what lies beneath the surface that singles the Luna out as special. Gaining access to the inside of this reel is a two-stage affair: first, via the left hand side-plate. There are no visible fasteners, and all you do is twist the side-plate off… a bit like unfastening a jar. This provides access to the level-wind drive, and also the centrifugal brake, which is protected by an O-ring seal. 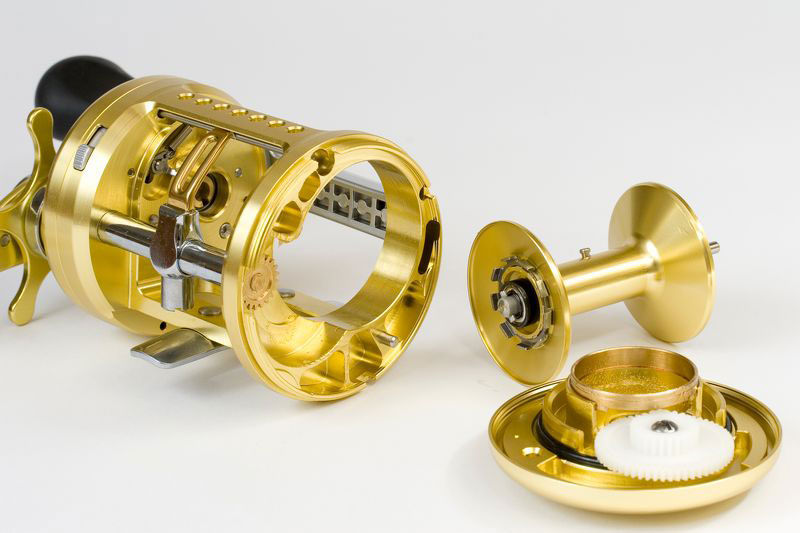 The unique brake, or ‘Centriflex’ automatic centrifugal system is worthy of note as there are no brake blocks to lose or fiddle with. To adjust the brake simply turn the blue plastic ring in the indicated direction for more or less braking. This moves the fulcrum point of weighted arms that are thrown outwards against the brake drum by the centrifugal effects of the turning spool – very neat! With the side-plate removed, you start to see the complexity of it and the frame; both of which are machined form solid aerospace quality aluminium bar stock, as is the right-hand side-plate and the spool. 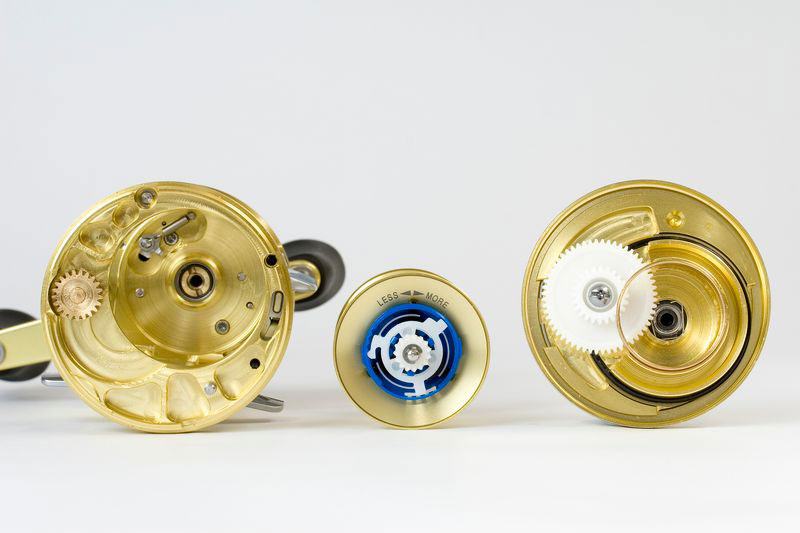 Removal of three screws releases the right-hand side-plate and accesses the clutch and drive train. The inside of this side-plate features a one-way roller bearing and a small spindle which protrudes from the spool tension cap. The purpose of this spindle/shaft is to carry the ‘Dura-Loc’ pinion gear between two ball bearings, allowing the spool shaft to float freely between two further bearings. The spool shaft in turn does not support the pinion gear achieving two things: the spool runs more freely, and the gears are held in better alignment. All ball bearings in this reel are of a corrosion resisting design. 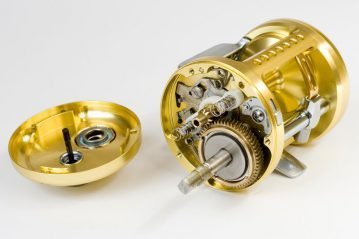 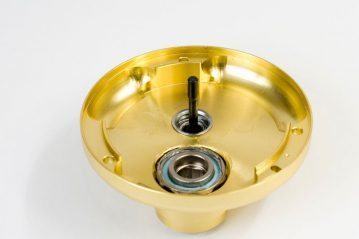 Both pinion and main gears are of solid brass. The main gear also houses a powerful drag with no less than eleven washers of fibre, composite and steel. This is probably the toughest, smoothest drag on any reel in this class. All the other major components look to be up to the job and there is a reasonable coating of grease. The set-plate (inner side-plate) is incorporated into the frame with all the drive train components mounted to it. This makes for a very rigid set-up and the gears are well sealed from saltwater. 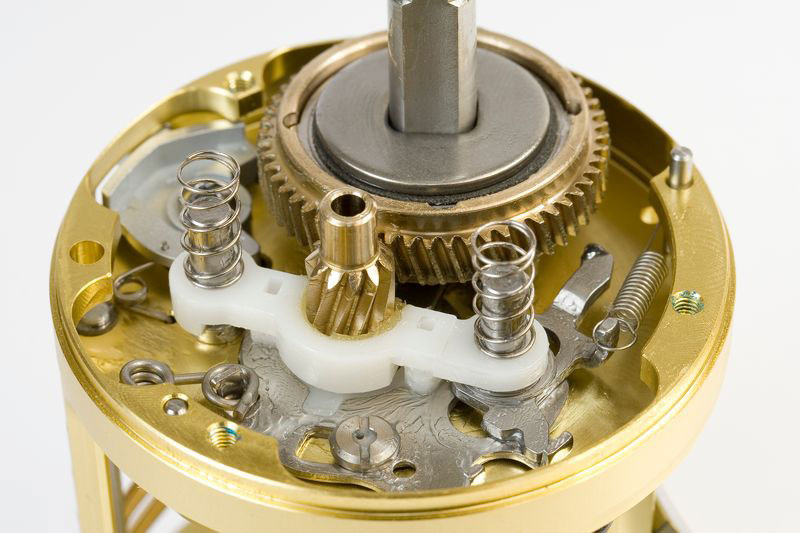 If there’s a negative

It is a bit disappointing then to see that the design has been compromised somewhat by the ratchet clicker. The mechanism pokes through the set plate and the gap created is perfectly positioned to take any water thrown off the lip, from the spool and straight into the gears. It’s a minor point that didn’t give any problems during testing but is a shame none the less. A dollop of grease on the mechanism would most probably close the gap. 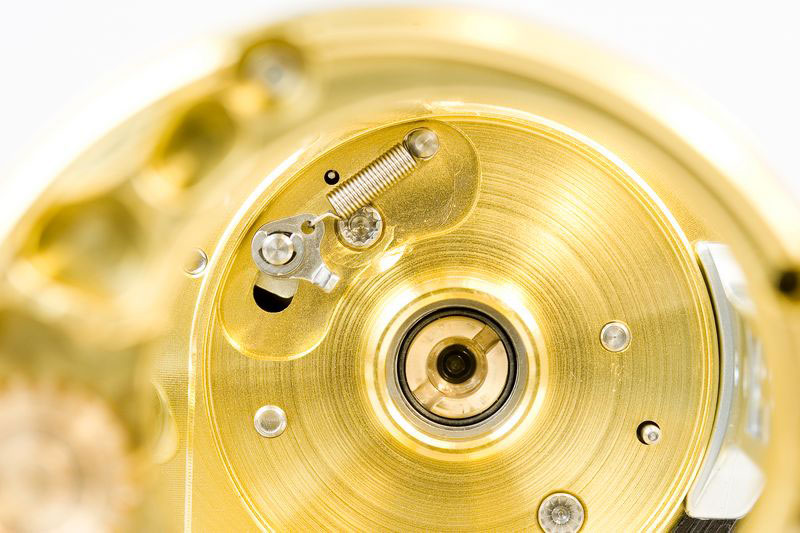 In use the reel is a joy to fish with. The 5.1:1 gearing generates ample power whilst maintaining a good rate of retrieve. I loaded the reel with 19lb braid and used it extensively for bream and pollack both inshore and on wrecks. The weather scuppered plans to use it on some tope fishing, but with its beautifully smooth drag and robust build, the Luna is more than equipped to cope.

The RRP of the TD Luna 300 is £249.00 but I expect it will sell for less – shop around. Given the superb build quality, features, lightness and responsiveness of this reel it is a fair price – my only misgiving, apart from the potential entry of salt via the clicker mechanism, is that there is no anti-reverse backup in case the one-way bearing fails.

Some of the competition sells for less but the TD Luna is 300L is, I believe, the only reel in this class incorporating an integral set plate in its design, in addition to the bar-stock machined frame, side-plates and spool, as well as an eleven washer drag system. Previously, the top reel in this category was probably a gold reel from another well-known Japanese manufacturer, but the balance of power may just have shifted.

Full schematic for this reel is available here