Speculation is rife that the new Ian Golds Igloo beach shelter is the best to hit the market bar none. Early demand is massively outstripping supply, and in this exclusive Planet Sea Fishing review Steve Souter takes a detailed look at the innovative shelter that’s got everyone talking. Check out the video too, which shows just how quickly it can be erected.

Beach shelters are traditionally infuriating things with the power to turn the most mild mannered sea angler into a profanity spewing monster who would perhaps be better housed in a padded cell. Shelters have never been the easiest items to erect,with screaming frustration and flailing octopus limbs par for the hellish course. Problems are compounded in strong winds, which habitually sweep the wide open spaces where sea anglers ply their trade, and two pairs of hands are often the only failsafe way to get even the most reputable shelters upright. If all of this sounds horribly familiar then you want… no, you NEED, an Igloo. 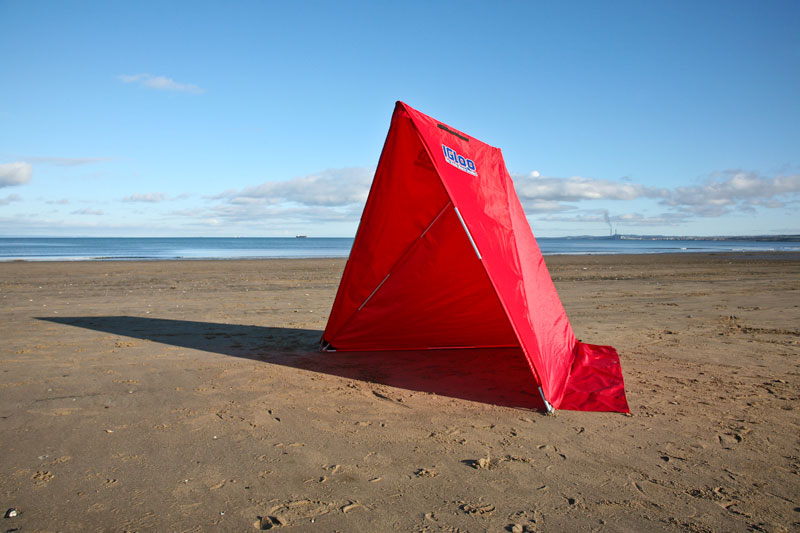 The brand new Ian Golds Igloo beach shelter is a different animal that introduces simplicity and speed into a task that few anglers are fond of. The design of the Igloo is largely triangular, and much more efficient than the dome and bubble-shaped alternatives that we previously had to make the best of. When positioned correctly, the angular shape not only serves to cut the wind, it also ensures that rain slides straight off and cannot gather in heavy puddles on top of the structure.

It is important to stress that the Igloo that Planet Sea Fishing had for trialling was an advance sample, and the finished production model benefits from a couple of minor design improvements. In its packed state the Igloo measures 7ft in length, and there is no billowing of the cover fabric to add bulk thanks to three Velcro straps that securely wrap the shelter around the top, middle and bottom. 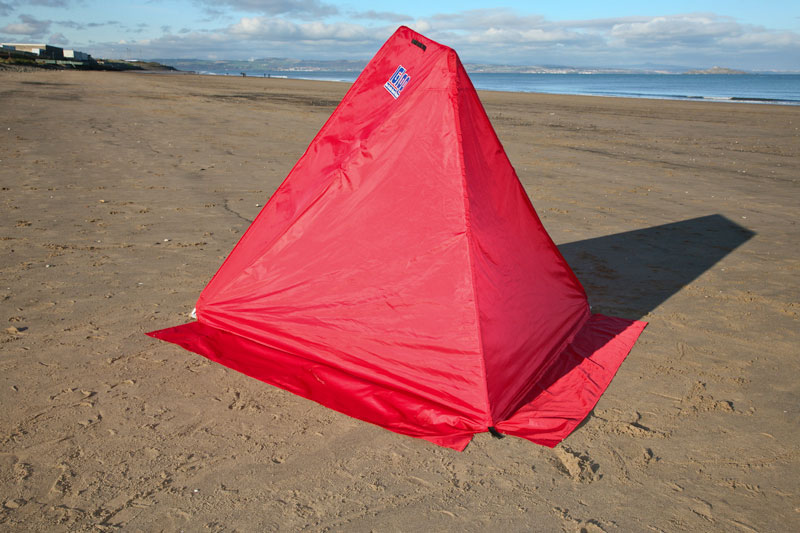 The best way to transport the Igloo is in a zip-up rod carrier rather than a quiver type. A zip carrier allows the Igloo to be placed internally and thereafter easily removed; thus avoiding potential damage to rods sharing the same space. Quivers are not ideal as both the shelter and rod rest have to be strapped to the outside to avoid rod scarring and busted guides. I found that two rods and an Igloo easily fitted inside the small Ian Golds rod carrier, while I am assured that at least three rods and two Igloos are swallowed by the large rod carrier.

Up in a flash

As the video shows, erecting the Igloo is a piece of cake. There are two or three different working orders to getting the shelter set up – all are fine – but this is the one that I favour. Lay it flat on the beach and undo the three straps. Ensure that the open end is facing upwards, and kick the sides out into an open ‘V’ shape. Step to the left-hand side, reach down to pull up the front of the fabric cowl and the shorter roof strut/pole. Place the unattached end of this pole into the receiving bracket joint inside the cowl and press down towards the ground – an audible click will be heard and felt as the connection makes.

Now step into the front area, pulling up the canopy and the longer, loose back strut/pole. Place the free end of the pole into the rear roof bracket junction and push to lock it into place – if you listen carefully, this connection can be heard ‘clicking’ securely together on the video. From un-strapping the Igloo to getting it fully upright takes around 15 seconds… a far cry from the tribulations of other shelters. Conversely, the Igloo can be collapsed even more quickly.

A framework of eight one-piece alloy poles is secured with standard Nylock nuts and covered with hard-wearing waterproof fabric. The frame is held together via front and back roof junction plates, a rear floor plate and further swivel-plates that tie the poles at the front. All seams and edges are taped and weather-tight. Generous fabric skirts run the full length of both sides, with the Velcro wrapping straps stitched to the facing right-hand skirt. 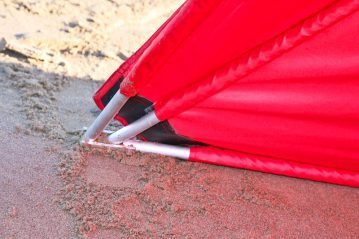 Securing the shelter on a shingle beach, or one fringed by copious amounts of loose dry sand is a straightforward matter of scooping enough material onto the skirts to nail it to the floor. I tested the Igloo on a beach of hard compacted damp sand and immediately realised that I had a problem weighting the shelter down. The sand was too hard to scrape with my feet and a sure recipe for broken ankles. And I had neglected to take an empty bucket for the purpose. I would have given much for a little plastic spade at that point and committed the thought to memory. Thankfully it wasn’t too windy; I anchored the thing by pulling the skirts inside and dumping my gear on top of them… like you might do on a pier or breakwater.

How big is it?

Make no mistake about it this is a big shelter, and actual size perspective can be lost in a product photograph that doesn’t offer a scale comparison.Fully extended the width across the front opening is 245cm or a little over 8ft. Height at the front peak is 170cm or 5 ½ ft tall, with a front-to-back depth of 6ft. All told, that is enough room to envelop two anglers and all their clutter. At 8.5 lbs / 3.85 kilos the Igloo isn’t lightweight, but it is certainly no heaver than the current crop of popular beach shelters. 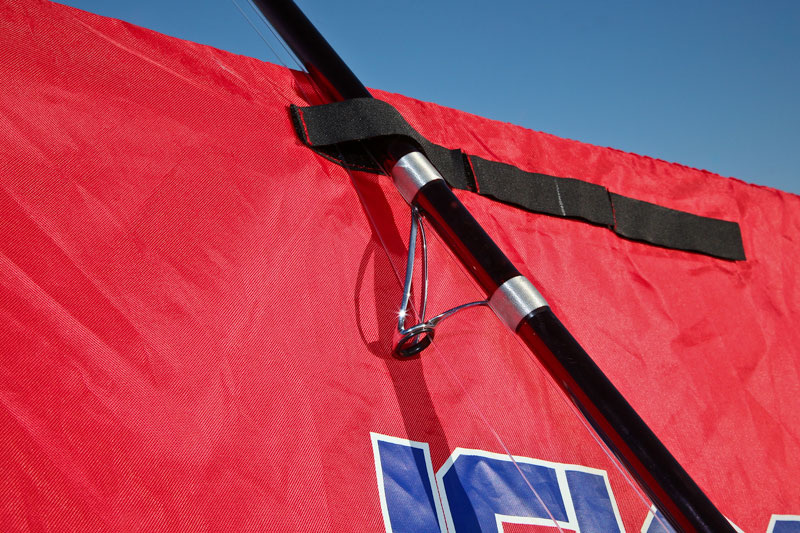 Three little Velcro retainers are stitched centrally along the top of each side panel outside. These take spare rods which might otherwise be left on the ground for careless feet to tread on. There’s a stitched-in webbing lug at the rear to tug the material straight should it start to ride up the frame, and a carrying strap is attached. Something of interest to tournament casters and anglers fishing from grassy banks is the production Igloo includes a set of three sturdy plastic ground-pegs which are attached to the unit via cords. There are also plans to produce various Igloo-specific fishing accessories.

The Ian Golds Igloo is available now in red, blue and black, but stocks are limited and anglers are advised to get off their mark. A camouflage version is also in the pipeline. 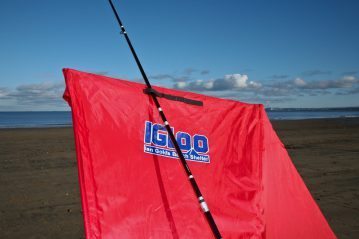 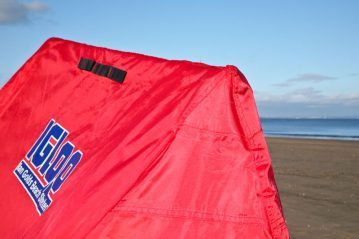 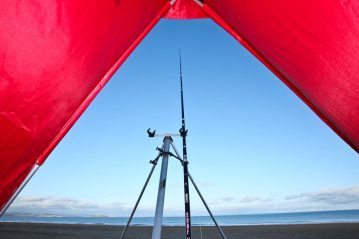 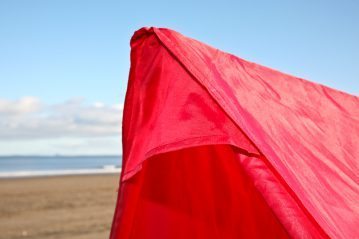