They smell like month-dead mackerel and are intended as freshwater predator baits, but Chatter Tail lures from the Fox RAGE stable are equally at home in the sea. Boat fishing specialist Steve Souter gave them a thorough workout on a trip from the Northern port of Scrabster.

Fox Chatter Tail lures in the popular RAGE product range are interesting for a number of reasons. For a start they are unlike any soft plastics that I carry as a matter of course, and like several of the soft lures in the Fox RAGE range they are heavily scented with real fish oil. Are they smelly? They are absolutely honking! I foolishly opened a pack while sitting in front of the telly and the stink was such that I was immediately thrown out of the room. 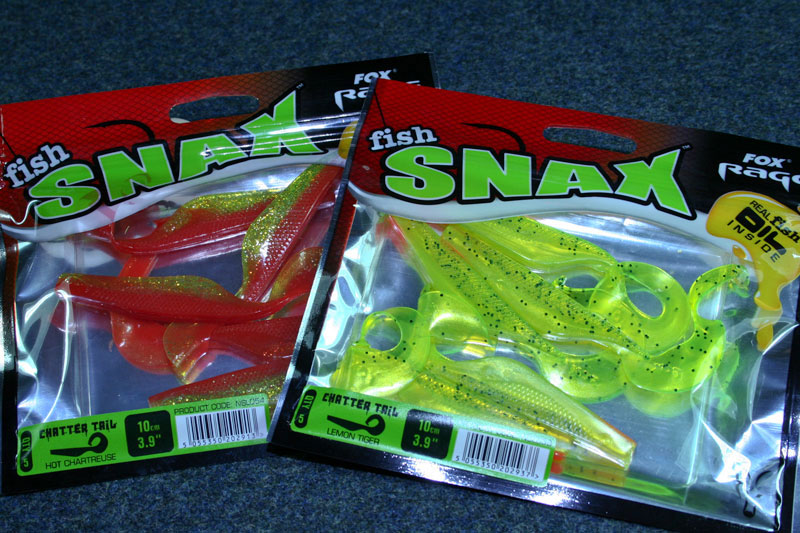 Fox describe the lure as a hybrid design based on a slim-line ‘shad’ body and a pronounced ‘twister’ tail. Available in a 10cm size only, Chatter Tails are sold in packs of 5 and come in a comprehensive range of 15 different colours. There is no doubt that these lures have wide appeal from a shore fishing perspective particularly for pollack, wrasse and bass, but as it was, I put them through their wet paces during a day’s experimental boat fishing out of Scrabster.

I worked with the Lemon Tiger, Hot Chartreuse and Silver Pearl colours and caught numerous pollack, several cod and a couple of unexpected ballan wrasse on a 10ft fluorocarbon trace. Chatter Tails can be mounted on jig heads, offset shank hooks such as the 2/0 Lunker City Texposer – which is an absolutely perfect match – or just fished on a standard straight hooks. 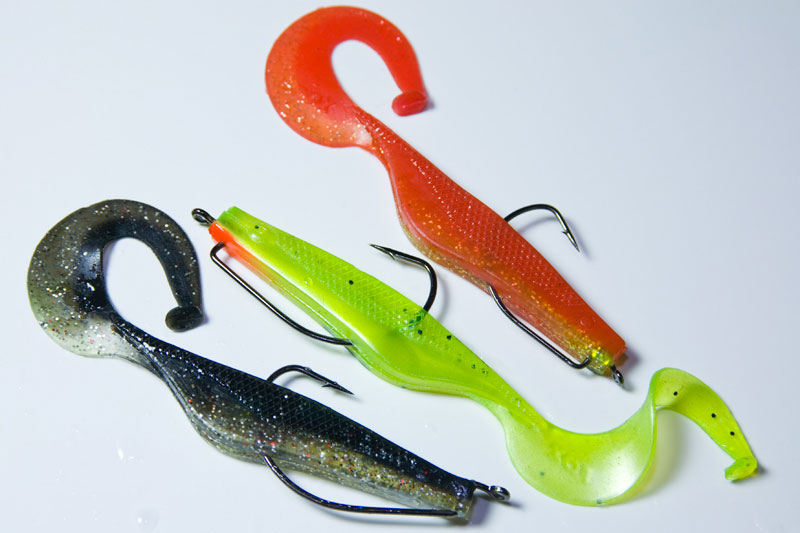 If you have never worked with an offset style of hook before it can be a but fiddly to begin with but fitted correctly so as not to stretch or compress the body of the bait, they are designed to ride clear of the lure, affording it an amount of ‘keel’ which should tether the body perfectly straight, dramatically assist the swimming action and allow the tail to work properly. The body of the lure is slotted top and bottom to accommodate offset shank hooks.

The tail action in the water is a mesmerising whirl, resembling an electric corkscrew, and minimal rod/reel work is required to bring this lure to life. A steady shove of wind and tide meant the boat drifted well and I regularly banged fish within between 6 and 10 turns up. At one stage the boat was moving swiftly across the ground and I didn’t even retrieve… I just wound up eight turns on the reel and held the lure suspended. I took pollack steadily on the Silver Pearl (black) and Lemon Tiger (yellow/green), with the best fish around 8lb. 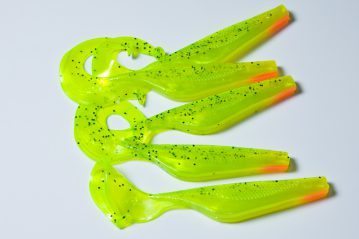 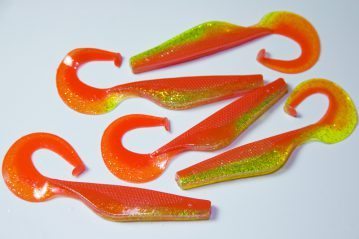 The Hot Chartreuse pattern – which is more accurately largely red with a greeny underbelly – also caught pollack, but worked dangerously close to the rough bottom, it nailed three decent cod on the spin. Of all the available colours the Blue Ice pattern catches my eye and is sure to perk the interest of bass anglers.

I found the Chatter Tails considerably more robust and hardwearing that the likes of Savage Sandeel bodies, which infuriatingly seem to disintegrate if a fish dares fart beside them! I fished the Chatter Tail both on offset shanks and standard hooks, and if there was an obvious difference it was that those fished on the straight hooks tore and perished more quickly after catching fish than those mounted on the offsets. I can’t say there was any noticeable difference in the catch ratios however.

These lures do stink to high heaven and it remains pungent on your hands long after you have finished fishing. But you know what? Fish like the stench and I can live with fishy fingers.