The latest boat fishing rods from the FOX stable are creating quite a stir behind the scenes. Primarily pitched at the bluewater market, globe-trotting Les McBride tested the JIG TREK and JIG TREK XT in Kenya where he concluded these 4-pieces also have much to offer anglers travelling to Norway and Iceland. 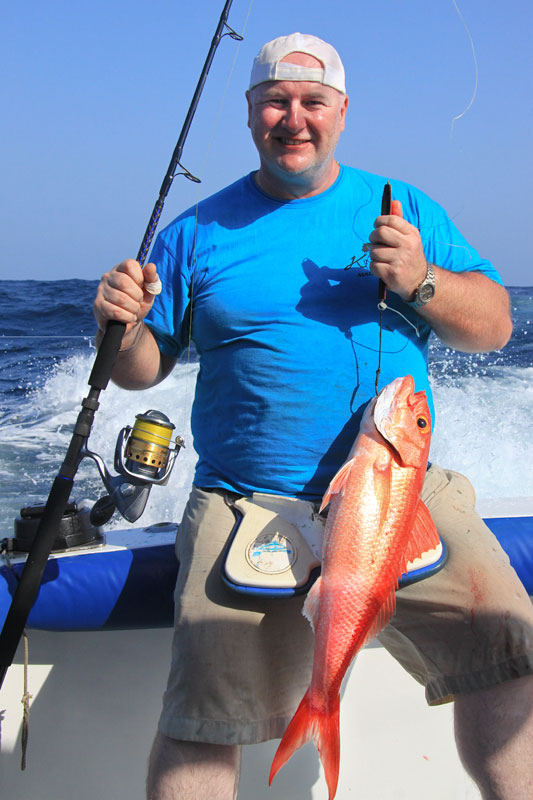 At just 55cm long the hard rod cases will fit into almost any suitcase or holdall, and the case is certainly tough enough to take any of the knocks and bumps associated with airport baggage abuse. The velour bag that holds the individual rod sections is idiot-proof when it comes to what section slots where. I’ve used various multi-section travel rods where the cloth bag has nightmare ‘same size’ compartments, meaning if sections are ordered wrongly the bloody bag won’t fit in the tube because the rings stick out in different directions.

There are two models in the JIG TREK set: the first has a lure rating of 300-400 grams and a line rating of 50lb, while the heavier-duty JIG TREK XT carries heavier 500-700 gram lure rating and an 80lb line spec. Both rods are essentially finished to the same specifications. At 6ft long and in four equal sections, both rods are noticeably light to handle thanks largely to high quality carbon and a lightweight Fuji reel seat. Each section is approximately 18 inches long, fitting together via two spigots on the main blank, with another at the reel seat via the Fuji winch fitting rather like the old modalock design.

With an RRP of over £300 each you would expect and indeed get the very best fixtures and fittings. Six very expensive Fuji Silicon Carbide rings plus tip; quality duplon grips; and a Fuji winch fitting and aluminium gimbal. There is also a small keeper ring near the butt for you to hang your jig from when the rod is not in use. The sculpted duplon fore-grip is ergonomically designed with five indentations for your fingers, while the rear grip is plain black duplon. These super-light blanks are deceptively powerful and shape up as very pokey sticks indeed. The guide arrangement allows use of either a fixed spool or a multiplier.

The finish is excellent. The blanks are dark blue blank with similarly coloured whipping on the rings. There’s just enough epoxy applied in the finish, while the spigot joints are well whipped and would appear to be carbon reinforced. A decorative cross whipping just above the foregrip and a couple of blue metallic rings on the butt adds a little extra bling.

In both cases the JIG TREK and the JIG TREK XT are remarkably lightweight for their power. The JIG TREK rod weighs in at just 395 grams, with an overall weight of just over 1kg in its protective tube. The XT model is only a few grams more. This is fantastic for the travelling angler considering the low baggage allowances and charges at airports these days if you are overweight with your tackle.

Getting Jiggy With It

My fishing buddy Tony Voss and I took these rods with us on our annual trip to Watamu in Kenya. Our intention was to give them a thorough thrashing while jigging on the local deep reefs for hard fighting species such as Giant Trevally, Amberjack and snappers of various kinds, all very strong hard fighting fish. Powerful fixed spools are the reel of choice with most tropical jiggers, as the high rate of retrieve lets you move the lure through the water column at a speed attractive to these warm water species… and you really can’t wind too fast for these mighty fish. I selected the lighter rod which I matched with a Shimano Saragosa 14000 reel loaded with 400 yards of 50lb Power Pro braid. Tony used a Shimano Stella 10000 fixed spool packed with 80lb whiplash braid on the XT model.

The main problem with our ‘jig’ plan was that the Watamu area was experiencing its best run of marlin and sailfish in living memory with almost every boat catching between three and eight striped marlin between 40 and 60kg a day, along with several sailfish during the first week of our stay. You just can’t ask your skipper to fish for snappers when the marlin are playing like this, so the heavier XT model was selected to be used as a pitch bait rod. This is a technique used when a marlin or sailfish pops its head up in the propwash of the boat; the idea is you drop a small deadbait in front of its nose and hang on while it heads for the horizon! 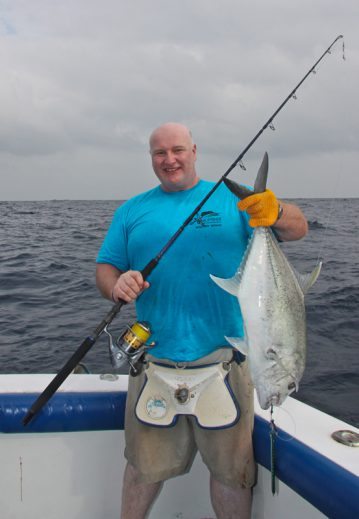 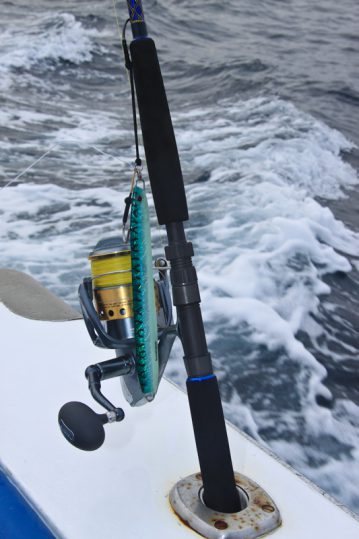 An early design flaws became apparent after an abortive pitch at a sailfish. I was quickly winding the bait back when the small baitfish skipped off a wave and the resulting slack line wrapped around the blank becoming trapped by the small keeper ring above the fore-grip. This came as a shock. If I had been playing a marlin or sailfish which had ran towards me this could have resulted in a broken line and a lost fish, and I stopped using the rod for this particular purpose as I felt there was a risk there. I was sorely tempted to snip the keeper ring off and would have if it hadn’t been an expensive test rod.

Angus, our skipper, took us to the ‘Karambesi spot’- Karambesi is the Swahili name for Giant Trevally. GTs are probably the ultimate jigging fish, growing in this part of Kenya to over 100lb and on this mark average 20-25kg, they were a sure-fire way to test any item of tackle as heavy drags are the only way to tame these powerhouse brutes. 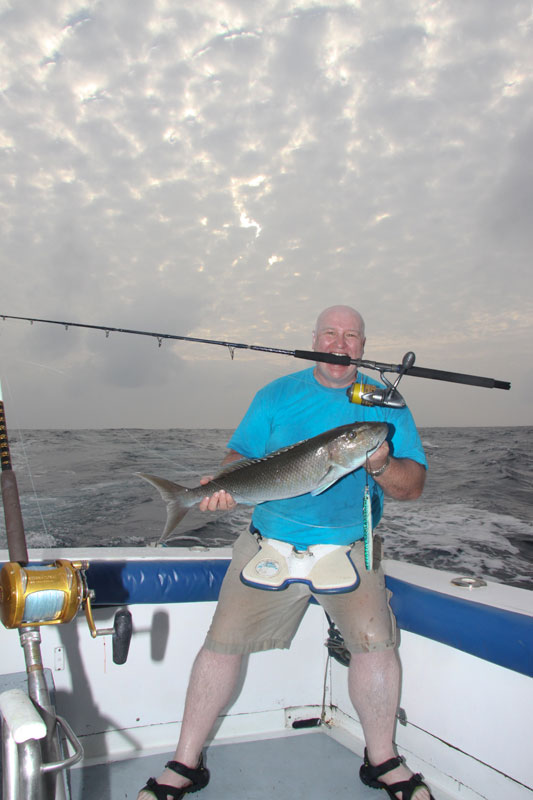 We started fishing in 250 feet of water using 300g jigs. Although it was just 7am we were soon sweating buckets working the lures hard and fast. The JIG TREK rod I was using felt light as a feather, but I was niggled by a small ‘comfort’ problem. Holding the rod to work the jig fast meant I had to grip it at the reel seat, and instead of a comfortable grip on duplon or a plain seat my fingers were rubbing against the hard plastic connection screw at the joint. This quickly became very uncomfortable and I was forced to alter my hand position. Moving my hand up to the duplon affected my jigging speed, and felt an unnatural way to work the rod. However, I should point out here that this is a personal thing symptomatic of how I hold the rod. Others will grip and w
ork the rod differently and have no issue.

The fishing was poor, possibly due to the very high tides, but I eventually hooked a fish. Not huge, but it felt reasonable. It dived a couple of times and the rod took it well enough but it was only a rather timid 6kg ‘green jobfish’, not the hoped for mighty karambesi. I looked over to Tony who had hooked a bigger fish and got a proper look at the action of the XT version. The usual steps in the action from the series of spigots were evident but otherwise blank clean, if not overly extended under weight of what was run-of-the-mill snapper of around 12kg. Tony loved the way the rod felt and handled.

Next drift I connected with a slightly better fish on the JIG TREK. It was a GT but not one of the real giants. At 9kg, it fought like a train nonetheless, but the rod easily ironed out all the rip-roaring downward running resistance served up. The rod isn’t some lifeless crane or indeed an overly flexible, soggy thing like some of the short jigging rods that do the rounds and aren’t appropriate for this application. I have absolutely no doubt the JIG TREK possesses the meat and necessary malice to tame much, much bigger fish, and would describe both rods as gutsy but responsive. 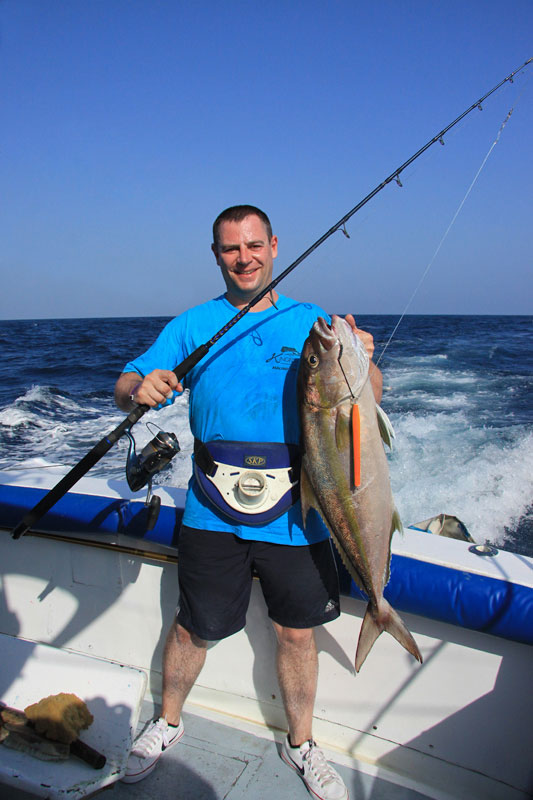 Tony hooked a much bigger GT at the same time as I hooked mine but he went far too easy on the fish and it bored straight into the reef and broke him. During this session we again both suffered with the line wrapping and trapping on the keeper ring. Avoiding this meant slowing to a more deliberate pump-and-wind action on the lure instead of the frantic 100mph jig-wind-jig-wind as fast as you possible technique. That ring was definitely getting the wire-cutter treatment!

The fishing wasn’t great on the day and while we were doing this all boats around us were catching sailfish. The crew set us up for trolling and I took time out to run a critical eye over the rods, and discuss their merits with skipper Angus. He has huge experience with speed jigging and judged both rods excellent in the main but voiced a preference for solid metal reel seats as he has witnessed plastic reels seats failing in the past when wrestling very large GTs and amberjacks in particular.

Later, Angus passed over his favourite amberjack spot. Some 550 feet deep, we used 500g jigs, which is excruciating work let me tell you. Tony hooked and landed an 8kg AJ without incident which turned out to be the biggest fish from the mark. However, a 45kg amberjack was taken from this mark a week later… that would have provided a far sterner test of the rods.

The usual problem people associate with multi section travel rod is that every joint must be a weakness, this was probably true a few years ago but this is the 21st century and the raw materials and engineering knowhow now are incredible. I have a friend who builds 6 section salmon fly rods from flat pieces of carbon cloth, some of them costing almost £1,000. He sells many of these rods a year and his failure rates are negligible because of the quality of his stock materials. I believe the quality of the carbon in the JIG TREK rods is possibly as good.

What would I change? The keeper ring has to go, and indeed it has been chopped on the rods that I was given. I’d also have solid metal reel fittings as Angus suggests, and, for reasons of sheer comfort, have it installed so that it screws up from the bottom. That way you are not going to suffer blisters or be relieved of lumps of skin and flesh due to the fitting chewing into your hand even if a jigging glove is worn.

The lighter JIG TREK rod would be superb for fishing in Norway or Iceland, more than able to cope with almost any sized cod, coalfish etc. It also has the grunt for a moderate sized halibut. And it is my intention to take the rods out to Norway in the near future. Both the JIG TREK and the JIG TREK XT stand up as excellent rods for UK waters for wreck fishing, deep water, heavy lead and big fish applications for the likes of conger and large blonde rays with a multiplier.