Weather worries put to rest Steve “Madpolka” Parker heads out from Weymouth aboard Supanova II for what turned out to be a cod catching day of a lifetime.

After my ‘eulogising’ about the merits of fishing in warmer climes I think today the UK fishing gods felt I needed a little reminder of just how good the fishing is in our waters and dealt me what can only be described as the best wrecking I have ever experienced.

I had thought on Friday that the trip may be at risk and that if we did go it was going to be a fairly uncomfortable day at best. However a text from the skipper of Supanova II, Lyle Stantiford, confirmed that the trip was on and there were serious numbers of cod on the grounds. He had sailed back from the Channel Islands the day before and stopped with his party at some wrecks on the way and they had bagged up. He advised that type of lure was irrelevant – they would take anything and they had even landed fish on ‘Tesco Carrier Bag’ tied to a hook and fished flying collar style the day before. I packed my bag and after careful consideration decided I would stick to what I knew best and left the exotic jigging gear at home.

When I arrived at the boat in the morning the weather felt better than the forecasters had promised and at least the drizzle had gone away. I set my 6lb Kenzaki up with a flying collar rig and to my 12lb Kenzaki I attached an octopus type 7oz pirk which I thought I might bait with a Calamari and have a crack at the ling during the slack water. We headed out past the Bill and as we made our way over the shallower grounds to the deeper water the sea was really snotty. As crossed into the deeps however the sea smoothed out to a long rolling swell which dropped all day as the sun asserted itself and created a perfect May day – way better than the forecast. 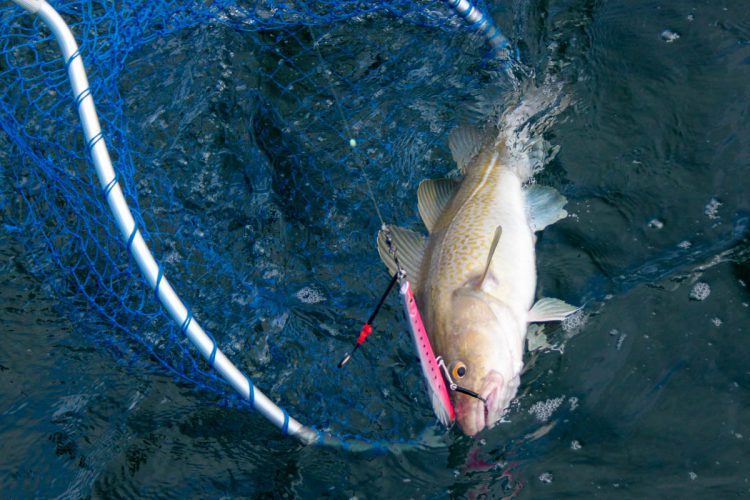 On the way out Lyle set our expectation that the massive majority of fish were in the 4lb to 6lb pan size range but they had picked up a couple of doubles including an 18lb’er the day before. He also said there were reports of a fish of one ounce over 30lbs coming to a Weymouth boat on the same day. Although he was trying to instil some realism in us I suspect, like me, everyone in ear shot heard “fish of 18lbs with a chance of a 30lb’er” and started dreaming!

I kicked off with my lighter outfit and armed the business end with a bubble gum pink Evo Redgill. As we started our first drift we looked like dominoes all down one side of the boat with each rod going over in succession from stern to my bow position. A couple were dropped but most of us put a cod on the deck and Lyle was now the busiest man on the boat. All the fish were in the anticipated 4 to 6lb range. Next drift and the back of the boat scored while in the bow we blanked. Then it went quiet as the water went very slack. Lyle decided to conduct a test and grabbed a speed jig, the very ones I had chosen to leave at home, and promptly banged out two fish on one drift. Those who had them switched and were straight back in to the fish. 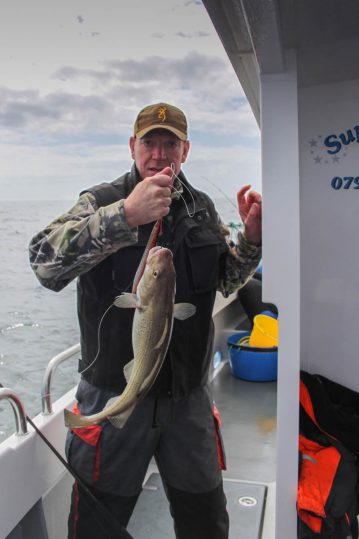 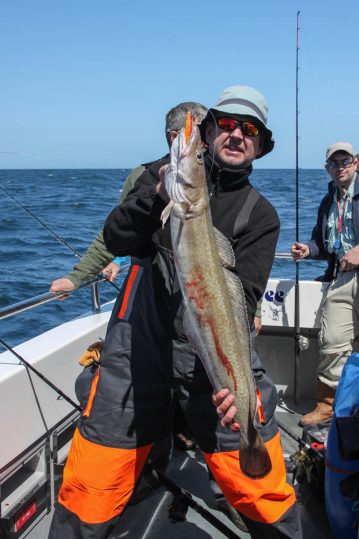 I decided to try my Octopus pirk to see if this would work in the slack water. The result was predictable – I hooked the wreck and £5.99 was donated to the sea. I switched back to the light gear and with the tide now picking up I managed another pan sized cod and was a bit relieved that I was back on the scoreboard as it was looking a bit ominous for a minute or two. As the tide really picked up the fish seemed to stop feeding at the current wreck and Lyle decided on a move to a much bigger wreck about a mile away. How do skippers know that a move of a mile will make the difference? I have no idea but Lyle obviously does, as what we had just experienced wasn’t even the starter – more like a canapé.

I had another pan sized codling and the rest of the boat was getting busy – the average stamp of fish had clearly increased as well with fish nudging double figures showing. I then did what I do best and stuck two or three sets of gear in a row in to the wreck. A retied leader and a new boom and I was ready to go again. By now I was using a small solid blue and white four inch shad as I had received a number of plucks without hooking a fish on larger lures. The result was another modest codling and I decided I had found the formula. As I took my fish to the fish box I was surprised at how full it was and how many better fish than mine there were – surely it was my turn for a double?

Next drift and I lowered away again. A few retrieves and the skipper was calling out that the we were ‘just coming on to it’. Back to the seabed I went, three turns and I was solid to the wreck – again. I dropped straight back to see if I could dislodge it. Three more winds and solid still. Then the wreck moved. I took another turn of the handle and this time the wreck shook its head – violently. Then the wreck began to run. My heart was thumping as it ran, then stopped, then ran, then shook its head and all the time I could do nothing but watch. Then it seemed as though the line was just coming off the reel steadily as though I was hooked in the wreck and fighting the drift but there were enough head shakes to reassure me this was definitely a fish – and a heavy one. I looked at my 6lb Kenzaki and suddenly wondered whether my sporting approach to this pastime was actually just foolhardiness. I thought through my tackle end to end and remembered that although I normally fish 20lb braid on this outfit I still had the 30lb line I had put on the reel for my holidays. I remembered that when my leader had gone I replaced the somewhat delicate fluorocarbon with some sturdy 30lb Penn International mono. I had a 50lb ‘Slinky’ trace. I may not be able to muscle the fish with the rod but the gear was certainly strong enough to wait him out – as long as I didn’t get tired first and the hook hold was OK. 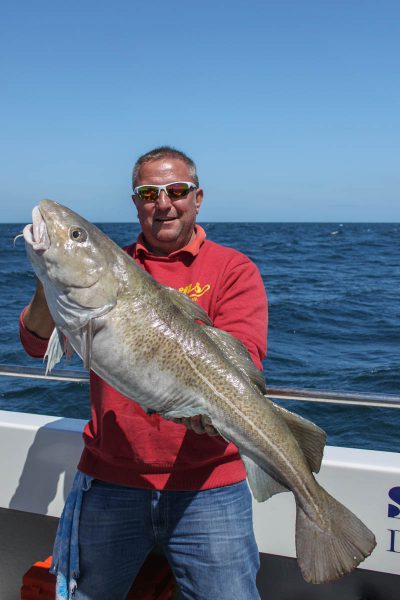 The fish had at last stopped running now and I started to try and pump some line back but for every pump I made the drag gave the fish an equal amount back. With all the other fish from that drift now on the deck and us well past the wreck I suddenly thought of my fellow crew members and I needed to get this fish in soon as it was using up other peoples fishing time. “Take it steady” came the advice from the skipper, “that’s a good fish”. I huffed and puffed and tried not to laugh at the wise cracks and lose my concentration. I was now making ground but the fish was hanging in the tide and still taking line from time to time. I started to wonder whether I had just been over cautious with my drag and this would turn out to be a 12lb fish being played out on 1lb of drag. I considered pushing the wheel forwards a couple of clicks but then I imagined every skipper I have ever fished with shouting in unison “don’t you dare touch that @*£!ing drag!” and thought better of it. As the fish tired and came up in the water the line was adopting an ever shallower angle and the skipper advised this could be a very nice fish due to the way it was riding the tide. Then we saw colour and the skipper shouted “it’s a pig!”. People were moved away and it became very serious for a moment then the gaff flashed and the biggest cod I have ever seen in the flesh hit the deck with a resounding thump – easily my personal best, just a question of by how much. I took the next drift off so we could get pictures and so the skipper could weigh the fish for me, 26½lbs – a new personal best by over 10lbs.

Next drift and I was in again. This was not another monster but I also knew the way the fish was running that this was a proper cod. A nice estimated 14lb cod which any other day I would have weighed and photographed. Lots of wise cracks now I had two doubles in a row. As the day wore on I bagged another couple of codling and lost a couple of lures causing my trace to get ever shorter. I re-armed with a pink Redgill Pilchard which has a superb tail action. 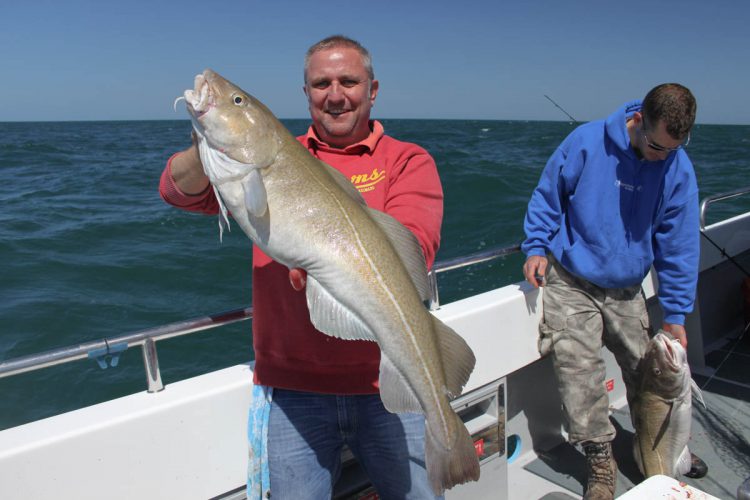 I lowered away hoping that my larger lure might attract a larger fish and again felt a number of plucks but no hook ups. Small fish I guessed. We went round again and this time no plucks but a slamming hit and a fast running fish. This was definitely another double and I suspected was second only to my earlier monster. I landed it much more easily that the big’un so was surprised when it surfaced just how big it was. 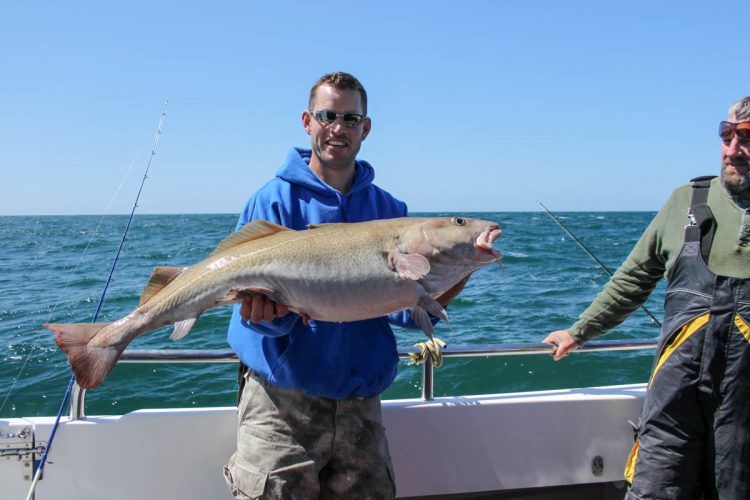 I was now swaggering across the deck with another nice fish when I heard a commotion behind me and a thud that I somehow knew was a fish that was going to surpass my achievement. An angler, named Andy, had a monster on the deck and I eagerly anticipated the weigh in. My latest capture tipped the scales at 22lbs – now I had two ‘twenties’ in a day! Andy’s went on the scales and the skipper concentrated very hard – 29lbs. I had held the boat record for no more than 60 minutes. A stonking fish and a worthy winner. 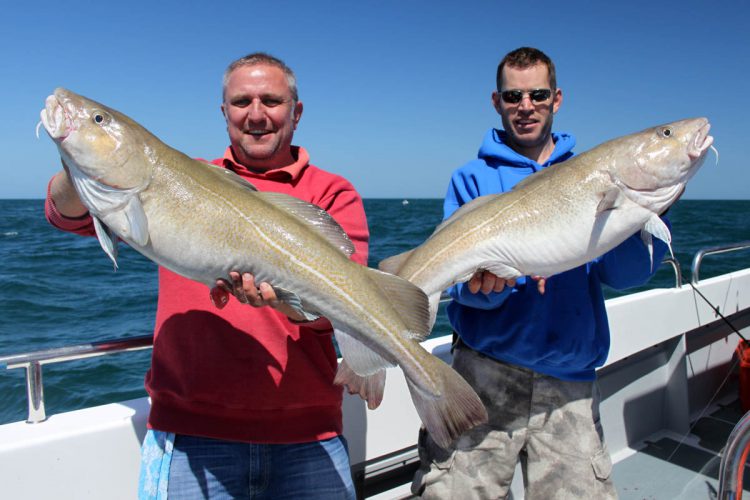 So that was that. I did go on to snag a couple more codling and a double figure ling but this was frankly incidental. My best day’s wreck fishing in 38 years by a mile. This year is shaping up to be a very good one indeed!