Tribute to a legend

The recent sudden passing of legendary Culdaff charter skipper Des Mills has shocked the world of sea angling. In tribute and farewell, Steve Souter recalls his last outing with the great man.

John O’ Kelly, a dear old fishing friend, loved Culdaff and told tall tales of fish so thick in number that you could at times skip clean across their backs. John was a well-travelled angler and despite having shared fishing days with some of hottest UK skipper tickets, he rated Culdaff man Des Mills above all others. I smiled and thought of John as I stepped aboard Barracuda and shook Des’s hand. 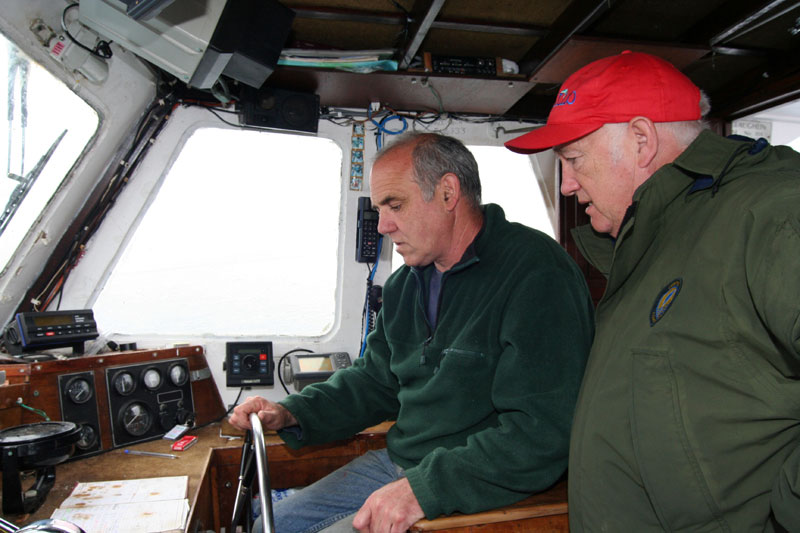 There are literally hundreds of sunken ships lying off Culdaff, northern Co Donegal. These mainly wartime casualties are so stuffed with pollack that the challenge lies in getting through to the cod, ling and conger below. I’d been over in Ireland for a week; windy and pernicious weather had been a monkey on my back for most of the time. Today had looked no different but a half-day settled window unexpectedly afforded us the opportunity to push offshore and drift some of the local wrecks.

Dozens upon dozens of large wrecks litter the seabed off this rugged coast; most of which have never known a fishing rod. The one thing that they all seem to have in common is they absolutely teem with hungry fish, and an attractive bonus is that many are within an easy 45 minutes sailing from port.

I joined a great bunch of Donegal anglers made up of Northern Regional Fisheries Board officers John Hederman, Jim Barron, Michael Patton, Hugh-John Patton, and their manager Harry Lloyd, along with my travelling partner Norman Dunlop. All of these guys had bundles of previous experience of the Culdaff fishing and sang the praises of canny skipper Des. 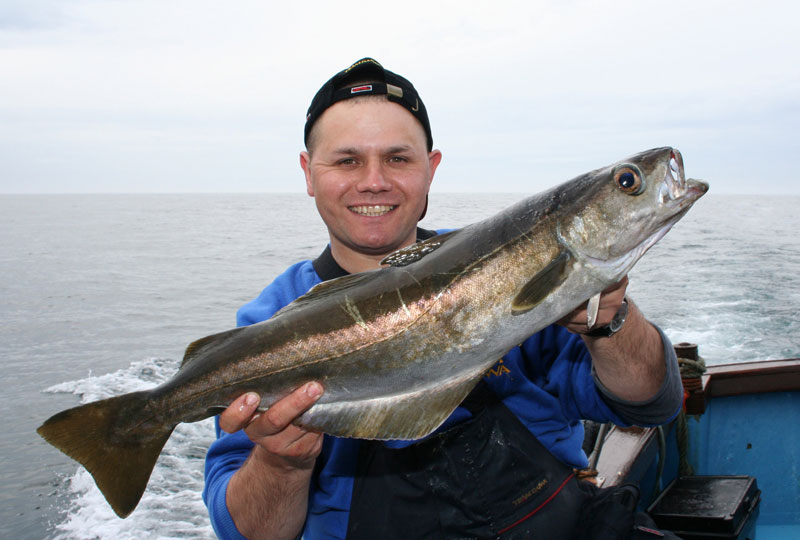 The first wreck visited was the substantial ‘Carthaginian‘ which lies some five miles north of Malin Head. A 4450 ton freighter which hit a mine and sank during WW1, the location of this wreck was only recently discovered. Already it had given up teen-weight pollack, coalfish to double figures, fat cod and ling in excess of 20 lbs. 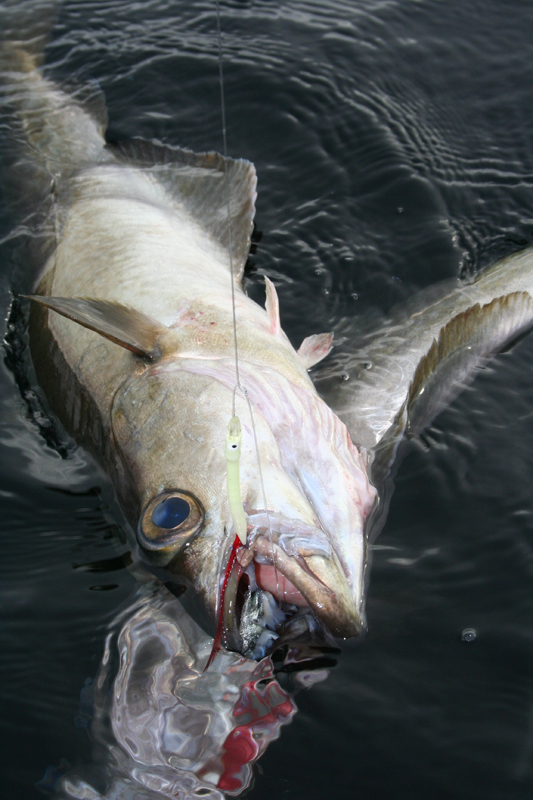 On arrival, the sounder betrayed masses of fish swarming all over the wreck. Our efforts with Red Gills, jellyworms and pirks found endless pollack and coalfish to around 7 lb. There were thousands of them down there, and intense competition for food saw these run-of-the-mill size fish quickest out the blocks on every occasion. Fish baits were likewise foiled by large pouting and specimen-sized cuckoo wrasse. The large cod and ling that Des has successfully tapped before proved unreachable with so many other fish present and in feeding mood.

Des’s answer was to shift to another wreck with a better ling track record. The far smaller 7,800 ton ‘Athens’ lay six miles further north under 55 metres of water. Like numerous ghost ships of these waters, she was lost to a German U-boat in 1917.

Athens has a reputation for ling, which at times can be caught two and three at time on multi-hook rigs. Fresh mackerel is the key however, and they had proven hard to find in recent days with rough seas serving to scatter the shoals. In the last few years this relatively small but very well populated wreck has also turned up numerous specimen pollack and coalfish to 12 lb, cod and good torsk…but not today.

We couldn’t give much time over to feathering bait with blowy weather hot on our heels. A brief bait interlude brought only small coalfish to our various feathers. Improvising, Jim and John baited up with coalfish flappers and cutlets which took surprising numbers of ling before my goggle eyes, but nothing bigger than 8 lbs. Those sticking to lures were again rewarded with pollack and coalfish galore.

It is a hard fact of wreck fishing life that on new wrecks that teem with fish life it is unusual to take really big specimens with any regularity. This is not because they are not present, but because they are vastly outnumbered by a ratio of several hundreds to one by more modest fish. Much as it ails me to suggest it, I am sure that some really big fish would come through if this suffocating blanket of smaller fish were thinned somewhat.

Des pointed out that porbeagle sharks often worked this and other wrecks in the area, particularly in the warmer summer months. Most anglers are not geared up for shark and bite-offs are a regular summer occurrence. Des’s only successful shark capture thus far was a small porbeagle of 85lb, but much bigger fish have certainly been seen and briefly encountered. More time is to be given to serious sharking when the new boat is up and running. 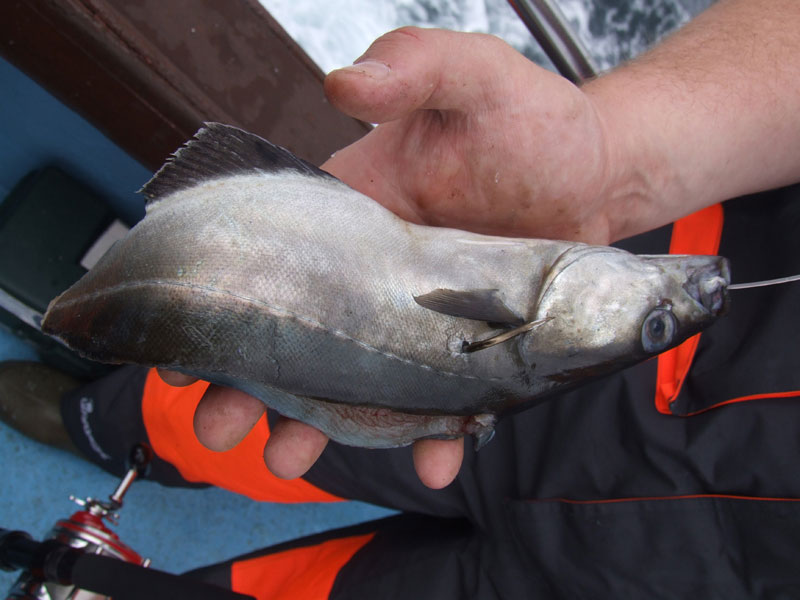 Des told me that most of the wreck fishing in this area is done on the drift, but the potential for huge conger at anchor is not lost on him. He has firm plans to target eels aboard the new boat. I don’t think it will be long before Des cracks this nut and big angry snakes are being wrestled over the gunnels. 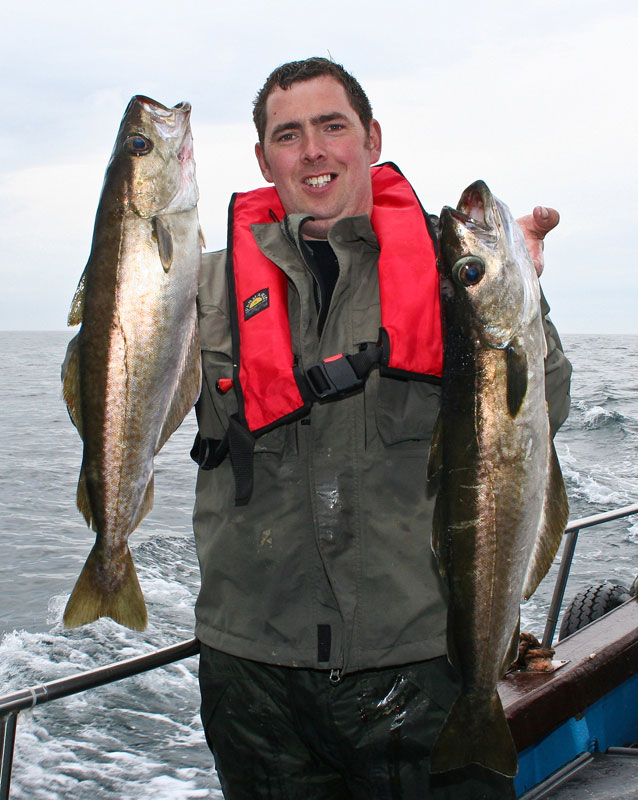 With the wind building, our third and final wreck, the ‘SS Cumberland’, lying six miles north of Inistrahull Island, was fished only briefly on the way back to port. Yet another World War 2 casualty this one, it proved more of the same with an endless stream of middleweight pollack latching on to each and every hook dropped down.

With the weather now visibly closing in Des chose to turn-tail for home. We had certainly encountered huge numbers of pollack but that was only a scratch on the surface of what Culdaff has to offer as a cabin full of lunking fish pictures will testify. Had weather and time been on our side, we could have fished for big blonde rays, turbot, plaice, and gurnard over the sand and banks of mixed ground. In truth this was the fishing that I really wanted to get my teeth into but the weather gods had other plans.

John O’ Kelly’s words rang once again in my ears as I stepped back on to Bunagee pier at the end of the day. On those wrecks it did indeed feel like you could dance across the backs of a solid wall of fish. But for all their numbers, diversity of species was denied me at this time of asking. Looking out across the beautiful bay, I promised I’d be back. Fate has now conspired to deal many more than I a dirty hand, but I will be back and I’ll be sure to raise a dark glass to memories of John O’ Kelly and Des Mills.

Culdaff is a little over 160 kilometres from Belfast a comfortable two hours drive from the ferry terminals at Larne or Belfast. I travelled hassle-free with P & O Irish Sea from Troon to Larne and was on Irish soil in half the time it takes me to get from Scotland’s central belt to Thurso on the north coast.

I stayed at the famous McGrory’s Guesthouse in Culdaff village and would thoroughly recommend it to anyone who enjoys everything that great Irish hostelries are famous for: that being a fantastic atmosphere, spotless, spacious accommodation, great food and even better Guinness. 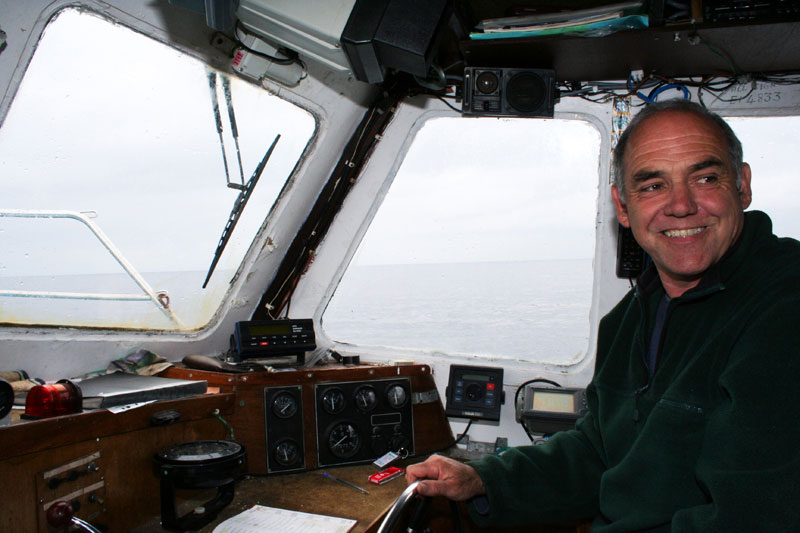 Further boat and shore fishing information can be accessed from the Central Fisheries Board website.