Just returned from an excellent break, with three of the six weeks being spent with Paul Whittall in Phuket, Thailand. No great numbers of fish but lots of species, see Paul’s blog for full details of the trip – www.paulsthaihouse.co.uk 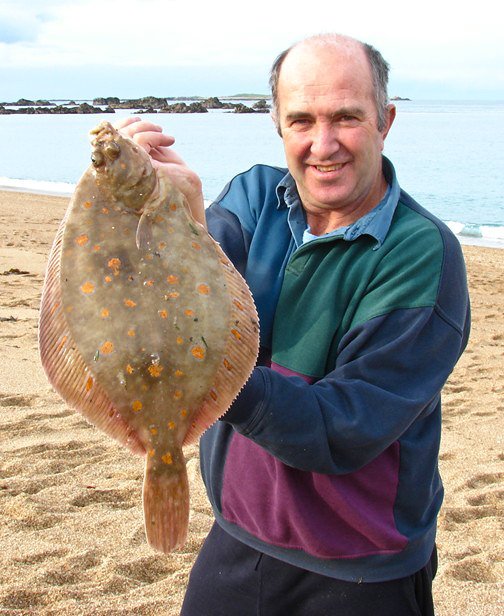 Closer to home it hasn’t been the best, but this is only to be expected at this time of year with the spawning season and reduced angler effort being reflected in the catches. On our return Dick Smith, who is without question the most knowledgeable guy on the island locally, had a terrific shore session on the bass. Using worms that were a week old and needed using, he managed 15 bass to 3lb 8oz. He told me that he never had a cast whereby within 30 seconds he never had a bite. Three nights later he returned on a smaller tide with just a few worms and a tub of Gulp! Oh yes, the infamous plastic bait that says on the packet it ‘Outfishes Live Bait’. Would it outfish Dicky’s dead worms! The result was a straightforward split between bait and Gulp, 50/50 and due to the durability of the Gulp he only used 2 worms. He finished the session on 12 fish with the best falling short of 2lb 8oz. Other shore sessions have included plaice, with Nigel Bowditch managing half a dozen in daylight sessions to 2lb 4oz. This time last year we saw a couple of fish over 4lb so they might be on the cards. Still plenty of black bream about but they are smaller now, also soon they will return back up the Channel to start their spawning rituals.

Night time has been poor with just bull huss giving any sort of activity. Again it is Nigel finding the fish with his best session of two Huss both being double figures, 11lb 4oz the biggest. We seemed to have seen a resurgence in the numbers bull huss around the island in the last 12/14 months, let’s hope that continues. Conger eels have been targeted but things are very quiet on that front. Going back to daylight species mackerel and garfish have been reported from the Breakwater and the other Channel islands have reported the same, very strange given the water temperature at the moment. At this time of year we normally we have rafts of mullet floating around that have arrived from the UK but they are absent other than resident fish to 4lb/5lb.

In the boats we can look forward to the arrival of the turbot on the banks. I’ll stick my neck out and say it will be better than last year, I base this on the water temperatures being somewhere near normal as opposed to the previous two years water temperatures remaining high, I’m no scientist though. I had read of some hearsay reports that they are showing but I have no definite first hand reports. Wrecking is good with pollack to 20lb and the odd ling showing. Tope fishing should be on song too for the first arrivals of the visiting charter fleet from the UK. Commercials have been catching plenty of bass so I guess if you stuck a rod and line in you should see a few.

Next month we will have a report from Colin Dukes as he starts the new season off in his new boat, Smuggler of Braye, a 33’ Lochin. Colin has always run his business from Exmouth and this year he is looking to relocate that business to Alderney as his base. This makes it easier for the angler that doesn’t want a full on fishing holiday but would prefer to have a couple of days afloat and spend some time on the island. For some anglers too the prospect of flying to the island can be far better than crossing the Channel in a boat. The price of the boat is cheaper than most as you have got less steaming to do, pitched at £450 a day it’s good value given most fishing is on the drift. Colin’s details are on www.deepsea.co.uk or ring 01626 890852.

The end of March sees the annual Jersey v Alderney specimen match. Target species are conger eel and thick lipped mullet with everything else, although not ignored, playing second fiddle. Jersey have some 15 or so anglers coming to us and very often have more fishing than Alderney do! Report on the results next month, lets hope we have the same calm weather as we are getting now to keep everyone out the pub!

Looking further ahead to the annual Alderney Angling Festival start to get your flights and accommodation booked. There seems to be a lot more activity going on than at this time last year so to be sure of your place by getting it booked. If you want to bring your car over, you can pack the car out with all your gear too, then get in touch with Alderney Shipping to see what deals they have. Contact Alison on 01481 824484. Dates of the week long event are 17th to 24th October. For further details contact myself.

Tribute to a legend