Steve Souter reveals the bream fishing out of Littlehampton is very much alive and well.

Back in the day, the port of Littlehampton was widely regarded as the very seat of English bream fishing. The 60s and 70s were unmistakably boom decades when famous marks like Waldrens, Kingmere, Black Ledge, East Ditch and West Ditch, were so synonymous with black bream that it was difficult not to mention them and the specie in the same sentence. To call the venue prolific doesn’t begin to tell the story of a period when gluttonous 100 lb bags of spiky bream were expected, and wouldn’t draw a second glance among regular dabblers. Legendary Littlehampton charter skippers like Dutton Etherington on Mark Twain, did much to put the place on the fishing map. Year in, year out, droves of eager anglers came from far and wide to the mouth of the river Arun and this quiet corner of the south coast with only black bream in their sights. Alas, such fish numbers couldn’t fail to draw other attention, and the bonanza that boat anglers had decadently taken for granted, hit a brick wall on the back of heavy 80s commercial pressure, which would detrimentally impact on the area’s bream perhaps forever. 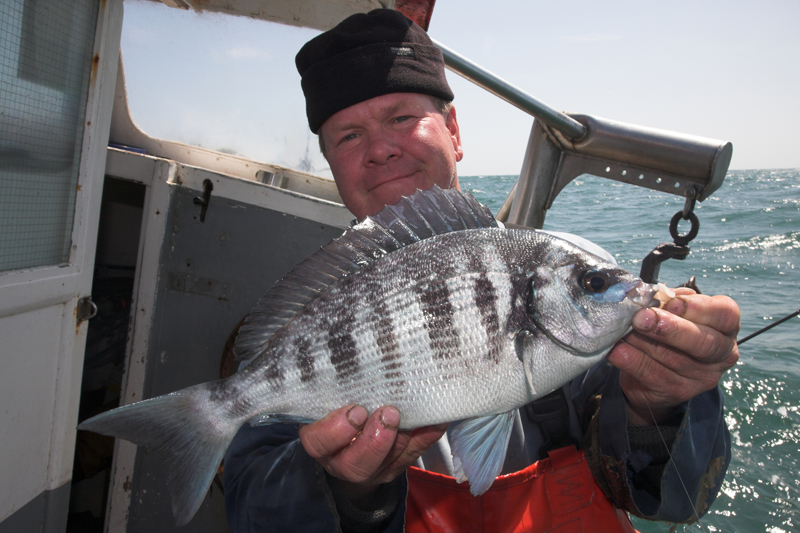 Relentless pair trawling effectively annihilated the chalk bottom habitats beloved of the bream. Indulgent anglers were not blameless either, regularly taking much more than their share; thus also contributing to the bream’s previously unthinkable demise. So many bream were removed that the population teetered on the brink of collapse and commercial interest inevitably waned, while anglers were not inclined to chase shadows either. As a result the 80s and early 90s were forgettable, and despite there being much more to this port than bream fishing, Littlehampton became the forgotten venue. When the bream disappeared, travelling anglers went elsewhere. Local rods however never abandoned the venue, and hope of a resurgence increased in the mid 90s when the bream began to make a reappearance. Fear that this upturn might prove short-lived, and even bigger fears of pricking commercial ears meant those with a finger on the pulse didn’t openly broadcast. A dozen years or so on from then, the state of the Littlehampton bream fishery doesn’t come close to what it was, but it can definitely be described as healthy.

The force 4 southerly that rattled the rafters overnight had blown itself out as we sat polishing off a bacon sandwiches and mugs of tea at 7am in the cafe overlooking the pontoon. I had joined Littlehampton anglers Chris Pucher and Andy Wells and a bunch of travelling Scots who had made the journey south specifically to scratch a bream itch… well that and to drink lots of beer apparently! 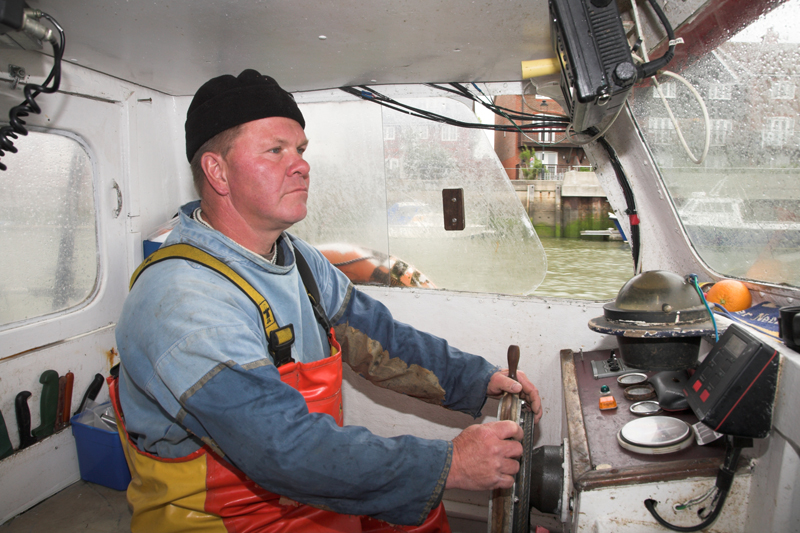 Skipper Dickie Leggett is another old friend and a member of that elite group of skippers who are also top anglers in their own right. Dick’s competitive credentials include winning the EFSA English Boat Championship. His boat Lynander, a chunky 30 ft Versatility, could never be described as plush or fast, but she’s roomy, uncluttered and a fine fishing craft with a proud reputation for success. A bit of residual swell meant the ride was bumpy going over the bar at the river entrance, otherwise the 35 minute trip out to West Ditch was gentle on those with fragile heads from the night before. With Lynander settled on the anchor, Dickie demonstrated how to prepare a perfect bait.

The undisputed king of bream baits is squid, but Dickie is quick to point out that long thin strips of cuttle and meaty mackerel chunks can also be deadly. How the squid is cut and presented is crucial: it should not be skinned or cleaned, and the only bit that should be discarded is the hard internal skeleton. A single medium sized squid prepared correctly will provide two generous baits. A calamari is laid flat and sliced along the full length of the mantle removing a narrow cut from the side. This slim cutlet is then sliced down the middle to produce two long strips which are threaded up the shank of the hook. The squid head and attached innards are removed from the mantle and the skeleton tossed. Hook the head between the eyes leaving all the gut and snot to dangle enticingly… this is the bit that especially bigger bream find irresistible. The remaining part of the mantle is cut into strips to provide the means for a substantial second bait. 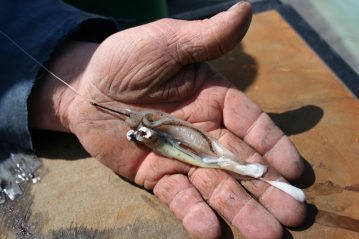 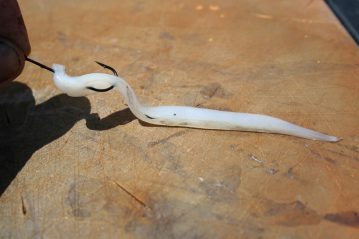 Dickie says: “Knowing how bream feed would help anglers hook more fish. Piranha-like feeders, a bream, or several bream together will ferociously rip away at a bait, paring it down dangerously close to the hook carried in it. For this reason it is essential not to strike bites early. Typical bream bites will ravish the rod tip like a pneumatic drill, but it is important to give them time to find the hook.” With everyone else on squid, Gordon Lyall opted to start with worm baits to see if he could winkle out some species variety. His reward was unspectacular in the shape of pouts, ballan, goldsinny, and several cuckoo wrasse. Bream were slow to show at the first stop, with only a couple of small ones for Chris Pucher among the pout in the first half an hour. With sport slack, Dickie gave the shout to wind in, hauled anchor and moved to a small patch of rocky ground close to East Ditch.

The first of the flood tide on the new mark brought instant results, with bream all around the boat within minutes. Dickie, fishing from the cabin door, led the way with several cracking fish nudging four pounds, but all enjoyed frantic action as dashing silver-blue dynamos towed lines this way and that, before tearing up the surface film in bombs of wet aggression. Bream fishing is one branch of sea angling were the fish cannot be relied upon to simply hook themselves. Bream do like a moving bait and have an uncanny habit of rushing in and attacking as the rod tip lowers and the bait flutters backwards. At this point it is important either to do nothing, or to drop the rod and slacken the line in order to ‘feed’ the interested bream the bait under minimal rod tip tension. 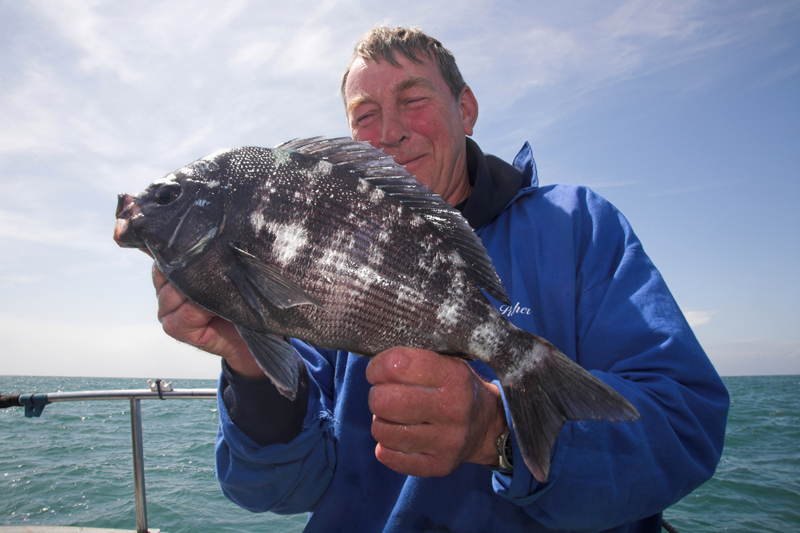 The inability to convert loads of positive bream bites into hooked fish is symptomatic of reacting too quickly. George Bell and Willie Lyall were enduring those frustrations so often suffered by rookie breamers, but Dickie was on hand with good advice which quickly saw them tuned into to the technique. Chris Pucher and Gordon Lyall made it look easy, banging out bream after hyperactive bream. Chris has decades of Littlehampton breaming under his belt, and has experienced both the highs and lows. Like Dickie, he well remembers the non-stop bream action of the old days and how easy it was to fill the boat with fish if you were of a mind. Equally, he can recall the ‘dead’ years and the part that he and others perhaps played in bringing them about. To that end, the vast majority of Chris’s bream are returned alive and kicking. Many anglers would have you believe that the front of the boat is no good for bream fishing, and that on or near the stern is the only place to be.

Dickie made a mockery of this thinking by catching loads of good bream from right outside the cabin door. His method is one well known to boat match anglers, and involves casting the bait downtide into the ‘fast lane’ generated big scent-heavy baits and regular free slings of chopped mackerel and squid. I’d regularly look up from fiddling with the camera to find a chuckling Dickie and Chris ‘thunder-brows’ Pucher simultaneously locked into decent bream. Their very light rod tips clearly amplifying the raw power of tethered fish; line sawing aggressively left and right as flashing flanks rushed in and out of shot not far below the surface. Neither would bother with the net… it didn’t matter if fish fell off because there were plenty down there. 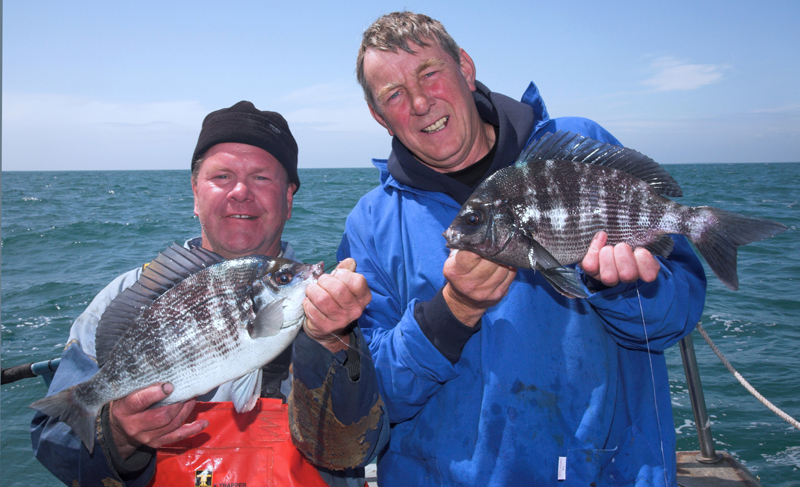 A final move to the back of Kingmere – the most well known Littlehampton bream mark of them all – saw Andy Wells who had spent most of the day honking loudly over the side much to everyone’s callous amusement, suddenly come alive. Andy notched a flurry of good bream, capping these with the only smoothhound on the day: a fish of around 7 lb taken on crab. Other fish caught included small tope, conger, pollack and inevitable dogfish.

Dick preaches a big hook and even bigger baits for big slab-sided bream.

He makes clear: “Match bagging tactics, lovingly prepared dainty little baits and multiple hook rigs are all very good for matchbox bream and skinny skimmers, but for proper bream you want to fish one strong 1/0 hook and a proper face-full of bait.”

Normal fishing depths off Littlehampton are 30 – 50 feet of water. Dick’s core tackle is a medium sized fixed spool reel loaded with 20 lb braid and the new Daiwa Saltist Alltider fitted with the lightest tip. The fishing is over rocks, and you do lose gear. Dick doesn’t use a stand-off boom in the rig. Instead, he runs a simple snap swivel on the leader for the lead, which traps against a buffer bead and a second link swivel tied to the end. The trace itself is 5ft of 15 – 20 lb clear mono trace to a 1/0 Kamasan B940S hook. He isn’t big on attractors but does like to fix a single 10mm yellow floating bead roughly 3 inches behind the bait to give it some ‘lift’ in the tide. 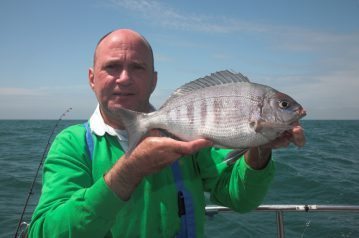 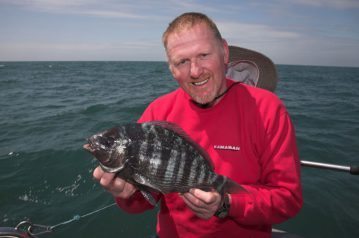 With the famous chalks irreparably flattened, Dickie told me that incoming bream now bypass the old grounds in favour of the alternative hard reef and boulder grounds. End of March to mid June is peak black bream season with the first four weeks of the season being the most prolific. The summer months of July and August see bream numbers dropping and average sizes decreasing. September brings a bream second wind, with fish shoaling up and feeding hard before moving out to deeper water at the end of the month. Dickie says that the best times for big bream are during that hectic first few weeks of the season, or during the September surge. A four pound bream is a good one for the area but five pounders turn up every year. Autumn breaming is again all about location and moving with the fish into deeper water, where it is still possible to catch bream on rough ground marks into January. 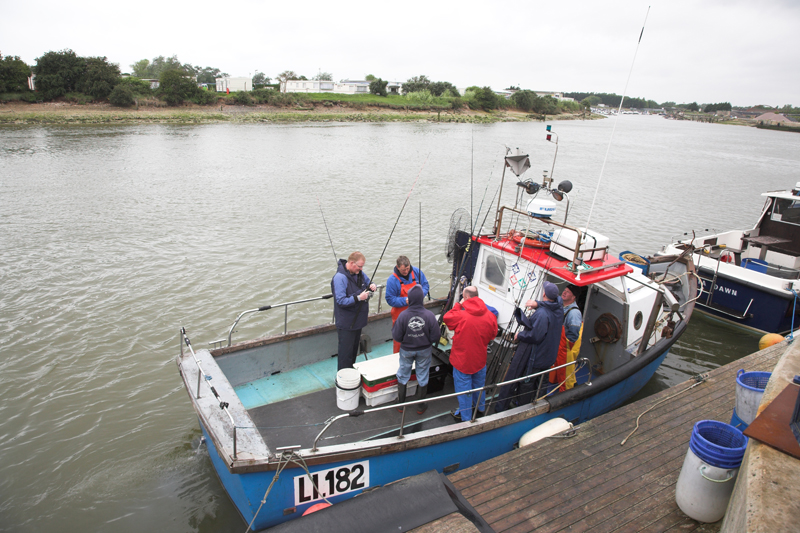