Backed by mountain and dense forest, the untamed shores of Loch Sunart could be described as fiordic in appearance. Remote but reliable for thornback rays, venues don’t come much wilder, or much better than this says Steve Souter.

There aren’t many fishing marks I know where you have to ford a river, be wary of legions of heavily antlered stags, and suffer the close scrutiny of horned highland cattle… but one immediately springs to mind. It nestles quietly on the southern shores of Loch Sunart, several miles down a hard-to-find and harder to negotiate dirt track, deep in the heart of proper four-by-four country. Getting there is an experience, and if you do manage to locate the place with your suspension intact then the thornback ray fishing can be quite superb all year round.

There’s no shortage of fantastic looking fishing spots all around this remote sea loch – some much more off-road than others – and a great many have probably never been fished. The mark of choice was only a two-minute hop from the car through some jaggy brush and greenery… and it’s a lazy angler’s dream. 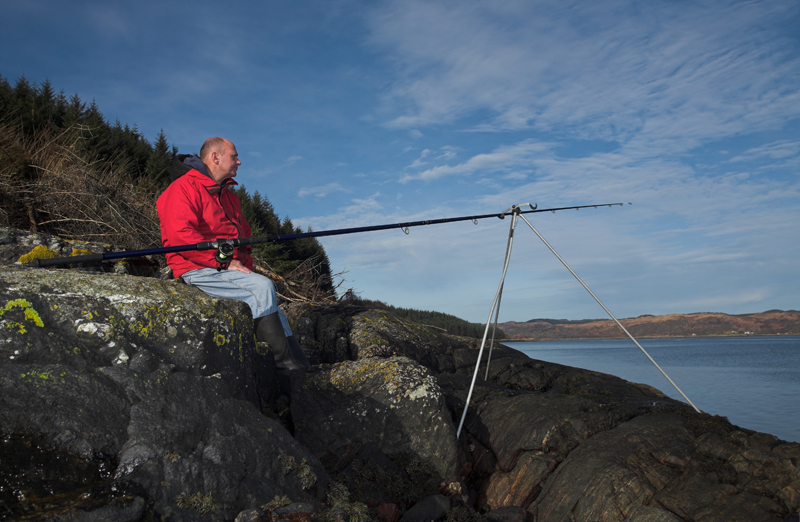 A high, fairly flat rock ledge backing hard against the drooping lip of the shore and its protruding tree branches, the location is not without its casting complications. This is an issue because the ability to cast a reasonable distance is important here. Baits plopped everyday distances of, say, 80 yards or so, find nothing like as many fish as those launched that bit further.

There’s space for three anglers on the main platform, and at low water, on all but the smallest tides, a second lower rock ledge offering better clearance for casting and landing fish is revealed. A salmon farm sits to the immediate left, while hill, glen and forest spectacularly dominate the wider panorama as far as eyes can see. Wild and isolated, this part of Sunart is about as divorced from mainstream civilisation as it is possible to get nowadays, with the one noticeable glitch. 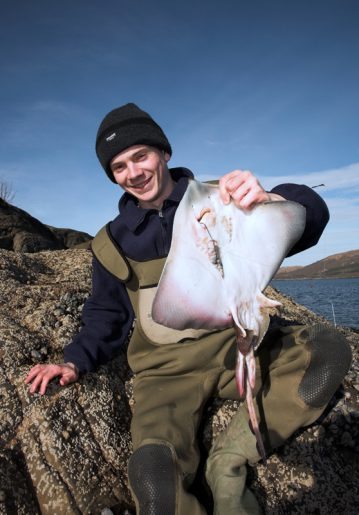 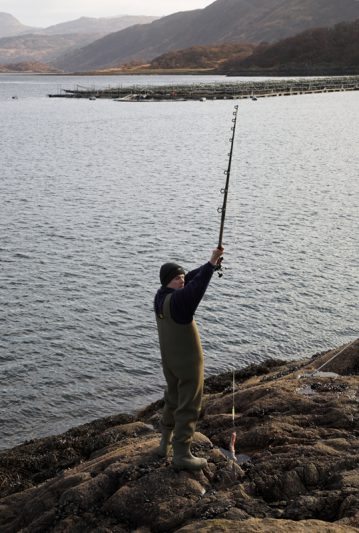 Is the salmon farm a contradictory blemish on the complexion of otherwise unspoilt surroundings? Well, some would argue that the farm’s close proximity has much to do with the fishing being as good as it is. How so? The answer is that much of the nutrient fish food lumped into the salmon pens drops straight through; this is like large scale ground-baiting which must serve to concentrate fish in this area. The tide off the front of the mark isn’t too fierce, and the chances are that any loose food offerings are not washed much beyond the immediate area before being intercepted by queuing resident fish. Well that’s the theory at least.

My knowledge of this spot is not extensive, but the limited time served has revealed perhaps something of a pattern. Talking in terms of rays, my own experience here points to small tides being okay but less prolific than springs, with the flood tide having more to offer than the ebb. 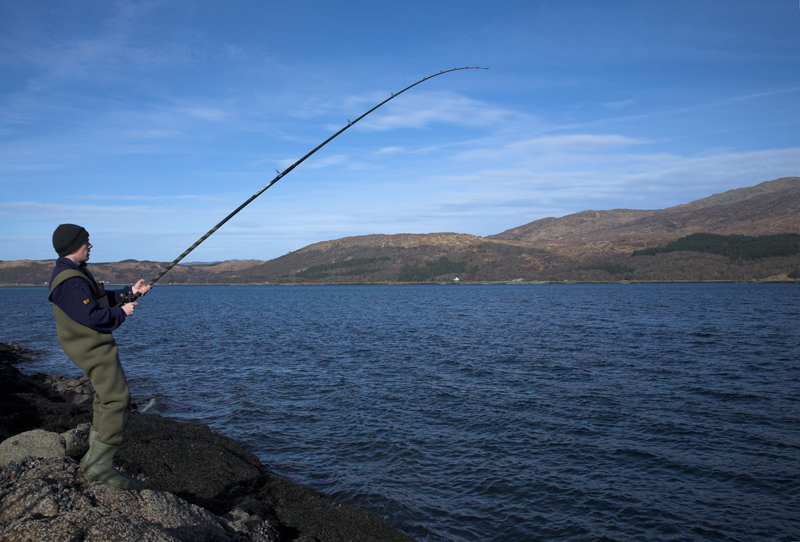 As shore marks along the more northerly sea lochs go, this one is shallow. I would hazard general casting is into less than 40 feet, but longer casts find a trough of slightly deeper water. Thornbacks and odd dogfish aside, gurnard, coalfish, whiting and small codling put in appearances. Until recently, this very spot had a tremendous reputation for producing some excellent spurdogs. Sadly recent trips had failed to turn up a single spur; this might tie in with reports that the loch has been clouted by commercial longliners of late.

With a couple of brown trouser moments narrowly avoided, we arrived shaken and stirred but with suspension intact. Our arrival was timed to coincide with the last of the ebb. Nothing happened until 30 minutes into the turning tide when Shaun’s rod tip trumpeted a good bite and his line fell slack. 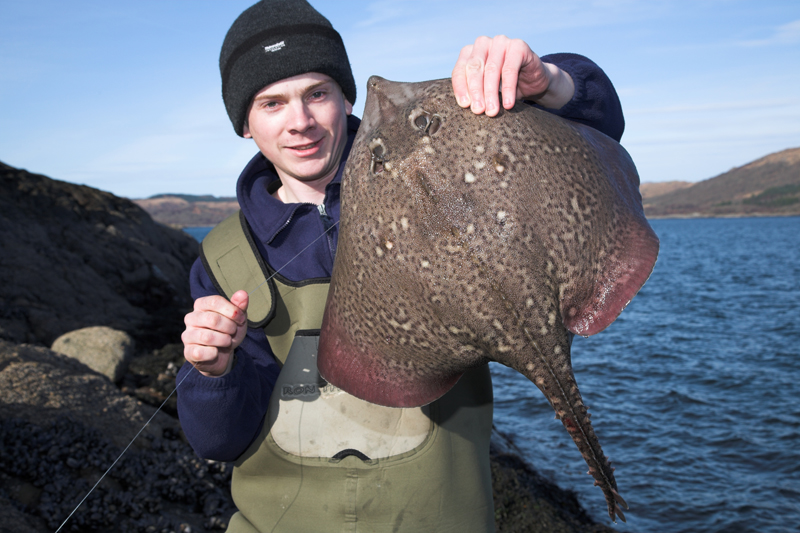 Loose line was tightened to firm resistance as Shaun worked the reel and began steadily pumping the fish shoreward. Apart from the very odd isolated snag, the only real complication is a submerged rocky fringe lurking in the last few feet. A typical ray of around 4lb came flapping to the surface well beyond the lip of the underwater hazard. Fish and grip-lead were perhaps 5 ft apart, the pulley rig having done its job and drawn the sinker up to the top swivel, clear of the seabed. Shaun kept the pressure on, finally steering the ray across the top, before raising the rod and swinging it to hand.

When it comes to photographs thornbacks are defiant subjects. Point the camera and the first thing they do is cup their wings backward, curling up like a rigid rubber mat. This can have the effect of making it look like the captor’s hands are on back-to-front! There was no coaxing a smile from this fish, so it was quickly slipped back. 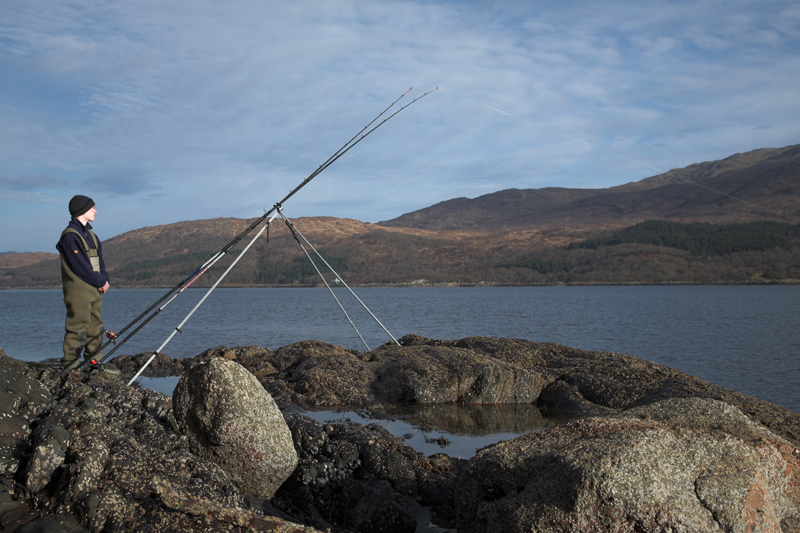 Shaun’s last visit to this spot with pal, Mike Kyle is etched in his memory. Not only did they catch a pile of rays, they were both locked in one-sided battles with probably the same almighty fish, which made mincemeat of them and their flimsy tackle. Mike’s gear screamed away on the ratchet first, and after several minutes of desperately hanging on, he was eventually spooled clean when the spool knot popped. Both lads would have put money on this being a big common skate in for a smooch around in the shallows.

And seeing Mike’s short-lived ‘dance with the devil’, Shaun hastily cobbled a beefed up, if improvised rig and cast out a bigger bait. 15 minutes later – a pick up, followed by a blistering run and an inevitable ping! This time around both Shaun and I had come prepared with what we trusted were back-up skate-proof set-ups. I hoped not to have to press mine into service as there is a time and place for this sort of thing, and our feeling was that previous encounter was unlikely to be repeated in a hurry. 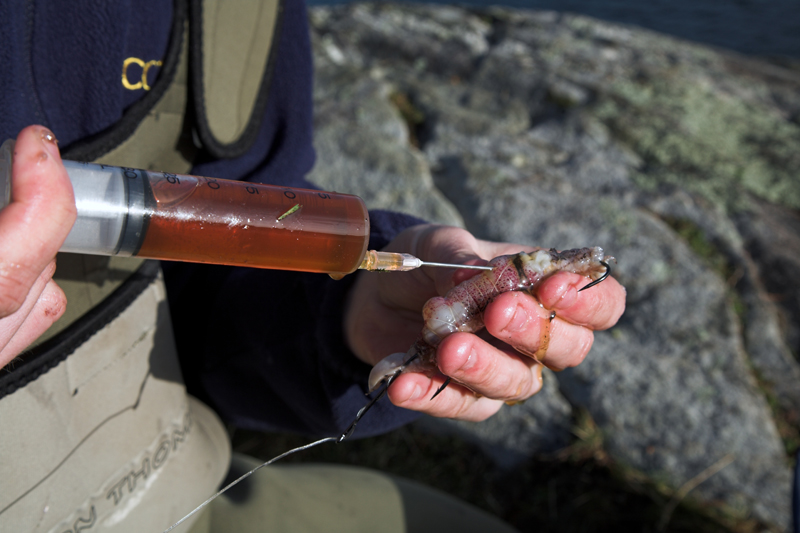 Simple pulley pennel rigs to 5 oz or 6 oz breakaways are all that are required. I have played with a fancy ‘up and down’ rig number for rays and caught no more fish than on a fuss-free pulley rig with a 30in snood of 40-50lb mono and 2/0 or 3/0 Kamasan B950U hooks.

Baits are no mystery either, with sandeel, mackerel and squid all good options. Sandeel is something of a confidence ray bait for me, only on this occasion we had none in the freezer. Meaty mackerel and squid baits bound together on the hooks with fine shearing elastic would do well enough.

A little trick is to inject baits with sticky fish oil for increased attraction. A bound squid visibly swells with slow-oozing bulbous lumps when bulked out with oil in this way.

As Lyall and I looked on, Shaun was again doubled over one of his rods, winding frantically to catch up a large belly of slack line which bowed without any preliminaries. A better bend told of a good fish, and Shaun had to work much harder to draw this one away from the security of the bottom. 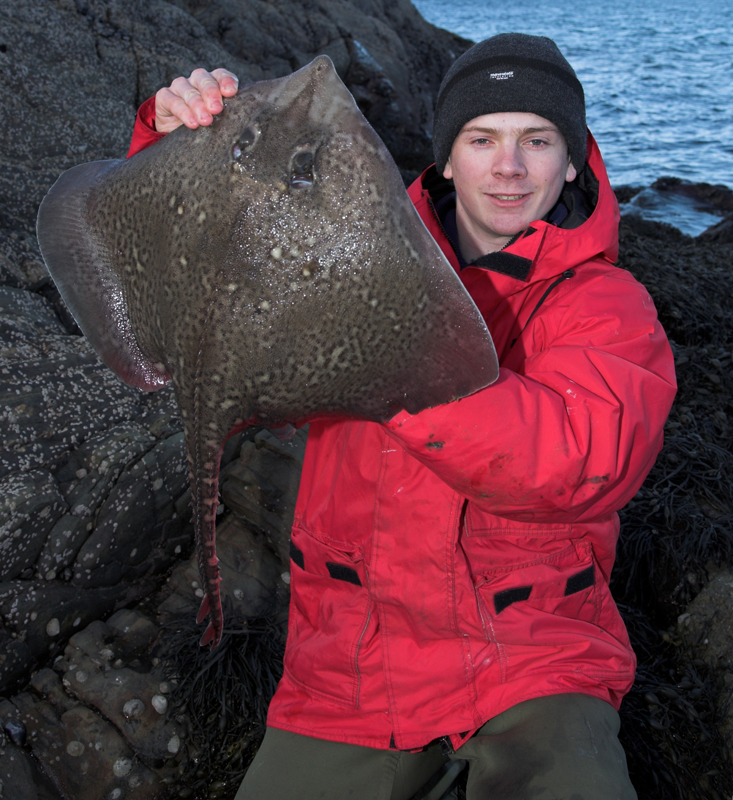 For a moment it looked like a rare snag would rob Shaun, but his perseverance won clear of the obstacle. A dark shadow glided into 2 inches of beautifully clear water at the base of the rock. Panic over, Shaun stooped and grasped a lovely thornback of around 7 lb.

A timely purple patch saw me weigh in with several rays but nothing over 5 lbs. Lyall, who was casting shorter, hadn’t had a sniff of a ray and a couple of tiny whiting and a small grey gurnard were the sum of several hours fishing. Apart from the fact that he probably wasn’t getting his bait out far enough, the other anomaly was he wasn’t injecting his baits with fish oil.

One problem with this oil is that it’s seriously messy, and if you don’t wipe your hands straight away after baiting up, it gets everywhere. Shaun will testify to this as in the rush to get a bait back in the water, he would invariably forget to wipe his paws. The regular result was a barked curse followed almost immediately by a splash as his thumb slipped on the spool and his rig fell out the sky 10 yards in front of him.

Shaun and I added another modest ray each before pride was finally discarded and Lyall begged to borrow the trusty hypodermic. Coincidentally perhaps, 10 minutes later his ray duck was broken with a thornback of around 4 lb…just don’t tell that I cast out for him! As expected, the fishing switched off on high water. We couldn’t claim any double figure fish, or big shore skate encounters on the day. But more than a dozen decent rays to the good, we scarpered hoping to avoid some of the scary creatures that you tend to cross paths with as the light falters. 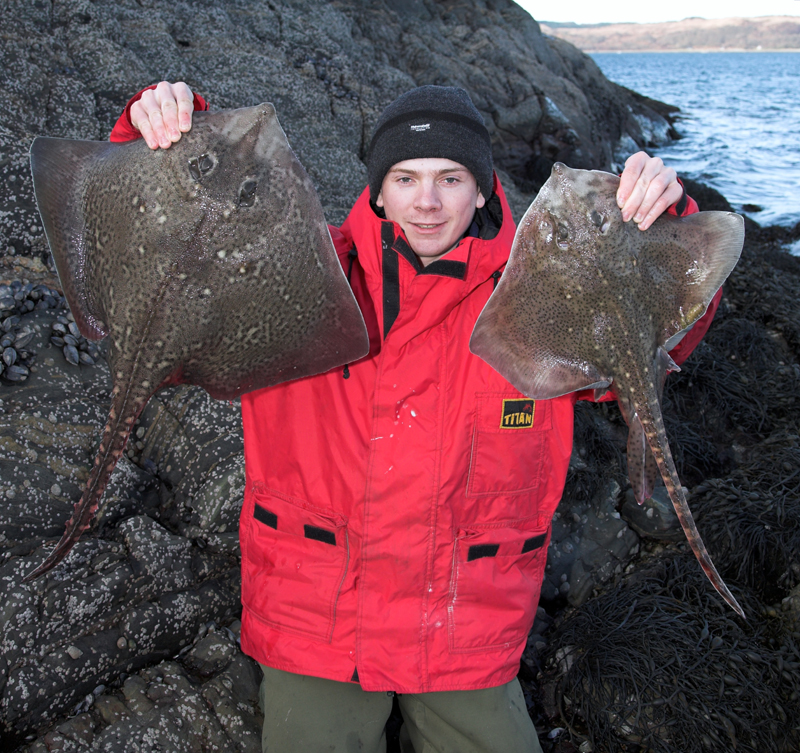 Apart from a narrow foreground ribbon of reef and boulder which skirts most of the loch’s edges, Sunart’s seabed is mainly comprised of soft muddy sediments, with depths falling away to 120 metres in places. At 28 kilometres long from mouth to start, Loch Sunart cuts deep into the face of western Scotland. Dividing the ancient lands of Morvern in the south and Ardnamurchan to the north, the loch is surrounded by rugged mountainside and glorious green woodland habitants, which are home to a diverse array of wildlife including sea eagles, red deer, otters, mink, pine martens…and perhaps a Sasquatch or two! 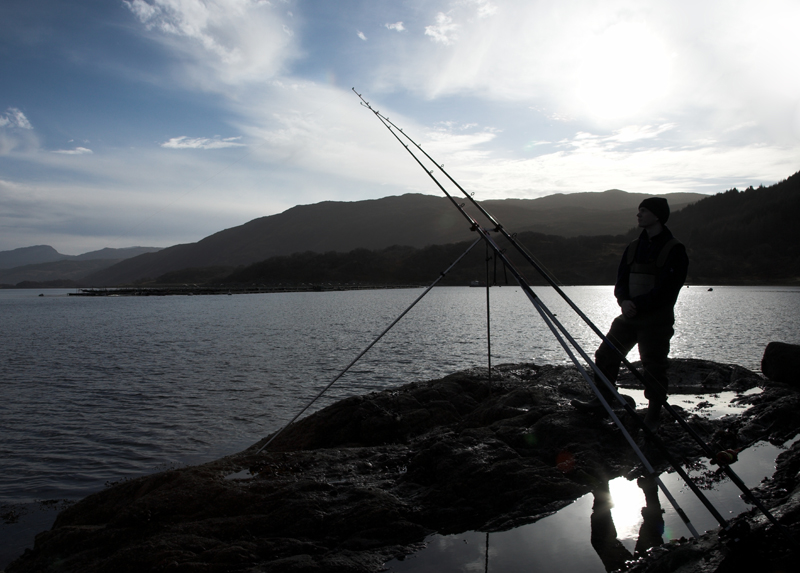 Follow the A82 from Glasgow, turning left at Crianlarich. Or alternatively, if coming from the central belt, take the A84 through Callander from Stirling, joining the A82 at Tyndrum. Thereafter, follow the A82 from Tyndrum through Glen Coe and Ballachulish to the Corran ferry at Nether Lochaber.Crossing fees are £6.20 each way and payable on boarding, ferry timetable.

On leaving the ferry at Ardgour, turn left picking up the A861 and signs for Strontian. From Sunart’s beginnings just short of Strontian, both sides of the loch are accessible via either the A861 to the north shoreline, or along the single track A884 for limited access to the south banks.