David Proudfoot is one of a group of well-travelled boat anglers responsible for introducing pirk casting to the UK. Deadly for cod and pollack, this constantly evolving technique has much to offer, as Davy explains.

Back in the mid 1980’s a group of anglers from the north of Scotland visited Denmark to fish the EFSA European Boat Championships. Lessons learned sparked a revolution in boat fishing throughout Scotland.

They had been given a spanking by the Scandanavian anglers when trying to pitthe traditional Scottish method of pirk fishing – large pirks fished vertically – against the locals using small pirks cast up-drift. Being quick to spot the possibilites of this method back in home waters, members of Caithness SAA and others up north soon proved the worth of casting with 100 – 150 gm pirks in the waters around Caithness and the Northern Isles. Gradually the method spread until it became widely used throughout Scotland wherever cod and pollack were the target species. 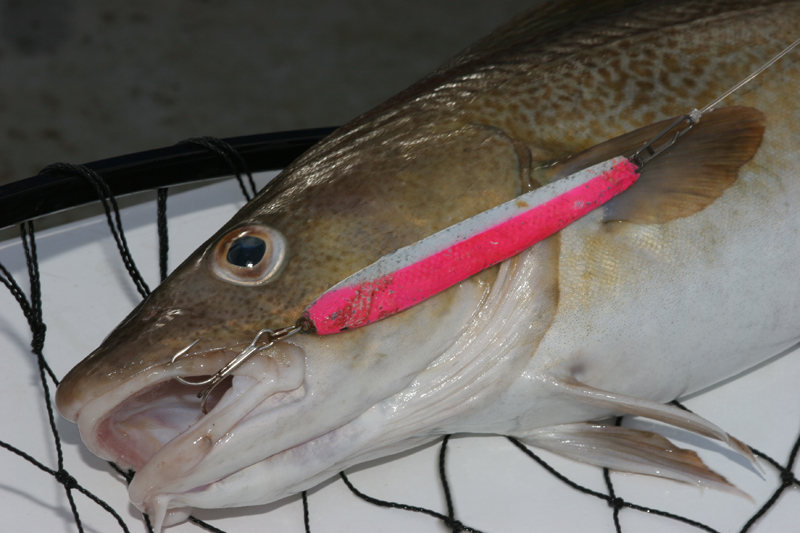 Traditional short ‘poker’ rods were quickly dumped in favour longer, lighter ones in the 6 to 20 lb class and these were matched by casting multipliers or even fixed spool reels more commonly associated with shore work.

This method has been refined over the years and continues to be productive when targeting cod and pollack in clear water up to 40 metres deep. And anglers nowadays are successfully up-drift casting not only with pirks, but also with leadheads or a string of artificial eels. With the advent of braided lines even lighter lures can be used when fishing this method.

The principal of this style of fishing is to cast the pirk, normally with an eel tied on a flyer above it, in the direction that the boat is drifting. This allows the tackle to be worked vertically for a longer time than the traditional down drift style of fishing, 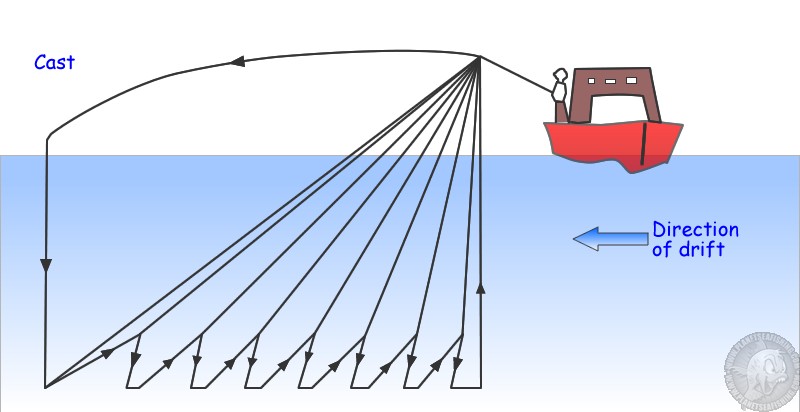 The lures are generally cast from the updrift side of the boat, distances varying from 20 to 50 metres depending upon the weight of the lure and the speed of the drift. The faster the drift, the further the cast to ensure that the terminal tackle reaches the bottom while still on the updrift side of the boat. When the lure hits the bottom, it is retrieved with a lifting motion which takes in slack line as the boat drifts towards the lure.

The upward stroke of the rod is normally a sharp double jerk unlike the continuous sweep of conventional pirking, giving additional action to the lures. On occasions the fish will take only when the lift is very gentle with little movement of the pirk, in this case most of the fish will come to the flyer rather than the pirk.

The speed of the winding retrieve is dependent upon the drift speed, but with cod the number one quarry the angler should always ensure that the terminal gear is close to seabed at the bottom of the down stroke. 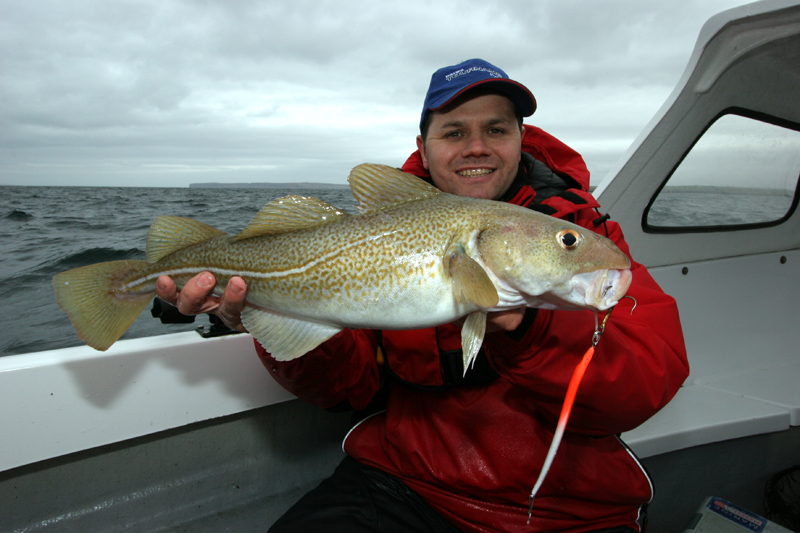 It is essential to stay in contact with the lure at all times as fish strike not only on the upswipe but also as the pirk falls to the bottom on the downstroke.

Where there are too many anglers aboard for everyone to fish from one side of the boat, those on the downdrift side can still work the small pirks effectively in the conventional manner. However, the amount of time actually spent fishing is reduced because the light lures move quickly from the optimum vertical position and the this necessitates frequent retrieval and starting the cycle afresh.

During the summer and autumn months pollack can be effectively targeted using pirks or casting strings of eels or jellyworms, and as these fish can be higher in the water, the lures can be fished ‘off bottom’and down drift with excellent results. When fishing primarily for pollack most anglers will fish a string of two or three artificial eels above a pirk fitted with or without a hook. The use of the pirk instead of a normal lead will impart an action to the eels as they free fall, and pollack into double figures will regularly hit the lures on the down stroke. 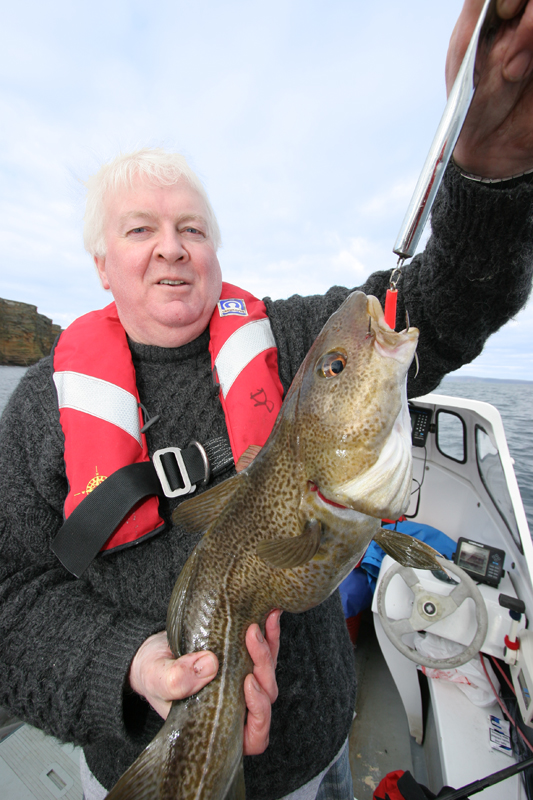 Leadhead with shads are becoming increasingly popular and they can also be used in place of the pirk with the casting method. The lift on the retrieve is generally more gentle than when using a pirk and the large size of the hooks used with the leadheads does help avoid the small coalies which can be a pain at times in the northern waters that I regularly fish.

Cod and pollack are not the only fish which fall to this method. Coalies, mackerel and ling are regular captures and it is not unual for wrasse, haddock and whiting to be landed too.

As with conventional pirking, the casting method works best in clear water, although replacing the treble hook with a single baited hook on a snood can be productive when the water is dirty.

There is a terrific variety of suitable rods available and current favourites include the Daiwa Kenzaki range and Gravell Anaga with the heavier tip. Some anglers prefer a stiffer rod when working with nylon, but generally, a softer tip rod is more forgiving when using braided lines. Uptiders can be used although the long handles do tend to get in the way when pirking. I still use a spinning rod and fixed spool reel setup with the shads and the lighter lures, the soft forgiving action will subdue the larger fish as long as you can keep them away from the snags.

More and more anglers are using the fixed spool for boat casting because of the ease of use when space is limited. They do, however take a bit of getting used to when trying to keep in contact with the sea bed. The majority of experienced pirk casters still use a multiplier reel as fishing ‘feel’ and lure control is very good. Any reel with casting control is suitable and most use reels around the ABU 6500 or 7000 size. 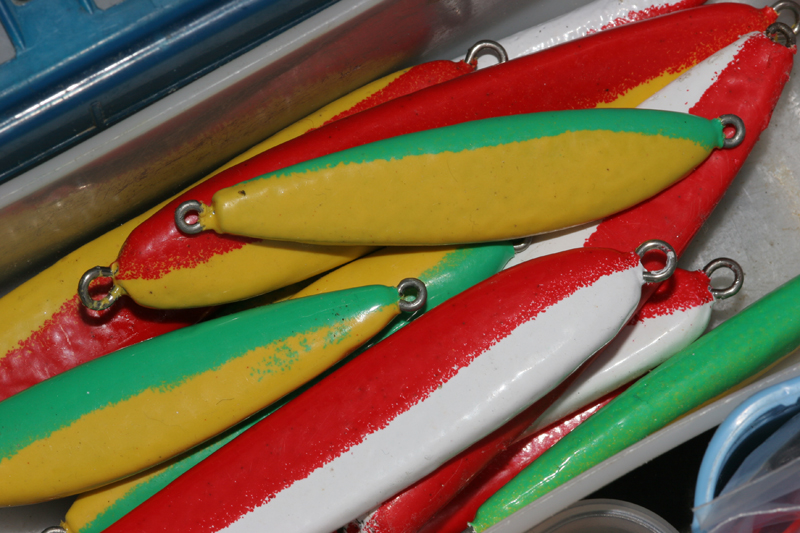 The pirks themselves vary in design, but they are generally long with flat sides both to aid casting, and to allow them to flutter down and induce takes on the drop. Silver, orange-and-white, or orange-and-yellow are the favoured colours, and many pirk casters make there own from lead. The lightness of the rod, reel and terminal tackle mean that this branch of sea angling is tremendously sporting … and best of all, there is no need to dig bait!