Paul Stevens struggled to carry all his prizes back from the Sardinian shore fishing tournament that attracts some of the UK’s top shore anglers.

Every now and then you get a lucky break in fishing. I had one a few years back when I got an all expenses paid invitation to fish a tournament on the island of Sardinia. I have fished this match for seven years now, and although the fishing can be very tough, it’s a fantastic week that opens your eyes to how fishing events can be run.

Organised by a large Sardinian fishing club called ‘Hippocampus’, the tournament is very much a multi-national affair, with representatives from 12 nations competing. Hippocampus is well funded and attracts excellent sponsorship, and to say that the set-up is 100% professional doesn’t tell half the story. There were numerous other anglers representing the home nations this year: We had Mick Dixon, Tommy Fogarty and Tony Byrne representing Ireland; Joe Arch and Dave Morrell representing Wales; Billy Buckley, Kevin Lewis, Barry Scholes, Drew and Catherine Higgins representing Scotland, along with Chris Clark, Cheryl Bellfied, Paul Parsons, Pauline Ferry, Paul King, Colin and Janet Sergeant, and myself representing England. 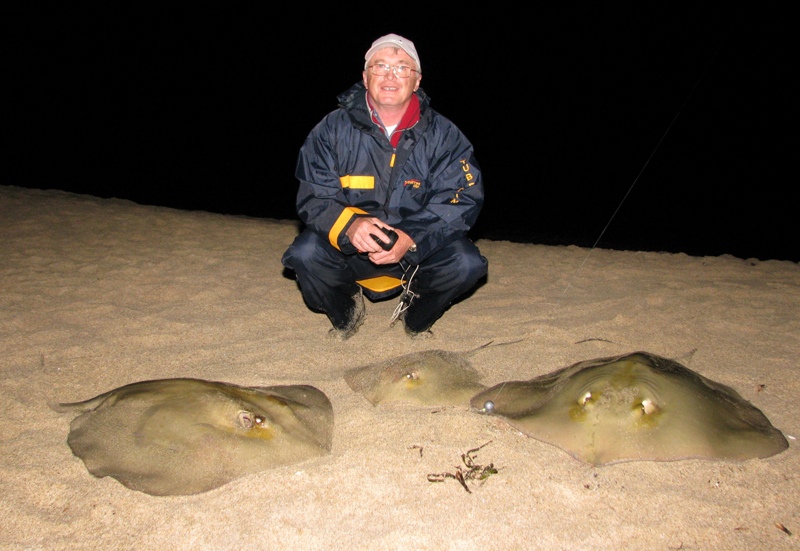 The two-day event usually attracts between 180-240 competitors, and is preceded by a specimen fish match. The first match of the week is the Citizen Watch sponsored specimen match. This allows the anglers to travel around the island of Sardinia in an attempt to catch one of the eight biggest fish of the night. Each of the top eight receives a very expensive Citizen watch. The winner this year by a hefty margin was an angler from Slovenia called Bojan. He won the event with a very impressive near 70lb stingray. Personally, I had a very frustrating start to the week by finishing 9th with a 9lb stingray; although we did have a very good night’s fishing. Dave, Chris and I fished together and caught 13 stingrays and an electric ray.

I landed the electric ray, and although small, I was not going anywhere near the thing. It was hastily released by snipping the hooklength. All these fish were taken on sardine, the local top bait for stingray. Unsurprisingly, stingrays won all the prizes, but there were a smattering of other species like bream and some absolutely enormous weavers. The two-day build up to the main tournament is spent making rigs, tying spare hook-lengths and populating the bar… and not necessarily in that order. You need to be well prepared for the main match as you are allowed two rods with three hooks on each rig, so things can get rather hectic.

Luck of the draw

Friday afternoon and the start of the main event was soon upon us. We were given our peg numbers for the day. The draw is done by computer and split into two halves, with 90 pegs on one venue and 90 on another. Basically, there are 180 pegs and each competitor will fish both venues over the two days. So if you drew peg 20 on day one, you would have a number higher than peg 90 on the second day, ensuring you fished the other venue. The 91-180 stretch of beach is the favoured end for stingrays, but with only 20% of their weight counting, it can be tough deciding what to target. The flipside is any sizeable fish is a bonus, as blanks – they are known coconuts in Sardinia – are very common. I drew peg 108 on the first day, which was not the best. Generally the higher the number, the better the chances of finding the stingers, but as there were only 10 anglers in each section the draw was not decisive. We had found the stingers in daylight during the previous specimen match, so hopes were high of catching early. With stingers in mind, one of my rods went straight out with two-hooks of clipped down sardine bait. 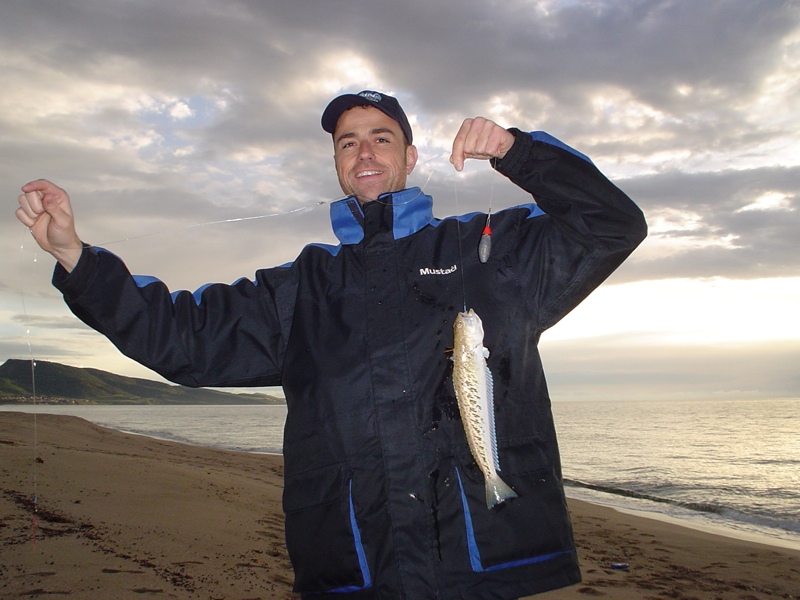 My second rod carried three hooks baited with a local worm called Arinicola. Mormora (goat bream) were the target here, and I cast extremely short, just behind the first wave, in the hope of finding them. The top snood was also dressed with a luminous pop-up in anticipation of darkness. Things were very slow for the first 2 hours apart from a stream of mini Mormora which were way short of the minimum size limit. But just as the sun began to set, I had a slow pull down on the other rod. I dropped the rig I was baiting and perched next to the rod in anticipation. There was no further movement for a couple of minutes and I was beginning to think I had missed the fish, when it pulled round again. Picking the rod up, I pulled into it and felt the weight of a stingray. At 3lb it was no monster, but it was the only fish in the section so far.

I hoped this was the cue for more stingrays to move in, but things remained very quiet, even as darkness fell. With an hour to go I had a chat with the steward – which was quite an effort as he did not speak English and my Italian is far from good – to try and get a handle on how the section was panning out. If my interpretation had it correct, there were only three fish in the section: my ray; another small ray to a Portuguese angler; and one of the Italians had a little bream that was just sizeable. I knew things were going to be tight and that one more fish would probably swing it. With 40 minutes to go I had a bite on the scratching rod which was now fishing at maximum distance with very fine diameter braid. I wound in feeling that there was some additional weight on the end and landed an occiata on the pop-up.

It was only about 4 ozs but deep down I thought that may have got me the section. The following cast I had another one which I wound in as the match finished. There were only five fish in the section and I had three of them. This, as it transpired, gave me a comfortable section win in the end. Several of the UK rods earned a good result on the first night.

Joe Arch was on song and landed rays for the best bag of the match. And there was also a zone win for Paul Parsons from Eastbourne. There were 18 zones in all. My zone had been very poor, and even with a zone win, I was lying in 13th place overall. Considering around 60% of the field blanked on the first day, I wasn’t too disappointed. 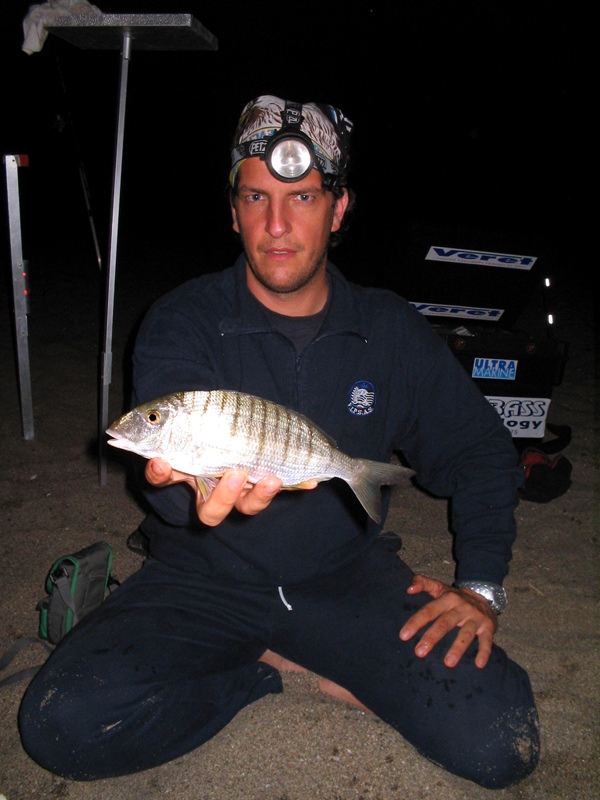 The following day saw me on peg 3 which I looked a good draw. This section had been the most productive zone on the first day with nearly all the anglers weighing in. I got on the beach early to get a good look at my peg which looked fishy. There was a bank of weed about 80 – 100 yards out which ran the length of the section and was about 20 yards deep. The only exception was peg 1 which looked a dream draw with weed beds interspersed with sand patches all over the place. Billy Buckley drew this peg and was looking to avenge his day one coconut. The plan for day two was to set up both rods for Mormora. One would be fished at maximum range, while the other would be used for scratching around the weed bed. Arinicola would be the top bait again for these. Early doors saw lots of tiny undersized Mormora and not much else.

Billy on peg 1 drew first blood with a small ray about 2 hours in. Three of the Italians then each caught sizeable Mormora in quick succession. Billy then added one of these just sizeable fish as well to lead the zone, while my bucket remained empty. Just as it got dark I had a stronger rattle on one the near rod, and opened my account with a small Mormora. 30 minutes later, the distance rod thumped over in the stand… bites on braid can be both exciting and deceiving. Taken by surprise, I jumped up and pulled into what first felt like nothing. I would in furiously, cursing under my breath, and thinking I had missed the fish. 20 yards from the beach, it got heavier. I could see a decent mormora darting sideways in the waves. I slowed right down and eased it safely up the beach. It wasn’t a giant at maybe half-a-pound it no monster, but it was very welcome on the night. Over the next hour I managed a further two similarly sized fish to claim a second section win.

Back at the hotel complex, the word was that no-one else had managed two section wins and I may have won. I have been in this situation before and knew there are always a few unknowns to come out of the woodwork. As it happened, one of the Italian national team anglers, Michael Maloni, who had won his section on day one and was sitting second overall, was rumoured to have blanked. In fact he had landed a single bream on his last cast which was a few grams bigger than the only other fish in his section. This last gasp effort ensured his second section win and the Magrini Champion title. Second place, also with two wins and an overall weight 30 grams more than me was another Italian angler. I finished 3rd overall. Although disappointed that I hadn’t won, it was still a great result and I wasn’t unhappy. 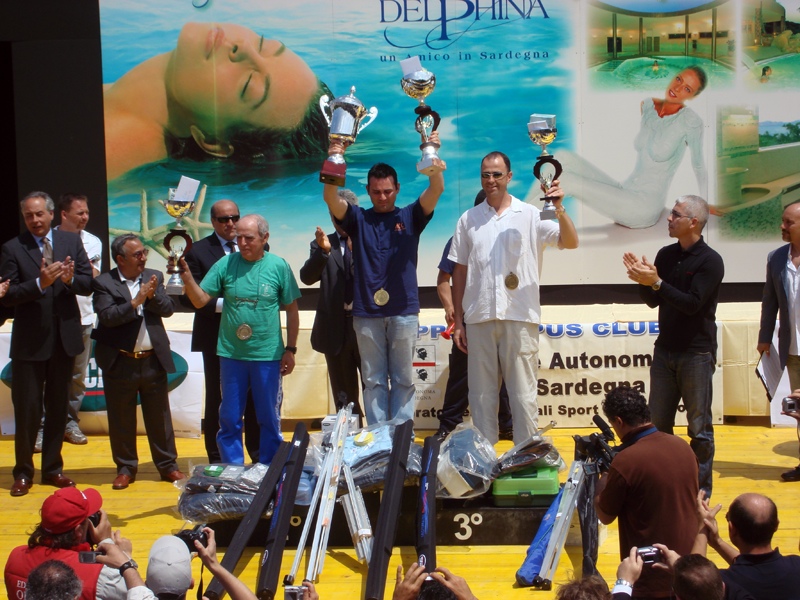 Joe Arch managed a 2nd in his section on the second day to finish 4th overall, as did Paul Parsons who finished 6th. Three UK rods in the top 6 was a great result, and an excuse to party! The following afternoon saw many hung-over anglers traipsing to the presentation. This is simply the most professional and organised event that I have ever had the pleasure of attending. It is held in an outdoor auditorium within the hotel complex grounds. There’s F1 style podium up on the stage, a DJ behind an awesome sound system, a compere, and all the sponsoring company executives suited-and-booted to present the prizes. Instead of a single photographer taking pictures at a main event, you had dozens of paparazzi and television cameramen jostling for the best shots for their respective magazines, papers and TV channels. 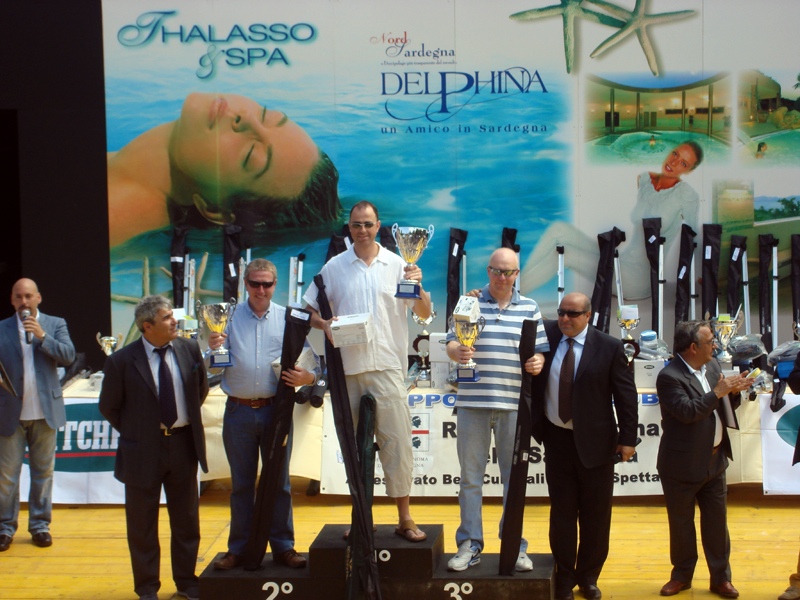 From start to finish the presentation lasts nearly 2 hours. The podium and all the pomp that goes with it was used on three separate occasions: awards to the top three fish winners in the specimen competition; the top three individual winners overall in the Magrini; and the top three visiting anglers. The prizes are fantastic, and my haul for 3rd overall and top visitor comprised of: three rods; three reels; a holiday in Sardinia; a Citizen watch; rod holdalls; two tripods; three monopods; various tackle boxes; a T-bar; a baiting station; miles of line; and two enormous trophies. It certainly made for an interesting trip though the airport!

Gaper Clams How to Collect and Use