Gaper Clams How to Collect and Use

The gaper clams are also known by local names like ‘soft clam’, ‘sand gaper’ and ‘steamer clam’. They are a fast growing shellfish with a maximum length of about 150mm, and older specimens can be as much as 25 years old. ‘Common to sandy/muddy shorelines, gapers are surprisingly under-used by anglers.

Smaller gaper clams are generally found in the upper regions of the shoreline, with bigger ones generally found towards the low tide extremes. Clams can burrow down a depth of 50cm, but they are easy to dig. Most anglers who dig their own worms come across such clams by accident. The unearthed gaper shells are a cream/grey colour running to dirty blue or even black. They are identified by their ovoid shape, and protruding feeding siphon at one end. Clams are found in large colonies in some estuaries. Like razors, their presence is often betrayed by a telltale key-shaped indentation or round hole in the sand or mud. 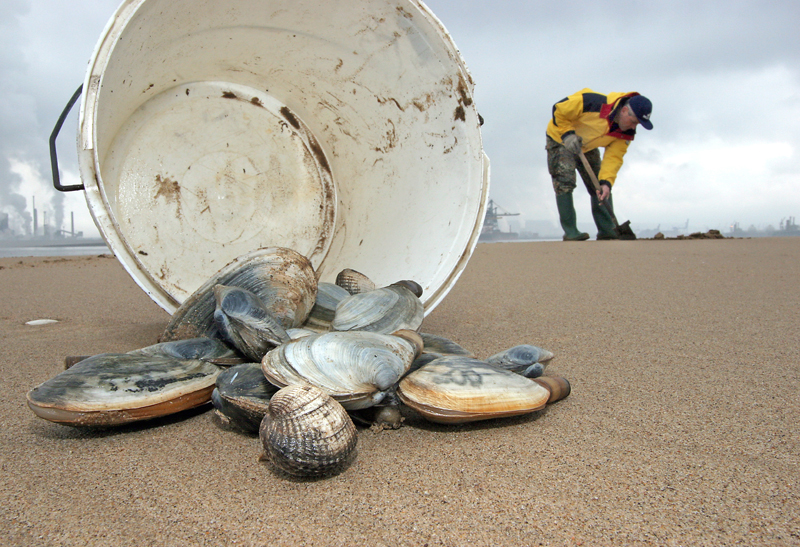 Gaper clams are generally found in sand near low water

To dig, first identify a likely depression in the ground. A spit or trenching shovel can be a lot more efficient than a fork for this type of work in some areas. Dig a hole around 40cm deep alongside the surface hole and then cut away, following the exposed burrow down to the clam. With a bit of practice you should be able to reveal the clam very quickly with little effort. Gaper clam is an excellent bait for winter cod from both shore and boat. Until recently when razors have became more pronounced in my area, clam was a favourite winter baits. Nevertheless, I still use them a lot and I never waste a clam. 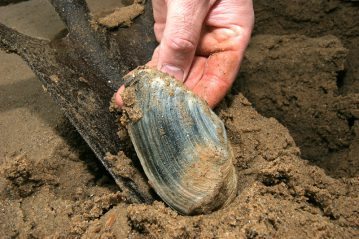 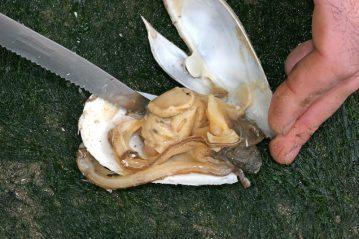 In the dim and distance past my biggest cod of 7½ lb was caught on a big clam bait, and it was many years before I bettered that fish. Like most shellfish clam tends to fish after a heavy sea or in a heavy surf when fish find them washed out of the seabed naturally. On the North East coast they are regarded as a ‘hard weather’ bait, to be used in, or just after severe conditions, but they can take fish at any time. I usually use clam as half of a cocktail with lugworm or ragworm, but occasionally I will use a big clam on its own. Clams are easily opened and removed with a dull knife or scissors. The shelled body and siphon together will make a big single bait, or can be cut into several smaller ones. The tougher foot, or siphon part is a decent bait in itself. Separate it from the fleshy body and remove the brown exterior membrane to reveal whiter flesh underneath. I usually cut the siphon lengthways and use it to bulk out worm baits. The body and siphon can also be cut into smaller tipping baits which are particularly effective for flounders. Secure the clam to the hook with bait elastic before casting. 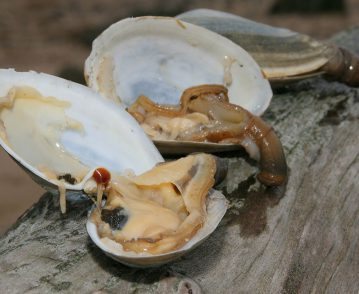 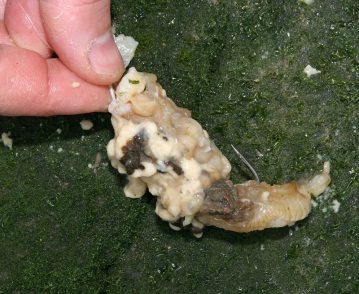 I have kept clams alive in a bucket of aerated water for several days, but I usually opt to freeze them for later use. I normally freeze clams down in the shell but you can just as simply freeze shelled ones. To freeze, rinse baits in fresh water before drying on newspaper and bagging. Place them on a metal tray in the fast-freeze part of the freezer. As with other non-vogue baits an amount of experimentation may be required to ascertain their suitability in your area. Cod, bass, flatties, and whiting are obvious targets, but there will certainly be other species caught on them.