Flatfish fishing has been slow this year but thankfully a decent number of brill are now showing. Good water clarity helps and this has improved of late…

Alderney’s normally fabulous turbot fishing has been something of a non-event so far this year. Increased commercial activity on the banks might be a factor, but coloured water and the fishes’ inability to see baits is the more likely reason. Brill normally play second fiddle, but the lack of turbot has brought these alternative flatfish more to anglers’ attention. Once located, brill are arguably easier to catch than turbot. They feed best in a bit of tide, and being a more active predator, they are more inclined to chase a live launce bait rather than lie in wait like their lazier cousins. A catch of 18 is the best brill haul reported so far. 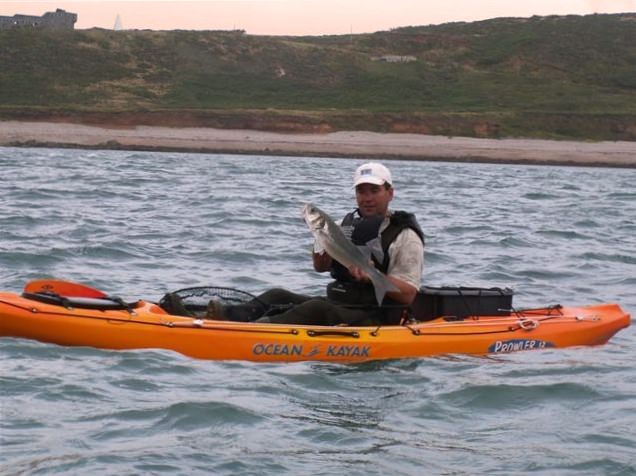 Brill fishing should remain consistent through to autumn, when we should see a second, hopefully better run of turbot. Despite a drop in numbers, some good fish have been caught. Regular doubles have been reported, with this month’s best hitting a very credible 17lb.

Bass fishing will be the main focus now. Boat fishing in the Race or out in the Swinge on spring tides for most action. But the best fish reported was one of 11lb from inside the harbour on a calm, sunny afternoon. Sandeel was the bait. Plugging around the rocks will provide plenty of action too, as long as you are in a more manoeuvrable smaller boat. Make no mistake, this can be a dangerous game. Intimate knowledge of the areas is essential before attempting to work close to the rocks and shallow reefs.

Black bream have slowly returned, and some excellent light tackle action around the rocky ledges and pinnacles can be expected now. The same ground produces conger eels, huss and tope. A 52lb tope is the best reported. Cuckoo and ballan wrasse feature heavily among various other regular species too.

Cod coming from both clean and rough ground. The wrecks are fishing very well with plenty of double-figure pollack complimenting good cod numbers. As I write, I’m hearing a report of more than a dozen cod to 23lb from a wreck close to the island. Next month will see a real increase in the species caught.

Summer shore fishing normally centres on holidaymakers catching garfish, mackerel, pollack and wrasse. Little happens on the bottom, simply because most concentrate on float-fishing. There have been early sole to 3lb however, with odd red gurnard and bass to worm. Mullet to 4lb in good numbers among the shoals, and fish to 8lb possible.

Fly fishing is growing in popularity with bass the main reward to those with a grasp of what can be a fantastic technique. Seeing is believing, and I have been well and truly convinced of the effectiveness of a bit of flicked fluff in the right hands.

Boat angling is my main passion, but I am dabbling in some kayak madness at the moment… and loving every minute. For reasons of exercise, I purchased a Hobie Mirage Outback kayak awhile back. The Hobie is the one with ‘cheater’ pedals! Fishing in the yak is incredible, and has to be experienced to be understood and appreciated. Using this stealthy approach you do seem to catch more fish. I’ve caught bass, ballans, mackerel, dogfish and pollack so far, and will no doubt catch more as I gain experience and get bolder. I did wonder what all the Kayak fuss was about, but I see it now – truly see it. We’ll see what else we get up to over the next few months.

October’s annual Angling Festival is fast approaching. If you’ve not booked yet, now is time to get the finger out. If you need any help, just get in touch with us. Autumn sees some marvellous fishing from the Alderney shore, and you can make contact with almost anything along the varied coastline.

In the meantime, thanks to all who visit us, sometimes more than once during the year. Tourism is so important to the island. The second half of the year always brings improved fishing, so fingers crossed for some terrific angling. If you do want to stay abreast of goings on, log on to my website www.alderneyangling.com and go to the latest reports pages.