Roughing it in the Race

Among other things Weymouth is rightly famous for bassing in the Portland Race and great big flatfish from the Shambles Bank. Steve Parker visits both of these fabled fishing grounds during a day aboard Supanova, skippered by Lyle Stantiford, and is rewarded with a personal best bass for his efforts.

Lyle Stantiford launched Supanova at the start of this year and it is testament to his skills and growing reputation that he is already well ahead of projected schedule for charter bookings. The boat itself is a modern 8 metre fast angling catamaran; its offset wheel house construction means that the entire length of the starboard side is fishable, making it more spacious than some significantly longer boats.

Weather conditions were excellent with bright sunshine predicted all day to take the edge off a chilly northerly breeze. A force five was forecast, dropping throughout the day, but with the wind direction staying in the north, there was no sea running at any point and we were even comfortable in the turmoil of the notorious Race.

Most of Weymouth’s charter fleet had anglers to take care of and the stone pier was bustling with anglers ready to enjoy the fine weather. The rest of our crew, three others from Wiltshire and a party of four from Southampton, were all aboard in good time and we passed under the raised bridge at 8 o’clock sharp.

It is only a short blast to the end of Portland Bill where the fierce tidal rips create the perfect hunting ground bass. Lyle set up the guys with hire rods and gave us all instructions on the bass technique. We would drift with live sandeels on Portland rigs bumping the bottom until we came to the face of a huge ledge. Lyle would then call for us to bring lines up some 15 – 20 to reel turns very quickly, and then we would drop down to find the bottom again before repeating the drift. This was the brief but it proved more difficult than it sounded!

The first drift was set and we headed towards the shelf. Results were instant with two of the Wiltshire contingent immediately contacting lively fighting fish, which hammered the quivering eels. Lyle didn’t mess about and the two of scale-perfect bass were quickly netted.

Confessions of a ‘Race’ Virgin

I wasn’t used to the ground or the method and really struggled on this first drift after we raised our lines to clear the shelf. My problem was that I wasn’t sure whether I was feeling the bottom again or whether I was still at risk of catching the shelf. I ended up in a tangle with two of the other guys on the rail. My eel was lost and we had to remove my hook snood to repair the damage.

Fortunately the Portland rig is simple to construct, and with the rig hastily retied, I returned to fishing. This time the whole boat got in a mess! Worse still, after the tangles were untied I was reeling frantically to retrieve my line for the next drift and didn’t seem to be making progress – I’d left the spool out of gear! Fortunately, I realised this before the spool emptied but of course when I put it back in gear I snagged the bottom and lost the weight, the rig and the leader. Having fished for 33 years I can honestly say this year has been the worst for self-inflicted disasters. When will I learn? 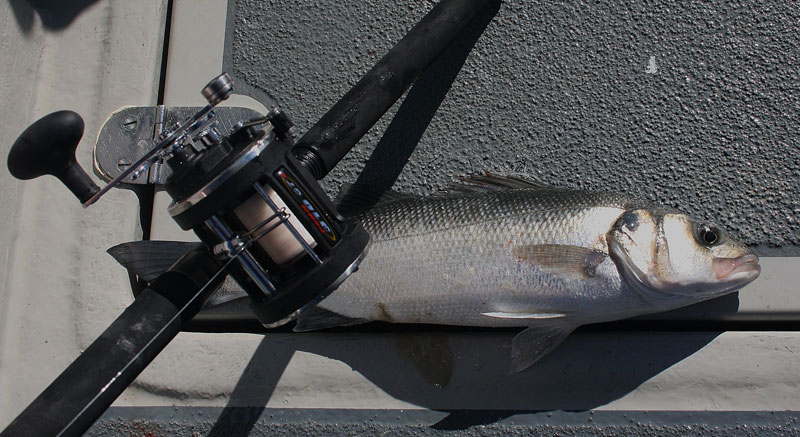 Lyle decided that this part of the race was too tough for us and decided to join the majority of the other charter boats fishing the back of the race, where the tidal rip stirs up the bottom over smaller ledges and mussel beds. Here we would be able to stay in touch with the bottom all the time and should experience less tangles.

Feeling a bit fingers and thumbs, I hastily tied a new leader in place – using a double Uni-knot detailed the Berkley web site – and found a ready-made Portland rig in my bag. This rig was one of Moonfleet Angling’s superb products… and it certainly did the trick for me!

Lyle set the drift up and we all got back down to the serious business of rooting out those hardy bass. Two minutes in and I had a terrific snatch, which hauled the rod over and caused everything to go solid. It felt like running straight into a brick wall… then nothing. My immediate thought was that I’d fallen foul of another snag, but that couldn’t be right because we were drifting apace and no line was leaving the reel.

I tried to pump-and-wind but all each lift did was give line which I then had to retrieve on the down stroke. Curious, Lyle came to investigate, at which point I felt perceptible head shaking movement… it was indeed a good fish. It seemed an age, rather than the real-time couple of minutes before I was able to make any ground on the powerful fish. Anxiety has a horrible habit of birthing all sorts of doubts but excitement kept any panic at bay. I did quietly wish though that I hadn’t chosen the 8lb Sonik boat rod and could call upon a little more rod-meat to better bully the fish. 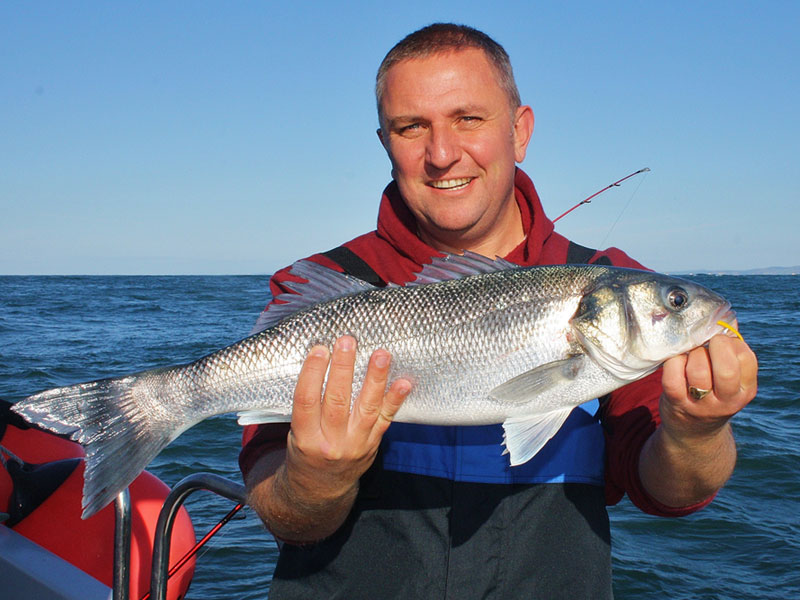 Eventually I started to make some ground and the fish became much more active. One of the most exhilarating light tackle battles I have experienced ensued and eventually the fish broke the surface having gathered two other lines on the way. Potential tangle disasters averted, Lyle was swift with the net and a gleaming 6½lb bass was mine. Not a specimen fish I’ll grant, but a precious one as it was my personal best.

Every Pass a Bass 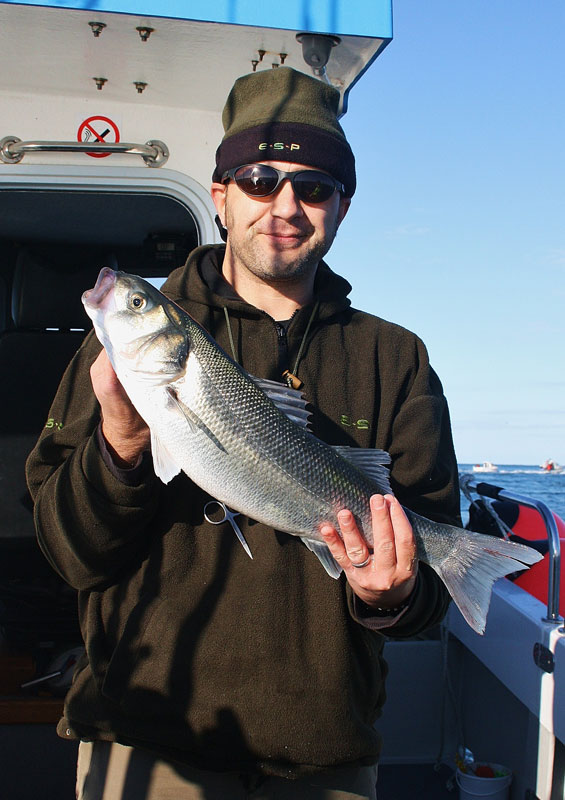 The crew now had its eye in and the next few passes all produced bass, with at least couple of fish coming on board each drift. Fish of 2 to 3 lbs were about the average, with odd larger fish of 4 – 5 pounder thrown in for good measure. I managed three more fish, two of them on the same sandeel as our supply was dwindling fast.

As the live sandeels ran out and the tide dropped, so to the bass action switched off. We headed off to the west side of Portland Bill armed with feathers in search of mackerel for bait. Mackerel were patchy with lots of small fish in the main, but we soon had enough and Lyle pointed the boat towards the Shambles where we hoped to cash in on some turbot or brill. And enthusiasm levels were high as there had been some excellent specimens landed in the Weymouth International Challenge competition only a week before.

The tackle here was exactly the same – a Portland Rig with a strong size 4/0 hook. The bait for this type of fishing is a long strip of mackerel hooked through the pointed end just once. The actual technique is to fish with the reel in free-spool, trotting line out under gentle thumb control. When the first knockings of a take are felt don’t strike, rather pay out 10 – 15 metres of line.

If there’s a difficulty it is in deciphering a bite as different from the thumps and bumps as the lead wanders over the bottom. Drifting over very uneven sandbanks sees every ripple and bump snatching at the lead, causing the rod tip to bounce and quiver the whole time.

We all lowered our baits to the bottom in strict rotation to avoid tangles. I couldn’t believe my luck, when I a bite straight away… or was it just the bottom? No, it came again, a definite bite. I released line as instructed by the skipper, gave it a few seconds, and wound in to the fish. It was there, then it wasn’t, then it was back again. The result was a garfish taken hard on the bottom.

The Southampton lads then showed the rest of us how catch flatfish however. A good size turbot – perfectly pan-sized in fact – which was followed by a lovely brill on the next drift. Another turbot followed that and served to highlight that good catches off flatfish are no myth from decades past. 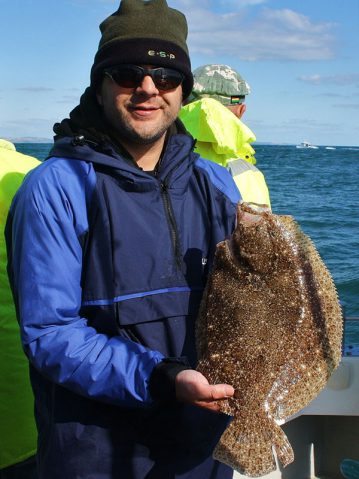 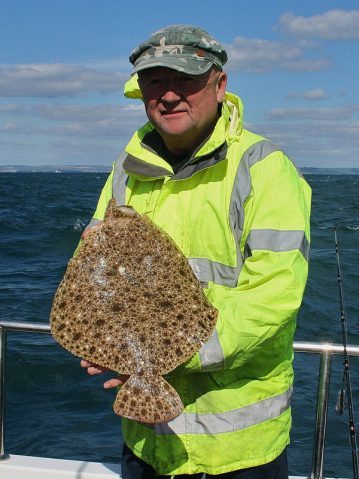 I was well off the pace with this type of fishing, but I was content just to witness it from a passenger perspective. I did eventually get a firm take and let the fish have the required amount of line. Over-excited caused me to start retrieving prematurely and the fish and the bait were gone. 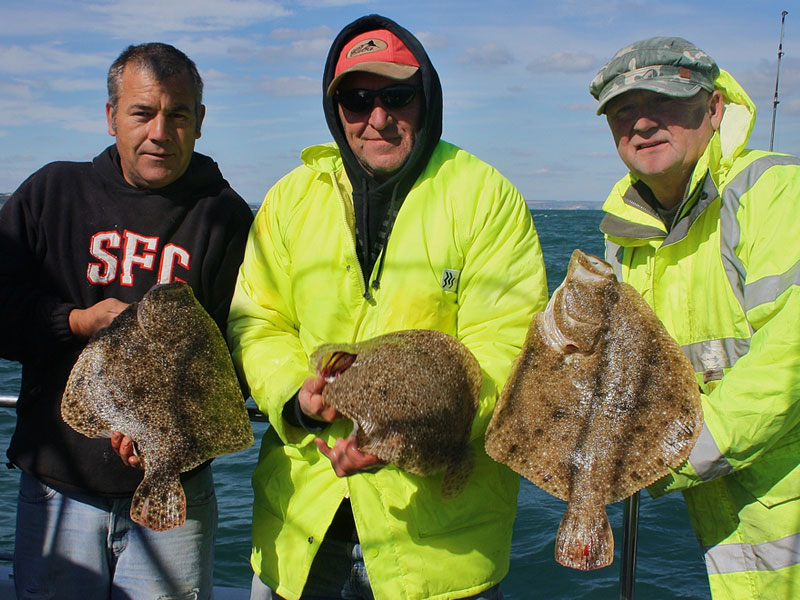 Finally, and not before time, I hooked another fish. A bass that might have gone 3lb surfaced only to flick its tail and shed the hook. I wasn’t too depressed to tell the truth, as I’d already caught enough bass for my needs. The fact is that I would have released the fish in any case.

While I was being philosophical, the Southampton boys landed a modest tub gurnard and a cracking brill to round off a great day’s boat angling. I can’t readily recall a day that I’ve had afloat where the fish were of such a consistently high quality. We didn’t encounter a single nuisance ‘cat shark’, pouting or poor cod all day and all of our captures were worthy of a photograph. And while I would’ve loved to have crashed in on the flatfish action but my day was made by 9am with my first fish… my PB bass. The turbot? Well they will have to wait for another day.