I always think fishing is a bit of a roller coaster ride with good days and tough days with just enough encouragement on the tough days to keep you coming back. Then there are days like the 7th June 2014 out of Weymouth on Atlanta when it all falls in to place at once; great plaice sport, great weather and excellent company – to remind you of just what a fantastic pastime sea angling can be.

My venue for the day was once again Weymouth aboard the excellent Atlanta with skipper Dave Pitman and Dee, the expert crew. Forecast from the met office suggested it would be a wet and uncomfortable day but all the other web sites were aligned to say we might get wet at first but by mid morning we would be on flat seas with warm sunshine. I just knew they would be right and in fact it ended up even better than that – perfect. The crew were myself and Atlanta regulars Portland Mick, Lightwater Mick and Jeff from Blandford. We were also joined by a group of three holidaymakers from the London / Essex area and a smashing couple from Cologne in Germany. The German couple are entrants in this year’s EFSA boat championships being held in Weymouth and had come to practice for the competition and pick some local brains. 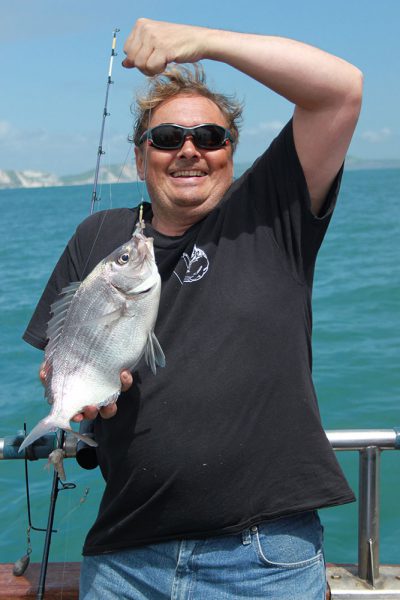 Dave explained that the formula for the start of the day would be the same as our previous outing. We would anchor a reef not far from Lulworth and try for some bream. When we arrived we had some of the forecast rain but it was not the deluge that had been prophesied in the news and it soon dried up. I started with a light spinning outfit but there was too much tide so switched to my trusty Ugly Battler and Penn Slammer fixed spool reel which can manage a good five ounces of lead – plenty to hold bottom at this mark.

The wind first thing was quite gusty and the boat was swinging about the anchor making conditions difficult for bringing the bream to the baits. The German couple were using continental style boat rods that are as long as a traditional beach caster. The rules for the World Championships stipulate that your trace cannot be longer than your rod and by using such long poles they can fish 12ft traces, providing the flexibility to cover more of the water column. They were instantly very successful at bagging up on poor cod and pouting. While I would never have considered targeting these fish, unless for bait, they are all worth points in competitions I guess, so worth chasing.

Despite the conditions I didn’t have to wait long for a bream bite, which unfortunately, like several more, did not result in a hook up. Finally, I managed to grab a small bream and hoped it might be the start of the feed as Portland Mick boated a similarly sized fish.

Then the dogs found us, lots of them, and I thought that would be our lot until we moved marks but then I got a cracking bite and the Ugly Battler bent in half. A lovely bream of about two and a half pounds was my prize and fought me all the way to the surface. Portland Mick also got us all excited with what he knew to be a ray and it looked like a good one until it surfaced and it turned out to be a small thornback hooked through the tail.

As mid morning approached and the sun came out Dave called for lines up telling us that we would head for the mussel beds at the back of the Shambles and try for some plaice. Dave and Dee had taken fish there earlier in the week and although not prolific they had been a decent nice size and quality. 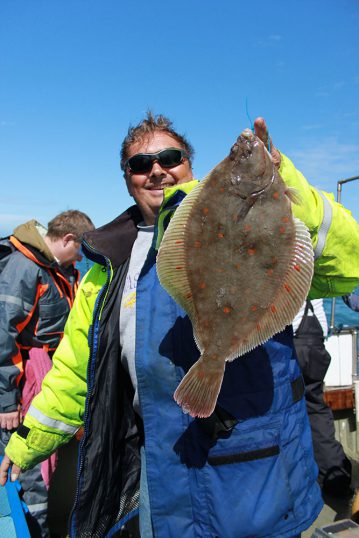 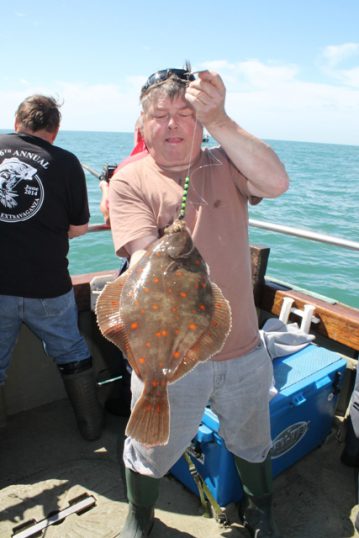 We set up for the first drift and I set up a traditional Weymouth plaice trace – a 14″ snood with black and green beads, a silver spinner blade and a 1/0 black Kamasan hook. I baited the hook with two rag worm, a prawn and a strip of squid – all supplied by Dave. I was merrily chuntering away that I hate plaice fishing because I can’t catch one in Weymouth to save my life when I thought I felt a bite. I let some line out and then wound down but felt no fish and when I retrieved my line the squid had gone. There was no time to get back down as I needed to give some space to Portland Mick who was into a fish. No self doubt from Mick and the plaice was soon to the net – a smashing quality fish approaching four pounds and a great way to kick off.

Mick was using a more elaborate rig with a spoon above the snood and baited his hook in reverse formation hooking a prawn first and then head hooking a rag to allow it to stream out behind the hook. Seeing as he wasn’t using squid I decided to follow suit on the next drift but wasn’t adventurous enough to try the unorthodox hook loading.

I let my mind wander with no expectation that I would hook my target fish. Portland Mick was already in to a second and the German contingent were now showing a strong interest in his terminal tackle marking it down as a useful tactic for September. Mick’s second fish was another cracker, just over four pounds this time. 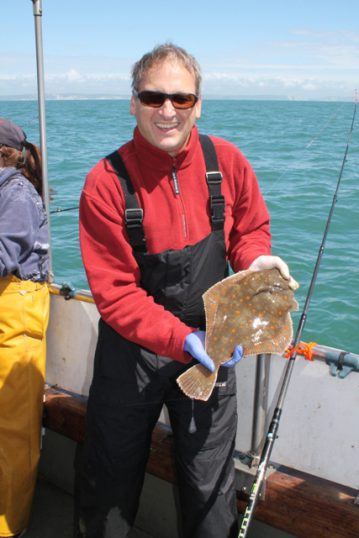 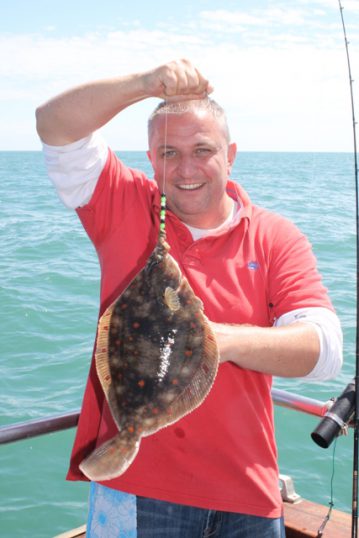 As I pondered why I found this fishing so difficult the steady twitch and rumble of my weight over the rough mussels was disrupted by a positive, if tentative, jag on the end of the rod. I gave the fish lots of line and waited, then as I wound down it felt like an age before I made contact with the weight and then felt the fish. A few turns off the seabed and the fish flapped and took some line, no doggie then. Neither Mick or I could believe it, I was actually in to a flattie, a nicely conditioned plaice of about two and half pounds. Other than a small returned fish, this would turn out to be the smallest plaice of the day but that didn’t matter to me, I had actually caught one on the mussel beds. 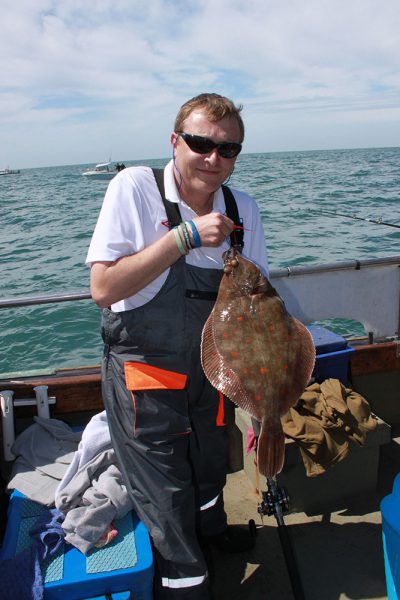 Then they started to come regularly. a few fish on every drift and always coming in bursts. The quality of the fish was astonishing with nearly every fish being in the 2½ to 4½lbs range. The sport slowed down a touch but the mussel beds weren’t done with us yet as Portland Mick bent in to yet another obviously heavy specimen. He took it steady with patience I would struggle to maintain and it was Dee who was ready with the net to scoop up Mick’s cracking 4lb 14oz fish.

While Mick was celebrating his success I was ruing my missed chance having hooked what felt like an excellent fish that threw the hook after only a few turns. As I considered that at least I’d had a couple and that was two more than I had expected I felt a decent tug on my line. This time I was taking no chances and gave the fish loads of line. When I wound in to this one I knew it was my best fish of the day and I tried to show the patience that Mick had shown. In truth the fish gave me no choice taking a number of strong runs before Dee was on hand to secure the fish in the net, at 4lbs 5oz it was the biggest plaice I have ever caught.

The final twist of drama on the plaice grounds would be for the German team. Kat had been stoically watching everyone around her, including her husband, catching these prime fish but failing to attract a bite herself. As the tide died and we were considering moving, she finally had a knock on her rod and the fish was hooked. Kat fought a patient battle on her long telescopic rod and when the fish came in to view it was a clonker, definitely in the 4 to 5lb range. Kat, however had wound the fish very close to the end of the long rod and she was unable to manoeuvre the rod to bring the fish close enough to the boat to be netted. To try and solve the problem she activated the baitrunner switch on her fixed spool reel to release some line but when she turned it off the fish took a huge dive and broke the hook, gutted wouldn’t even get close to her level of disappointment. 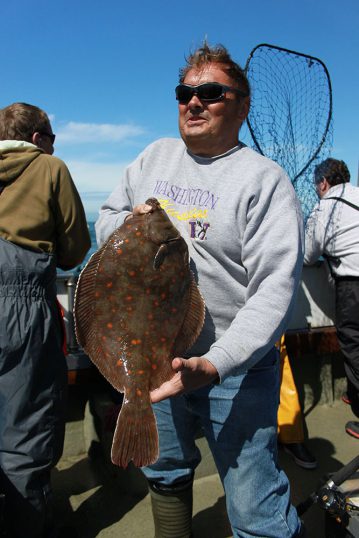 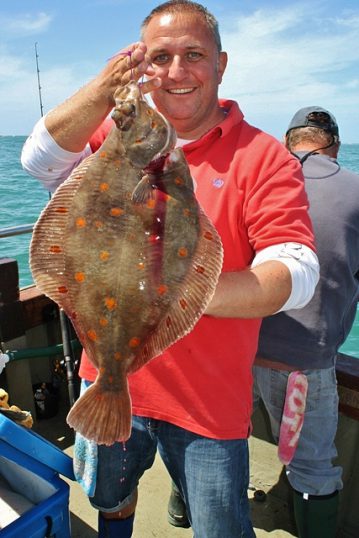 With the plaice going off the feed it was time to go back to the reef and try for some more bream. I grabbed my favoured gear again and baited with half a squid head on each small hook and it was Portland Mick who was again the first to find the fish. The bream bites were prolific in the afternoon but felt very tentative. Eventually I got the measure of the bait thieves and managed about half a dozen small bream, all of which were returned to grow larger. 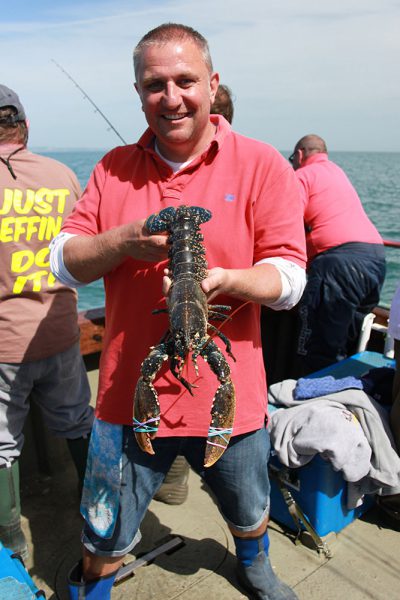 The bream were hard going at the mark again and the dogs were an ever present nuisance. We did however add whiting, dab and gurnard to our species tally.

As the day drew to a close I had another very small bite, poor cod I thought. I wound down in to what was a decent weight but offered virtually no fight. As it appeared through the May bloom I could see a mixture of orange and dark blue and thought “wrasse?”. Then I could see what it was, “lobster” I shouted, followed by “net, net, net!”. Dave covered the distance from wheelhouse to stern at a pace Usain Bolt would have been proud of, neatly taking the net from its holster on the way through. He took his time in ensuring the net slipped under the catch without bumping it and then in one swift move it was on the deck. My first ever lobster and a smashing one at that, 3lbs of the very best eating in the ocean.

So that was it, the end of what was a brilliant day with my first ever lobster and a personal best plaice. I often think that while the account of the fishing and the trophy pictures are important they don’t necessarily convey the unique atmosphere of a day’s fishing on an excellent boat with friends old and new. Mick once again kept us in stitches with his verbal sparring with the skipper. The German couple were charming and a great fun addition to the day while the chaps from London / Essex / Herts got stuck in and also made great company. Add these ingredients together and you have an unbeatable recipe for a great day out.