If Carlsberg did plaice fishing they would head to Vestmanna in the Faroe Islands and hook up with Magni Blastein for a session or two chasing these red spotted beauties. Situated in an area of sheltered fjords on the island of Streymoy, the sand banks around Vestmanna host the largest average size of plaice that I have ever seen.

I doubt if there is any other venue in the world where you can be almost guaranteed a five pound plus specimen plaice and be able to fish in weather conditions which would cancel trips from any other port.

The skipper, Magni, started fishing with his father with short lines for the larger halibut around Vestmanna but, through research, he has discovered the joys of plaice fishing close to home. The first of his flatfish marks is barely ten minutes steam from his sheltered mooring. Myself and friend Ally Campbell barely had time to dump our baggage in the self catering accommodation above the harbour before we were boarding the boat and within two hours of disembarking from the Edinburgh flight our rigs were in the water. 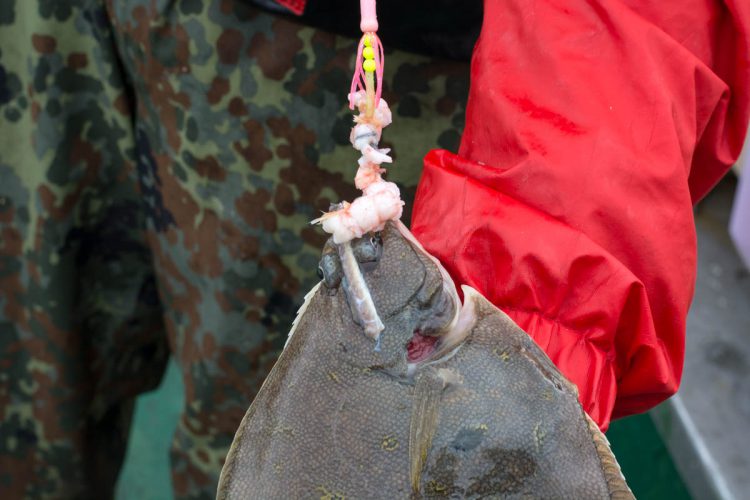 The benefits of the Faroese ban on trawling within six miles of the shore soon showed as a procession of plump dabs came over the rails. These were not the palm sized fish of home waters but fish with an average of one pound and plenty around a pound and a half in weight. Ally then had a more substantial take and the bend in his Greys rod indicated that this was a better flatfish. As the sandy coloured shape emerged into the clear water I swore that it was a turbot. 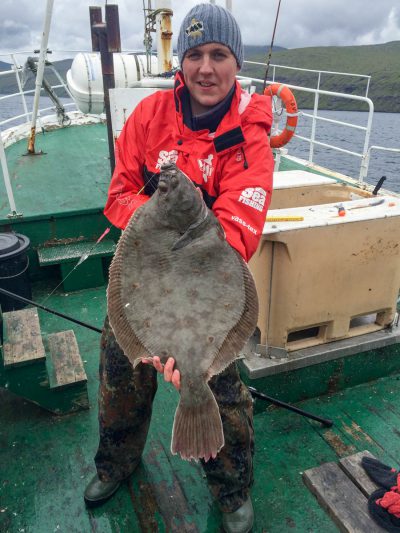 However a cracking, dark, faintly marked plaice soon nestled in the landing net. The bite, like all of those from our plaice, was comparatively delicate with no real indication of the size of the fish, totally unlike the savage rattles from the dabs or the distinct thump from the cod which also showed up.

Unfortunately the batteries in the scales decided to give up the ghost but at 73 centimetres long this monster was certainly a 10lb fish. Like all the large plaice on Magni’s boat the fish was returned to fight again, as the skipper says “plaice in the Faroe Islands die of old age”. The skipper also picked up a fish of 50 centimetres while Ally added a second fish which measured 53 centimetres to complete his first successful stint in the Faroes.

The following day was spent general fishing as we prospected the venue to assess its potential for future trips. However we could not resist another drop or two on the bank at the mouth of the fjord to see if the plaice were coming out to play. Again our baits were under constant attention from the ever present dabs several of which managed to hook up despite using 1/0 to 3/0 hooks. In some cases their mouths were simply stuffed with bait and spat out the bait and hook on landing. 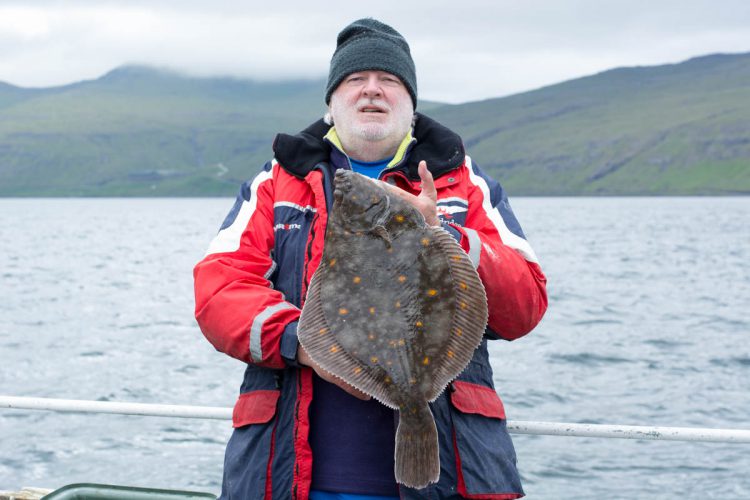 On the second drift it was my turn to experience a more substantial bite, distinct from the energetic dab rattles. I had rigged up my 1-9 gram Daiwa Exceler 7ft rod and this bent into a pleasing curve which softly bounced under the weight of the fish. The fish gave a spirited fight on the light tackle with a couple of powerful dives as it reached the daylight penetrated depth near the hull. A swift dip with the net and Magni secured my personal best plaice of 6lb 9oz.

Two days later we met up with Magni after a day on the shore and he suggested a quick hour out for the plaice while the weather remained dry. We needed no second invitation and were soon steaming westwards to try and tempt another of the big spotted flats. We had a couple of smaller plaice, around the pound mark before Ally wound into another substantial fish. After a short battle a cracking eight pound plaice hit the deck much to Ally’s delight. 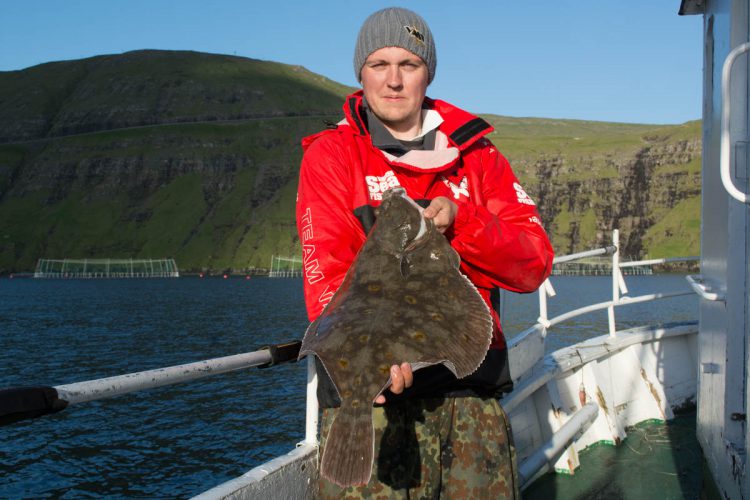 Our final day before flying back home was successfully spent shore fishing off a mark between the local boat sheds and we’d arranged to meet the skipper for a last session on the sand bank. This evening trip was to proved the most productive of the week as the big plaice fed with gusto.

Magni was first in as a 5lb 8oz fish hit his unembellished, shrimp baited rig. 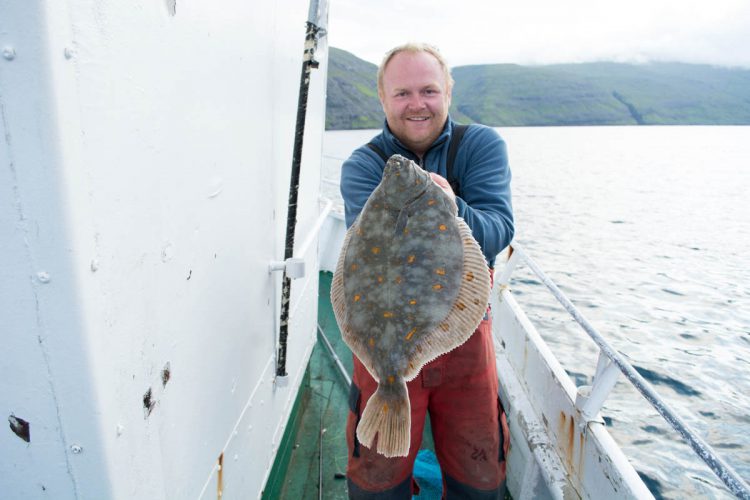 Then it was Ally’s turn to land another lovely orange spotted plaice which bumped the scales down to 7lb 5oz. 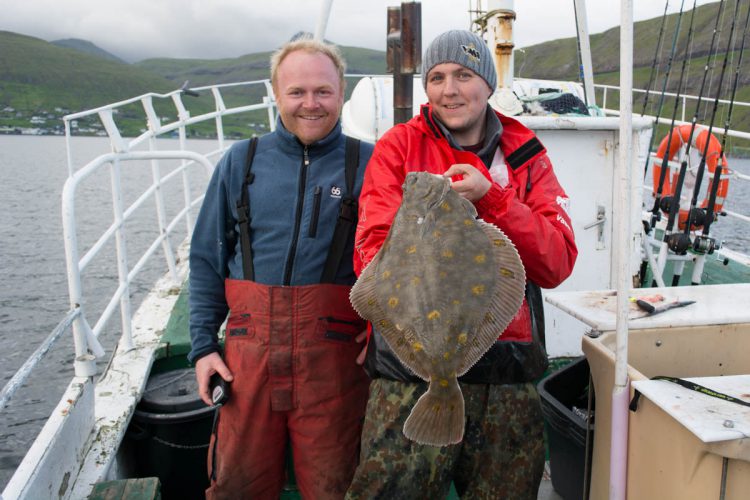 The final fish of the night and the trip was a spectacularly marked fish, weighing the same as Ally’s, which took a fancy to my long string of black and green beads. 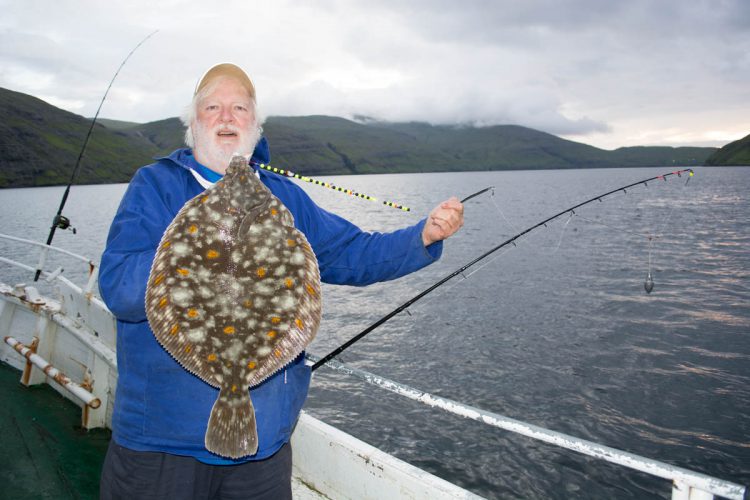 Although the skipper has decent Penn rods and Shimano reels on board they are aimed at the more popular cod fishing and we used lighter tackle to increase the enjoyment when tackling these powerful fish. The shallow fishing depth over the bank comprising of coarse sand, between 20 and 10 metres, and moderate tides allowed us to use weights down to 75 grams on light spinning gear. The drifts were generally slow as the marks are surrounds by high, verdant, green basalt cliffs which betray their volcanic origins as they rise steeply from the shores of the fjords, affording excellent shelter from most wind directions. 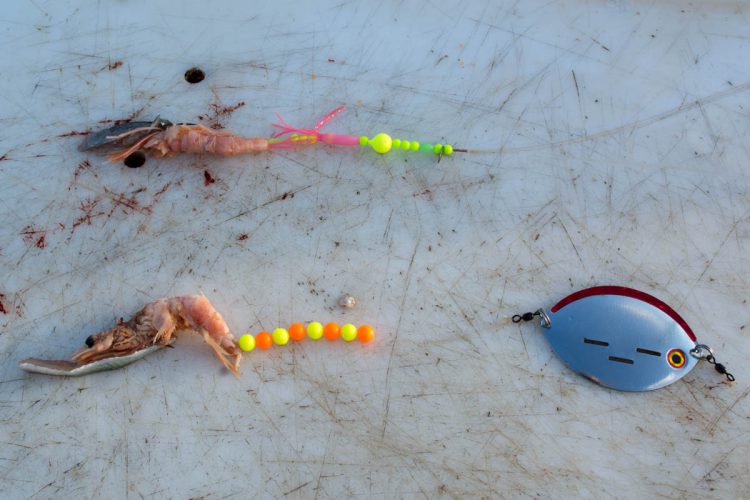 The skipper and other anglers used very simple terminal tackle with a one metre snood tied off the weight to a single, unadorned 1/0–2/0 hook. Ally and I did find that a bit of bling seemed to help out with a spoon above a string of beads or lumi tube with a small muppet at the hook. These were fished off a boom, either a standard French boom or one of the tubing variety. My biggest of the week fell to a Weymouth style bling rig loaded with beads below a lightweight, thin spoon. I also fished with the Danish rigged baited pirk which proved popular with the dabs but resulted in a couple of plaice being dropped, possibly due to the short snood not allowing sufficient time for the hook to take hold. 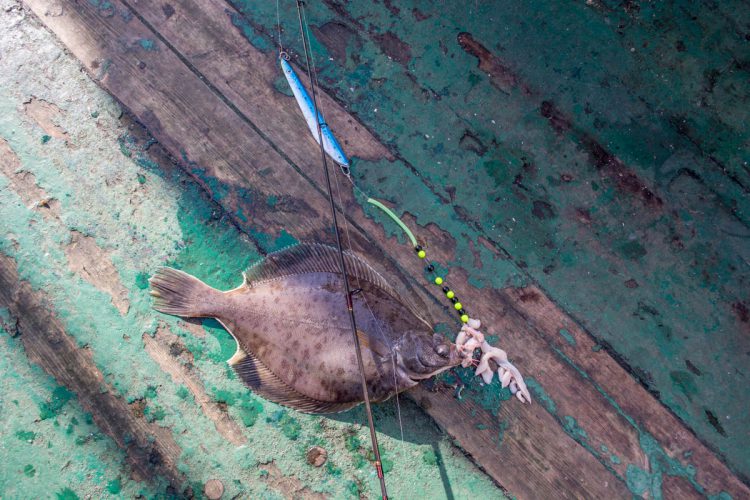 Bait wise things are very simple, no need to get the fork out and go digging. The skipper supplies frozen shrimps, the deep water type, and these were defrosted, shelled and then secured to the hook using my Ullcatch Bait Weaver, which now resides in the Faroes with the skipper after I noticed his covetous glances as we baited up. Two or three of the shrimps whipped to surround the hook provided a substantial bait. We found that, despite the attention from rattling dabs, the addition of a strip of sandeel or mackerel by and large produced more productive results with the plaice. Interestingly, Ally used large, garden lobworms left by a previous charter group cocktailed with the shrimps to land his first two plaice.

If you’d rather take your own tackle than use the provided gear I would recommend a travel rod in the 6 to 12lb class with an appropriate multiplier or fixed spool reel. A spinning rod would be my choice as it can double up for shore fishing around the town environs where cod, dabs and seatrout patrol the shoreline.

With the newly established Atlantic Airways flights from Edinburgh a long weekend in Vestmanna should be on every angler’s bucket list. Magni has package deals where you fly out and fish Friday, Saturday and Sunday and return home on the Monday. Accommodation is in excellent self catering houses or flats. You will find the locals friendly and most have a good command of the English language.

While I have enjoyed some decent plaice fishing in the UK I have never experienced a venue where the average size is so big and on marks where nothing short of a hurricane would keep you from fishing. The opportunity to fish for these big flatfish with light tackle is not to be missed and I can’t wait for a return visit next year to target “Magni’s pets”. 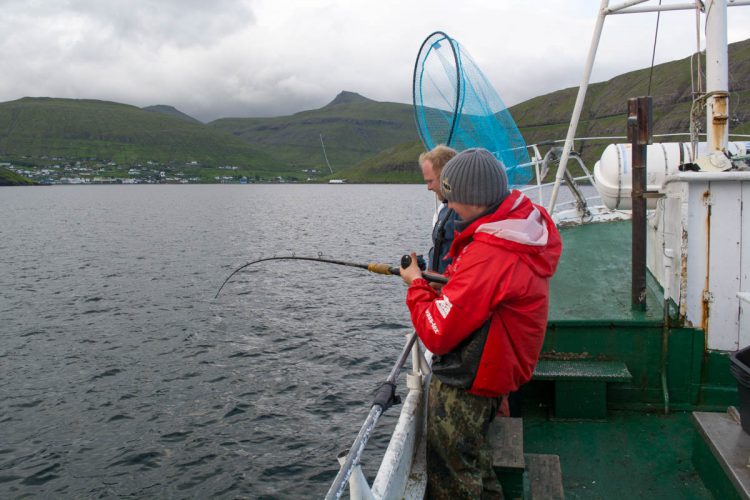 62oN now have a weekend package deal set up to fish with Magni including flights, accommodation and fishing.