The port of Oban is arguably the giant skate capital of Europe, but there is much more to the location. Planet Sea Fishing takes a look at the boat and shore fishing that the town and its surrounds offer.

Whether you approach the Argyllshire town of Oban from the south, north or east, scenery and images to fuel every Scottish stereotype accost the senses during summer in particular. Steep-sided glens, dense coniferous greenery, rushing mountain streams and the odd highland cow all mark the road into the town before the fresh smell of salt trumpets your close proximity to the sea. Oban is a hive of charter and small boat activity with the mainstay of fishing in painfully deep water between the 40 or so islands dotting the Firth of Lorne and entrance to the famous Sound of Mull. The large island of Kerrera together with Innish, Heather and Back islands are but some examples found in close proximity to the port. 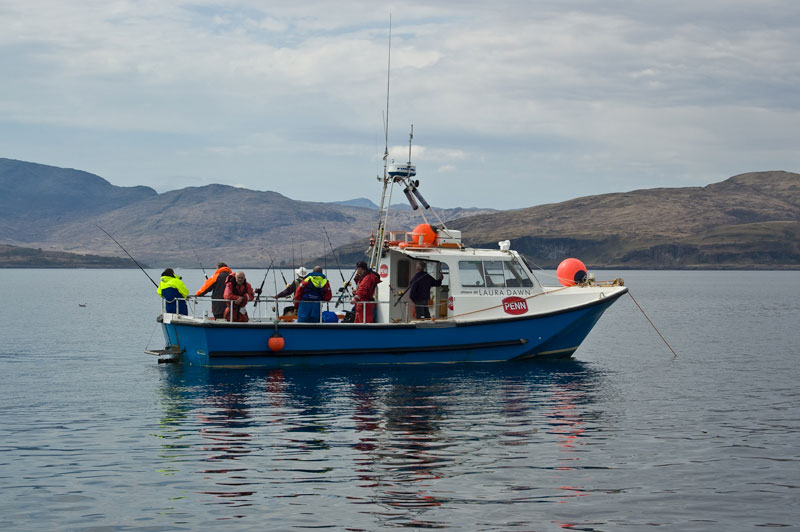 With a 200lb or bigger common skate perhaps more likely here than anywhere else, and a seemingly endless stream ton-plus giants routinely boated each year, Oban is arguably the skate capital of Europe. I mean no disrespect to some of the excellent Irish venues by this, it’s just there are times when the charters boat more than a dozen huge commons in a session, and no betting man would wager against an Oban skate. The surrounding sheltered waters are also an excellent venue for the small boat angler wishing to add this ton-up species to their list.

The promise of a big skate can however detract from the good alternative fishing available on the very same open ground. Many other large specimens and humbler species frequent the predominately mud bottom, with conger, thornback ray, ling, numerous spurdog & lsds, blackmouth dogfish and more occasional put-ins like tope, large cod and even hake all featuring. Drifting or anchoring in much shallower water close to the islands can mean excellent numbers of pollack, ballan and cuckoo wrasse, while some of the deeper rocky marks produce strap conger, ling and pollack to double figures. July, August & September are the most reliable months for fresh mackerel, which are normally present in large numbers between Lismore lighthouse and Duart castle. 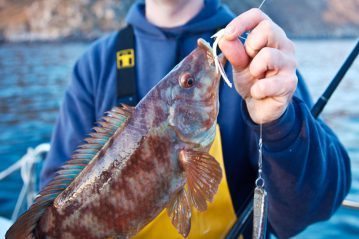 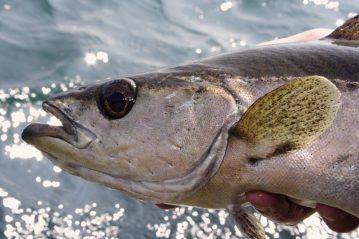 Much of the fishing takes place at anchor in upwards of 350 feet! Indeed some of the more noted skate marks lie in closer to 500 feet, and even deeper holes falling to more than 750 feet are clearly marked on the charts! Small boat anglers have taken skate in much shallower water but the top skippers find more reliable sport in deeper areas.

For all that it appears prolific, this localised skate fishery is a fragile one, and provided there remains no real commercial interest in the species, positive measures can be taken to sustain it. The much publicised tagging program initiated by Glasgow museum, continually monitors skate captures and movements. With the co-operation of skippers and a handful of dedicated skate anglers like Clydebank’s Davy Holt, the program has also been responsible for producing the length/weight charts now used to calculate skate weights with the intent of getting fish released as quickly as possible. This is the realm of civilised fishing and under no circumstances should skate be killed. 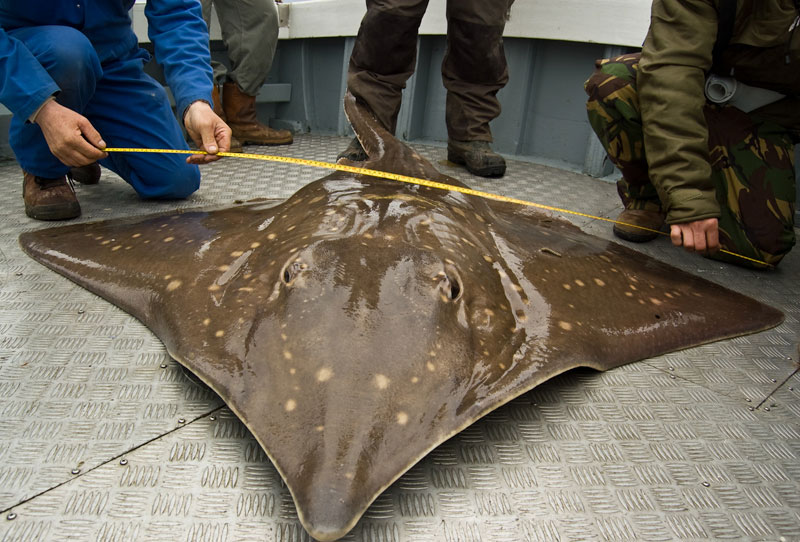 There’s massive offshore wreck potential, for big conger, ling and pollack. However, for reasons of time, given the modest top speed of the available boats, most of the distant hulks are currently not viable. A scattering of shallower inshore wrecks hold the likes of pollack, conger and big pout, but the Oban area is polluted with divers who make serious wrecking all but impossible.

Although skate are caught consistently all year, March, April and May are the best months for very large specimens, with neap tides best. Beware strong south westerly or north easterly winds which will cancel most charter trips. The standard skate fishing outfit comprises of a 50lb class rod between 6 and 7 feet long, and large 6/0-sized star drag multiplier as opposed to a lever drag. Of course, lighter tackle can be used but problems arise when one of those monster skate happens along. A butt pad and either a kidney or shoulder harness are also required. Standard end-tackle for skate is a metre of 250lb mono to a barbless 12/0 bronze O’Shaugnessy hook. 2lb of lead is normal, but more can be called for in stronger tides. Use a simple paternoster rig with smaller hooks or large Hokkais for mixed fishing. A spinning rod and fixed spool reel with 15lb line is best for pollack which respond well to leadheads with ragworm, Red Gills and jellyworms etc. 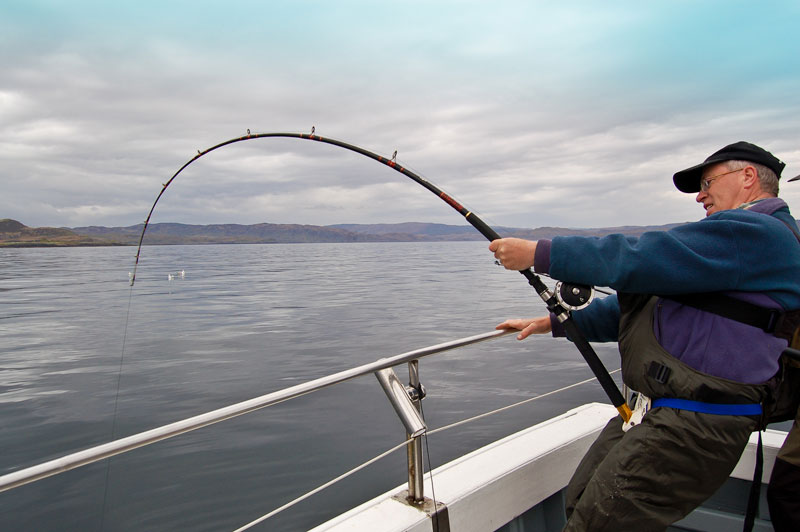 Oban fishing doesn’t require a vast array of baits… some frozen mackerel for fishing out of season when feathering fresh is not an option, a box of squid, and a few ragworms for pollack and wrasse will cover it. Fish fillets and flappers are soon ravaged by the spurdog and spotted dogfish population. Stick to whole fish baits for skate. Sections of dogfish have proven to be a tough and excellent bait, more resistant to intervention from their brethren than the likes of mackerel, coalfish and rainbow trout which are all responsible for stacks of skate. Most conger usually fall to skate baits, with smaller strip baits and fillets exploiting most toothy creatures such as spurs and rays.

Shore fishing around Oban is under explored, and there is plenty for the roving angler to pursue. Dunollie Castle rocks lie a half-mile to the north and produce pollack close in, while dogfish and thornback come from the sandier patches. The shore at Ganavan caravan park offers dogfish and rays, especially at night. Wrasse, pollack, summer mackerel, dogfish and rays feature around Easdale village, some 15 miles south of Oban.

The shores of nearby Loch Etive produce double figure spurdogs, dogs, rays, strap conger, pollack, whiting, codling, gurnard and coalies. It’s a venue that takes some getting used to as casting can be into some very deep water. On the North shore, Connel Bridge to Bonawe quarry is fishable for mainly spurdog, dogs & thornback rays, but very strong tide pushes through the bridge bottleneck and at Bonawe narrows. There is also excellent shore fishing beyond Bonawe, but access is limited and it can be a hard haul on foot.

Ferries depart from Oban to the Islands of Mull, Coll, Tiree and Colonsay.

Further accommodation information is available from the local tourist board. 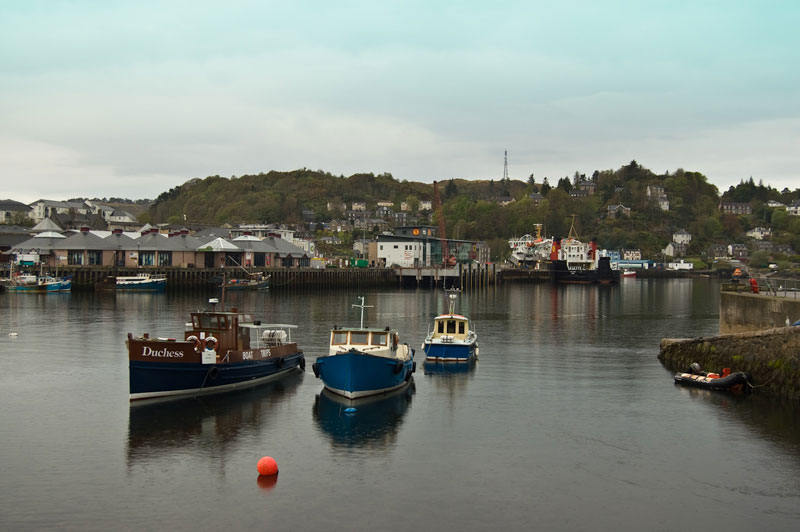 How to get there

Oban is only 2 hours by car from Glasgow and a little more from Edinburgh on the east coast. From the M8 (Glasgow), join the A82 north, which eventually becomes the A85 en route to Oban. From Edinburgh, take the M9 past Stirling, then the A84/A85 via Callander. Follow the signs for Oban when the A85 divides at Tyndrum.