During the summer months, the Isle of Man can boast some of the best species fishing found around the British Isles. Located in the Irish Sea half way between mainland UK and Ireland, measuring a mere 35miles in length and 13 miles in breadth the Island does however boast over 100 miles of attractive coastline.

The coastal waters around the Island provides a home to some spectacular wild life with countless varieties of birds, dolphins and large docile basking sharks.

2013 saw the second Manx Boat Fishing 3-Day Festival organised by keen boat angler Jamie Hincliffe. Jamie has, over the last few years, put a great deal of effort into promoting both shore and boat fishing on and around the Isle of Man, running a series of one-day competitions. Two years ago he ran a very successful 2-day event that he then decided to turn it into a 3-day boat fishing festival.

This year he has also been raising money, for the Manx Breast Cancer Support charity on the Island and thanks to sponsors coupled with a successful raffle during the Festival has raised £1,600.

The format for the festival is a two-day species hunt with a day sandwiched between them that would be a heaviest pollack competition. Each of the species days would be fished over an eight-hour period with the pollack competition fished over six hours. Boats could leave from any harbour on the Island, but one person from each of the boats had to be at the booking in point at Douglas one hour prior to the start time. 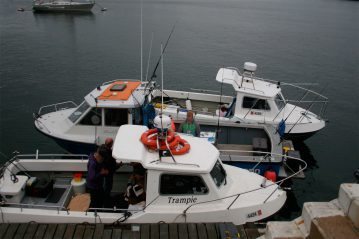 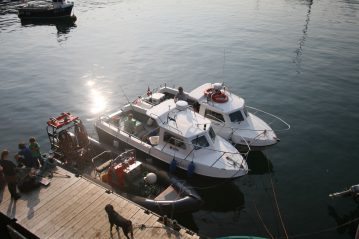 The rules for the species hunt are kept simple, all fish caught must to be 20 cms or above and have to be photographed next to a catch day card which is issued by the organisers on the day. This ensures that all non-edible fish are returned to fight another day and generally encouraging catch and release. The only fish to be kept were entrants for the heaviest fish pools, which were limited to edible species, cod, ling, pollack etc.

Manx Boat Fishing allows any size of boat take part in the festival with each boat limited to a maximum of four anglers per boat. Four rods could be fishing using a maximum of twelve hooks at any one time, allowing a whole host of different rig set-ups.

There is no restriction on baits to be used throughout the competition, but main baits used are normally mackerel, ragworm, lugworm, crab and sandeels. The most popular rigs used around the Island are three hook boom rigs and three down rigs together with sabikis, daylights and Eddystone eels on the lure front. Hook sizes vary a great deal from size 8’s all the way up to 10/0’s in some cases, with Sakuma Hooks being some of the most popular.

The morning of the first day saw the sun shining and the calm sea barely ruffled by the gentle breeze as the smell of bacon and eggs wafted across Douglas harbour. All the competitors had breakfasted and were eager to leave port at 9:30 am, aiming to get to their first fishing spot of the day for the 10 o’clock start. Jamie had hitched a ride on Falusi II that headed straight to Laxey Bay in search of thornback rays and hopefully the full set of gurnards.

However, things do not always go to plan and the boat quickly shifted to a small wreck called the Paddle Wheel to pick up pouting, poor cod and hopefully a scad. No scad were landed at this mark but Merit I did manage a codling that gave them a slender early lead. For the boats that had started at the south end of the Island from Port St Mary the fishing was steady, but fish that are normally easy to find proved elusive with only two boats catching a herring during the entire first day. 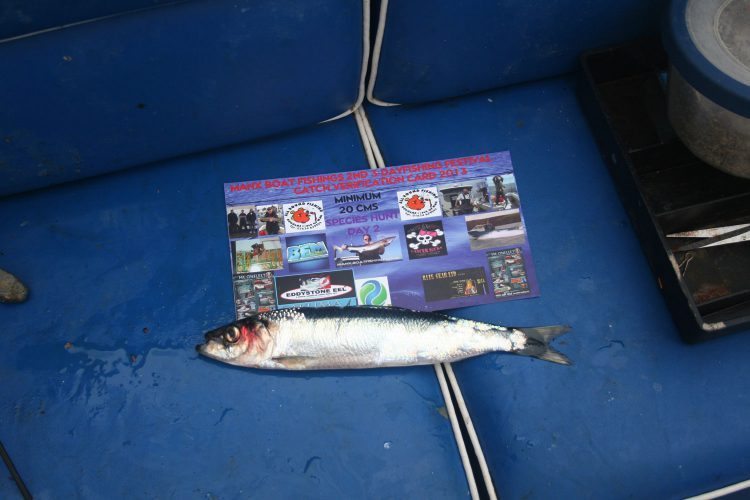 There was some great fishing though, with Michael Cowin fishing on Merit I catching a nice spurdog of around 15lb mark only to be outdone by Camron Sayle, fishing on Kingfisher II who caught and released what would have been a new Island record spur of 23lbs. Full marks to Camron for choosing to forgo the glory hunting in favour of returning the cracking fish.

Meanwhile back on Merit I while rigging up Michael Cowin thought it would be a good idea to stick the 6/0 Sakuma hook into his finger resulting in him making a trip to the A&E Unit back in Douglas. A similar fate caught out Billy Booth on TR1 but Billy being a braver, or dafter, man pulled the hook through and extracted it out himself.

Tax Rebate 1 had a nice conger eel as did Edwin Jones on Falusi 11, where organiser Jamie had a couple of very nice bull huss. The pool fish for day one of the species hunt targeted cod with ling as the backup, with all pool fish during the festival having to make the legal size limit in order to count. No records were broken on any of the three days, but on day one, the winner of the pool was E. V. GRACE with a cod of 2lb.10.625ozs, with Trampie in second place with a cod of 2lb.4.625ozs. 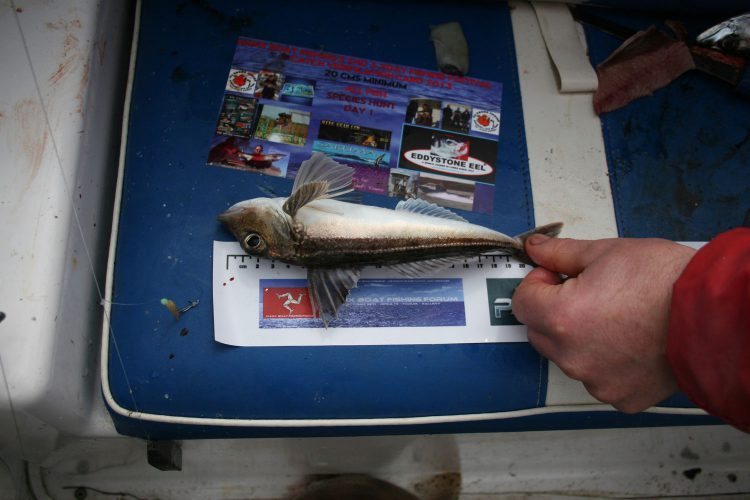 With the eight hours of fishing over for the first day at 6pm, the weigh-in on each day took place at 7pm. With the pool results sorted, it became clear who the leader after day one was, with Merit I having amassed a great score of 20 species. Kingfishers were lying second with 15 species and in joint third on 11 species were Falusi II and TR1.

The pollack competition is a comparatively short day of just six hours in which the anglers can steam to any of the numerous pollock marks that the Isle of Man has to offer and try to catch the big one. This year the competitors were fishing for a first prize of £200 donated by Paul Hardy of Moonfleet Angling. 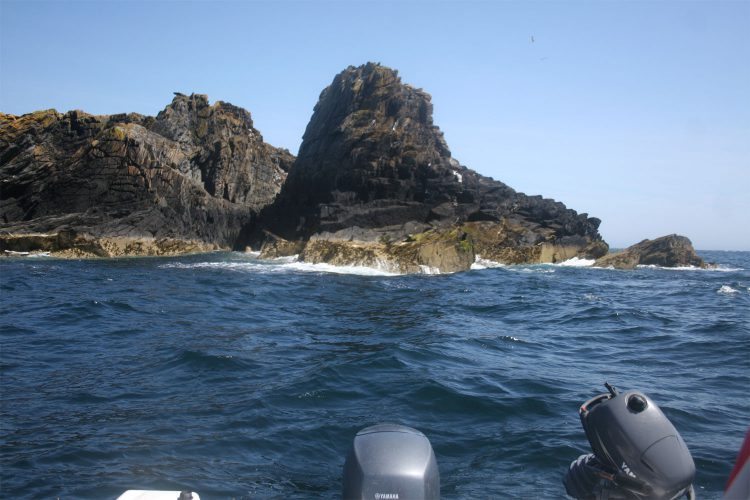 The conditions on day two were a little more bouncy than the day before but nothing was going to stop the boats from fishing around the south of the Island where the hard ground provides refuge for the quality pollack. The number one bait for this area is live sandeel, lip hooked on a Sakuma 6/0 hook and fished on a 5-6ft snood attached to a 14-inch plastic boom. This is clipped straight to the main reel line and lowered to the bottom before being slowly wound up four or five turns where the fish generally hit and a great fight on light tackle ensues.

A word of caution when fishing around most of the pollock marks, make sure that your rigs are robust as there is a great deal of rough ground that shows no mercy. Fishing on light rods is great sport when hunting pollack here but the terminal tackle does need to be robust. 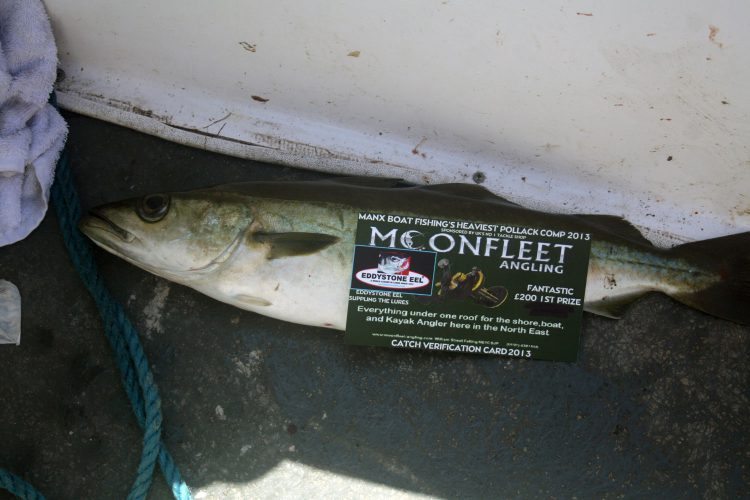 This year however, the organisers had been given some great support from the Eddystone Eel company and it was one of their bubblegum coloured lures that took second place in this competition when David Christian landed a pollock of 8lb.6.125ozs fishing off E.V.Grace. The winning fish on the day came off the leading boat in the species hunt MERIT and weighed in at 8lb.13.5ozs, caught by Skipper Gary Bridson. The days fishing had been hard with no one managing to get a fish into double figures, but there was no lack of effort from anyone in the competition.

The darkness of Sunday morning disappeared to reveal a glorious day to go fishing, no wind, flat calm sea and nothing but sunshine as far as the eye could see. The Battery pier at Douglas sprang into life as the anglers assembled to leave port for the final day and see if the current leaders could be caught. Merit I had moored down at Port St Mary saying that they may go round to the west of the Island in search of bass. Boats that had fished the south part of the Island on the first day changed tack and set of to Laxey Bay in the hope of the rays, while Falusi II, at lines down did not venture past the old toll gates on Marine Drive, Douglas, during which time a further four species were obtained. 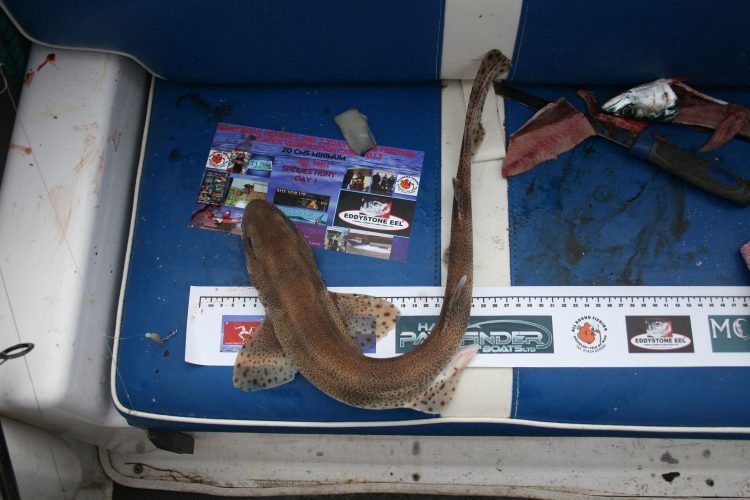 From there it was off to Jamie’s favourite tope mark barely 2 miles from Douglas harbour, where not only tope were usually found but large numbers of smoothhounds. However, Falusi II were unsuccessful here although Trampie, who were already fishing here at anchor, managed a tub gurnard. Jamie puts his lack of success at this mark down to the choice of bait as they were fishing with peeler crab rather than fish baits.

From here, Falusi II headed for the Liverpool wreck in search of a coalfish and while fishing the wreck several ling were taken including a double figure one for Jamie. E.V.Grace, although not landing as many species as they would have liked, did catch some nice fish including a nice huss for Ali McCloud. The most unusual fish of the second day was a lesser sandeel that was caught by Ben Richards on Striker.

From here, it was a further journey south to the haddock mark off Port St Mary with Merit arriving to try to improve their score. With several phone calls between boats, it was obvious that the species trophy was a battle between two boats, Merit I who were on 24 species and Falusi II with 22. After unsuccessfully trying for plaice and dragonettes at one of the Southern hot spots, Falusi II headed back to the Wart Bank. After several dabs were boated, ex-marlin world champion Edwin Jones hooked in to a plaice putting the boat within one species of their arch rival Merit I.

A very swift decision was made by Falusi II to head back to a mark just off Douglas in the hope of securing a late victory with a herring and a tub gurnard. Merit I would remain to the south chasing the elusive haddock to improve their score. 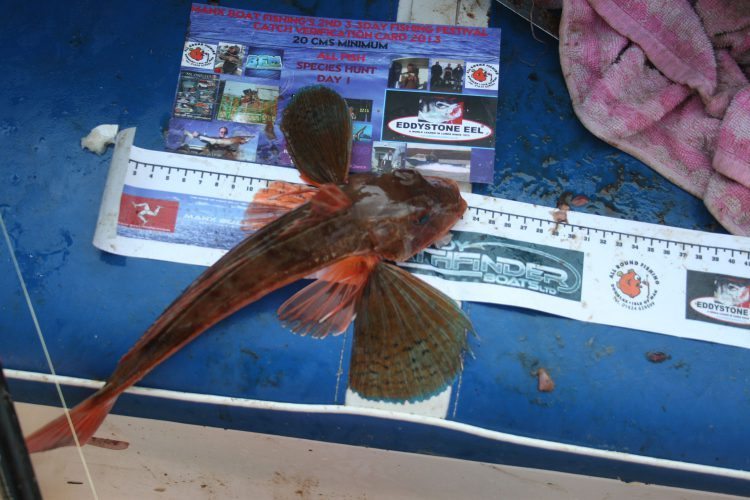 When the boats returned to port, it became apparent that other boats had not been able to put a great deal of pressure on the leaders from day one. Kingfisher II who had been lying in second place with 15 species managed to catch a further five species in the 8 hours, while last year’s winners E.V.Grace picked up a further seven species.

The battle for top dog this year in the end went to Merit I added four new species to take their overall tally to an excellent 24. The runner-up, Falusi II, finished just one species behind having enjoyed an impressive day when they added nine species to their first day total. 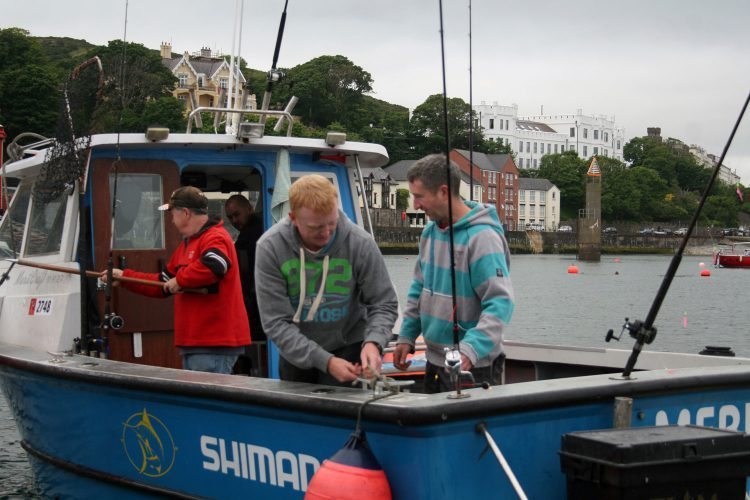 This year a new cup had been donated in honour of the late Dave Corkish, a real local character, and this cup was to be given to the best flatfish caught during the festival, this went to the boat Striker for a plaice of 14oz.

Like the most of the UK, there had been a late start to the season and the fishing over the three days was on the slow side. However during the festival, a total of 28 different species were landed, one more than last year. All of the boats and anglers that took part fished with great determination and everyone had great fun during the event that will return in 2014.

How to Cast a Spinning Reel and Catch More Fish