Nigel Hearn runs a charter boat around the Lofoten Islands in north Norway, here he reports on the 2011 season so far.

The season catapults into full swing with the annual two days of competition, music and good eating including the self styled World Cod Championships. The event is held on the last weekend of March out of Svolvaer which is situated on the south coast of Islands. 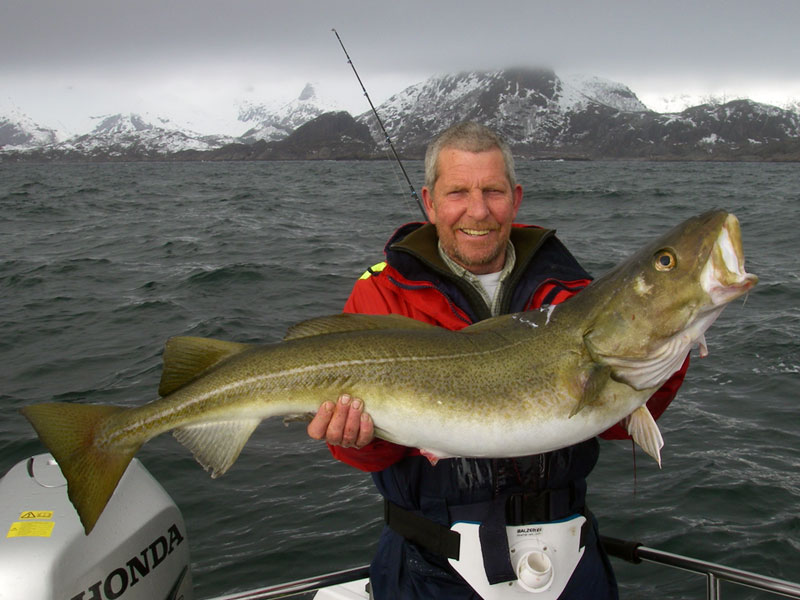 On the first day the 165 competitors were fishing for the Lofot Cup, targeting any of the species found in these northern waters. This year the top bag came from marks off the Mohlmen Light with the winner weighing in a mixed bag of 73kgs. The heaviest fish was a cod of 18.8kgs landed by Tommy Stensrud.

Entry numbers swelled on the Saturday for the main event, the VM i skreifiske or World Cod Championships, with 589 competitors taking to the 83 boats to hunt the massive Lofoten cod. Over-night huge amounts of skei (Arctic cod) arrived out on the 100 metre bank. These cod have not been seen in the area for six years, they tend to follow a ten year cycle and the cod fishing had been poor over the last few years, with a low two years ago.

The fishing was fantastic with over 100kgs needed to get into the top twelve places and the winner, Øystein Klemete, weighed in 194kgs. Over 9 tonnes of cod were landed and the heaviest single cod was captured by Bjorn Johansen, an excellent fish of 19.2kgs.

Following on from the competition, April saw huge amounts of cod arrive all over the north of Norway, from the North Cape to the Lofoten Islands. Cod were also reported in better numbers in the Oslo fjord in the south and at Stavanger in the west, where no cod have made an appearance for many years. This year has seen the best cod season over the whole of Norway since 1947. 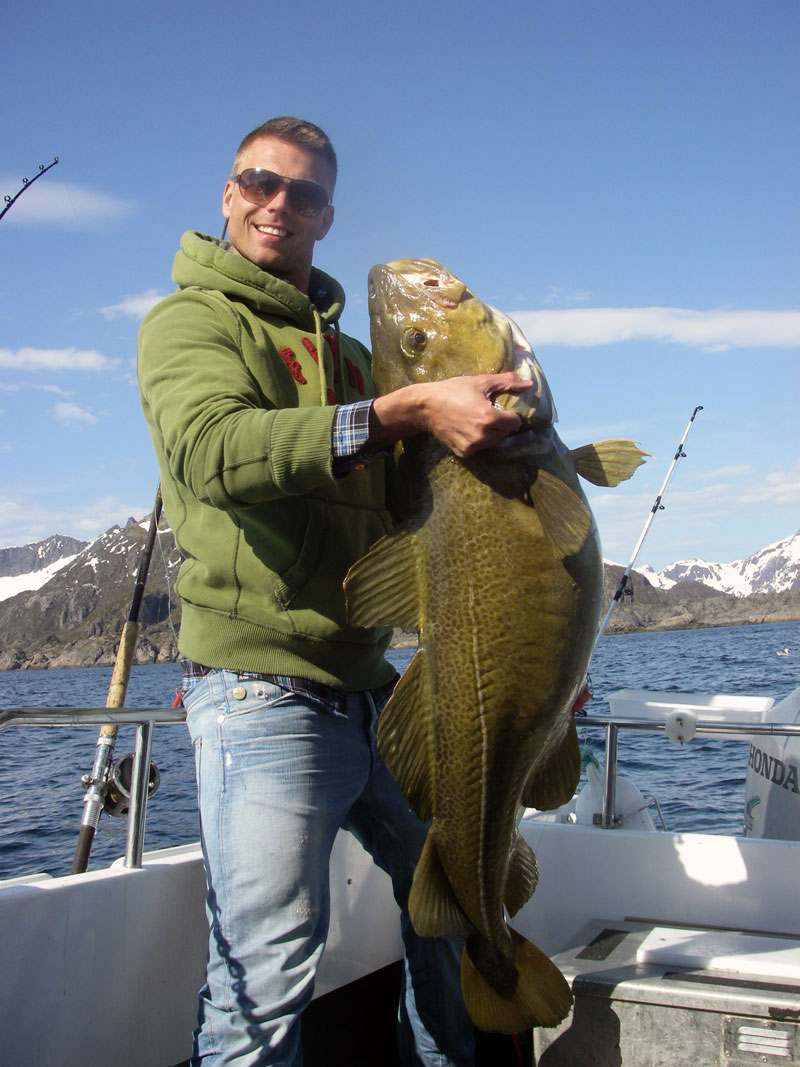 Outside Svolvaer and Kabelvag the fishing went crazy with vast amounts of cod in the 5 to 20kg bracket when fishing in depths from 70 to 100 metres. It was not uncommon for two anglers to land 300 – 400kgs of fish in a two hour session. The problem was trying to get through the smaller male fish lying on top of the shoals to reach the bigger females underneath. Dave and Lynda Spooner visiting from Bexhill had 1500kgs of fish during their six day visit, back breaking stuff. One of the solutions the couple discovered was to move away from the larger accumulations of cod and target the smaller shoals where the ratio of big fish to small was greater.

This fishing lasted right through the month of April before the Arctic moved off and attention focused on the coastal fish. With fewer fish around less fish the bigger fish were now being landed, and fish of 10 to 15kg became common place and specimens of 20kgs plus featured in the catches. A group of Swedish tourists out with Nigel on a three hour trip boated five cod over 10kg together with two crackers of 21.5kgs each. 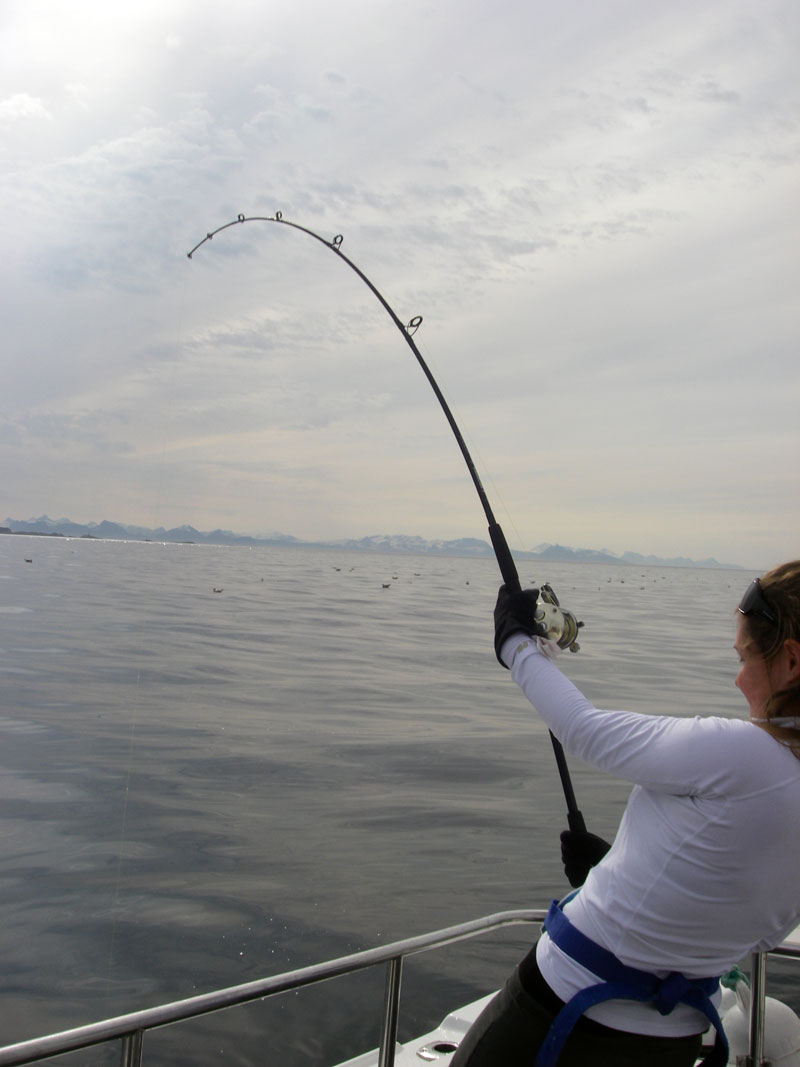 New fish arrived in late May and the excellent catches have continued throughout the month. The main fishing has been just outside Kabelvag in water up to 45 metres deep. Pirking and shads have both produced some excellent bags of quality fish during the trips. At this time of year the anglers are also targeting big coalfish at Henningsvaer, with fish averaging between 8 and 15kgs. In general evening / night fishing produces best and this is not a problem given the fact that it’s daylight 24 hours a day in the Arctic Circle just now. Going into June the cod are still around the Islands in good numbers and all fingers are crossed that the exceptional season continues.