Holyhead charter skipper, Gethyn Owen has been busy catching big smoothhounds since the middle of May. Here he reports on recent events aboard ‘My Way’.

Based on the two previous years, I fully anticipated a warm and settled April. But fate conspired to deal relentless northerly gales, which limited our early excursions to mere a handful of days. While dogfish, whiting, conger and huss were available inshore, the only early standout was Holyhead angler Paul Whittle’s 19lb 13oz spurdog, which demolished the current Welsh boat record by 11oz. 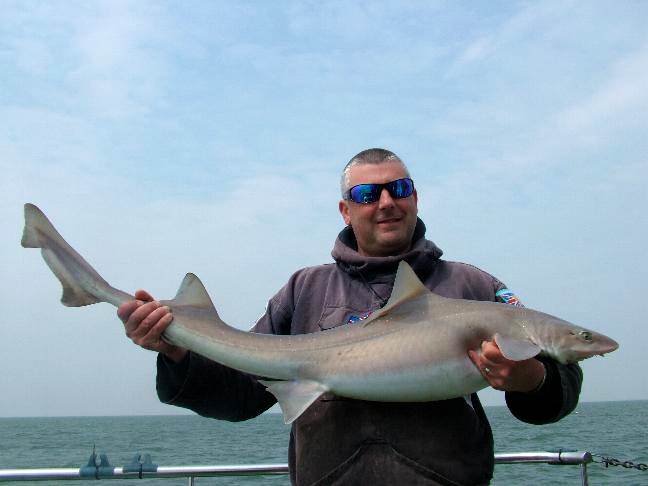 Early May was inconsistent: one day we’d locate plenty of fish, only to struggle to find any notable action at the next attempt. Fishing improved as the month wore on, with increased numbers of the usual suspects, bolstered by dabs, pollack, coalies, ballans and odd decent rays featuring when we actually got out.

During mid May we traditionally turn attentions to smoothhound. Expectations for the year ahead are high after an excellent 2007, which saw ‘My Way’ record several hundred very large fish in a frenetic five-week period. These efforts culminated in a new Welsh record starry smoothhound of 25lb 6oz.

Having rumbled a couple of good hounds two weeks into May this year, we went all-out to kick off our 2008 smoothie account with a bang the following week. A mixture of My Way regulars and novice anglers made up the crew, and all caught good hounds… the best going a whopping 18lb. Most fish were in the teens of pounds. The stamp of fish was encouraging – as good, if not better than 2007. 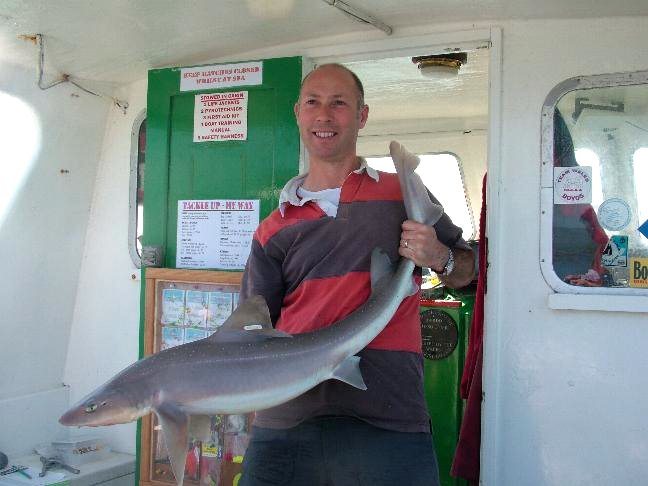 With a tally of over 250 smoothies averaging 12lb landed in the fortnight since, we are enjoying a fabulous season. One recent damp day with just a five-man crew will live long in the memory. Despite a brisk north easterly threatening cancellation, thoughts were to fish explicitly for hounds using only crab. The anglers were also guaranteed some serious fun on the types of rods they’d brought… sensor tips, a 15ft telescopic, and a 6ft jerk-bait rod!

The morning began slowly, with only the odd dogfish homing in on the fresh local peeler baits. Carl Burns’ shout of “Geronimo!” signalled the arrival of the hounds. He proceeded to play and land our first hound of 12lb. This was the start of a memorable day for Carl as he went on to smash his personal best for smoothhound no less than five times! Carl rounded the trip off with a starry hound of bang on 20lb. There were several near 20 pounders boated, but the best fish was a 25lb beauty for Welsh Boat squad member Jon Law. I should mention that my PB was a 19lb 8oz fish taken on the same trip and caught on a 15ft Grauvell Panama rod – damn hard work for sure! 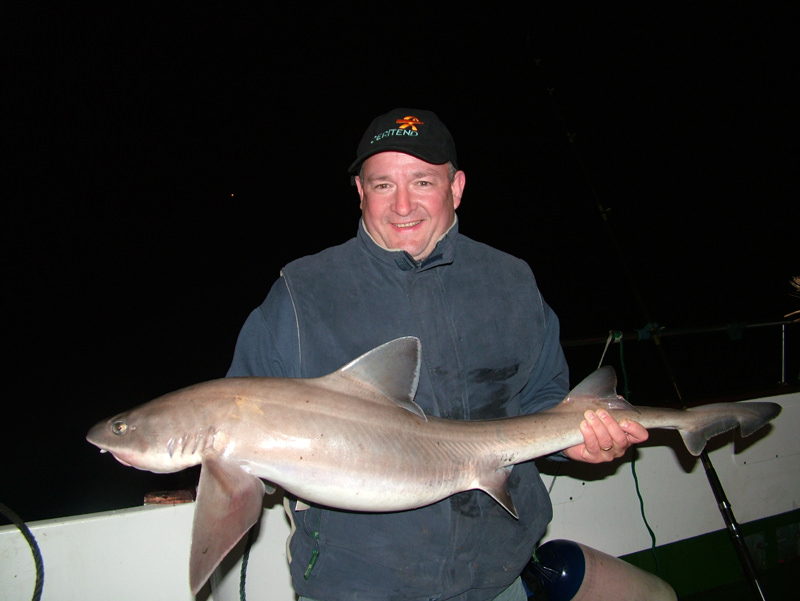 Edward Farrell, from Dublin University in Ireland joined us on My Way for two days at the end of the month. Edward is conducting one of the most concentrated studies on smoothhound in Irish and British waters. The studies include the habitats, pack sizes and the frequency of common and starry hounds in our waters.

During Edward’s stay we managed to tag and release 70 smoothhounds. Anyone who catches a tagged smoothie, please record the tag number and pass the details to Edward, or contact the Irish Inland Fisheries Board direct.

So far the study has thrown up some very interesting results. During Edwards visit in 2007 he took samples from the dorsal fins of numerous smoothhounds. Based solely on appearances, around 25% of those caught were recorded as being common hounds. However detailed genetic testing, which is infallible apparently, revealed all test samples were those of starry hounds. Thus far, all the hounds Edward has tested from our waters are starry smoothhounds, and none are commons. I for one am looking forward to reading the full study report. Appearances can indeed be deceiving then.