Since swapping his small boat for a sea kayak, Neil Turnbull has discovered new things about himself and his regular fishing venues. Kayak fishing works for him and it might well work for you too.

Why go fishing from a Kayak? It’s a question on many peoples’ lips, and one that I have no difficulty answering. I embraced the yak for reasons of freedom and simple economics. Four years ago, I was a small boat owner who faced the recurrent dilemmas of ever-rising fuel and maintenance costs, coupled with problems of restricted launching access. The financial drain aside, slipways were either closing, or getting so busy with jet skiers and the like. And I’d had enough of it all. 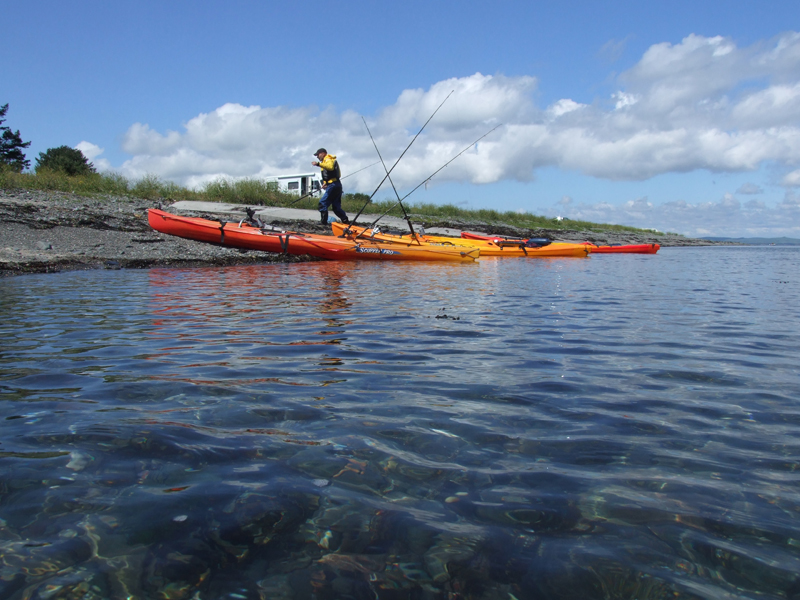 Then out of the blue I stumbled upon a magazine article on kayaks… even better, kayaks that were specifically designed for fishing. After some research, it dawned on me that this just might be the answer to my problems and prayers. No need for an expensive, gas-guzzling 4×4 to get me to the venue. Slipways? Who needs them? A kayak can be launched almost anywhere within walking distance. The more I investigated the potential, the more glaring advantages came to light. No more maintenance costs, no storage problems, no slip fees, no need for crew, no last minute letdowns, and probably most importantly in today’s environ-economic climate, no big red plastic fuel cans and no resultant pollution!

Three months later, I had sold my boat and was hooked on this new, exciting and rapidly- growing branch of sea angling… and there was nobody more surprised than me. Now, several years later, I still get comments on the beach before each launch from curious, and even worried passers-by: “You’re not going out there in that lump of plastic are you?”

I take great pleasure in showing them the equipment we carry, and demonstrating how stable these kayaks are in the water. It’s interesting to see their attitude change when returning with fish aboard. The questions and comments soon turn to: “Where can I find out more about these kayaks?”

The kayak most definitely broadened my horizons. I discovered that I could now launch at venues where there was no slipway. In my first year using the kayak I caught numerous new species not encountered previously from my boat. I was soon fishing areas that had great potential, but that were previously inaccessible with my ‘proper’ boat. The stealth aspect is a big advantage not available to boat anglers: you can quietly sneak along a tide edge, and ambush unsuspecting fish in the shallows. I also believe that I spend more time on the mark now, rather than speeding around, burning fuel and wasting valuable fishing time. 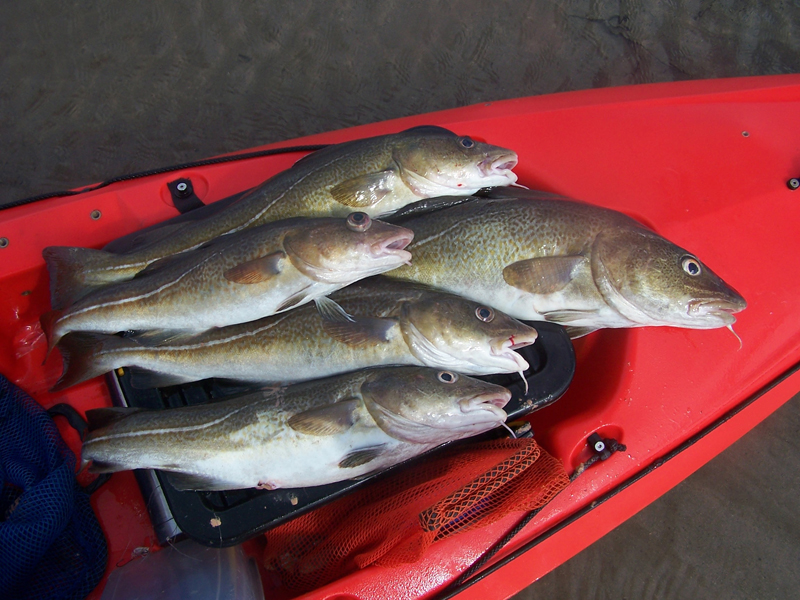 Forgive me for stating the obvious, but sitting in a kayak brings you closer to the water. But being so close makes you more aware and attuned to your surroundings. After 20 years of fishing a particular boat venue you think you know it inside out, but there is so much that you don’t find out until you have to get out there under your own steam with your backside only two inches above the sea! It’s not an ideal situation to be paddling against three knots of tide with the wind beating against you, and it’s something you soon learn to avoid. Hard as it might be to believe, during one year in my kayak I learned more about specific tidal conditions and weather effect at particular venues than I had picked up in the previous two decades from a boat. Such precise and intimate first-hand knowledge has allowed me to construct hourly tables of tidal flow for all the venues I fish. It’s incredible how this helps your catch rate: knowing which side of a reef the fish will be lying behind depending on the direction of the tide is invaluable information, for example. 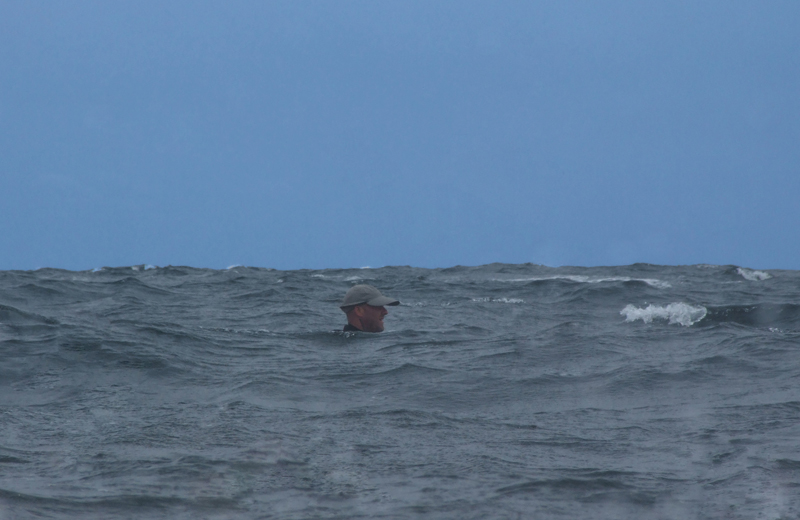 Yaks have their limitations, but these are not as numerous as you might think. Kayaks clearly don’t lend themselves to fishing long distances from the shore. Depending on the type of kayak and fishing conditions, three to four knots is a good measuring stick for an average paddle speed. Heading six or seven miles offshore would then leave you two hours from your safe haven, way too far, and near madness in my opinion. Yaks are best suited to coastal waters within a couple of miles from shore being a safe maximum. Tidal strength and wind can also be limiting factors, but with good planning these can be managed. Once you have a bit of experience under your belt, you will happily handle any sea conditions that a five-metre dinghy would put to sea in. Your limitations would then only be capped by your personal ability. 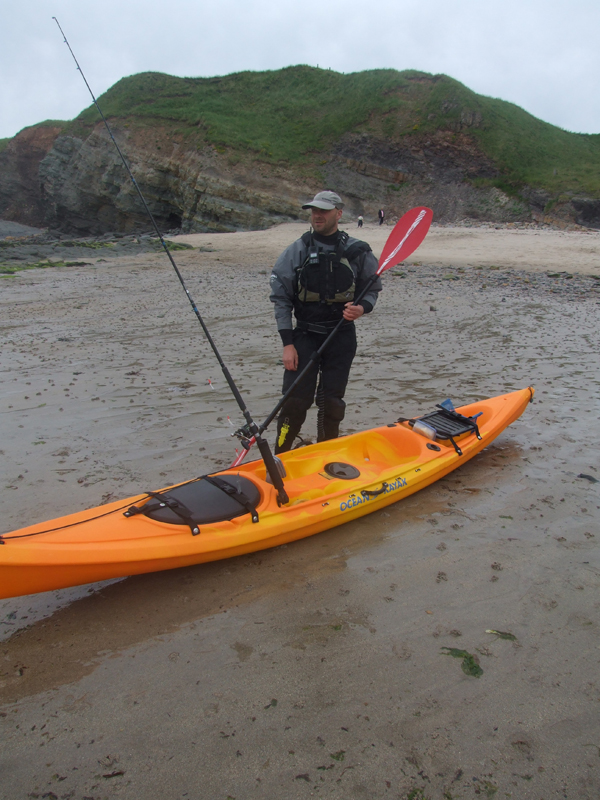 Safety is paramount on a kayak. It’s also something that kayakers take very seriously indeed. In fact, without hesitation, I would say that most spend more on their safety equipment than they do on their fishing gear.

Being so exposed to the elements you have to be permanently prepared. Full dry suit, floatation jacket, VHF radio, compass, flares and waterproofed mobile phone are just some of the items worn, and carried at all times. In addition, most kayaks are kitted out with GPS, sonar, first aid kit, deck compass and emergency lighting. Cursory mention of all of these items only skirts the issue of safety, which demands a whole separate feature, and it’s one that I hope to bring you soon.

So why fish from a kayak? For me it makes sense, for others it may not. There are certain areas of the sport that were not mentioned or written about when I first took up this pursuit. Some of these things were stumbled upon early in my first year; others have become ingrained with time. The hunter-gatherer instinct is in all of us, and that deep inner satisfaction felt having caught fish without reliance on others or any form of motorisation is difficult to describe to those that have never experienced it. An almost primeval self-reliance, a palpable connection with nature, and the ability to slow things down and turn one’s back on at least some ‘essential’ technology are all part of my personal attraction.

The facts make interesting reading, and are out there for all to see. Kayak angling is the fastest growing paddle sport in the UK, and I would predict that within a few years the sight of a sea fishing kayak will be more common than not off and along most shores.

Naughty reels get the strap