Festival Fishing in The Isle of Man

2015 saw the 4th Three Day Manx Fishing Festival which was due to take place in early July postponed due to adverse weather conditions. However organiser Jamie Hinchliffe had wisely set aside a backup date of the 9th of August for first day’s event which would comprise the “All Round Fishing” sponsored heaviest pollack, and the “Manx Fork Trucks” sponsored flatfish competition along with the heaviest fish caught on an “Eddystone Eel”.

In addition part two of the competition would take place on the 29th and 30th of August with the boats competing in the new Elas Business Support sponsored two day species hunt. The big question was would the weather be kind to the organiser and entrants for the alternative dates. 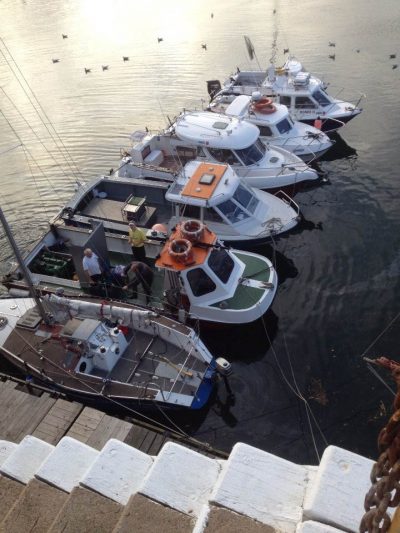 It was with reservations that the first day of the festival went ahead on August 9th, and a couple of the smaller boats taking part were hesitant about putting to sea. However the weather abated enough to allow the competition to be safely fished. This part of the Festival was of eight hours duration and boats could leave from any preferred port around the Island. After the booking in at the Battery Pier in Douglas at nine in the morning boats were permitted to leave their chosen port at 09:45 hours ready to start fishing at 10:00.

Most boats headed towards the south of the Island where the normally productive pollack and flatfish marks are located. The conditions were to say the least a bit choppy but the further south the boat ventured the calmer the seas became, “Merit I” led the way to the grounds. However not all boats headed in this direction with “Striker” leaving its home port of Ramsey in the north of the Island they decided to fish the local sandbanks in their quest to land the heaviest flat fish. “Trampie” under the captaincy of John Maddrell searched for a flattie at the back of Douglas Head but without success and soon followed the majority south. This left “Bones II”, with organiser Jamie aboard, fishing off Douglas and with perseverance a plaice was caught 100 yards off the Victoria Pier. The end of the breakwater at Douglas proved to be another good move for Jamie and crew as the quality of pollack caught here was first class with the heaviest just under the 8lb mark.

“Kingfisher II” departed out of Port St Mary at the south of the Island and with great success catching plenty of good sized pollack and lots of small flatties but none of these would trouble the scales. “Merit I” fished hard and even managed some pollack on the Eddystone Eel lures but were pipped to the lure based prize by the best fish of the day, to take one of the sponsors lures, landed by David Walls fishing on “Bones II”. 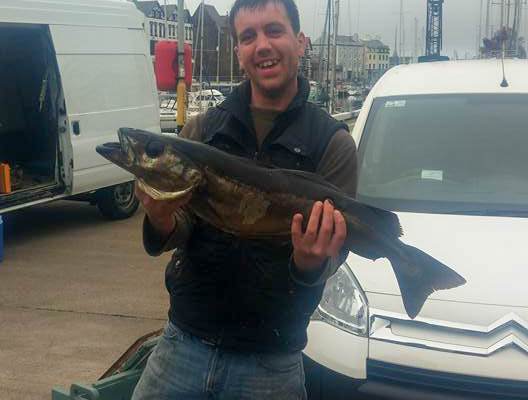 After a hard day at sea the clock ticked round to 18:00 and it was game over, back to port and the weigh-in at 19:00 on the Battery Pier. Fishing had been hard and no records had been broken but everybody had a good day with plenty of good banter.

Results of the Day’s Competition 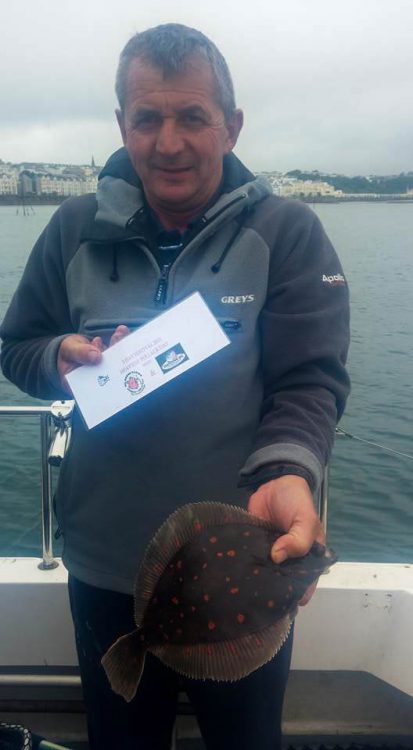 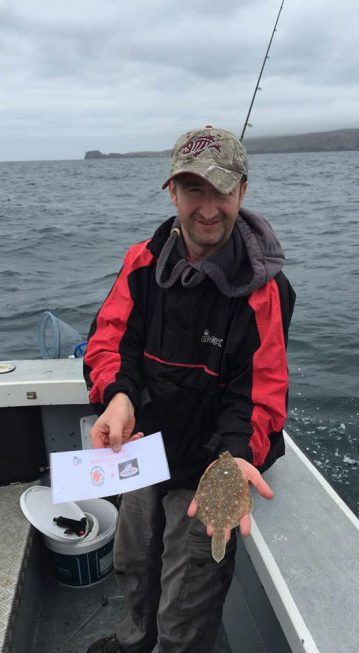 With the conclusion of the first part of the event the anglers and organiser could only hope that the weather would prove favourable for part two over the August Bank Holiday weekend.

As the second part of the Festival arrived, the weather was still very unsettled and Jamie took the decision to limit the fishing boundaries on the first day’s fishing. It was obvious from the forecast that fishing some of the normal “hot spots” would be too risky, so with that in mind a line was drawn from the point at Maughold lighthouse down to the point at Derbyhaven and no more than 1 mile out from land. This would make if fair for all the boats with nobody being able to gain any advantage. Boats set off from their preferred ports at 09:45 hours and with fishing commencing at 10:00 the battle for Species Champions 2015 would begin in earnest. 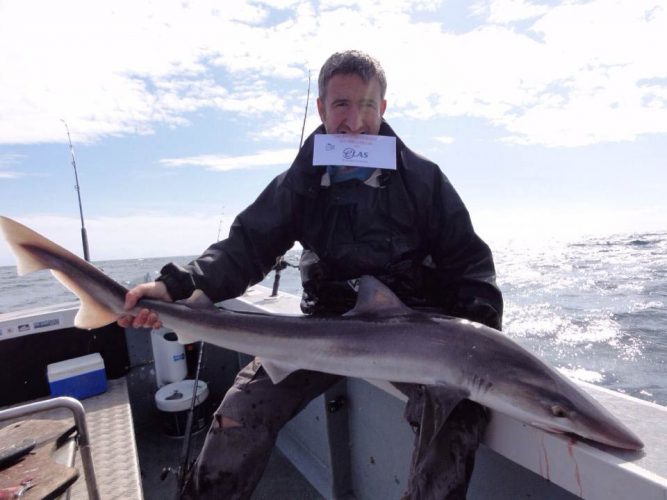 Several boats headed straight for the Port Grennaugh area which can throw up all kinds of species from black bream and ballan wrasse to double figure bull huss and conger eel along with the occasional tope. Half a mile further offshore from this area spurdogs and gurnards are plentiful.

“Bones II” however got off to a flyer by catching a plaice just off the Victoria Pier again before going out into Douglas Bay where cod and and a couple of gurnards were caught. From here they stopped off at the back of Douglas Head to top up on mackerel and launce and then headed for Port Grennaugh in search of conger.

Every boat in the competition was fishing in this area now which provided shelter from the wind, boats fished hard all day with varying degrees of success. The luckiest catch of the day was aboard the “E V Grace” where a rod rod was lost over the side only to be recovered when a subsequent drop resulted in the lost gear gear being retrieved complete with a tope attached. “Striker” was the only boat to start at the north of the Island and with good results as they went to Cranstal and landed a decent bass, before heading south to join the rest of the action stopping only at a point south of Maughhold to catch a pollack. 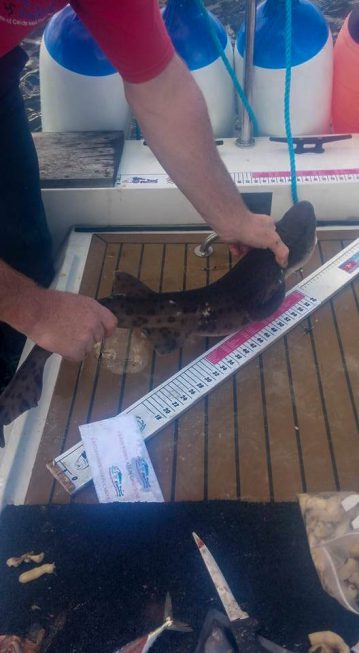 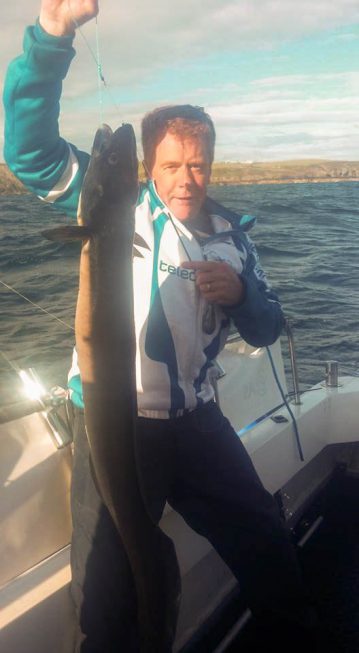 This year saw a slight change to the rules in the event of a tie, in previous years it has been decided by whoever caught the heaviest pollack in the Pollack Competition, however the combined weight of the “Pool Fish “ was used this year, with ling and cod being selected for 2015, and you could weigh either in on both days. With the day coming to a close the weather was constantly improving and would make for a thrilling second day. With lines up all boats headed back to the port of Douglas for the days weigh-in and find out who was leading at the halfway point.

Positions After Day One

The favourites to make it a hat trick of wins Merit I were in the lead by two species but with other boats close on their heels it was going to be a great battle on the second day. With the weather improving so much overnight, the boundaries could be lifted and all fishing marks would be in play, time for tea and a good night’s sleep.

Sunday morning came and the weather was perfect for the climax to this year’s Fishing Festival. All boats had gathered in Douglas and were refuelled and raring to at 09.45 hours for a concerted effort to become Manx Species Champions for 2015 and a winning cheque of £1,000 and our nice new trophy.

Boats headed out of Douglas Harbour with the clearance of the Port Authorities and were soon on their way to their first fishing spots of the day. Bones II along with Wicked Hen headed straight out to the “Paddle Wheel”, the wreckage off an old paddle boat from years ago which can hold a great variety of fish. Here the target would be poor cod and pouting with anything else a bonus, and this is a great place to top up on fresh mackerel for the day. “Wicked Hen” did manage to capture a bonus scad on this mark. 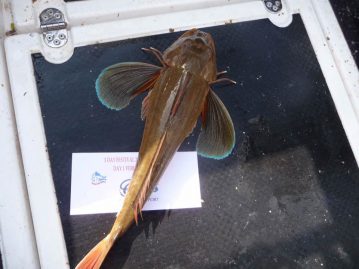 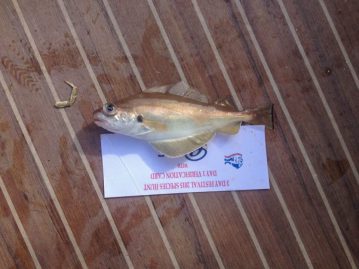 With the anticipated fish caught it was full steam ahead and with “Bones II” purring along at 30 knots it did not take long to get out to the 6-mile mark and with “Wicked Hen” in pursuit the anchor was deployed and fishing for some larger species could begin. First order of the day was to get a couple of big baits down for tope, bull huss and spurdog, also a couple of scratchy rigs for the likes of whiting and the possibility of a haddock. There is always a chance of a thornback ray out here, but they failed to show on this occasion.

From this mark it was a nine mile jaunt down to the Liverpool wreck for a coalfish and then continuing south to another haddock mark which we caught within minutes of our arrival. From there it was a 5 mile hike to the Wart Banks just off the South of the Island in search of a Dab. “Merit I” were not having the best of fishing and were finding it hard going for once. ”Wicked Hen” had made steady progress all day and with that bonus horse mackerel on the card it put them right in the mix at the top of the leader board. Another boat not having a great time of it was “Sherolyn III “who were struggling to make headway in their species tally. 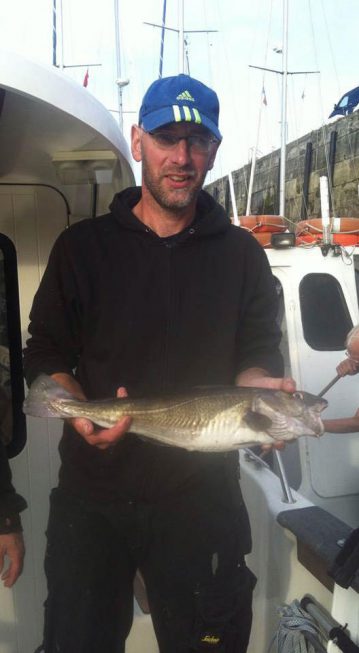 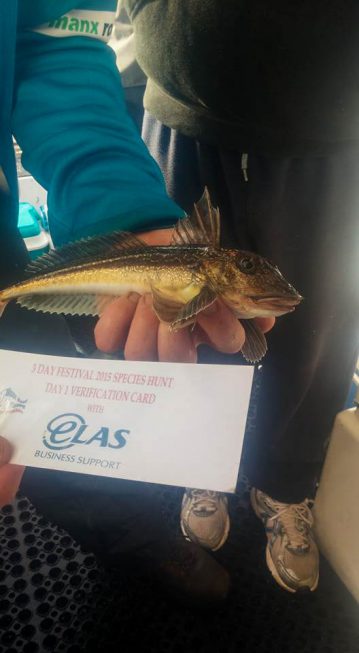 Under new ownership “EV Grace” were enjoying their first competition with us and although not up near the top they said that they really enjoyed the whole event. “Striker” and “Kingfisher II” made steady progress during the day and just missed out on the top spots. The real threat of the day came from “Trampie” who now had a crew on board who were fishing hard and pulled out a streaked gurnard caught by local stalwart Martin Lambden, a regular on “Trampie” to help pitch them up towards the leaders. Another first for “Trampie” was the capture of their first conger eel caught on “The Sheddings” mark. 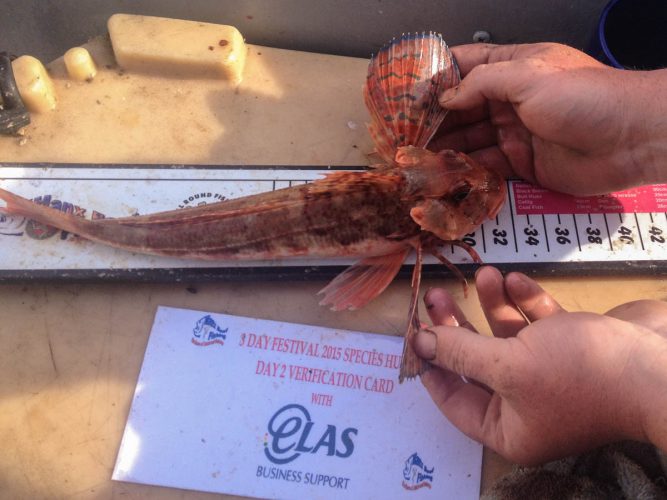 The final day’s fishing came to its conclusion at 18:00 and it was then back to Douglas to do the weigh-in and count up the species tallies to find out who would become the 2015 Manx Boat Fishing Champions. Most people had concentrated on species totals and not the pools fish so there was no real change in the pool fish results.

No records were in danger of being broken this year, but after all the bad weather that we have had here it was a great relief that the competition was able to be completed.

A total of 81 anglers fished over the three days of the Fishing Festival with 26 different species landed. Jamie passes his thanks on to the sponsors including Elas Business Support and to the “Jar Bar” in Douglas for laying on the buffet at the presentation. The Festival also benefited from the continued support of the IOM Tourist Board and the IOM Steam Packet ferry company.

Those of you wish on the mainland wish to fish the species oriented event in 2016 should contact Jamie direct for entry details. There are two ports in England that ferries sail from, operated by the Isle of Man Steam Packet, they are at Liverpool and at Heysham, near Lancaster. Jamie has a good relationship with the operators and can obtain concessions on fares and accommodation.