Well, I am pleased to say that the last of the new Clacton sea defence beaches are now open and we have 5km of beaches to fish from. The £36m project has finished slightly earlier than first thought.

More good news this week, cod is back on the menu after being taken off the endangered Marine Conservation list, the cod is showing signs of recovery after years of reduced commercial fishing. Decades of over-fishing had reduced the cod population, and the size of fish being caught, but I can now tell you by reports I have received, that over the last three years the average size of codling being caught has increased. Most fish that have been caught this year are a better average size than we have seen for many years.

I can report that all the beaches are fishing very well, with good sized codling and thornback rays being caught from most of this area.

Walton Sea Angling Club headed for the new Clacton beaches in their first evening beach match of the season. Fishing in light winds on an ebb tide they found the fish feeding from the beginning to the end of the match. Whiting, rays, dogfish and pouting were caught, with top spot going to Richard Burt with 9lb 12oz which included three thornback rays. In second place was Craig Buy 8lb 6oz and third Rob Tuck 5lb 13oz. The heaviest fish prize was shared between Richard Burt and Craig Buy with both catching thornback rays weighing 3lb 9oz. 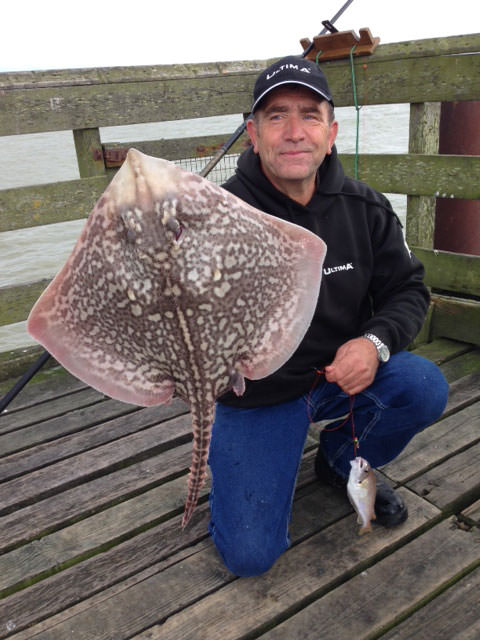 Pleasure anglers have also had reasonable catches from the Clacton and Holland beaches, once again the night tides will be fishing better, with more of those autumn whiting appearing and decent sized codling to around the 4lb mark.

Clacton Pier has also fished well on the night tides, with local angler Brian Griggs catching some nice rays after dark. My trip this week was to fish a daytime tide at the top of Walton Pier. I arrived to fish the morning flood tide with the hope of catching a late season thornback. Conditions were perfect, with an on-shore breeze and coloured water, ideal for ray fishing. The bait was calamari squid and first cast I landed a ray of 6lbs, followed shortly after by another weighing 8lbs and then another that dropped off by the pier. As the tide built the rays disappeared and the whiting came on the feed, but it was a great fishing session.

Walton Pier is also fishing quite well for codling, but conditions need to be overcast and a choppy sea for those codling to be feeding. Dogfish are still being caught after dark, squid baits are best for these, plus plenty of small whiting.

The boats this week have had the weather on their side and most have reported reasonable catches. Clacton Boat Club members Dave Hollands and Rocky Rochelle set off from the Martello beaches and headed off to beyond the wind farm, they reported cod to 6lb 10oz plus lots of very small rays which is a good sign for seasons to come. The kayaks fishing within a mile of the coast line are also reporting some good sized codling being caught.

Festival Fishing in The Isle of Man