The European Federation of Sea Anglers‘ 2016 EFSA Boat Championships were hosted by EFSA Ireland and co-hosted by Cobh Sea Angling Club at Cobh, County Cork from the 16th to the 23rd of September. The event was last held in Cobh in 2008 when it was adjudged to have been in the top 3 Championships ever. After 3 years’ preparation EFSA Ireland were delighted to welcome 16 nations represented by over 100 anglers to the event.

Anglers began to arrive early the week before for the EFSA Boat Championships and many took the opportunity to take advantage of the local skippers’ knowledge on practice sessions on the local waters.

Reports coming from the anglers and skippers were very good with lots of fish being captured. One boat had 50 conger eels in a single session. Things were looking good for the week ahead.

As always at these Championships the EFSA Executive hold their Headquarters’, Standing Committee and Annual General Meetings. These went very well throughout Friday 16th and Saturday 17th.

Championships for the next two years were confirmed as:

While the meetings progressed the competitor check-in was taking place and activity was brisk. Anglers were extremely complimentary of the welcome pack which was full of badges, fishing gear and edibles together with all the paraphernalia for the competitions.

Sunday started with the final check-in. The parade of nations was planned for 1330. The plan was to have Paddy Burns lead the parade in his vintage Rolls Royce with the nations being led by a member of the Cobh Animation group in authentic 1916 garb. The weather however did not allow this to proceed with driving rain persisting. Luckily and as also happened in 2008 the opening ceremony was moved indoors at The Commodore Hotel. The proceedings were MC’d by Councillor Claire Cullinane who introduced Cork County Mayor Seamus McGrath who extended a hearty welcome to all in attendance.

The parade of flags then took place with the ladies of the Animation group leading the flag bearers into the theatre. George McCullough, Chairman of EFSA Ireland followed with his welcome speech after which he wished everyone good fishing for the forthcoming week.

EFSA President Horst Schneider completed the welcome speeches and declared the championships open. There followed a grand evening of entertainment which included a historical oration of the circumstances that led up to the 1916 Rising, Irish Dancing and a traditional sea shanty group. All of this went down very well with those present. 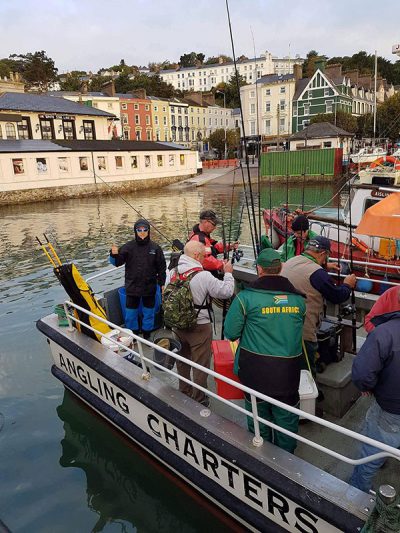 Monday morning started early for the organisers. There is always a worry that something has been forgotten! They need not have feared as everything went like clockwork. Muster stations, score boards, bait allocation and charter boat loading went like a dream. The last of the 12 licensed charter boats was away at 0815.

Bait provided was 30 king rag and 4 frozen mackerel. After a stop for fresh mackerel the fleet headed out onto the fishing grounds over ‘The Smiths’, The Daunt and the mixed ground in the area.

With final lines up at 1600 on the first day of the EFSA boat championships, the boats made for home and were all in port for 1730. Some notable fish were brought in to compete for the ‘Best Specimen’ among these was a 5,8kg bull huss for George McCullough and a 0,53kg Cuckoo Wrasse (91,7%) for Warren Doyle. More than 4,500 fish and 17 species were recorded on Day 1.

Day two started well and the boats were away by 0800. The fishing ground was moved more to the east with a lot of broken ground and a few pinnacles.

Into the Second Half of the EFSA Boat Championships

Day 3 saw the high Atlantic winds force the fleet to be confined to harbour. This saw very patchy catches being recorded, although one boat managed to capture 68 thornback rays. Top boat winner was Tony Santry 168 followed by Jean-Pierre Coutauchaud (France) and Kim Bowben (England) both on 147. Boats were won with scores as low as 47.

Heiko Dreier now led the competition from Petter Skudal, both on 300%. John Dennehy was in third spot. Best Lady on day 3 was Trude Johnsen 105 followed by Sandra O’Shea 89. The big turnaround was in the International Teams where Ireland A surrendered a 40 point lead to trail by 32 points from England A.

Day 4 started bright, fine and windless. The forecast however was for the wind to whip up to near gale force later in the day. Commodore of the fleet Donie Geary made the call to go to sea and if the wind got up to call the boats back into harbour. The wind did increase but remained in the west which allowed the boats remain anchored at sea.

The fishing was good with better than expected catches given the previous day’s storm. Top boat winner was again Tony Santry on 201 followed by Warren Doyle 192 and Heiko Dreier 189. Best Lady was Trude Johnsen 142 followed by Margaret Sweeney 92 and Pat Shortt 91.

The full results were calculated and positions of the EFSA boat championships went as follows:

Approximately 13,000 fish were recorded over the 4 days of the event. 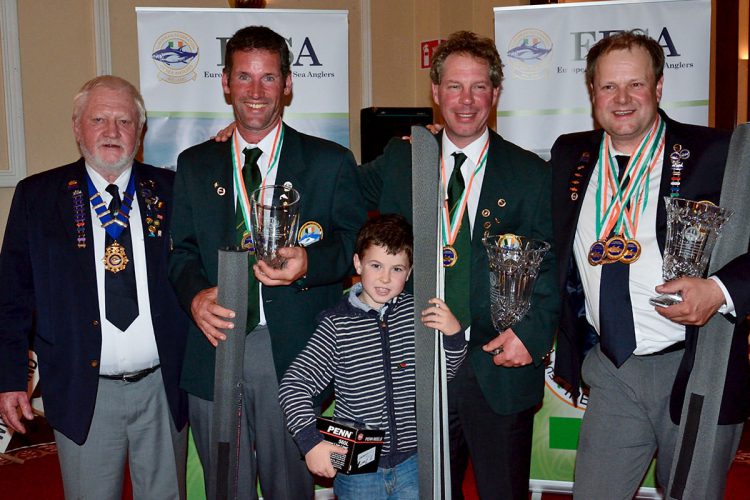 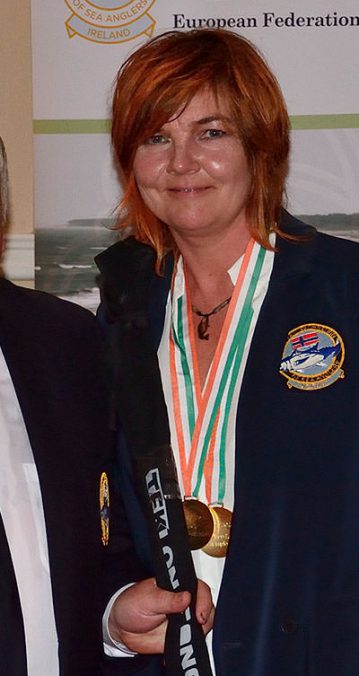 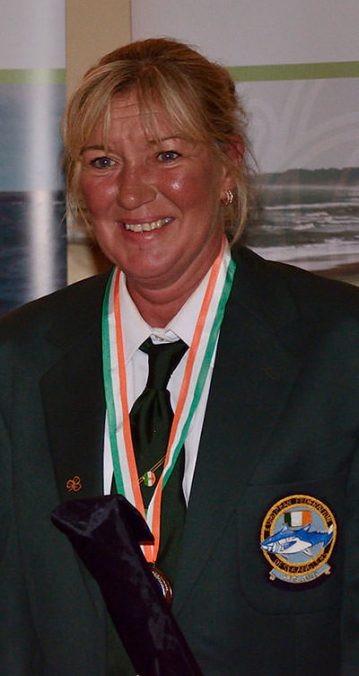 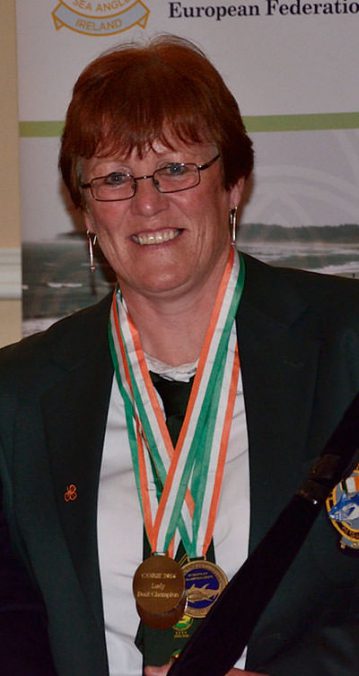 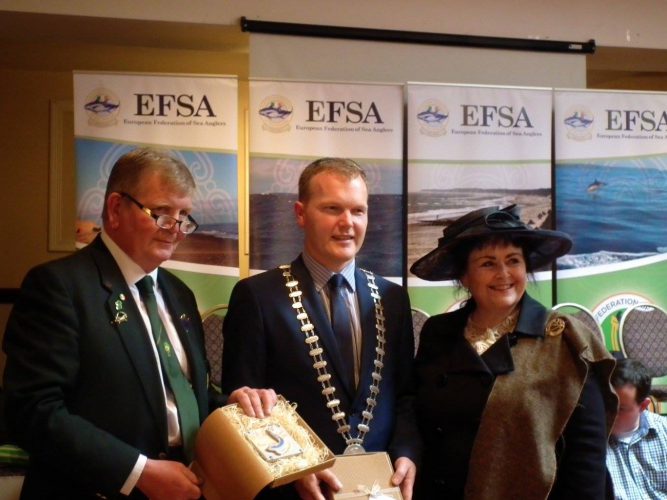 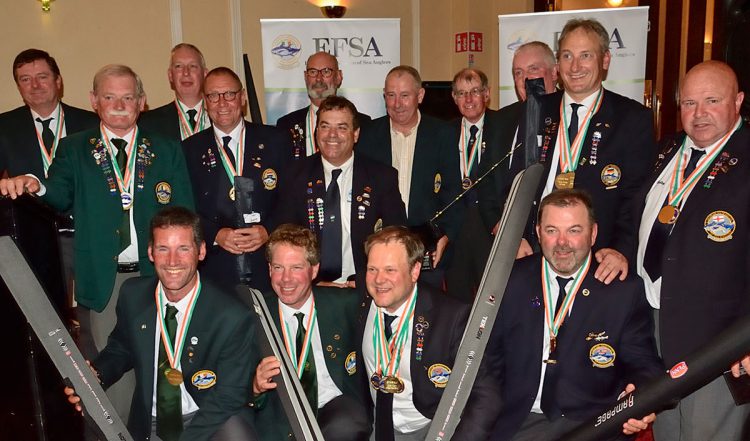 The objective is to target larger fish and for the anglers to use their skill to boat them on the light line. The score card was designed to fulfil this objective with a 50cm minimum size. The anglers assembled on Friday morning and the hope was that they would get out to target those big fish. There was little or no wind at 0630 which was promising. The decision was made to try for the outer marks.

As the last of the boats departed at 0730 the wind started to appear and rose in intensity rapidly. The decision was taken to restrict the fishing area to a 1 mile radius of Roches Point Lighthouse. A number of boats opted to try the farther reaches of the radius while others tried the area around the Harbour Rock. Some others remained inside to try their luck on the ray marks. From the radio chatter and observing boats moving around it was obvious that many were struggling to find sizeable fish.

As the day went on the wind increased further and eventually all boats retreated to the shelter of the harbour proper. Lines up were called for 1500 latest and all boats were disembarked by 1600. As expected some boats did well while others had poor catches.

The results were calculated using the standard percentage system.

The winner was Charlie Lara from Gibraltar on 145 adding the Gold Light Line Pin to the Gold Boat Pin he won in Cahirsiveen in 2004. Runner up was Gerrie Barnard on 90 from Martin Kennedy on 60 in third spot. 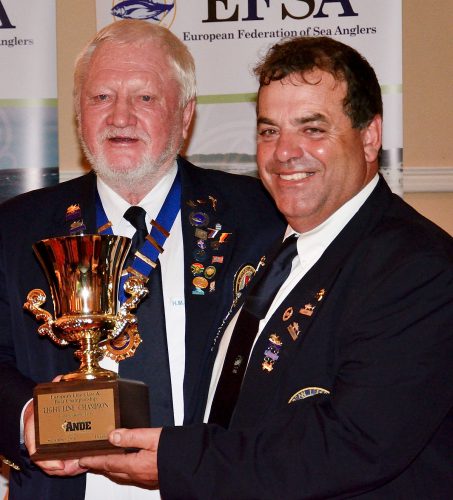 Lady’s winner was Trude Astrid Johnsen on 46 with Patricia Shortt runner up on 32 followed by Wendy Joan Strydom (South Africa) on 31.

The 2 person teams was won by Ernest Ripson and Joop Schik (Netherlands). Runners up were Martin Gierz and Keith Lowes (South Africa) and third were Wouter Van As and Jos Veelenturf. The presentation of prizes took place in The Doyle Room at The Commodore Hotel on Friday evening.

The results team worked extremely hard to get the results calculated, printed and bound for the 1930 kick off.

A fine 4 course dinner was enjoyed by those in attendance and the presentation of prizes ensued. Following the presentation the EFSA Championship Flag was passed over to EFSA Norway for the 2017 event. 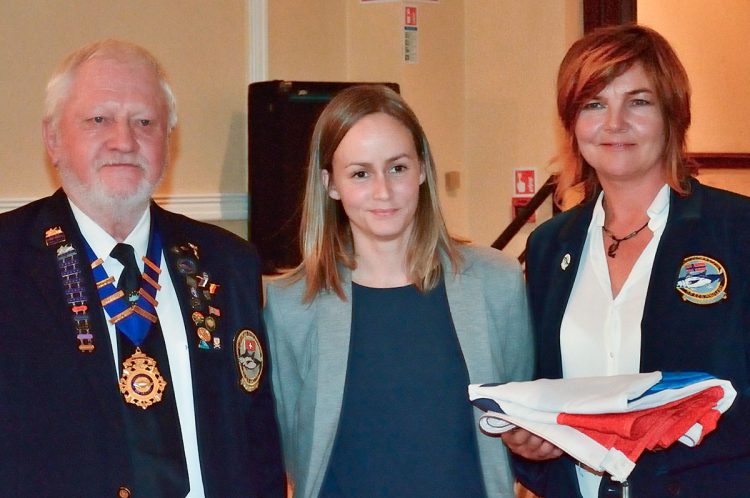 The draw for the raffle finished proceedings at the EFSA boat championships. The proceeds of which €1,000 has been donated in equal proportion to The Irish Heart Foundation and Epilepsy Ireland. Thanks to everyone who contributed.

Before closing proceedings a presentation was made to Donie and Mary Geary in appreciation for their Trojan work. The Championships were then formally closed by EFSA President Horst Schneider. This was followed by music, gaiety and revelry until the early hours.

EFSA Ireland would like to thank all of those who have supported these championships through sponsorship, advertisements in the brochure and those who worked so hard behind the scenes to make it the success that it was. In particular the bait team who kept the bait in top condition.

The event was principally supported by: 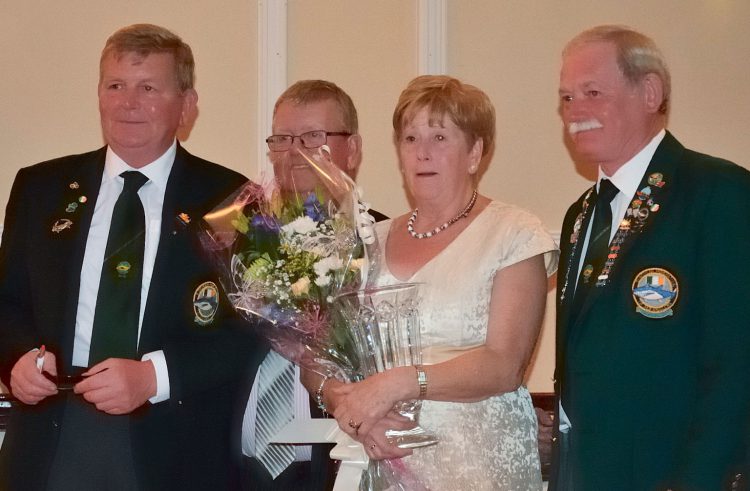