Last Sunday Fleetwood and District Angling Club had their match at Beach Road and despite poor tides and weather they found some fish.

Craig Thompson seemed to land on the best spot having a total of seven codling, two undersize and the best making 42 cm. Hughie Porter had the longest codling of 43 cm. Best bait on the day was black lug.

2nd equal – Ken Forrest with two cod and Hughie Porter with one, both 36 points

5th – Tim Wrigley one cod and one whiting 21 points

7th – Alf Ingam one whiting and one flounder 8 points

Ray Rodger reports that last Saturday he tried Five Bar Gate and caught dabs, whiting and a baby smoothhound, but no cod. All fish where caught on fresh blackworm. He also fished the Friday before at the Gynn Wall where he broke a run of blanks with four species, two plaice, one dab, one whiting and a nice eel. 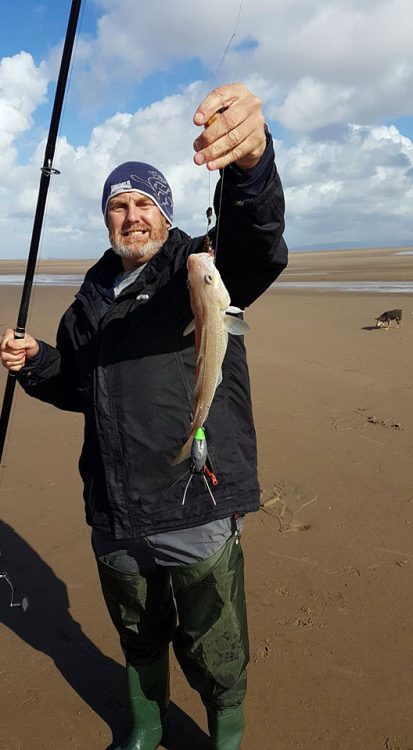 Neil Kenyon had a top couple of hours at Rossal Point with Ray Barrett and Meg Kenyon. Plenty of fish for the with codling, whiting and a dogfish. All fish where caught using fresh black worm.

Ian Mawdsley reports that he had a good afternoon last week catching a total of 11 fish in total, nine codling between31 and 37cm and two dogfish. All were returned apart from one that didn’t recover.

Last Saturday Dave Brown fished low water at Cleveleys and had half a dozen codling to 40cm. Dave said the only problem was getting through the dogfish as he had well over a dozen, bait was a few day old worm.

Anthony Ellison enjoyed a great session last Saturday at the Sea Cadets with Marcel Ellison. They fished two hours up and ne down and had codling, whiting, dogfish and dab all on black and squid from Jordan Russell Bispham Angling.

Andrew Small reports last Sunday he fished over low water, two down and two up near Norbreck. He had a bass of 4lb and his mate Bob had four codling to 2lb and two cracking plaice. The weather was dry with a 20 mph wind, good fishing in good company.