Despite the travel chaos sparked by a moody volcano, EFSA Iceland staged a successful European championship from the northern port of Dalvik. The event was dominated by Eyjafjallajökull, the troublesome volcano to South, with concern generated over getting to the venue and more again on getting home. Thankfully the competitors made it in and out, although some problems were experienced by the visitors on the return journeys with 48 hours of hell in reported in some cases.

The quality of fishing during team practices and through the event was generally excellent but the action waned in some areas as they were repeatedly pressured. The competition was fished in the mouth of Eyjafjörður with boats based in Dalvik. Eyjafjörður is the longest fiord in north central Iceland, the name, meaning ‘island fiord’ and derived from the presence of Hrisey Island (the pearl of Eyjafjörður). The surrounding area is the second most populated part of Iceland, with 24,000 inhabitants. The valley of Eyjafjörður is one of Iceland’s largest agricultural areas. And like everywhere in Iceland, fisheries and fish processing form the largest part of the local economy.

Akureyri is the main airport town airport, and is set to become the key hub of future development as tourism in the area expands. There is a need for direct flights from UK locations like Glasgow and a re-thinking over prices – for example the boats were very expensive to hire (up to €800) and alcohol was prohibitive in cost (though the local pub sold half litres of beer at £3.50 equivalent for the championship duration). Hotel costs were expensive and food choice was restricted – unless you like eating seagulls, whale and what was probably horse meat. Needless to say that many of those slumming it in self-catering accommodation lived almost exclusively on fish. Local accommodation was basic with 4 star prices being charged for 2 star facilities.

Most practice sessions for all competing nations were conducted within the Eyjafjörður; only the odd boat ventured out beyond the HrolfsSker lighthouse. These long distance ventures did not prove to be as fruitful as first thought with fishing more productive inside the Fjord where both the quantity and quantity of the fish improved. Reports from various nations’ practice sessions indicated how varied the fishing was and how dependent on the skipper’s knowledge competitors would be. It was important to learn the areas by landmarks and to contribute to discussions before any decision on the first fishing location was taken by the often clueless boat stewards. 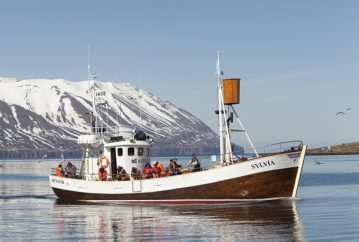 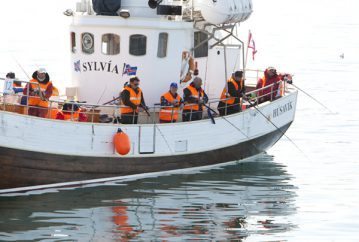 There were reports that small codling, and decent whiting and haddock were numerous over some of the marks. Other areas such as the HrolfsSker lighthouse and the Longubodi pinnacle yielded better quality cod and coalies. Nearly every deep water mark produced red fish, cod and haddock. And several deeper marks saw anglers fill up with double-shots of whiting as soon as the baits hit bottom (this is a two-hook event). Most inshore waters close to the harbour produced plentiful amounts of dabs, whiting and haddock with occasional patches of cod and wolffish located over the clean ground. There were very few reports of plaice, long rough dabs or scupins from the anglers who ventured out for the practice sessions. These proved to be the very valuable bonus fish to catch during the competition.

The pre-event practice sessions proved invaluable, providing the basis of team fishing plans. It was also apparent from the practice that specifically targeting wolf fish wasn’t the best plan of attack as they were haphazardly coming to all sorts of different rigs. Bait selection and the ability to decipher and react to a wolf bite was more important.

Most anglers began with one up/one down rigs. The most successful anglers were tackled up with light tackle, match tips and fairly basic rigs. I found the superb Daiwa Alltider rod with its interchangeable tips and the bomb-proof Saltist 30 reel ideal. Some Icelandic anglers foolishly opted for the butt pad, harness and broom handle approach. A successful ploy was to try and catch as many species as possible in the first 30 minutes then bulk up on quantity; then repeat the process at the next mark. The surprising thing about this competition and venue was the amount of undersized cod that were around; it took the eventual winner twenty-nine cod to get two in size on the first day. There were also plagues of undersized coalies and haddock in most areas. 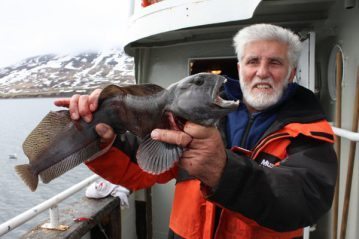 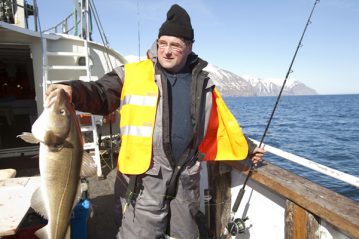 It quickly became clear that some skippers knew the venue better than others, with the bulk of the fleet made up of whale-watching operators who hadn’t fished the area for years. All that competitors could do was to catch what species were available and try to win boats as often as possible.

Over the course of the week, because of the species-based points system, there was the odd upset with a fluky species or two helping win boats even though the angler didn’t catch the most fish. This could have happened to anyone no matter how good an angler they were. This rogue luck did tend to balance out over the four-day piece however. Overall the top anglers were the anglers who consistently landed the most fish on their boats to maintain boat wins or high percentages.

The main competition was close with very little separating the top three rods. Scott Gibson won the event with three boat wins and a 96.5%. Ray Barron from England was second, just 0.55 of a percentage point behind Scott,  while Ireland’s steady Heiko Drier was third. 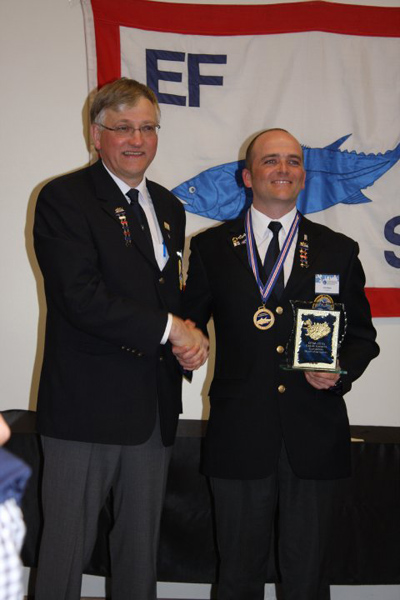 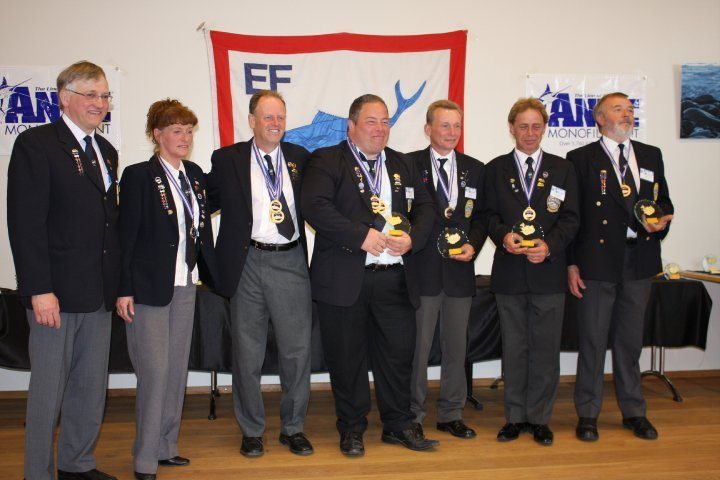 This was a successfully organised event by and large. Conditions were cold but calm except for Thursday when some boats did not venture to the outer fiord due to rough seas and high winds. 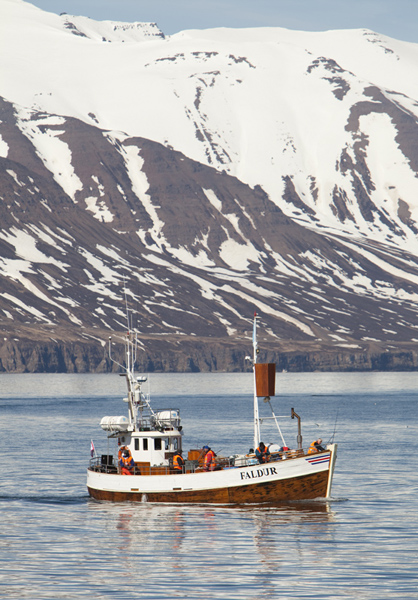 At the end of the week came the light line day which is a separate competition where only a single hook is permitted. There was excellent sport from coalfish and jumbo haddock. A number of the anglers fished all day with simple a flowing trace either baited with bluey or a rubber worm.

There were 13 different species caught during the Championship and generally the points system meant that the anglers needed to catch six or seven species to score well.  Fish were of generally good quality; coalfish in particular running up to about 10 or 11 lbs (best 4.92 kg). Dabs, rough dabs and plaice were all good sizes (best 1kg, 0.42kg and 2.23kg respectively).

The largest plaice was landed by England’s Colin Searles and is to be ratified as a new Icelandic record. Cod were prolific but the largest went only 11kg. Sea scorpions to 0.460kg and a single thornback ray of 0.860kg were taken. The biggest wolf fish of the competition was 6.6kg. Redfish were encountered in the deeper water on baited pirks. Haddock and whiting were present on certain marks, with haddock running to 2.365kg and some specimen whiting recorded up to 1.590kg.A single tusk of 1.285kg and a single ling of 1.005kg were landed. No halibut were caught. 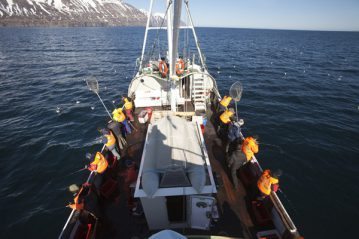 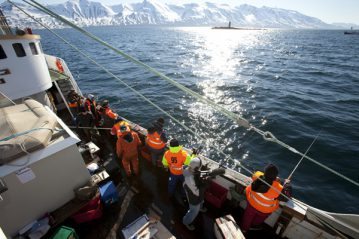 All fish were killed as required by Icelandic fishery laws… the fish are counted towards the quota for the catching vessel. Daily landings varied from 3 tons to 8.5 tons among the fleet. 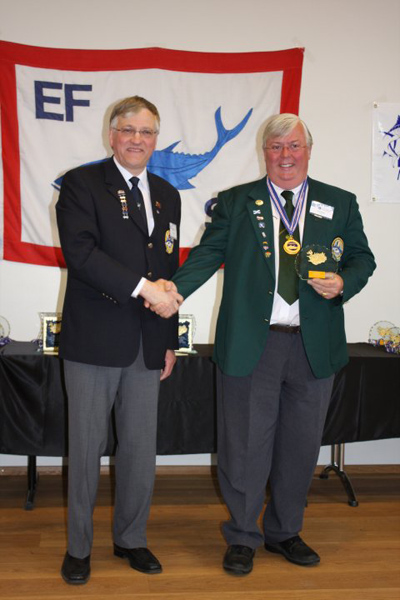 Roy Shipway (Ireland) won this with 64 fish and 423 points, beating Ken Smith of England. Joe Gough of Ireland was third. 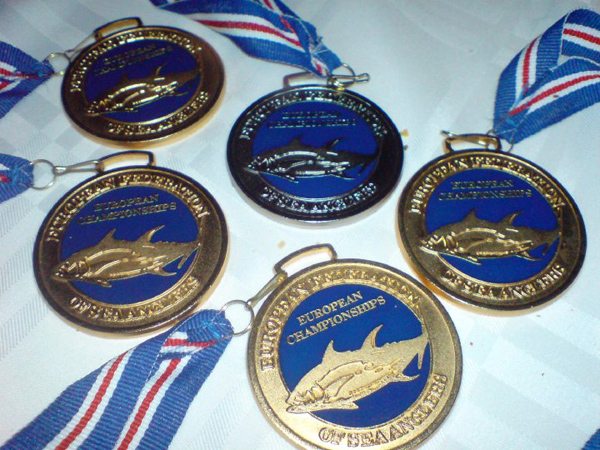 Thanks to the competitors Facebook pages for the photos and to EFSA Iceland for allowing photos from their website to be used.