“Time for a change of scenery”, muttered my pal Conor as we plotted our next weekend shore fishing session. I had a good idea what he was leading up to as late April to mid May heralds the arrival of the Twaite Shad and rarer Allis Shad into the Barrow river system… and I too was considering targeting them. 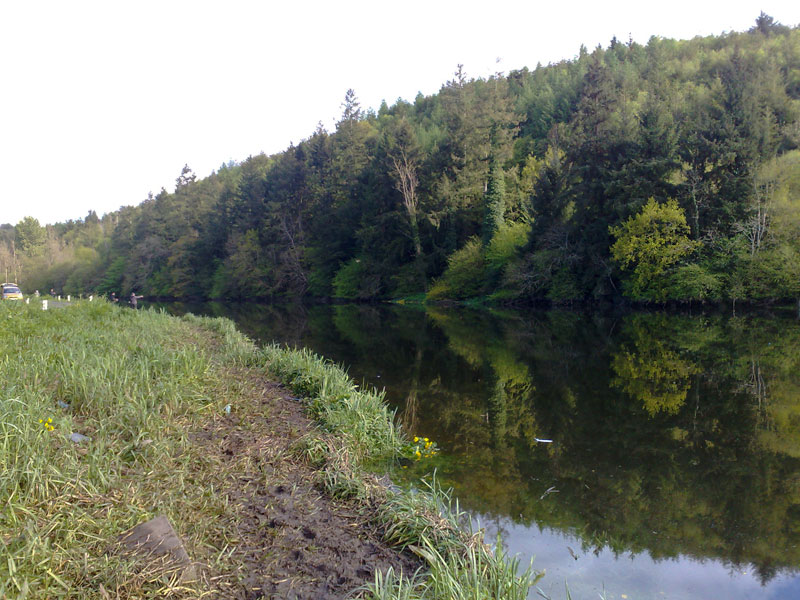 The Barrow is one of the three rivers that feed the productive Waterford Estuary. The shads, which were once numerous throughout the southern rivers, now mark the Barrow as their final stronghold due to commercial fishing pressure. There is some hope that the current drift netting ban for salmon will have a positive impact of the likewise migratory shad stocks in future years however. Like the salmon the Twaite shad spends most of its life at sea; only returning to the rivers of their birth to spawn. Hatchling shad eventually emerge from the upland gravely river stretches to reside in the respective estuaries for twelve months or so before heading out to sea to continue their life cycle. Little is known about their habits beyond this point, and they remain fish shrouded in much mystery.

St Mullins in County Carlow is considered Ireland’s Twaite shad Mecca, and every year it attracts hundreds of anglers from the country over to try and catch one of these sparkling, silver beauties. The river Barrow scours out a lovely deep valley through the village and such beautiful surroundings are part and parcel of the Irish shad appeal.

St Mullins is over 40km from the sea but the river still tidal this far inland. And getting the tides right is crucial to a successful shad session. Shad can be caught at sea, and they are indeed considered marine species… but here we are deep in the heart of river country. Flounder also venture this far up the river and are not an uncommon by-catch on the lures used to target the shad. Brown trout are also caught here and there’s bream, rudd and dace for course anglers… a positively strange concoction of species in anyone’s book.

The first big spring tide at the beginning of May usually triggers the arrival of the shad. But oddly this year, despite a vicious winter, they were early arrivals in the river system and in good numbers too. Our shad sortie coincided with the second set of spring tides in May. 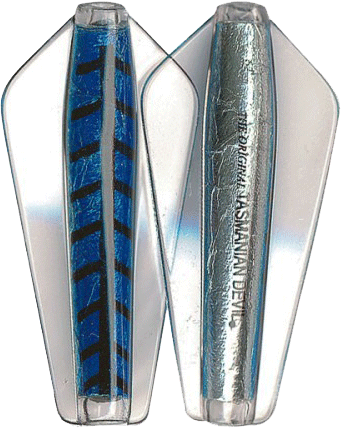 Tackle for shad is simplicity itself. I opted for a 4000-sized Abu Cardinal spinning reel carrying 6lb maxima chameleon, and an eleven foot Abu Premium Spin rod capable of tossing a 12gr lure about 40 yards or so. At the business end it’s widely recognised that there is only one lure to use and that’s the excellent Tasmanian Devil. The consensus seems to be that blue and silver are the best colours, though I’ve seen a change to brighter, gaudier colours in tough conditions get immediate results. Shad don’t actively feed once they enter the river systems; they like much salmon once their spawning head is on, and it’s merely a instinctive display of aggression that anglers need to take tap.

After leaving Dublin around 2 o’clock on a gorgeous afternoon, we headed to a mark at Carlow. A lack of rain and perfect tides made for a positive frame of mind. We spent 90 minutes on the motorway before hitting the back roads that we hoped would take us to where we wanted to be. Call me daft but I choose switch off annoying Sat Nav woman, opting instead to trust to my own directional sense to navigate the maze of little roads. Needless to say that proved a mistake that cost 15 minutes, and we had to turn the bloody woman back on again for a bit of help.

There were already a number of anglers dotted along the river bank when we turned up. Waders and jacket were swiftly thrown on, and we made our way down to our location of choice with little in the way of tackle to burden us. Conditions were better than good… the water was gin clear and the ridge of high pressure meant it was almost windless.

As so often is the case no one had bothered to tell the fish that the conditions were perfect, and quick conversations with those anglers we passed revealed a severe lack of them. Bags of forty fish or more were landed the previous week by all accounts… but just not today. Our enthusiasm was soon dented and we wondered if the main run of fish had passed us by. Thirty minutes elapsed, and the tide had barely begun to creep up the bank, when the first fish of the day came to an angler just down-river. This was clearly a decent fish, but as it was drawn towards the net disaster struck and it threw the hook. Such occurrences are common with shad as they have mouths of steel and getting a good penetrative hook-hold can be difficult. Additionally they are like mini tarpon… tremendously acrobatic with spectacular aerial antics sure to test any hook-up. One quick jump out of the water and your hook can be shaken off before you can yell “Twaite!” or a very similar word! Indeed, it is generally accepted that more shad will lost than successfully banked. 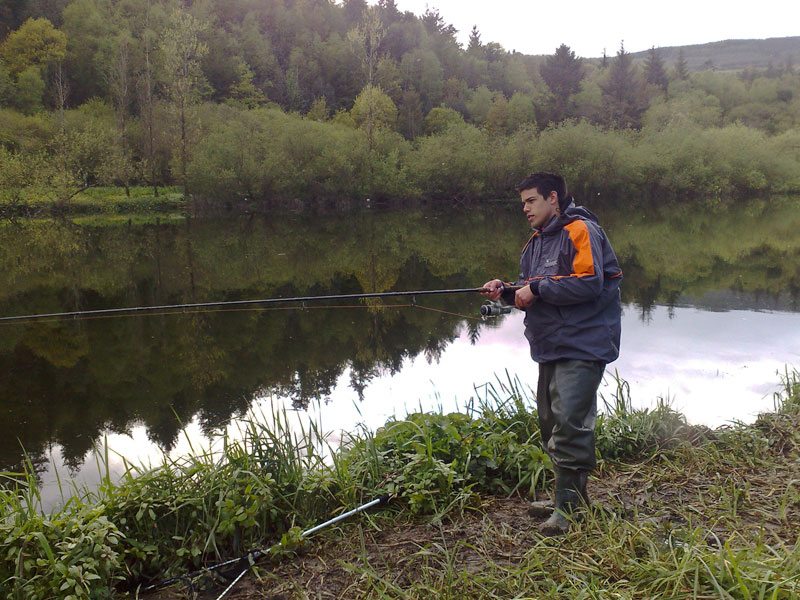 Conor and I were struggling to find any sort of action. Rising brown trout were busily taking flies on the surface when my devil received such a clobbering wallop that I almost dropped the rod. Such a ferocious take resulted in a good firm connection, and I played the fish confident that the hook was well bedded. It fought well and craftily hung in the flow for a time before I eventually managed to get its head up and steering towards the net.

Not being river folks our repeatedly pathetic, if not farcical attempts to net the fish with a ‘toy’ net ended in shattered dreams. Given our hysterical efforts I am actually surprised how the shad didn’t fling the hook earlier. It is only fair that I blame Conor whose final attempt to slide the fish into the net effectively unhooked it, and I watched in almost horrible slow motion my first shad of the session swim lethargically away. 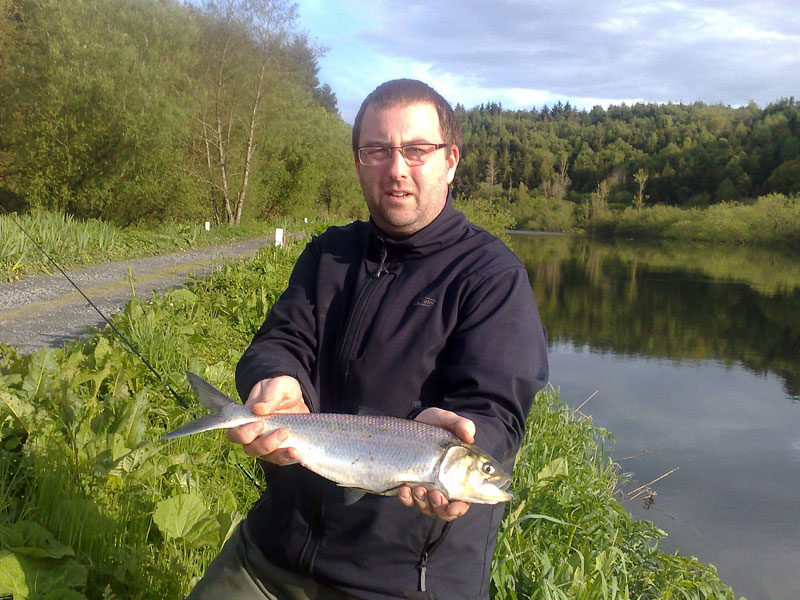 Another violent take saw Conor engaging what again looked a good fish. A short fight ensued and this one didn’t get away. The net and netter did their jobs well enough this time and perfectly formed shad was deposited on the grass for us to marvel at. They really are stunning fish, almost like a giant herring, with iridescent scales of shimmering silver and shades of purple and gold.

Conor slipped it back after shooting a few quick photographs and it was good to see it swim strongly away. Despite appearing powerful creatures, shad can be very spent after the tussle and it is important to handle them delicately. To ensure survival, hold them in the current for a few moments before gently letting them go under their own steam.

With the tide rising quickly we moved to another spot nearby which typically fishes better towards high water. My first cast here was hit twice by marauding shad but I failed to make good a connection, while Conor suffered a similar ordeal. It is fair to say that shad can be a most frustrating adversary. Very few fish were being caught by the other anglers around us
in what was shaping up to be a fairly indifferent day all round. Just as Conor was commenting “Maybe we should try a change of colour”, his rod bent over for the second time as a better fish took the lure right under his feet. A short but frantic fight ended with the fish safely in the net.

With bubbly Conor now two fish to the good, I couldn’t help but feel that this was not going to be my day. The action had completely fallen away and some of the other anglers packed up and left. We were considering doing the same when… WHAM! The high speed hit-and-run take saw the fish hooked hard. Given the previous anticlimax I gingerly played it to the edge where the dubious net sat ready to ruin. Of course it wouldn’t be fishing without drama and calamity, so need I say that once again the crap net again bit me on the backside. After a little leap clear of the water another shad with my name on it got away.

That escape marked the end of our annual jaunt to St Mullins. On the back of a rather hard lesson, and at risk of stating the all too obvious, a note to self read: “I must invest in a proper net”. I was of course disappointed, but at the very least, those few fish that did play ball served to underline that this whole shad lark is a very achievable proposition and not chasing shadows as some might think.