Last Sunday the HCA final winter league match of the season was called off due to a poor forecast and this has been re-arranged for Sunday 6th. 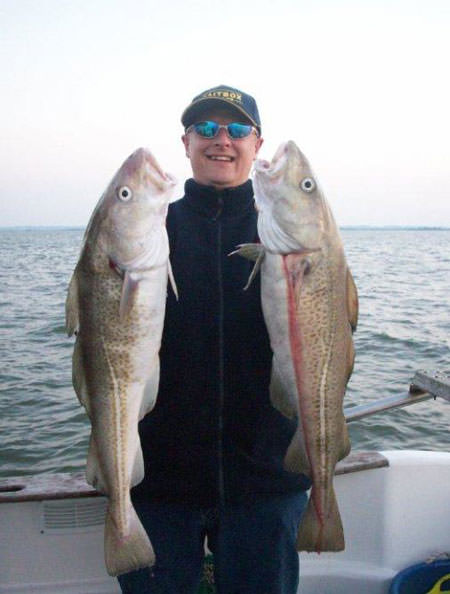 The shorter four hour match restricts how far boats can travel and areas will be restricted due to the duration of the match being fished over low water. As usual smoothhounds will not be counted.

Tim Burgess went out over high water on Wednesday and he had hounds but also two cod which are fantastic specimens, especially this time of year. Many of the local anglers either go down to Skegness for the summer with their boats or just do not bother. They do not know what they are missing; the sport can actually be more frantic than in the winter months.

The bass are finally arriving in numbers and are being caught on a regular basis by beach anglers as far as Barton. The hounds are also showing and are tremendous sport on light tackle. The tope should also be putting in an appearance shortly and hooking one of these hefty speed merchants will give the angler something to remember. The cod will remain during the summer months although hungry crabs make it difficult to ensure that bait is presented for more than a few minutes.

On the beach Humber SAC were at Killingholme last Saturday. Killingholme for years has been a brilliant venue but only certain areas are fishable due to silting and work to the creek and jetties. Those anglers who found sufficient depth of water certainly had a good evening. Sixteen members fished from 6pm till 10pm and Adie Cooper had a fantastic thirty fish for 7lb 6¼oz his rod never stopped going all night and it proved to be a hectic night. Second placed Geoff Hill landed twenty-three fish for 5lb ¾oz ahead of third placed Simon Drayton who had fifteen fish for 4lb 12oz. The club has a new junior member, D. Dunham, and he had 2½lb to lift the junior prize.

The club’s next match is this Sunday and will be fished at Humber Creek from 12 to 4pm; meet at the car park at 10.45am.

Some nice bass coming off Bohemia point near Mablethorpe. Chris Mack taking a rest from carp bashing on the commercials had two nice fish last Sunday morning. These fish are generally being caught by angler after the hounds. The calmer seas should signal a better weekend and improve the chances of catching the hounds.