I have been fishing for a long time. In that time I have crossed off many species on my bucket list and on a recent trip with Mad Shark Charters I was able to remove another one. I know this may not sound like a big thing to anglers in the UK, but I finally caught a ray; a stingray to be exact.

I was fishing the south coastal region of Georgia with Mad Shark Charters which is based in the town of Darien. The snow, cold and rough waters of the New England coast drove me south to a warmer climate, or so I hoped. It was the beginning March and while the temperatures were in the 30oF range in the north, when I landed in south Georgia they were a balmy 70 degrees. Now you see why I headed south.

I got down there on a Wednesday and I called Captain Dave Hust of Mad Shark Charters. He told me the conditions were right for sharks, red drum (redfish), black drum and whiting. With this good news I booked my trip for the upcoming Sunday. Then it happened., the barometer dropped and so did the temperatures. In less than 24 hours the temperature dropped 20 degrees starting on Thursday. Friday morning found the temperatures in the high 30s and it never warmed up. Capt. Hust gave me the opportunity to cancel, but I wanted to fish so the trip was on. 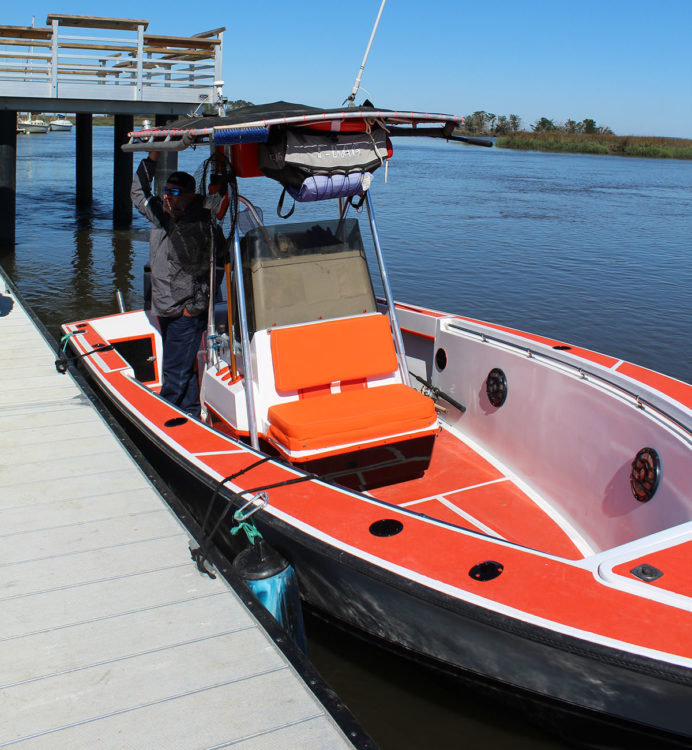 Mad Shark Charters at the dock

When I arrived at the dock the sky was blue and the sun was shining, which gave me some sense of hope. Despite the sun, there was a stiff wind blowing. I met up with Capt. Hust where I was informed that we would be sticking to the harbor area and the numerous inlets around the coastal islands due to the heavy seas further out. On this day the seas were running eight to 10 feet, which wouldn’t be fun for anyone. I was also informed that the fishing was going to be tough due to the water temperatures and the strong current, but we would give it a try. Shark bites may be almost non-existent as prime shark waters are in the 65oF range. Today the waters weren’t even close.

Tackle For The Day

On this day we would be using two different sets of gear; one for the redfish and black drum, and one for the sharks. The redfish rig consisted of a medium to medium-heavy spinning rod coupled with a spinning reel spooled with 20 pound test braided line. At the end of the line was tied a 3/0 circle hook baited with shrimp. 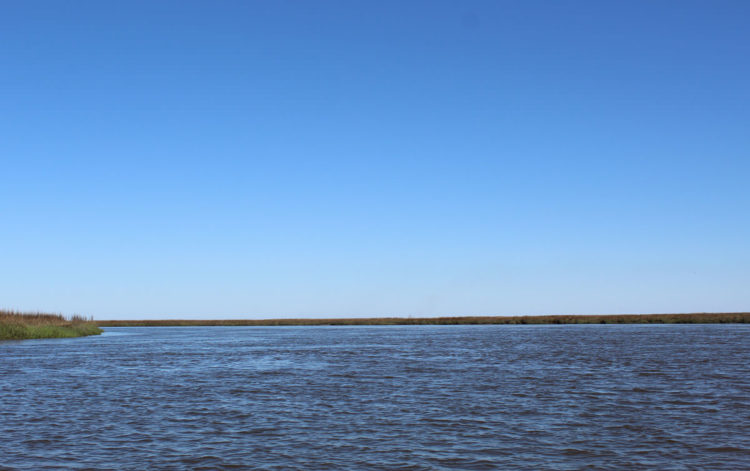 The bait was kept on the bottom using a lead weight, the size of which was determined by both the depth being fished and the current. Our shark rigs were much different. They consisted of stout, heavy action rods coupled with baitcasting reels spooled with 200 pound test braid. The bait for the sharks was the complete fillets of either whiting (a type of drum) or porgy.

At our first spot of the day I grabbed my rod and made my first cast. I let the bait hit the bottom and waited. After about 10 minutes I lifted the rod tip and turned the reel crank. Something pulled on the line so I set the hook. While there was some fight I knew right off the bat that it was not redfish. It felt like I was hauling in an old boot.

When I got the fish to the surface I could see it was a ray; a stingray to be exact and a fish that was still on my list. The ray was not a large one, weighing in somewhere between two and three pounds. Though stingrays get much larger than this, this was a first for me and I was happy with the fish. After a few photos the ray was released. 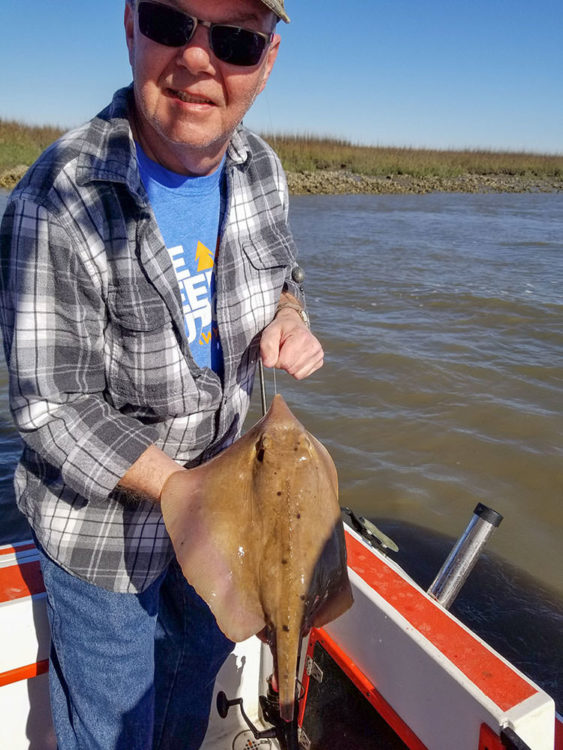 We waited another 20 minutes and with nothing more happening we pulled anchor and moved on. At our second location we used both the redfish and the shark rigs. As I worked the smaller rod, Capt. Hust got the shark line in the water. With the water temperatures the way they were there was little hope, but there was hope that a shark would take our offering. Alas, it was not to happen. Neither rod was getting any action so we retrieved our gear and moved.

Our new location was behind an island whose banks were lined with oyster beds. Once again both sets of gear were set and once again we waited. This was our last hope of the day so we kept our fingers crossed. Like with the other locations, the fishing gods were not smiling down upon us. 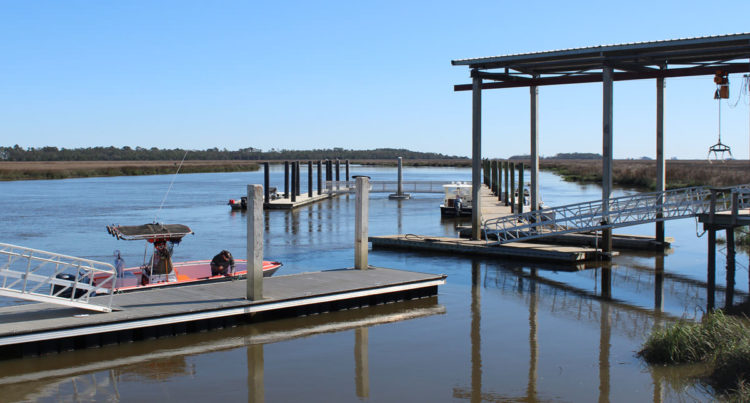 At the dock in Georgia

The people at Mad Shark Charters did everything in their power to put me on fish, but it just was not to be. Every spot we dropped anchor looked great to me and under better conditions they probably would be. This just wasn’t one of those times. We can control many things when we go fishing, but the weather and Mother Nature in general are beyond our control. I plan on visiting this area again, but next time I visit it will be during much warmer weather. If I do make it back I plan on going back out with Mad Shark Charters.