We are now in the transition period when the winter species are leaving and the summer fish are not far away. During this time more effort and thought are required to find the fish. There are still plaice showing at low and high water on fresh lugworm along with the occasional dogfish, ray and whiting.

The Gynn Wall is producing some big flounders for the match lads fishing at the bottom of the Wall with small hooks and small worm baits. Dogfish and rays are falling to fish baits as usual with distance casting certainly helping with the easterly winds we have had recently.

The wind has now turned to the west so hopefully the fishing will improve through out the week. As sea temperatures sea increase this week we should start seeing the first peel of the crab which means the smoothhounds won’t be far away then hopefully followed by the tope. There was one landed last weekend from the boat by Darren Evans which is a good sign. Crab and fish baits will come on to their own in the next couple of weeks but don’t hold off on the worm as we hopefully will get a run of school bass soon on westerly winds. 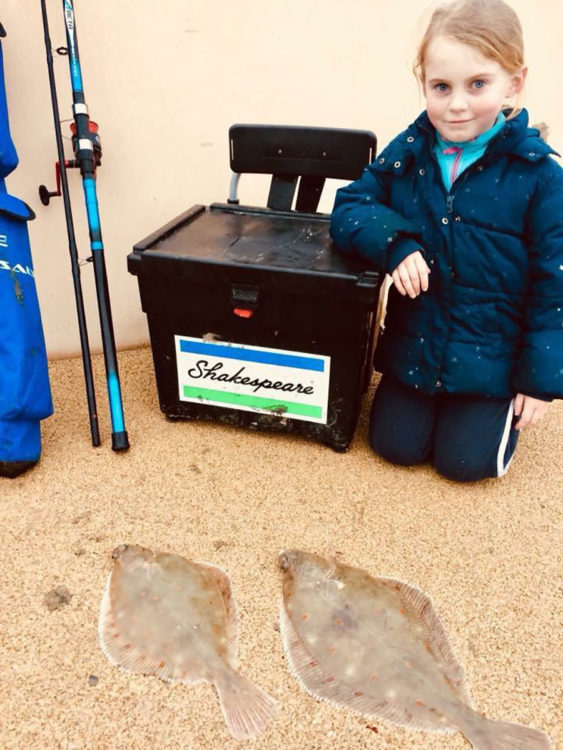 Amy with her plaice

Fleetwood and District Angling Clubs fished last Sunday at Marine beach in the hope of finding the early influx of flounders. Unfortunately, it looks like they were a couple of weeks late in arriving as half of the 24 anglers blanked. The match was for the best pair of flatfish, and three anglers had two each to weigh-in.

Winner on the day was Trevor Barnett with two flounders for 27 points. Bob Marsh had the longest fish a flounder of 34cm for 15 points.

Next match will be held at 5-Bar-Gate.

Longest fish went to guest Dawn Darwin with a 40cm flounder. The raffle winner was And Booth and the Golden Peg was won by Norman Pilkington. All fish were measured and returned.