Widely worshiped, the Red Gill artificial sandeel is a pure ‘Hall of Fame’ item in many anglers’ books. Here Steve Souter talks fondly of a trusted old faithful and reveals the story behind the more recent Afterburner incarnation. 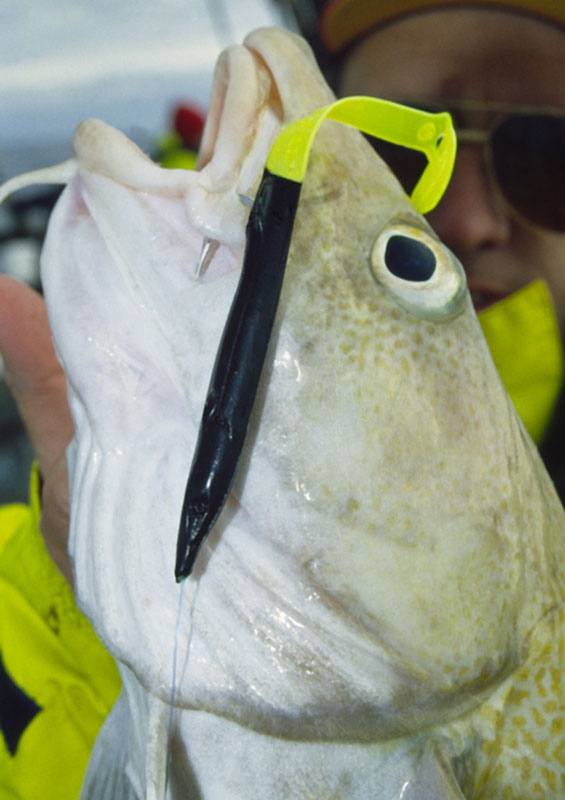 Long ago, a feature by then Sea Angler magazine editor, Peter Collins, declared the original Red Gill lure to be “more like a sandeel than the genuine article”. High praise indeed, and in retrospect perhaps not a million miles from the truth considering the longevity of the famous imitation sandeel conceived and developed by the late Alex Ingram some 40-ish years ago. As a fledgling competition angler, I was guilty of believing that no plastic or rubber ‘stick’ would catch more pollack than a bucket of beautiful big red ragworms – silly boy! In the many years since, I have time-and-again travelled all around the UK coastline fishing offshore wrecks and peaky ground for pollack, learning many fishing lessons in the process of what I hope will always be an unfinished apprenticeship.

Back then, using basically the same long flowing trace and single hook approach as I might with ragworm, industrious ‘Gillers’ would regularly and gallingly pull out bigger pollack while I battered more modest specimens on my preferred natural bait. Rubber eels were most effective worked at a fairly quick pace, and would often exploit more fish in less time than the slower live-bait method that was my forte. To ignore what my eyes could not deny would have been the worst kind of stupidity. Needless to say, I began to pay extra special attention and eventually adopted Gilling as an extension to my method armoury. Perhaps the best artificial eel exponent, or ‘Giller’, that I ever came up against was former England International Boat Captain, Ted Entwistle. Ted was a smashing angler who really knew his onions when it came to mixing plastic with pollack.

An obsessive love affair with all things rubber began in earnest not long after absorbing that old article, and continues to this day. That’s not to say that real worms, live sandeel and humble mackerel strip don’t still play key parts in my pollacking. But ironically, that now older and wiser cocky young devil never sets foot on a boat anywhere, without at least a handful of Gills etc. tucked away in his tackle box. Undoubtedly, the shimmering tail action has much to do with why Red Gills have the magic effect on pollack, cod, coalfish and bass that they do, but the correct colour selection can also be vital. In stark contrast to the natural bait approach, there is a huge array of brightly coloured and splash-effect eels to tantalise angler and fish alike. 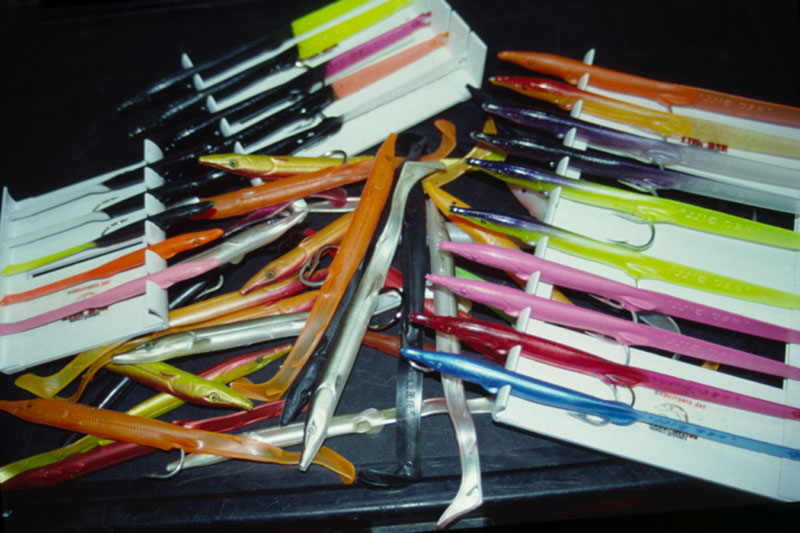 Many intriguing arguments are put forward as to why one colour or pattern appears to have the edge over another in certain areas, or in different depths or conditions. I won’t delve too deeply into these, but what the open-minded angler definitely has over the dedicated bait man is more options to keep him interested and fishing hard. When the same hapless ragworm has been unceremoniously sent to the seabed and dragged slowly back to the surface for the umpteenth time without turning the head of a single fish, it is easy to get bored. Other than replacing the worm, or changing to one of a different size, there is little to be done to instigate a take. But this is one occasion where abandoning proper bait and donning the rubber jumpsuit can really pay off!

At least 15 years before the tidal wave of American jellyworms hit our shores, a handful of well-known competition anglers were quietly importing coloured worms and all manner of rubber oddities from America. Angling author Mike Prichard, and Scottish Internationals of the time, Jim McLanaghan, Mike Shepley and Brian Burn employed them extensively for pollack alongside artificial eels… and their findings have long since been mirrored just about everywhere there’s a decent head of pollack to be enjoyed. Alex Ingram’s original curved tail, Mevagissey sandeel design pioneered the use of artificial eels, and was the forerunner to, and maybe even the UK catalyst for the euphoric uptake of various jellyworms, Mister Twisters, twin-tails, shads and the like. 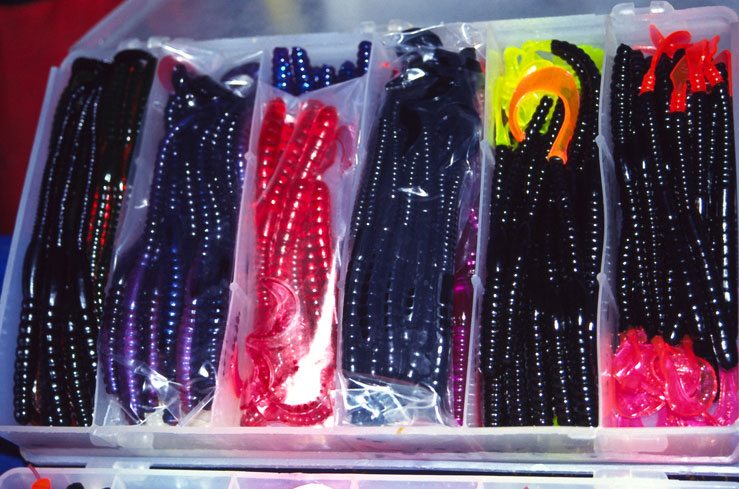 There’s no disputing the effectiveness of jellies, but I would argue they haven’t stolen a whole march on Red Gills and other brands of artificial sandeels. Both eels and worms have their days, however, I’m sucker for a good Red Gill, not just because they have served me well over the years, but also because they are far more durable than jellies. When the fishing is busy jellyworms soon get shredded and must be changed regularly. Eels, on the other hand, are far more robust and can be used indefinitely…. provided the wreck doesn’t grab them!

I have long believed Gills to be among the very best pollack lures, but the various deadly colour combinations available in jellyworms from across the pond were too good to be ignored. I wanted the best of both worlds, so I started operating on my beloved eels in an effort to construct the ultimate pollack catching entity. For years I delicately scalpelled the tails from Gills of various colours, and painstakingly glued them to different dark coloured bodies to form devastating patterns similar in appearance to several very effective jellyworms.Apart from wanting a cracking lure that didn’t tear up when a pollack so much as looked at it, the game, I concede, was to psychologically beat up the opposition who couldn’t hope to mimic these one-offs.

Constructing my rubber mutations was far from easy: only certain glues would bond the separate parts permanently, and even different batches of the same damn solvent were found not to work. Some would dissolve the rubber on contact, while others were about as adhesive as tap water. My makeshift method of actually marrying up the two-part super lures was equally nightmarish. Forming the improvised join took time. And after many fruitless hours spent hunting for an appropriate hot melding tool, the only way I could find of tacking the things together was to press the parts together for many torturous minutes, while doing my best to avoid permanently cementing my fingers! This was horribly uncomfortable, but the contorting tribulations were worth enduring as the designer Gills worked a treat. Good ideas get noticed, and I suppose the inevitable was bound to happen sooner or later. 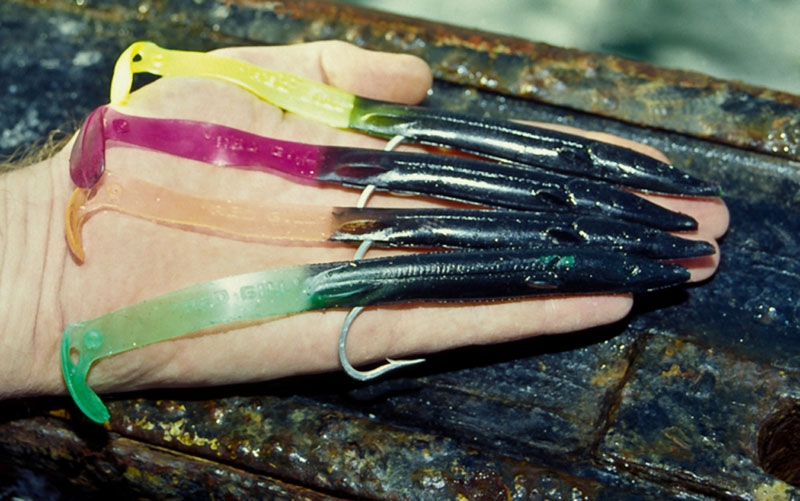 Marilyn and Stewart Ingram, who ran Red Gill at the time, got wind of my Frankenstein eel exploits from Pevensey-bay angler Jim Whippy. Thereafter, the result of extensive discussions and later field-testing was arrival of the Red Gill Afterburner range of lures. Afterburners are simply black-bodied Gills with coloured tails. I prefer the 115mm Rascal size RGA eel; my favourite tail colours to date are yellow, orange and wine. As long as there are pollack, cod and coalfish to be caught, Red Gills will catch them… and Afterburners amount to Red Gills with attitude.

How to hack a Hokeye