Dave Barham takes the short trip to the Channel Island of Alderney to catch big brill and more bass than you could shake a stick at.

The Channel Island of Alderney offers some of the best boat fishing sport this side of the Atlantic, with a near one hundred per cent chance of catching big flatfish at the right time of year. I’d wanted to catch a brill for years, and in the spring I made my dream a reality by arranging a simple weekend visit to the Channel Island of Alderney – a place that opened my eyes to the quality of sport that can be had just outside of the UK.

The flight to and from Alderney is a buzz! Once on board, the pilot gives you a safety talk and hands out earplugs (it can be quite noisy inside this three-engine plane). You take off, then 40 minutes later you land in Alderney. It’s a great experience and you get to see some fantastic scenery on both sides of the Channel. And, for around £130 you can get a return flight – yet another reason why this kind of angling adventure is becoming more and more popular. 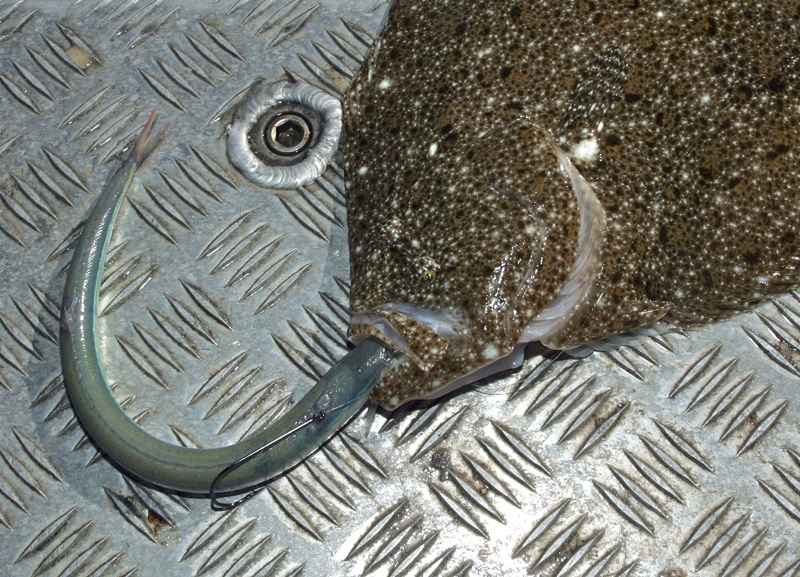 Leave Your Tackle At Home

My skipper for the weekend, Stuart, picked me up from the airport – there’s no hanging around for hours to collect your luggage here, it comes off the plane about two minutes after you do and is brought directly to the arrivals room. I didn’t bother taking any fishing gear because Stuart’s boat ‘Alderney Felix’ is sponsored by Pure Fishing, so all the gear on board is top notch. I ended up using a 12/20lb Abu Suveran Pro boat rod matched with an Abu Big Game 7000C multiplier that was loaded with braid – absolutely perfect for the fishing I was doing. This is just another reason why the lure of Stuart’s set up is so appealing, it’s so easy to get on a plane without lugging all your gear with you – then go fishing. 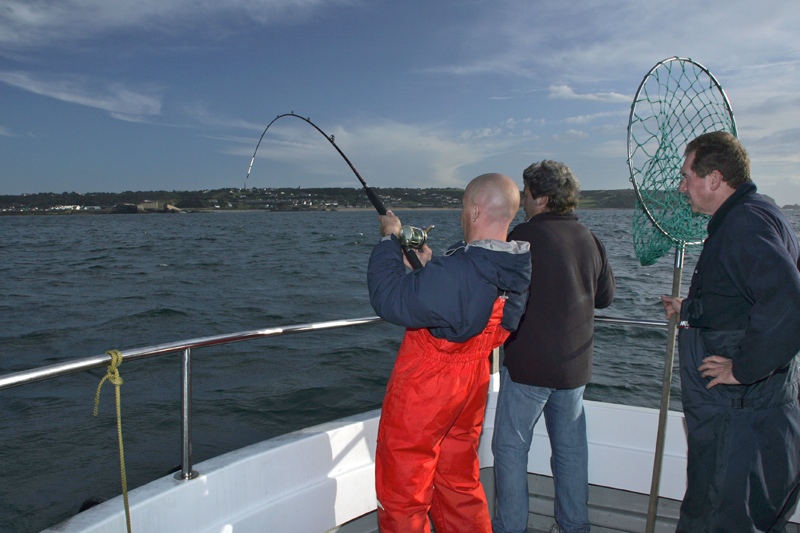 Shortly after arriving I was sitting in the wheelhouse of the boat. The plan was to go a couple of miles offshore to have a go for turbot and brill. We’d only get four hours fishing in, but Stuart was certain that we would catch.

The tackle used for this type of drift fishing is simple. The aim of the game is to use a 6ft-long trace of 25lb clear mono and a size 5/0 hook. Stuart prefers to use shorter traces when after the turbot. The secret to this rig is the watch lead used to anchor the rig to the seabed while drifting; the action of the flat lead bouncing over the sand creates large ‘puffs’ of sand, which in turn excites any flatfish in the area. 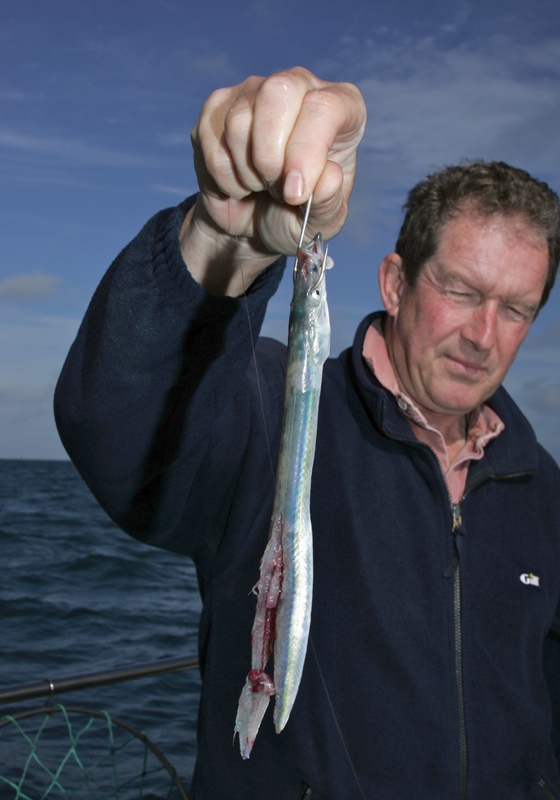 There are only two baits worth considering – mackerel and launce. A live launce is the killer bait for brill, but for turbot a belly strip of mackerel or fillet of launce is the key. It really is a simple affair too, you pass the point of your hook through the launce, mackerel or launce fillet once only – this gives the ultimate in bait presentation, allowing it to perform naturally as the speed of the drift drags it along the sea floor.

I’ve fished for big flatties on numerous occasions, and it really is a case of staying focussed and concentrating on what’s happening below the sea’s surface through your rod tip. At the start of the drift you drop your baited rig to the seabed, then pay out about 20 yards of line as the boat pulls away from the lead on the drift – it’s important to keep a tight line while doing this. 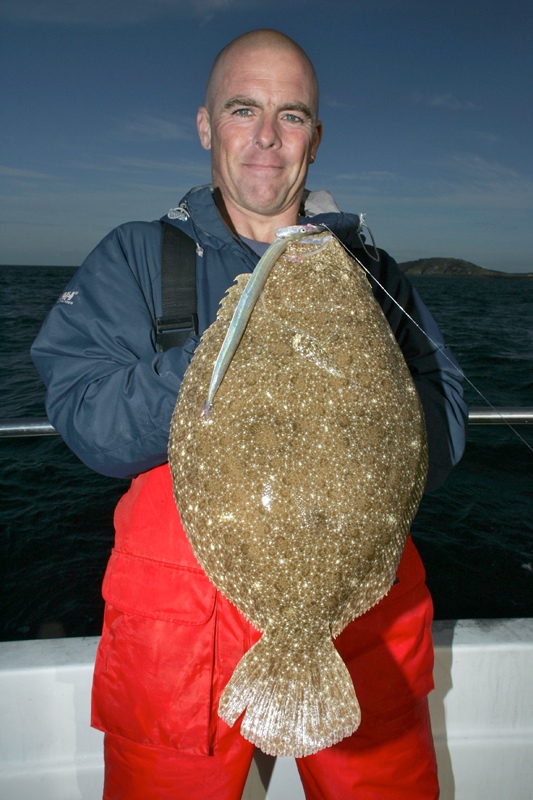 As the boat drags your lead over the seabed you must keep your reel out of gear with your thumb planed firmly on the spool in readiness. As soon as you feel a fish grab hold of your bait (or as soon as you feel anything that could possibly feel like a fish grabbing your bait), you must take your thumb off the spool and give it line. Count to five, re-engage the spool and wind into the fish – don’t strike. If the fish has taken the bait you will feel the weight on the end, if not – maybe it was just a large bump of sand, then simply repeat the process and keep your thumb on the spool in free spool mode. 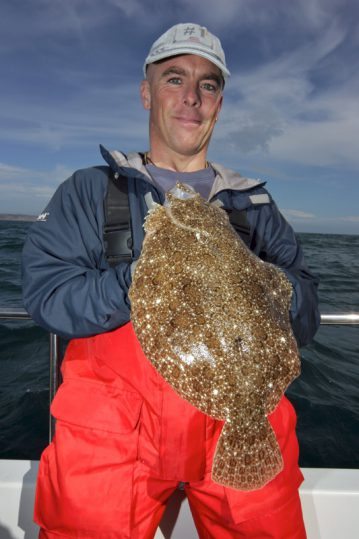 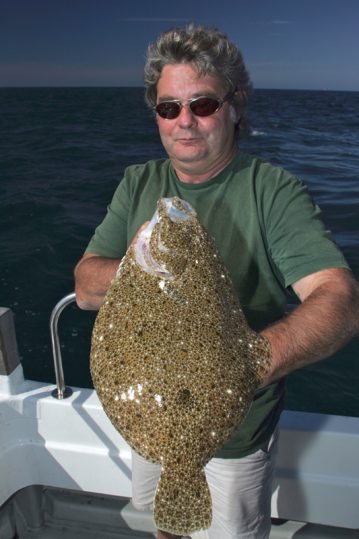 It takes a lot of practise to determine what is a fish and what isn’t, but unless you try it you will never know what it feels like. In short, it’s best to be over cautious and pay out line at the first indication that something isn’t quite right at the business end – even the biggest turbot can give the shyest of bites.

Most of the time you will feel the flatfish suck in the bait and give a shake or two of the head – that’s the most common ‘sensation’ that anglers feel through the rod tip – especially when using braid. Sometimes it will just feel like a dead weight on the end, but in either case make sure you pay out lots of free line to allow the fish to swallow the bait with no resistance.

Plenty of Bass Too!

We were fishing within twenty minutes of leaving the harbour, and it was experience that boated the first fish in the form of Stuart’s friend Howard, landing a fine brill of around 5lb. That first brill came within five minutes of the first drift and I was amazed that it had happened so quickly!

Experience proved itself again on the next drift as skipper Stuart boated a small turbot, again around the 5lb mark. Within seconds of starting the third drift we had two fish on! It turned out that they were both bass in the 3lb bracket. Then at the end of the drift I hooked into another bass, this one a tad bigger at 4lb. Each subsequent drift saw at least one (quite often two) bass caught. We moved along the bank from one end to the other, but we just couldn’t keep away from the bass. 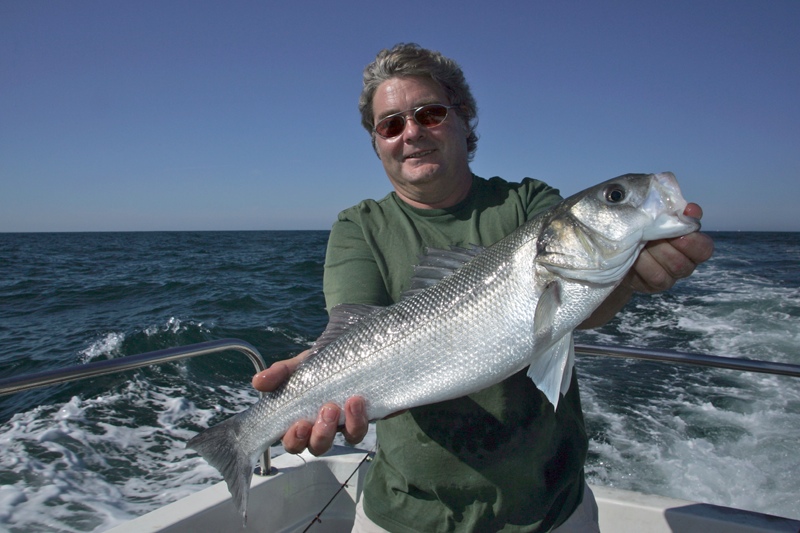 It sounds crazy doesn’t it? Here I am, saying that we couldn’t keep a bait in the water long enough to catch a brill or turbot because we couldn’t get through the bass – which by the end of the afternoon were averaging 6lb! This place is a boat angler’s paradise – I’ve never seen so many bass in this size range caught so consistently when they weren’t even being fished for!

After a rather hectic and enjoyable but frustrating three hours, Stuart decided to move off the bank and head back to the harbour. “There’s a good series of banks just five minutes outside the harbour entrance, we’ll have half an hour on there before we go in,” he said. I’ve been in this situation many a time, and it’s often the case in the UK that marks near to port get hammered by charter boats – but that’s the beauty, ‘Alderney Felix’ is the only charter boat in Alderney. 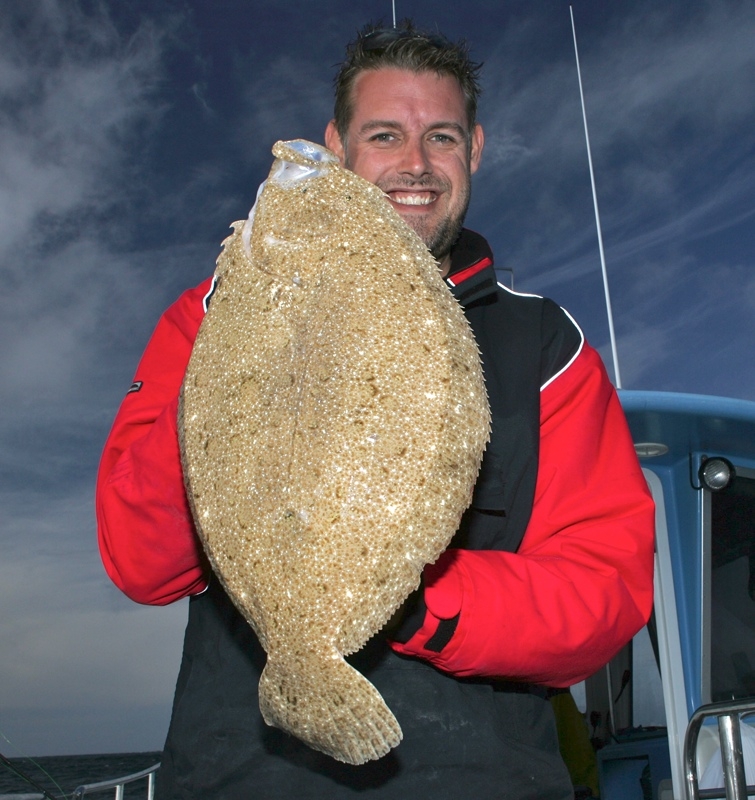 We started the drift and, yep you’ve guessed it, we were straight into bass – on launce fillet, mackerel fillet and live launce – it didn’t matter what we put down, there were just so many bass that they took it. With just ten minutes to go, I hooked into something that I knew wasn’t a bass. After a really good, dogged fight Stuart slipped the net under my first ever brill – a magnificent fish weighing 6lb 12oz. I was over the moon. The next day proved to be just a good, if not better, with everyone catching at least two brill and plenty of small turbot – plus dozens of obliging bass. I can’t wait to get back over there to try my luck with a big turbot this year. If you don’t mind travelling for your fishing, I can recommend Alderney as a great weekend away with the real possibility of smashing personal bests.