Shore: Heavy seas brought a few cod inshore, but not in any great numbers as yet. Lots of loose weed and debris in the water is making life difficult for cod anglers. Steetley pier fished better when the sea started to drop off, with big bags of whiting and dabs reported. Odd better bass to 5lb reported from local clean ground beaches too. The Durham beaches have produced whiting and odd small cod. Rock edges between Roker and S.Shields starting to produce a few cod. Tony Grant had one of 5lb from Marsden, but most fish are smaller.

There was plenty of sport in the Wear proir to recent heavy rains, but flounders, eels, coalfish, and small codling still present in good numbers. The last Eastenders sweepstake fished at the Glass Centre saw flounders, eels, whiting, and coalfish weighed in. Steve Rackstraw had 6 fish for 165cm, Leo Fenech had 4 for 125cm, Chris Hossack had 101cm, and Micky Sopp had 99cm. Longest fish was a flounder of 36cm taken by Paul Hossack. The East End and Hendon sweepstake fished the following night saw only two weighing in. Andy Rutherford won with a codling of 1 – 03lb, and Barrie Robson had a flounder of 1 – 02lb. The Eastenders h.s.f. Open at the Golden Lion on Saturday produced better results, with 24 out of 29 landing 52 eels and a flounder. The best fish was an eel of 1 – 12lb for Brian Turnball. Bobby Bland had an eel of 1 – 05lb, whle Alan Burton and Joe Wilton tied for third with eels of 0 – 15lb.  Brian Turnbull also had the heaviest bag with 3 eels for 3 – 03lb.

Sunderland S.A.A. had a rover match on Sunday. Barry Wright had a fine plaice of 1 – 11lb from the Walkway, Andy Rutherford had a flounder of 1 – 08lb, also from the Walkway, and John Robinson had a mackerel of 1 – 07lb from Roker Pier. 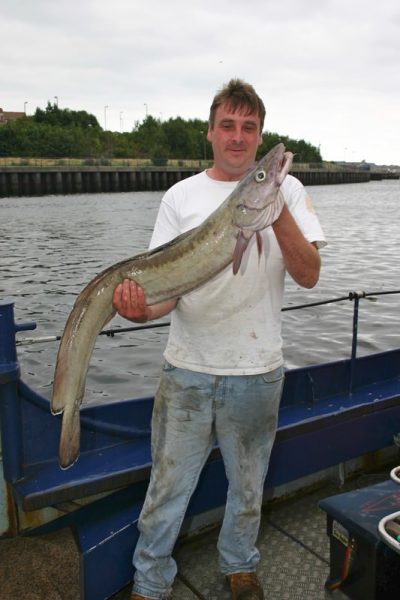 North of the Tyne, Autumn cod are starting to show from the rock edges. Rob Thirwell only needed a small fish of 1 – 06lb to win the first Newbiggin A.C. winter match, with Bob Ferguson winning the next match with a brace for 3 – 15lb from the Beacons.

Boats: The ‘Swordfish’ out of Sunderland found the mackerel well offshore but this fresh bait produced 25 ling, with the biggest of 13 – 08lb taken by Jeff Ayre. A midweek trip saw some bigger ling aboard Swordfish. Neil Evans had one of 24 – 10lb, and Jeff Ayre another of 22 – 12lb. ‘Sarah JFK’ out of the Tyne also found some big ling, with Patrick Ward landing a 26 – 12lb monster in a 50 fish catch. Inshore boats have been taking reasonable numbers of smaller cod, with odd double fish and a few pollack among them.

Coming up: The Ryhope Open is on Sunday September 28th. Fishing is from 1pm – 5pm between the South end of the Blast Beach and S.Shields Pier, including the Walkway. Roker Pier is also in bounds weather permitting, and the Wear is open up to the Town Bridge. Register at the Welcome Tavern,  Ryhope village from 10.30am till 12 noon. Basic entry is £10 seniors, £5 juniors plus the usual team events and pools etc. The weigh in is from 5.15pm till 6.30pm. Top three prizes for the h.s.f. are £500, £200, and £100. There is a £50 prize for the top lady, £50 for the top junior, plus the junior winner receives £50 worth of tackle, and £50 for the heaviest flatfish. Contact Bob Surtees on 0191-5237272 for details. Pre-entry tickets are available on Wednesday 24th at the Welcome Tavern from 8am till 9am only.

There is an open boat match on Sunday September 14th fishing from 9am till 4pm at the Royal Quays on the Tyne. Entry is £8. Boats can leave any moorings on the Blyth, Tyne or Wear but must weigh in at the Royal Quays by 6pm. Further details from Rutherfords Angling Sunderland on 0191-5654183.

There is a sea angling and boat show at the Nissan Sports and Social Club on October 25th and 26th starting at 10am. Entry is £3 for adults and free for those under 12 years accompanied by an adult. Anglers wishing to attend, and companies interested in exhibiting should contact Sam Harris at samharris01@aol.com. Tel: 0191-5184561.