Steve Souter discovers that quiet Braye harbour on the Channel Island of Alderney is packed full of fishing surprises, including red mullet, Couch’s bream, masses of black bream and more tail-walking garfish than you could shake a stick at.

Weathered concrete gun emplacements and derelict fortifications rash the Alderney coast. In fact, signs of German wartime occupation are dotted everywhere, and whether these unblended greys are carbuncle blots on the landscape, or necessary reminders of mid 20th century madness is undecided. The weather was set to turn nasty later according to the forecast, and a quick run out to Swinge, beyond the sanctuary of Alderney’s famous breakwater confirmed a building wind. Fortunately, there’s shelter and excellent fishing within the harbour itself, and we tied up to one of numerous large mooring buoys dotting the outer edge of Braye Bay for a spot of mixed species fishing. 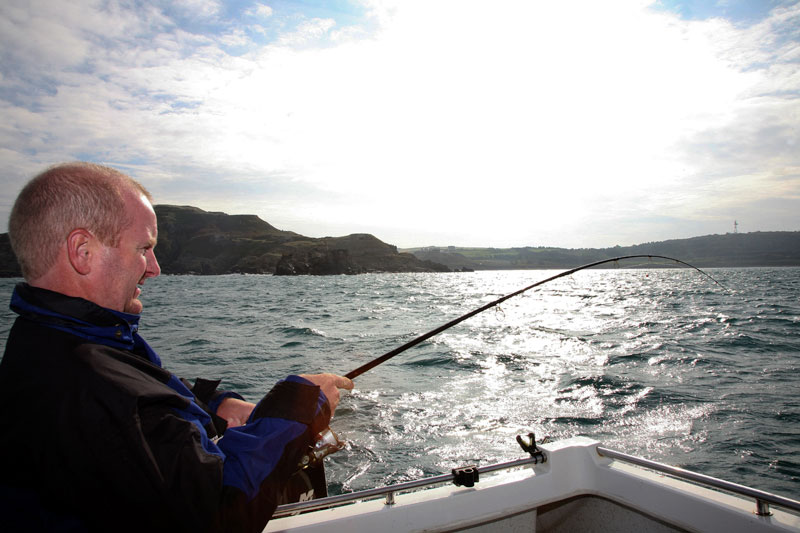 The mood on the boat was typically raucous. Between five solid days fishing and trying to run a full-time tackle business, my host, Mark Harding, hadn’t had much sleep in a week. Sun and fatigue made his face look like it had been set on fire and put out using a football boot… and I told him as much!

We could see anglers shuffling about on the nearby shore. One reason for choosing this particular spot was information that some good catches of Couch’s bream and red mullet had come from adjacent rock marks. I had not caught either species to date, and wasn’t about to pass up the chance to change that. Mark is a simple fishing creature who doesn’t concern himself with the intricacies of fancy rigs. In fact, if it involves more thought and effort than tying a great big tope hook to a piece of heavy mono, or clipping on a bass plug, then he doesn’t want to know. So it fell to me to furnish us both with suitable rigs for the bream and wrasse that he had indicated would be our most likely attendants. A quick rummage unearthed a couple of light two-hook paternosters fitted with small hooks that fitted the bill well.

Flow and depth around the harbour entrance were minimal, and leads of just two or three ounces were ideal. I flicked out two ragworm baits aimed at anything that might be down there, while Mark started with squid strip for bream of the black variety. Signals transmitted up the braided lines indicated a mixed bottom of mud and stones depending on which way the boat swung on its tether. 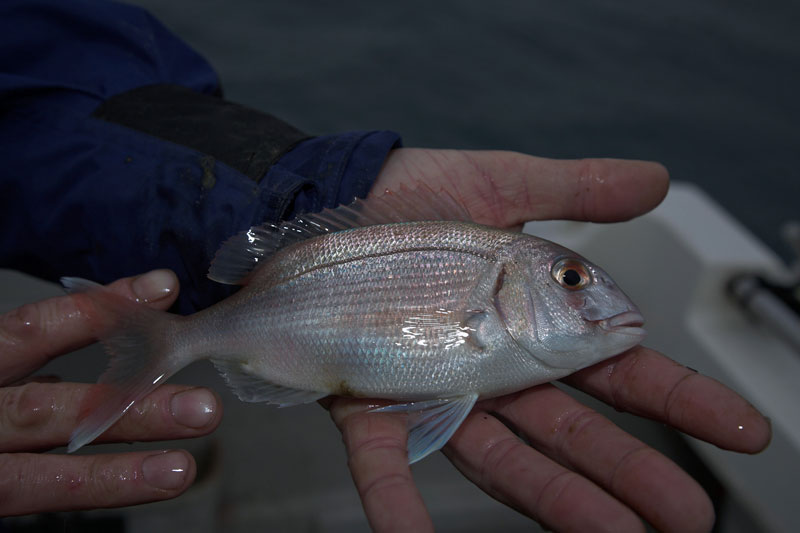 Mark was on his mobile phone talking shop when I pulled into a series of pecks that the rod’s match tip trumpeted impressively. The gambler in me would have called it as a baby black bream but I’d have lost the bet. A beautiful little Couch’s bream that would have been more at home in a saltwater aquarium was quickly photographed and released. My fishing pleasure has never just been about catching big fish. I can take as much satisfaction from small fish and new species when they are on my radar.

A real scrapper of a ballan wrasse gave the Daiwa Alltider match tip a good workout before the first black bream of around 2 lb fell to Mark’s squid bait. More black bream followed to both ragworm and squid, but no more Couch’s were caught. A spot of drifting out towards Bibette Head brought more wrasse, several pollack and a few black bream, but lumpier conditions meant we soon headed back into the more comfortable waters of Braye Bay. 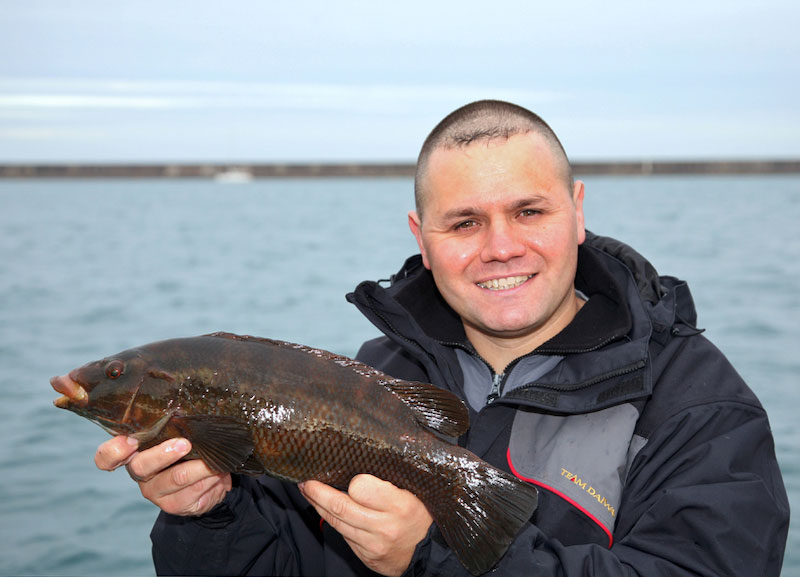 We drifted between the buoys and enjoyed pretty much non-stop action from wrasse and bream. I had switched to a long two-down and fished ragworm baits hard on the bottom. My thinking was that I’d tickle the bottom for a bit, then, if I didn’t get anything after a minute or so, I had the built-in option to retrieve for pollack.

Mark was on the phone again and not paying much attention. I was just about to start inching the line back for pollack when I got an odd bite which instantly turned into jangling weight on the rod tip. Most species of fish have a signature bite that is quite distinctive. Thereafter the ensuing tussle usually reveals definitive characteristics that can betray a fish’s identity long before it is seen. Recognising and reading these signs comes with experience, but even then we don’t always call it correctly. The alien bite and the scrap offered no clues to the identity of the attached fish, but I was fairly certain that I had two fish tugging in different directions.

To cries of “You jammy git!” I leant over and flipped a double-shot of lovely red mullet into the boat. An incredulous Mark just shook his ginger crown in disbelief while I casually polished my fingernails on my breast. Much as I tried to repeat the feat, I succeeded only in catching wrasse after wrasse.

Our next move was to push deeper into the harbour and tie up to the holding pens where the potting boats deposit their crabs until they are taken for sale. Mark’s take on fishing here is that the floating pens act as holding features and giant pots of ground-bait. “A constant shower of food and detritus particles falls from the pens, which draws lots of fish”, he said. 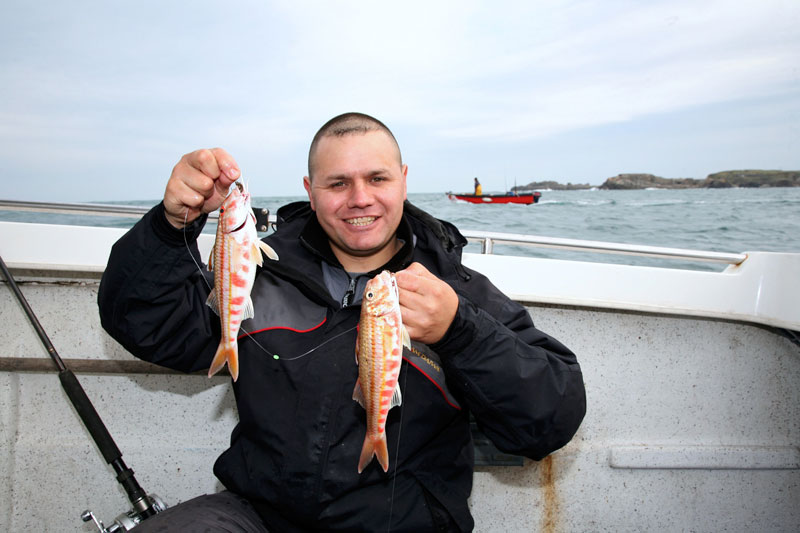 There were garfish scooting all about the boat and masses of black bream of all sizes milling around the pens. If we did manage to get the rigs to the bottom unmolested, then double-shots of bream were almost guaranteed. These varied from a bit bigger than a matchbox to slab-sided three pounders in size. If you held the rig anywhere between half-depth and just below the surface, double-shots of garfish were equally obliging… not surprising given the numbers bursting the surface here, there and everywhere.

Something that did surprise me was the number of bream clobbering baits close to the surface. I had put over a float rig to make the most of the gathered gars and caught just as many black bream. Like a battery of miniature camera flashes down in the gin-clear water, you could clearly see several fish at a time charging the squid bait wafting only 4 feet under the float. Those glinting sliver flashes I had first taken to be frolicking garfish were more likely mixed scrums of both bream and gars. To watch a fish beat the rabble rest to the bait, flash a silver turn, and bury the float was a magic I indulged until the need for dinner bade Mark make the three-minute hop back to his berth in the inner harbour. 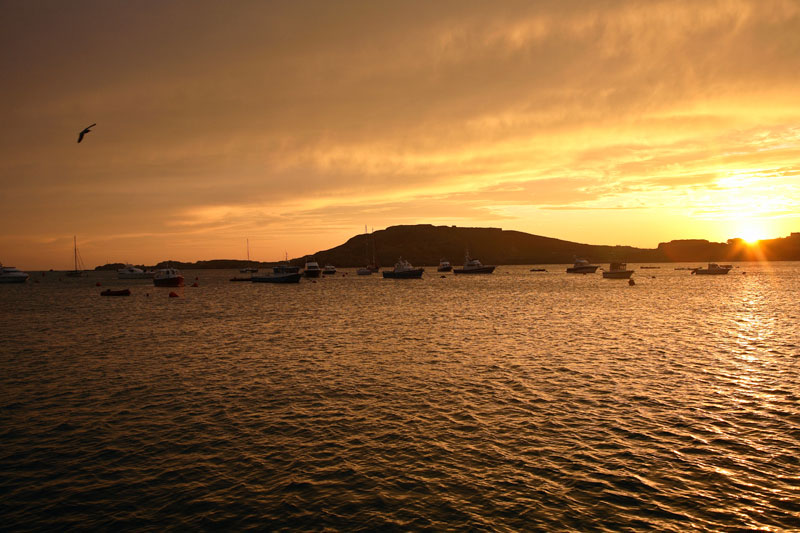