There’s a big change occurring in sea fishing on the North East coast… and it’s got nothing to do with the climate. Until a few years ago nearly every angler fishing the rough ground around here would use traditional rock fishing tackle: a stiffish 13ft rod and multiplier with about 30lb mono line. A quick scan along the rocky shores today and you might be surprised to see an ever increasing band of anglers with 16ft rods and fixed spool reels loaded with braid. This change has evolved by latching onto a concept that takes its origins from continental anglers, who use similar gear with light mono lines to cast huge distances. Of course, this basic concept would never have worked that well on this part of the coast due to the rugged terrain, but factor in the final piece of the jigsaw, braid, and it works a treat. 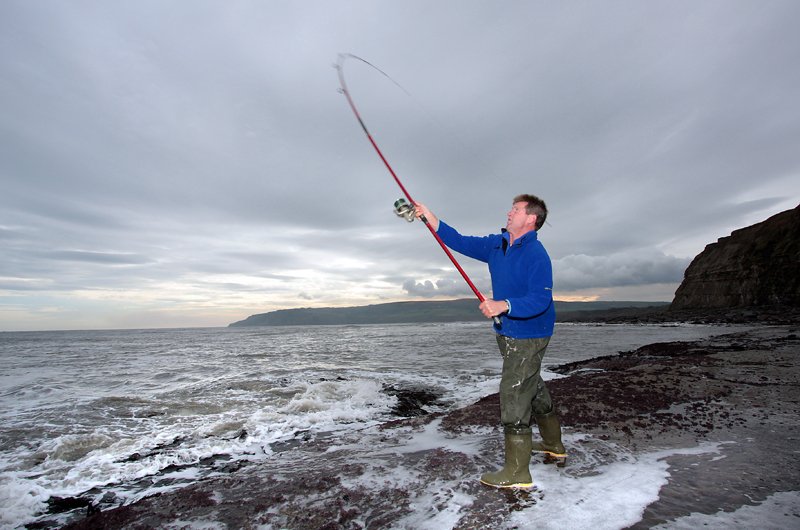 New micro braids have allowed rough ground anglers to mimic the continentals without sacrificing the strength of line. Some 30lb braids are the same diameter as 5lb mono, allowing all anglers to achieve new horizons in distance whilst still maintaining the line strength required to haul big cod ashore. But does the set-up really work? Well in my opinion it definitely does, having caught plenty of fish up to 8lb, its just as at home pulling those north sea cod in as it is hauling whiting in three-at-a-time plus, it’s really good fun to fish this way too. With the increasing exposure of these new tactics more anglers are joining the swelling ranks of those already exploiting the benefits it can produce. 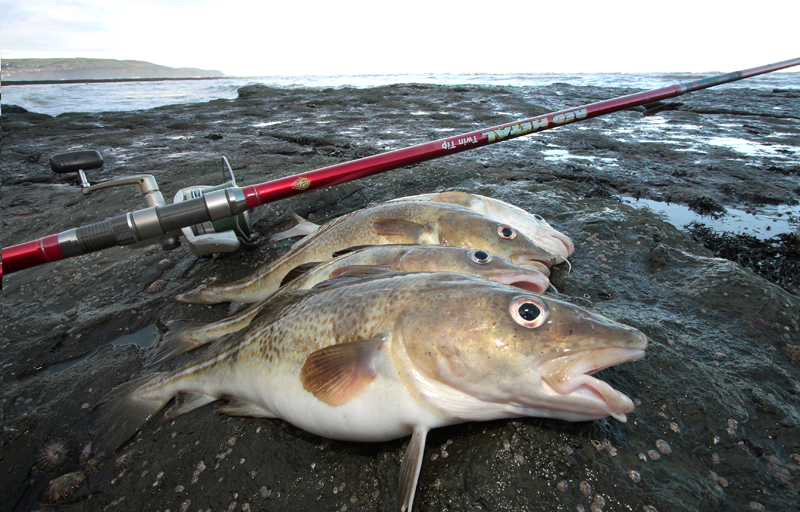 As well as using lower breaking strain braids (20-30lb) to achieve ultimate distance, you can also use the heavier braids (50-60lb) in really heavy terrain, allowing anglers to still achieve long distances but also allows an increase to the strength of terminal gear, which was often sacrificed with mono whilst trying to maintain casting distance. I’ve often stated that distance isn’t everything on this coast, but just sometimes it’s nice to have the ability to get the bait an extra 20-30 yards. The number of manufacturers of braid is increasing all the time so there is plenty of choice and prices are cheaper than when they first came out. Brands like Power Pro and Berkley Whiplash are among those I have used and would recommend.

As for the choice of rods, there is now a whole array of long rods on the market which are equally at home on the rocks as they are on the open beaches. I have always said you don’t need a really stiff rod for rock fishing; you need one that can achieve a nice bend so it’s castable, but still maintains a backbone to transfer hauling power through to the fish. On first impression these long rods can appear ungainly and awkward, but they are generally very light and easy to handle. 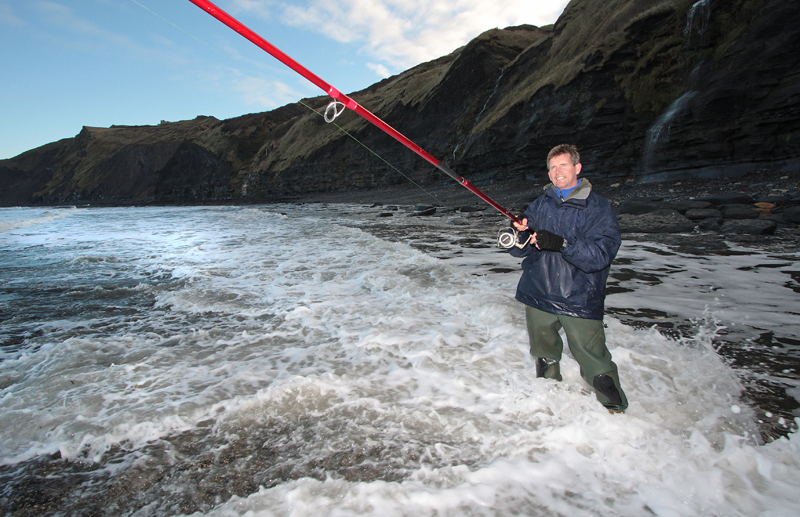 The increased length of these rods in combination with a fixed spool reel allows even average anglers to cast further without having to resort to fancy power casting, which can be very difficult and perhaps not the most sensible thing to do when balanced on an acropod or a kelp-strewn ledge! No need to swing the lead, a simple overhead thump will put the bait where you want it effortlessly. This is one of the big appeals of such rods for anglers wanting to achieve better distance without any need to reinvent themselves as power casters. I was using the Shakespeare Red Metal Twin Tip in this case.

Fixed spool reels have also come on in leaps and bounds in recent years. But while not directly contributing to the extra distance as much as the long rods or thinness of the braid, they do allow the angler to use the braid to its maximum effect without the risk of a potentially disastrous birds nest. Previously, using a fixed spool reel on rough ground has been the butt of many jokes; often associated with the less capable casters and also lacking the capacity to hold sufficient yardage of 30-35lb mono, certainly as far as the more modest fixed spools are concerned. Now however they are winning over many converts to this new and highly effective rough ground regime. 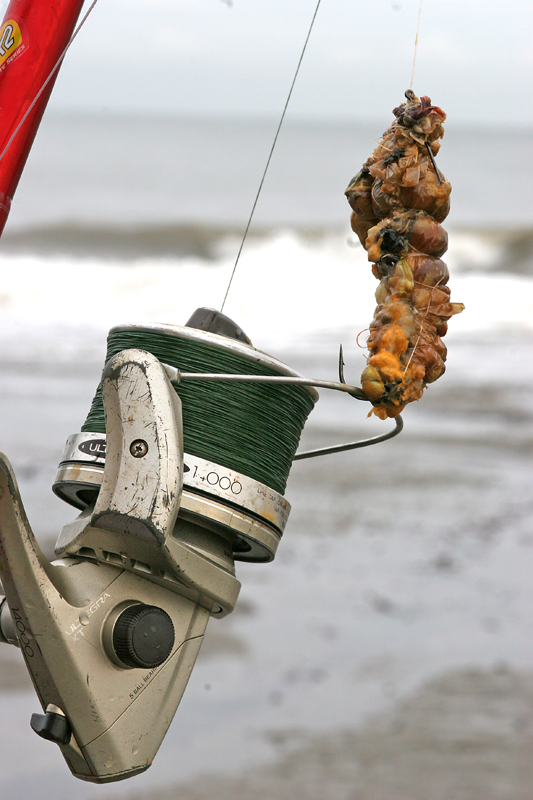 I have used braid for well over 10 years since the first Gorilla braids came out, and have also used them on multipliers with some good success. However, the downside to using braid on multipliers is that it digs in when striking fish, or when you are pulling against a snag, you only need one small fluff or snatch when casting and its bye bye £20+ worth of braid! So it was an expensive learning curve that led me to try a fixed spool reel… and I have never gone back to using braid on a multiplier. 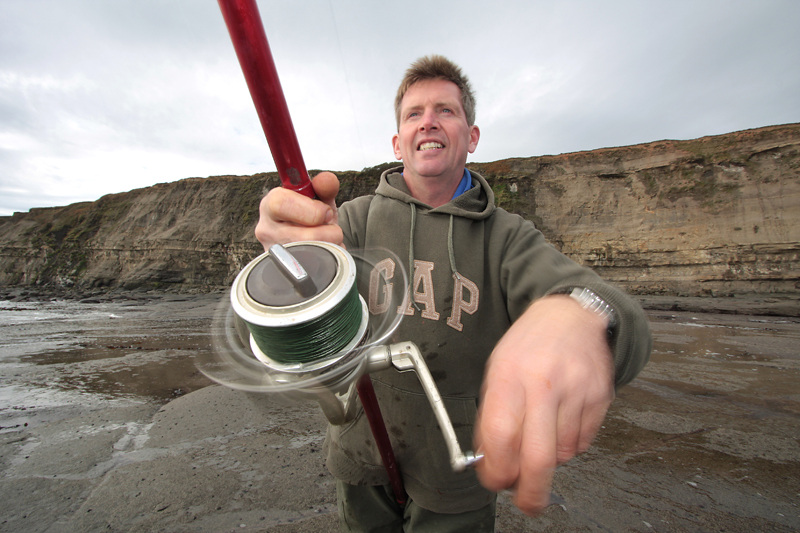 Having said that, using braid is still expensive compared to mono and losses still occur over the rough ground. A single spool of braid can be the equivalent of a whole year’s supply of mono, but such is the price of progress.

Absolute pros and a few cons

Some of the major benefits of this set-up is that the tackle is very versatile: cast long or short without issue; spool switching is a doddle compared to multipliers; the long rod takes nearly all the physical effort out of casting; and the braid indicates every bite. This tackle is also exceptionally easy to use in the dark, or when your hands are cold – exactly the situations you hate when casting a multiplier as spot on timing and control is essential.

While this sounds like the holy grail of fishing set-ups, I look on it as another string to my bow and still use my traditional gear when conditions dictate. Occasionally I have found that in really big seas the braid, having no stretch can drag gear ‘fast’, or break the grip-lead out. Also, using the 16ft rod in very windy conditions can prove troublesome; it’s a lot harder to hold for hours and can be prone to being blown over by strong side winds. At other times I’ve had several really good bites come to nothing, thinking with braid they should really hook themselves, but haven’t. In such instances I have switched back to mono – this is quick an easy to do with the fixed spool – an enjoyed instant success. 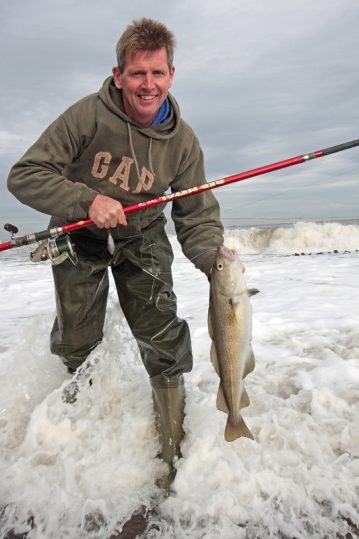 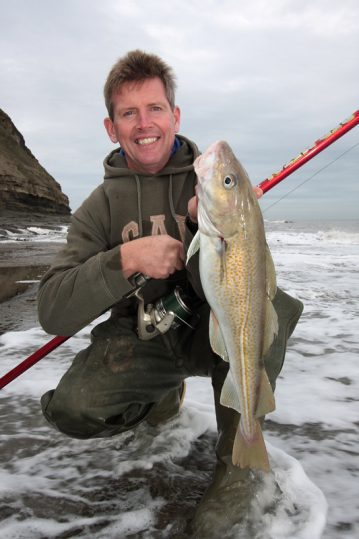 When winding fish in, rather than a continuous reeling action as with multipliers and shorter rods, it’s often better to use a slow extended pumping action. This uses the long rods softer action to act as a shock absorber that smoothes out the retrieval to compensate for the braid having little stretch. One of the bonuses of no stretch is that bites are very aggressive and usually result in instant hook-ups. Once hooked, you can feel every nod and pull of the fish in a way that is far more exhilarating than mono. You can also judge when the fish is bumping over rocks and ledges so can adjust your force on the fish so that you don’t tear the hook out.

Here’s couple of handy braid hints. Braid can be difficult to pull against if your terminal tackle becomes snagged up. The thin diameter of the line can swiftly dig deep into cold flesh, so beware and always have a glove or cloth to hand to avoid a nasty injury. Tying braid to a mono leader can be difficult, but I have found the bimini twist to work well. Or, if you can get away with it, do what I often do and use a braided leader. The expressive bend of the long rod easily compensates for the lack of leader stretch, and all you have to adjust to is that the cast comes through a bit quicker. 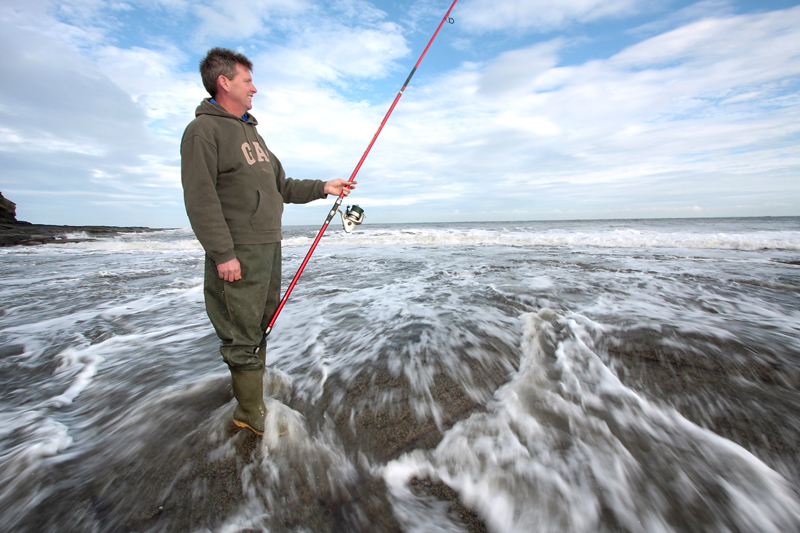 As for success, as the pictures show, long rods and fixed spool reels once thought only fit for beach fishing are now making big inroads into territory that was once the bastion of stiff rods and heavy duty multiplier reels… oh, and the occasional Scarborough reel in the case of a certain Mr Dave Medd.