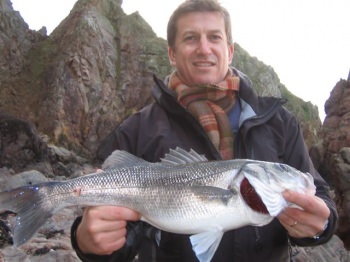 Here on the island we’ve been fortunate to experience some really good fishing yet again. The Autumn never lived up to the Alderney hype but since November we have been on song. The best of the fishing has been on the dark nights during the smaller of the two spring tides each the month. Red mullet, sole, tope, conger eel and bull huss are all affected by ‘light’ pollution and the island is fortunate that the only light sources are the moon and the angler’s headlights.

Some nice sole have been caught with the best session resulting in five fish being beached. Some anglers around the UK they might be thinking “only 5?” but when they are all over 2lb and the best knocking the door of 4lb it is terrific fishing. Throw in a few red mullet and some bass too it all adds up to a brilliant session. The best of the sole fishing tends to be in the early hours of the morning and occasionally you’ll pick up a bonus plaice too.

The red mullet haven’t been as prolific as in previous years but some nice fish have been caught with several over 2lb. They’re the most sporting of fish , ven on light gear but they do give a distinctive nod and a rattle, and they taste terrific which explains why they fetch top prices on the fishmongers slab. My missus has a terrific recipe for them and it is a joy when I winch one up the beach. As you may have read in my previous reports, they are usually caught when sole fishing with worm baits on simple rigs, often very close to the shore.

We have had a lot of bass around again this year as well. Bags of up to twenty-seven fish have been landed during a session, with fish to 10lb 2oz. These are again on worm baits if you want numbers of fish with squid or crab attracting the larger specimens. Several smoothounds to low double figures have been landed as well to anglers fishing with crab.

Tope to 30lb have featured in the catches of those anglers willing to forego the table fish and target this hard fighting species. Conger and huss are virtually ignored at this time of year but there are plenty out there willing to take a large fish bait.

The odd codling has shown too although not in sufficient numbers to target them. One or two rays have been caught, with small blondes and a few small eyed to 9lb featuring among the catches. This month is a better period for these species plus you have a good chance of an undulate or two.

Day time fishing normally consists of a bit of bread and a float for some mullet or plugging for bass. The plugging rather strangely has tailed off but at the beginning of this reporting period the fishing was fantastic with plenty of fish to 6lb. I had four sessions myself and all produced fish. Other lure anglers tried over the Christmas period but it proved to be slack with all the bass now seeming to be feeding hard on the bottom. A switch from plugs to softer shad baits cast and retrieved with a sink and draw motion will sometimes do the trick.

The mullet fishing has been very good. We are still awaiting the arrival of the bigger fish but bags of up to five fish have been caught. The best fish reported lately was just shy of 8lb. When the sea is calm plenty of fish spotted jumping around the bays.

A welcome run of black bream just before Christmas boosted the sport around Alderney, with some cracking fish in from the Breakwater around 3lb 8oz. Some giltheads were caught too with most around the 2lb mark.