Rock fishing is dangerous regardless of how the pursuit is romanticised in words and pictures. There’s no hiding that rock anglers die every year and we should take all necessary precautions to keep safe says Steve Souter.

The headline says it all, and it is with considerable dread that I stare bleakly at another newspaper story detailing the disappearance of an angler from the northern rock marks. Having had some first hand experience of exactly what can go wrong on exposed rocks, this is the same horrible phantom dread that is visited upon me every year around this time. It is rare indeed for a winter to pass without some poor soul being claimed by the sea. With a goodly chunk of the cod season remaining, and potentially bigger seas yet to come, it’s a chilling fact that this might not be the winter’s last victim. 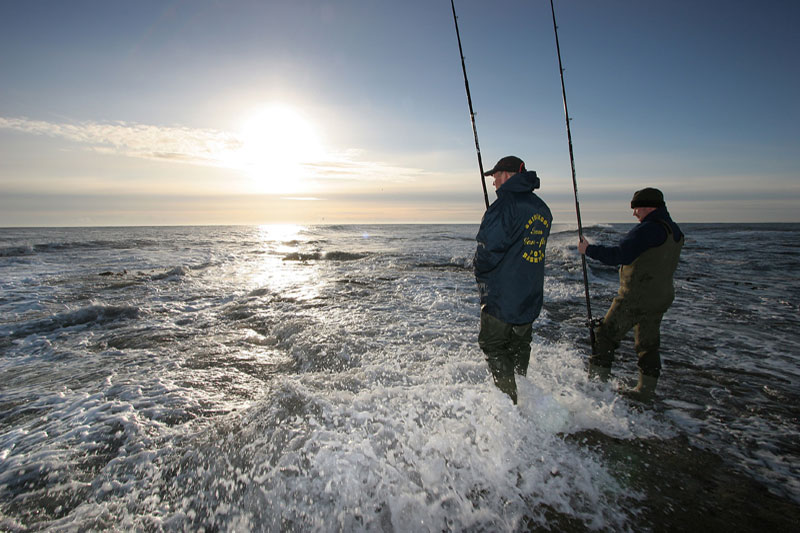 Rock fishing is dangerous whichever way we choose to look at it, and it is up to us to minimise the risks. I have said before that it is not just inexperienced anglers who get caught out… I know several hardened rock anglers who have been tumbled into the sea in a heartbeat. Luckily the four well known anglers alluded to all survived but, to a man, they are forever changed for their hard experiences.

Rock anglers who end up in the cold sea very often don’t live to tell the tale; therefore many stories are untold and lessons unlearned. Big seas and freak waves sweeping anglers from rocks are one thing, but there is another potentially greater danger… slippage. It’s a fact that many of the rocks that are habitually fished are greasy, slippery nightmares, every bit as bad as sheet ice to stand upon, and anglers do slip and fall into the sea usually banging their heads in the process. Because many do not survive, we truly never get to the bottom of circumstances surrounding many unfortunate incidents. I also suspect that some of those that do survive a dunking are too embarrassed to admit to falling in, and might find it easier to blame a big wave. 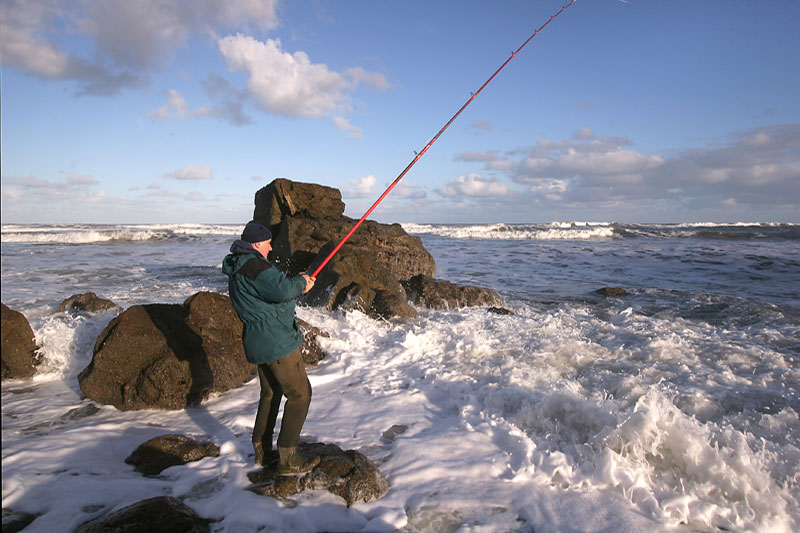 John is an angler with years of rock fishing experience under his belt, yet that didn’t prevent him slipping and falling from popular rocks at Portlethan near Aberdeen. He spent ages in the freezing water before being spotted and pulled out by rescue services pinpointing his headlamp, which thankfully stayed lit. John recovered to tell his story and owes his life as much to his excellent headlamp and floatation suit, as he does to those who fished him out. I don’t think he has fished on the rocks since however.

Treacherous underfoot conditions are every bit as dangerous as big seas and should be given due consideration. Inappropriate footwear such as wellies and trainers are potentially lethal. It is a glaring fact that the ideal rock fishing boot hasn’t been produced yet, but there are very good options that go a long way to avoiding broken bones and painful bruises at the very least. Boots with a good gripping tread and flexible sole are best. Boots with rigid soles are generally designed to accommodate crampons and are horrendous to walk any distance over rocks in. A pair of appropriate ‘two season’ boots can easily cost £100, but will provide the wearer with confidence to negotiate rocks. In my book that is a small price to pay for something that will last years if properly cared for and could well save your life. 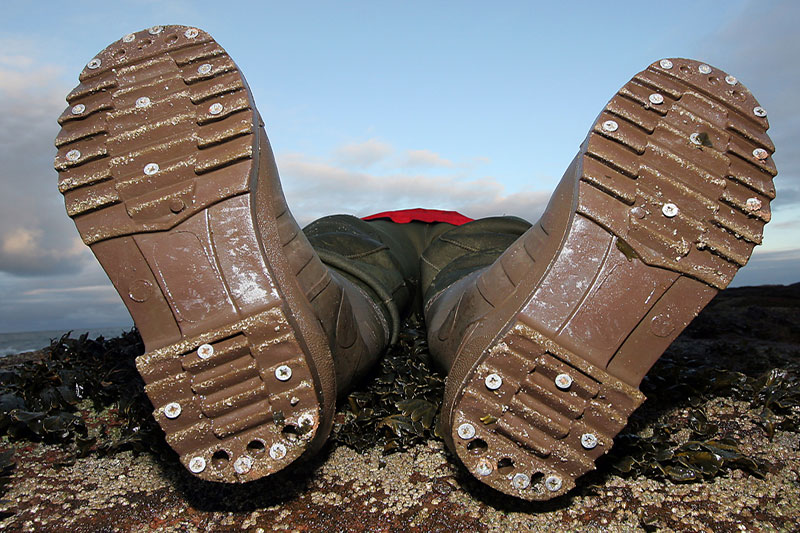 Chest-waders on the rocks are always a matter for controversial debate. I will confess to regularly wearing chesties on some marks where I might need to wade back across back-filling gullies etc, but I’ll always go for boots where the situation allows. A great tip to increase boot or wader grip is to whizz some short self-tapping screws into the soles. Dab the screw threads with a spot of Araldite before working them into the thickest parts of the tread using a cordless screwdriver. It’s a quick and simple fix that will instantly improve rock traction by 50% – try it. The studded neoprene Apollo chest-waders made by Greys are one of the best sets available to rock anglers.

Some sort of floatation clothing is essential for a fishing session on the winter rocks. Either a full floatation suit, floatation jacket or a crewsaver-style lifejacket worn on top of waterproofs should be standard policy. These modern lifejackets are extremely lightweight and do not encumber the wearer’s general movement and casting. 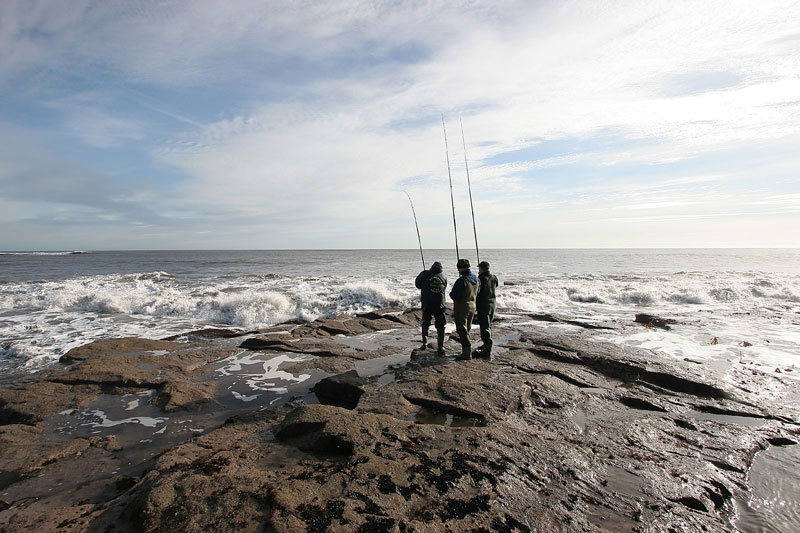 Another golden rule is never go out rock fishing alone. Many of the best rock marks are far from the heart of civilisation, and there is little chance of another human kicking around to assist should you injure yourself or worse. There can be nothing worse than falling from an isolated rock mark in the sure knowledge that not another living soul will guess your misfortune until they discover your car in the morning.

A good headlamp and a spare is imperative for night fishing. Too many anglers are happy to spend hundreds of pounds on super-dooper rods and reels, yet refuse to spend more than 10 or 20 quid on a light. The light is more important than both the rod and the reel. Throwing £200 plus at a top notch lighting set-up is not frivolous. 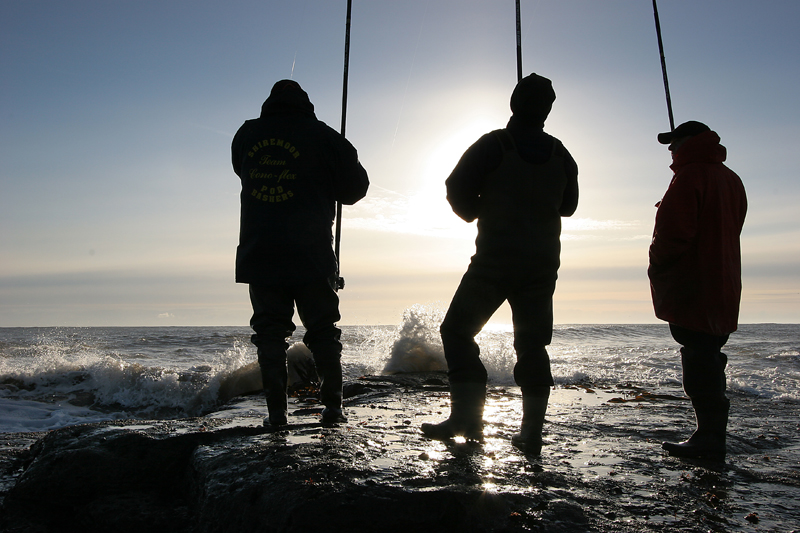 Mobile phones are the bane of my life but in this instance they are vital equipment. Make sure that the battery is fully charged before setting out, and even carry a spare battery. It is a good idea to have important/emergency numbers locked into your phone too. Always alert a family member or friend to where you are going and when you expect to return. Likewise, if you decide to stay on because the fishing is good then phone home and notify any changes of plan.